It was the war that led Henry Ishida to his best friend, Minoru Hirozawa. They met in their 442nd RCT company, and afterward, they did everything together. The two traveled to the East Coast, joined a dance club with their wives and even held joint birthday parties (their birthdays were one day apart) until Hirozawa died in 1996.

The two were more than friends. They were brothers-in-law. Hirozawa introduced his younger sister, Doris, to Ishida when they returned home from the war. The couple hit it off and married soon after meeting. When asked who’s the better dancer, Ishida, a fireman-turned-draftsman, admits, “The girls. They would lead, and we would follow.” 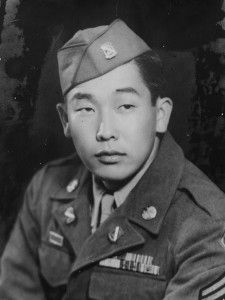 Growing up, daughter Laurie describes her dad as laid-back. But he found ways to keep her in line. As the Ishidas’ only daughter, she remembers trying to sneak out of the house when she was grounded, only to find that her dad had taken the car apart.

“He would try to be tricky and take certain things apart, but I would learn how to fix it,” she says.

Laurie and her father share a love for animals. Their ‘Āina Haina home was filled with two things: animals and boxes of negatives. Laurie says the house was like a zoo with pet rabbits, guinea pigs, mice, dogs, parakeets and chickens roaming about.

On top of that, Ishida enjoyed photography and lugged his Nikon film camera to events. The negatives piled up in the house, and her parents would often spend all day at Longs Drugs having photos developed to hand out to everyone at reunions and parties.

They also enjoyed skeet shooting. Fixing cars and shooting guns may not have been typical teenage girl hobbies—Laurie says she was the only girl at the shooting range (her mom stayed home)—but she enjoyed spending time with her dad.