The Congressional Gold Medal, presented to the 100th Battalion, 442nd RCT and MIS in 2011, is the highest civilian honor awarded by Congress.

When I asked my grandpa why he joined the 442nd Regimental Combat Team during World War II, his answer surprised me. He hoped the second-generation Japanese American, or nisei, soldiers could find better jobs and opportunities after serving in the war. 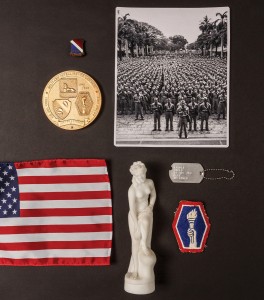 War memorabilia and souvenirs from Jayna and Aaron’s grandpas, who both served in the 442nd RCT.

Like him, more than 20,000 nisei from Hawai‘i and the Mainland answered the call of duty despite being seen as “enemy aliens” by their own country. The 100th Infantry Battalion, the first unit of mostly Japanese Americans to deploy, lost so many men in its first five months of combat that it became known as the Purple Heart Battalion. The soldiers’ comrades in the 442nd Regimental Combat Team met similar challenges—at one point, manpower in some of the unit’s companies was down to single digits. In a month of nearly nonstop combat during the Vosges campaign in France in 1944, which included the rescue of 211 men of the Lost Battalion, 160 of the 442nd’s soldiers were killed and more than 1,200 wounded.

When the war ended in 1945, the 442nd RCT, which had been augmented the previous year by the already battle-hardened 100th Infantry Battalion, became known as the most decorated unit of its size and length of service in U.S. military history. Meanwhile, nisei soldiers of the Military Intelligence Service, who served in the Pacific and Asia during WWII translating Japanese documents and intercepting messages, are credited with shortening the war in the Pacific by two years and then helping to rebuild Japan once the fighting was over.

The world knows these nisei veterans as heroes. But to many of us in Hawai‘i, they’re that and more: They are our grandpas, dads, husbands, uncles and friends. My grandpa returned home from WWII, got married, raised my mom and auntie, and worked as a meat cutter and all-around handyman at our family market, Mō‘ili‘ili Store. Others graduated from college and became politicians, lawyers, professors and blue-collar workers.

We wanted to get to know these men who helped shape Hawai‘i’s course. And while the 75th anniversary of the end of World War II isn’t until next year, we needed to capture as many of their stories as we could, now, before it’s too late.

I met with local veterans advocates, visited the 100th Battalion and 442nd RCT clubhouses, and attended military events. With the help of a handful of passionate volunteers, I found 17 nisei veterans, from 93 to 101 years old, who are still living in the Islands.

Some are well known. Others had never spoken to a writer before. Every man had a different story. I couldn’t possibly tell them all, but there were certain ones that shone through. Those tales of hope, joy, resilience and love are the ones we are sharing.

If you’re a nisei WWII veteran in Hawai‘i and would like to share your story, email jaynao@honolulumagazine.com.