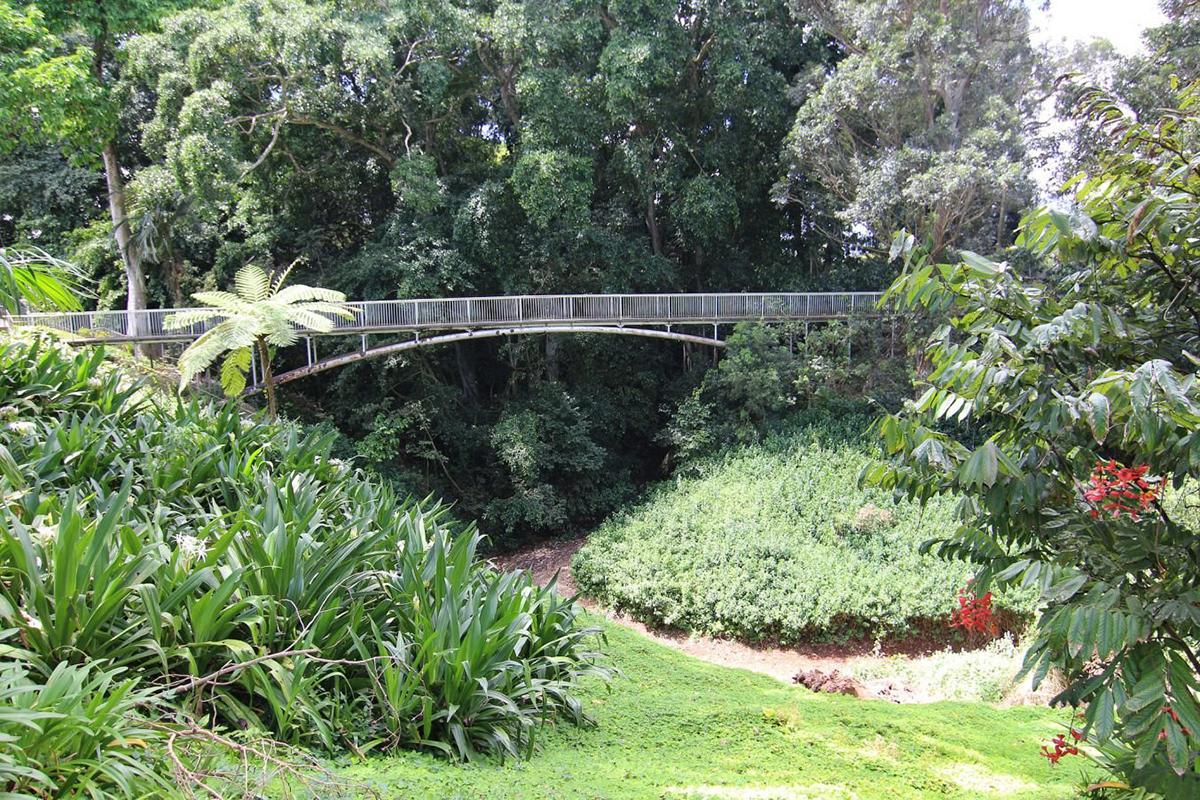 Avoid the crowd and call in an order of breakfast burritos and kim chee-studded fried rice from Rise and Shine Café in Mililani Mauka—not to be confused with Mililani Town, which has its own off-ramp. Then hop on the H-2 for the five-minute drive to Wahiawā, marked by a friendly pineapple sign and view of Lake Wilson. Just after the first curve in California Avenue, look for the 19-space parking lot of Wahiawā Botanical Garden, a 27-acre garden that started as a sugar plantation’s arboretum in the 1930s. Pack mosquito repellent for a picnic in the cool higher-elevation weather then stroll into the ravine to see native plants or visit colorful Mindanao gum trees on the shady terrace.

♥
DID YOU KNOW
In the Wai‘anae Mountains, Oʻahu’s highest peak, Mount Kaʻala, overlooks Wahiawā. Its 1,100-acre nature reserve is only accessible by a government-controlled road.

If you woke up late or just got lost amid the similar-looking Mililani houses and gave up (it happens), order a hearty old-school bowl of squarish noodles at Shige’s Saimin Stand, which just reopened its dining room in December. The town’s also home to several legit Mexican places: Taqueria El Ranchero and Barrio Café offer breakfast. 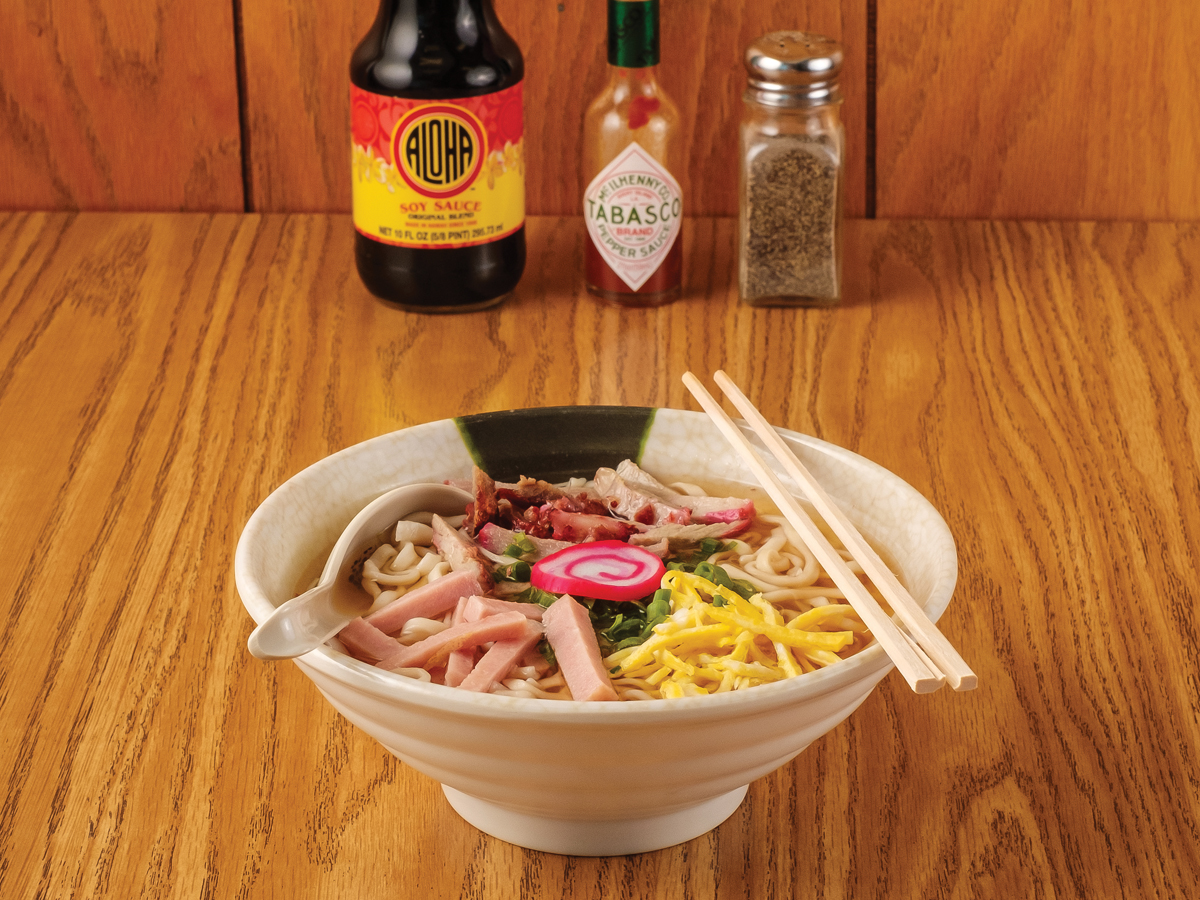 Forgo the H-2 for Kamehameha Highway en route to Pearl City. The two-lane road feels more leisurely as you pass through valleys, Mililani Town, the newly constructed Koa Ridge community and Patsy T. Mink Central O‘ahu Regional Park in Waipi‘o. As you enter Pearl City, keep right to avoid the cluster of cars turning left toward stores. Turn left on Waimano Home Road then take Komo Mai Drive until it ends at Waimano Trail. If it rained recently, you’ll find Mānana Falls at the end of the hourlong hike. (Watch for markers to avoid ending up on the ridge trail.) 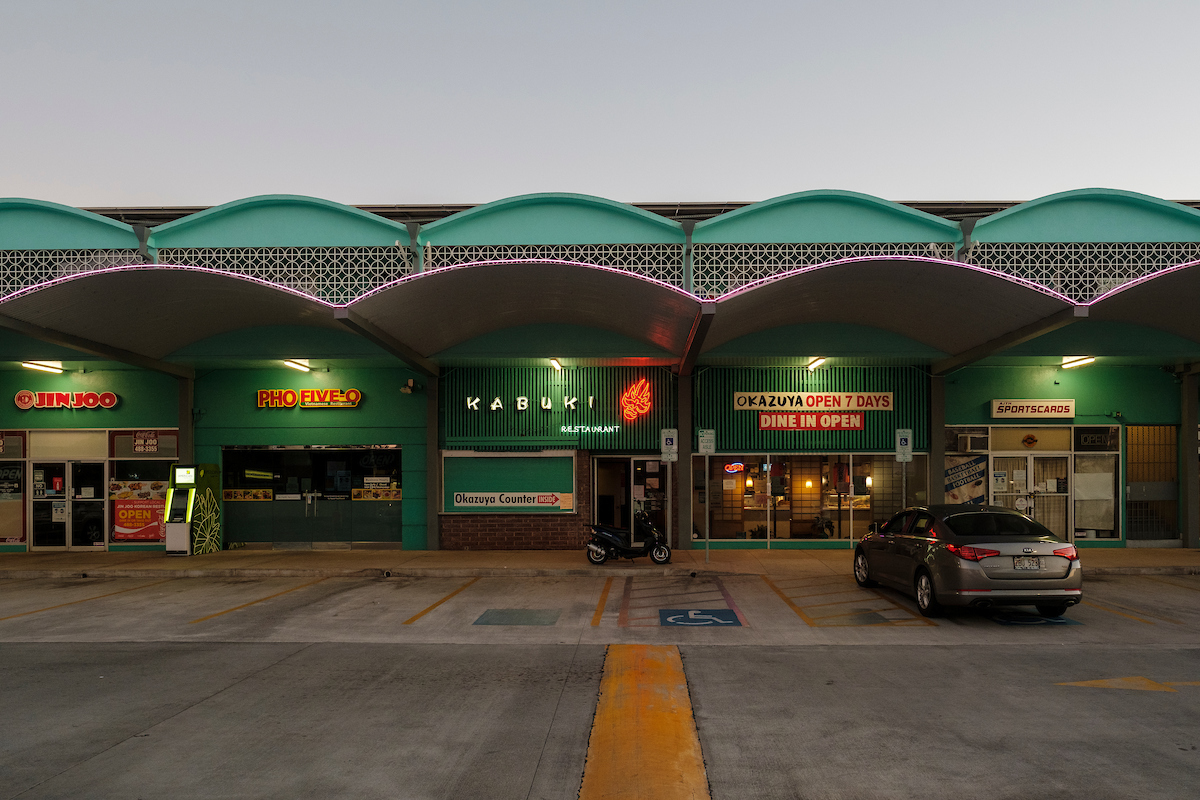 Fifteen minutes away, the arched roofline of Waimalu Shopping Center marks one of Honolulu’s first strip malls. The center, built in 1959, was added to the National Register of Historic Places in 2021. Look for giant cone sushi at cash-only Kabuki Restaurant and Delicatessen (good luck finding any after 11 a.m.), pastele at Jackie’s Diner, massive crispy gau gee at Waimalu Chop Suey or order by the number at Shiro’s Saimin Haven. A cup of shave ice—yes, it’s in a fountain drink cup—at Baldwin’s Sweet Shop is always a good idea, especially with ume syrup and ice cream. Neal S. Blaisdell Park is a few minutes away. Houseless people have taken over the waterfront pavilions, but there is lots of room elsewhere. Near the bike path, look for the Bell of Peace built by Japanese craftsmen, without nails, as a gift 50 years after the bombing of Pearl Harbor.

At last check, Moanalua Gardens and Ice Palace were still closed, and tours are still pending at the Ford Island Control Tower. But the biggest concentration of bowling alleys on the island calls. Fort Shafter Bowling Center is open to the public and offers the lowest rates. The Alley at ‘Aiea Bowl, of course, has Tasty Chicken, crunch cakes and O‘ahu’s best oxtail soup (as chosen by Frolic readers), while Leeward Bowl has eight50’s roster of whiskeys. 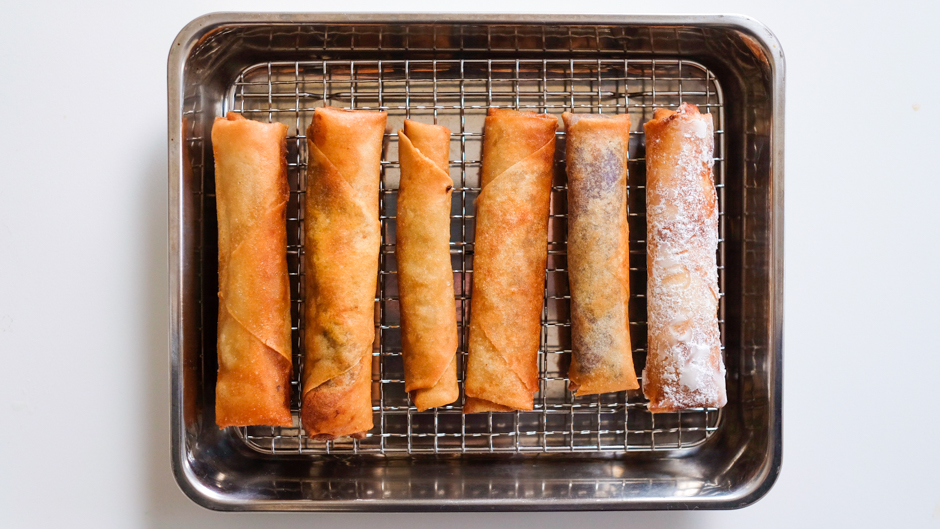 If you have time, the ‘Aiea Public Library, built on the site of the old sugar mill, has a reading area overlooking Pearl Harbor. Putt around at Tropics Mini Golf or Glow Putt at Pearlridge Center or grab some clubs and a $10 basket of balls at The Newtown Range, if it’s not closed for renovations scheduled for early this year. When you get back to the car, order dinner and head to Hālawa. J&S Lumpia sells traditional as well as pastele, strawberry cheesecake and sweet potato lumpia fried-to-order from a tiny counter across the street from Target. If you want a frozen pack of 30, you’ll need to order a day in advance. Just five minutes down Salt Lake Boulevard, the kalbi combo at cash-only Soon’s Kal Bi Drive-In is a favorite. Let the aromas fill the car on the way home.

♥
DID YOU KNOW
Between Pearl City and ‘Aiea lie the neighborhoods of Waiau and Waimalu.

9 a.m. Picnic at Wahiawā Botanical Garden, then go for a hike or a stroll.

12:45 p.m. Build your own lunch at eateries including Kabuki Restaurant and Delicatessen, Jackie’s Diner and more.

2 p.m. Drive a few minutes to Leeward Bowl, ‘Aiea Bowl or Fort Shafter Bowling Center to get a lane.