Lucky we live Hawai‘i, cuz we get some really outstanding potato chips. 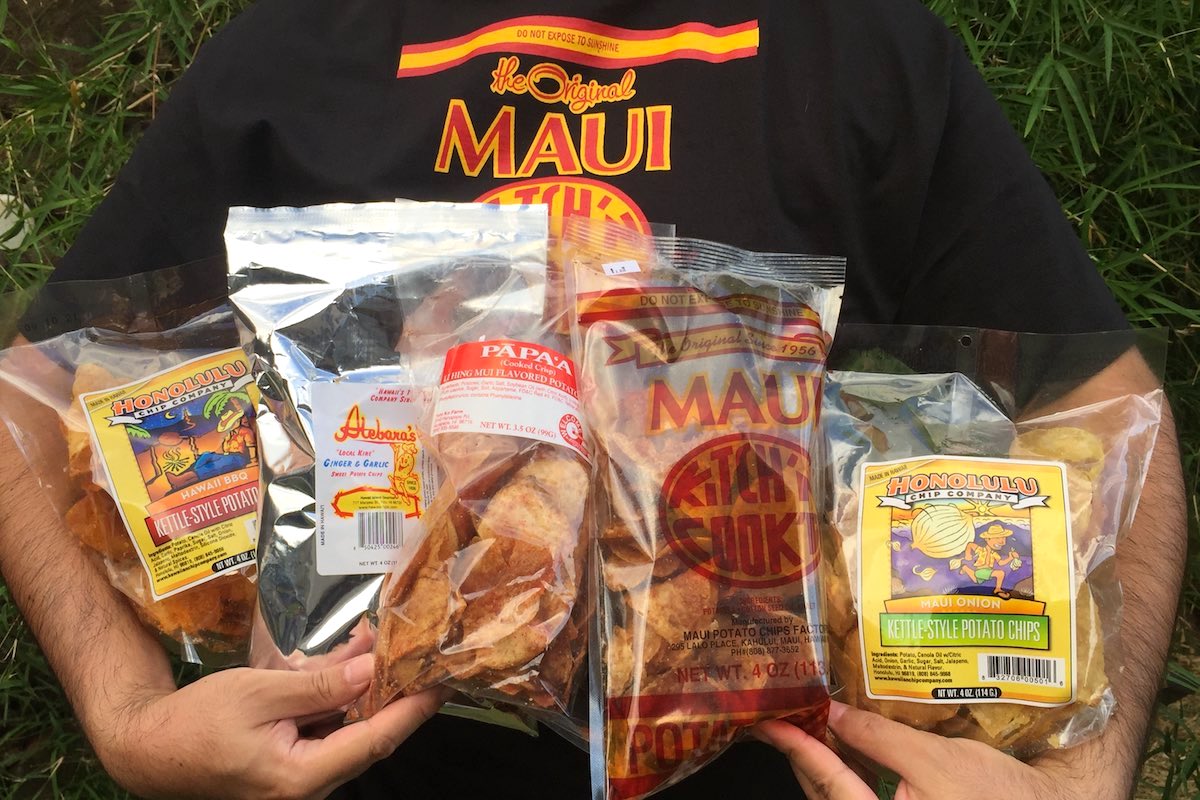 For da past couple few years da fad has been for mainstream potato chip companies for come out with all kine crazy flavors that get consumers all excited cuz dey only available for one limited time. I admit, being one potato chip connoisseur, I wuz kinda caught up in that scene for awhile, but lately I feeling like all that stuff stay played out already. Cuz I came for realize, even if da flavoring taste good, da chip itself always going be just all right.

Lately I been finding myself craving bettah quality chips. So we really lucky we live Hawai‘i, cuz we get some really outstanding potato chips. And da coolest part is that O‘ahu, Maui, Kaua‘i and Hawai‘i Island all make their own distinct kine chips!

Below get my personal favorite from each of these islands. 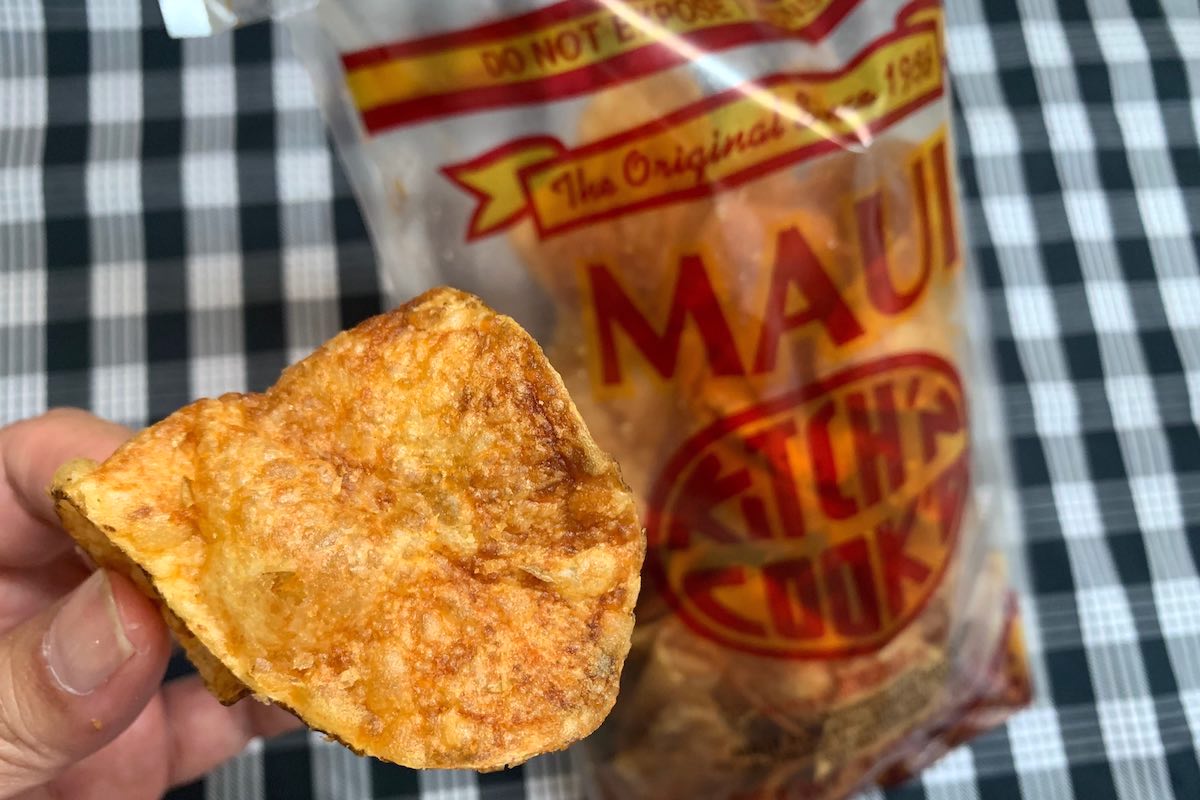 Get one reason why we tell Maui nō ka ‘oi. Photo: Lee A. Tonouchi

Maui Potato Chips stay truly legendary. Dey put Maui on da map for potato chips, making ’em famous worldwide. In 1984 when second-generation owner Dewey Kobayashi passed away, his obituary said, “He ran his family business using mainland potatoes and a recipe his parents learned while they were interned on the mainland in World War II.” And dis wuz in da New York Times!

You ever wondered how come Tim’s Cascade Chips in Washington makes Hawaiian Kettle Style Potato Chips? Cuz everybody like try get one piece of Maui Potato Chip’s cachet action das why.

I grew up on O‘ahu but my faddah wuz from Maui so he always instilled in me how Maui Potato Chips stay da best chip. Maui people tink everyting from Maui stay Maui nō ka ‘oi, but who can argue when it’s true? My faddah wuzn’t one for splurge, but I remembah him occasionally buying some for us from Star Market back when it came in that big clear bag with two smaller bags inside. I remembah ’em as little bit greasier and little bit thicker than most chips. And da fact that da ting wuz cut all uneven and some came out little bit ko-ge, or small-kine burnt, that all added to its artisanal charm. It hands down beat-ed all oddah chips in terms of da crunch factor. So ono. So addicting wuz and still is! I wen sample some recently and still taste-es da same aftah all these years.

Unless you live Maui, da ting kinda hard for get. Cuz no more on O‘ahu. Of course you could pay uku-dozen dollars and get ’em off Amazon, but why poho your money when you can just do ’em da old skool way. Just do ’em like how I did ’em and call up da Kobayashi family direct and place one phone order and have ’em mailed to your home. Da only ting is you gotta pay shipping and dey no take credit card or any kine new-fangled form of electronic payment. Venmo? What that? Payment via cashier’s check or money order stay preferred. 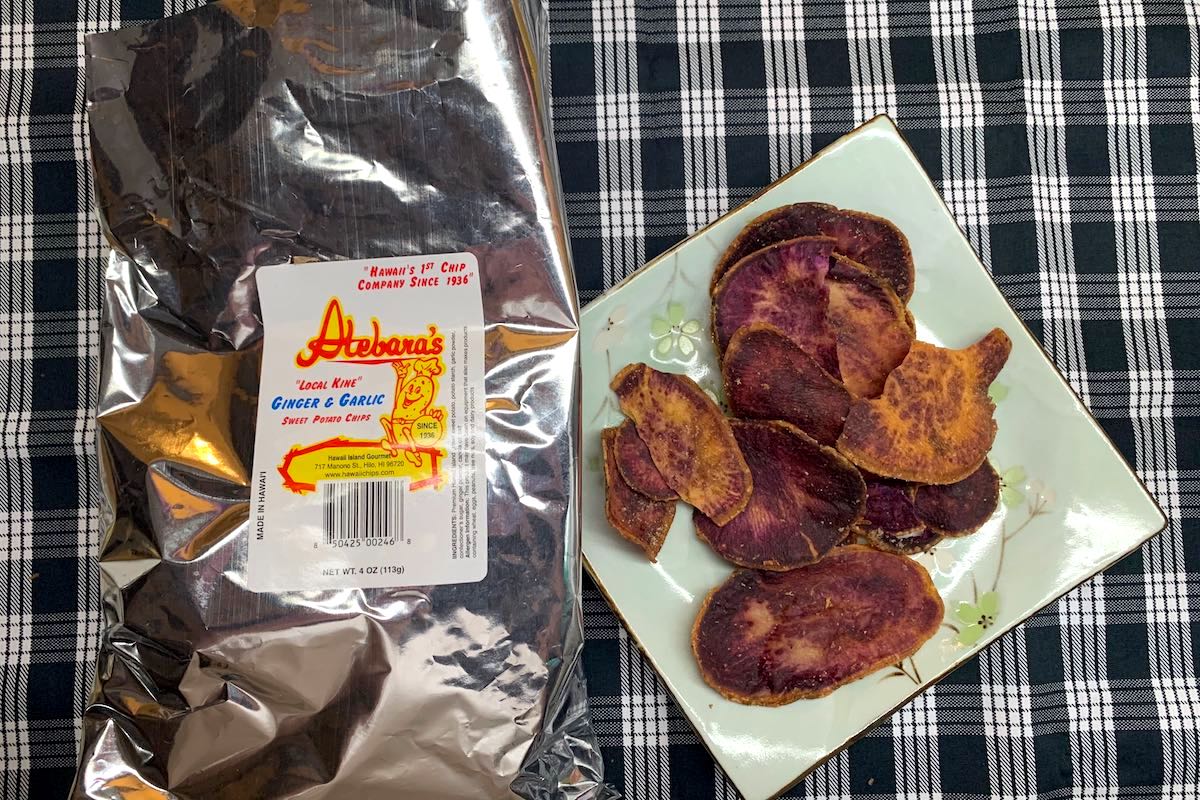 Some people like Kona Chips. Some people like Atebara Chips from Hilo. For da longest time I wuz undecided, until my cousin Karen Padilla introduced me to Atebara’s ginger and garlic sweet potato chips. She gave me some cuz she figured it’s purple potato so must be Okinawan and since I Okinawan, I would like it. Das so stereotyping, yeah. But what can I say? She wuz right.

Originally for this writeup, I wuz just going include potato-potato chips, but Atebara’s purple sweet potato one stay so unique and amazing that I just had for include ’em. On top their website it says Atebara wuz da first chip producer in Hawai‘i, founded in Hilo in 1936. Having been around so long, dey really know our palate: Dis chip stay garlicky, gingery, sweet, salty and crispy. Hawai‘i local people, we love ginger, garlic and sweetness in a lot of our cooking, so da taste profile stay so perfect. I dunno who thought up dis chip combination, but it’s so clever and it makes so much sense.

Sad news is Foodland used to bring ’em to O‘ahu. Bad news is I nevah see ’em long time so I wen contact Foodland and dey said dey no bring ’em in no more. I mail-ordered mines from bigislandlocavorestore.com, but if you on top Hawai‘i Island you can check out da Atebara Chips store. 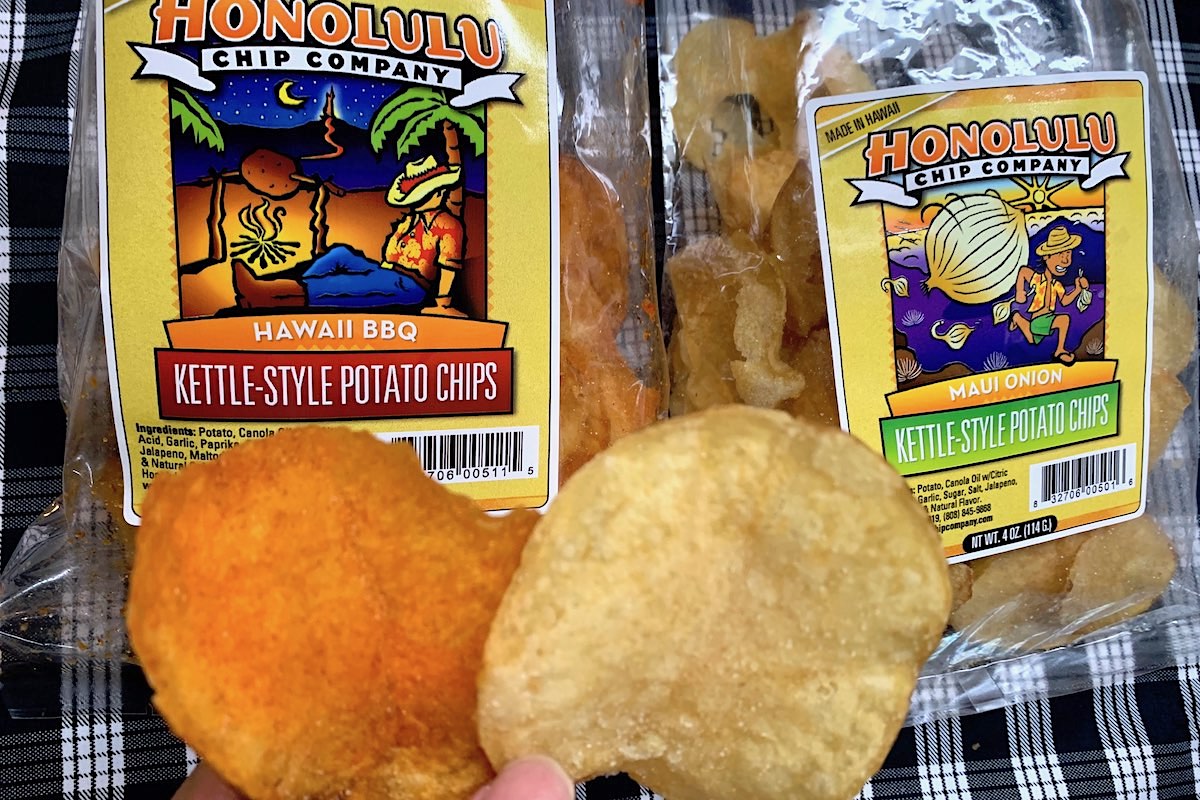 Since 2000, Hawaiian Chip Co. wen go build their reputation on their sweet potato and taro chips using trans-fat-free canola oil. And I know dey know one ting or two about ‘ulu or breadfruit chips too, cuz when I wrote one Frolic piece about Hi Five ‘Ulu, da owner Kanani Keliipuleole told me dat when she had for expand her ‘ulu chips frying capability, Jimmy Chan, da man who owns Hawaiian Chip Co., became her savior by agreeing for take over manufacturing for her. Kanani wen tell, “Before he agreed to do it, I tried EVERYONE I could possibly think of. They all turned me down. Not enough time, not sure how for make them, not the right kind of equipment. I think Jimmy took pity on me. He’s the last of a dying breed of business owners in Hawai‘i, looking out for the small guy. The advice I’ve received from him over the last couple years is priceless.”

I almost nevah notice da name change up in da logo. Das weird, ah? I wonder how come dey wen change their name to Honolulu for only their potato chips.

Getting back to these chips. Dey come in three flavors: original, Hawai‘i BBQ and Maui onion. While da regular stay pretty good, I no could decide if I like da Hawai‘i BBQ or Maui onion mo bettah. Tie-tie, brah. Da Hawai‘i BBQ one get some mild heat. Da Maui onion one stay really flavorful. Both stay lightly salted and cut and fried to perfection. No mo no broken or overdone chips hea.

And these taste waaay mo bettah than da “main”land ones from Hawaiian Kettle Style Potato Chips. So be sure for support local and buy from Honolulu Chip Co. I asked dem what stores dey sell ’em at cuz I wuz having hard time finding ’em. Dey said for now you can get ’em online at their website and at their Hawaiian Chip Co. factory store. Plus Diamond Head Market & Grill and Wholesale Unlimited started carrying ’em too. #madeinhawaii 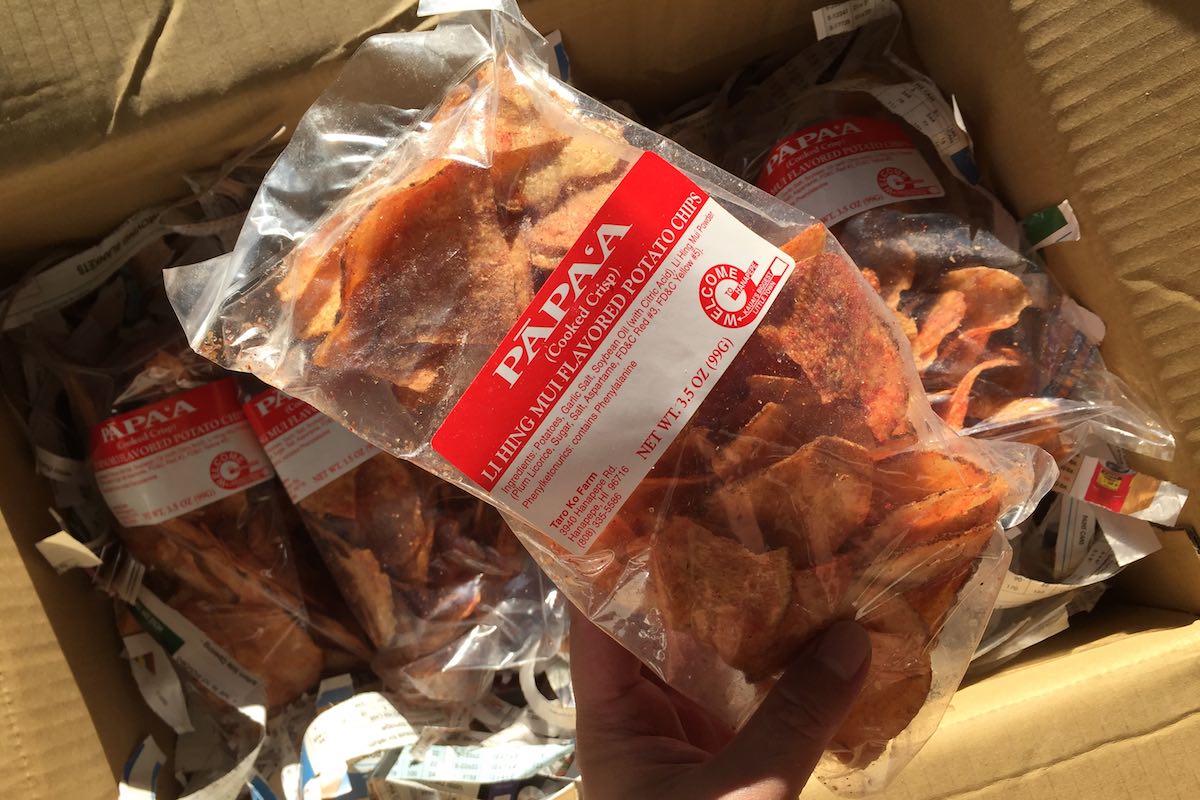 Everybody knows about Taro Ko’s taro chips, but what about these bad boys? Photo: Lee A. Tonouchi

Small kid time, my Kaimukī grandma used to get care packages from Kaua‘i cuz her sister dem had one taro farm so we’d get one box Taro Ko Farm taro chips in da mail Christmastime every year. My grandma would ask if I wanted, but usually I would take one bag just for go give to my oddah grandma. Cuz when I wuz young I nevah like taro chips. Dey reminded me of da two times my grandma took me Kaua‘i for visit da taro farm. I remember my Uncle Shopi playing sanshin and telling ghost stories. Like da one about one night he thought he saw outta da corner of his eye one cow in da taro patch, but when he turned for look, wuz one giant pig. Kamapua‘a!

When I got older, I started for like taro chips so whenever my grandma got boxes I would take one bag for myself too. Den in college time someting life-changing happened. My grandma wen open da box and said oh, get one new kine chip. Wuz one li hing potato chip. I ate that and I wuz hooked.

SEE ALSO: How Flying Saucers from Kaua‘i and Maui Landed on O‘ahu

Nowdays dey so busy dey no even answer da phone. Dey stopped answering cuz too many people would call to place orders and dey no more time for be talking on da phone.

So I wuz curious if Taro Ko still made their li hing potato chip. Cuz once my grandma’s sister passed away, and my grandma passed away, I kinda lost that connection to my … I dunno, second or third cousin, Dale Nagamine, who runs da operation now. But Hawai‘i is such one small place. Turns out my good friend Kent “Yoda” Sakoda, he grew up Hanapēpē on Kaua‘i and his mo’ handsome braddah Stanley hangs out at Taro Ko Chips. Kent said that Stanley just helps out and drinks beer pau hana time. He’s not one paid employee or anyting. So since no mo no way for reach Taro Ko unless you physically go there, Kent wen go ask his braddah for go tell Dale that his cousin Lee wanted for order some li hing mui potato chips. 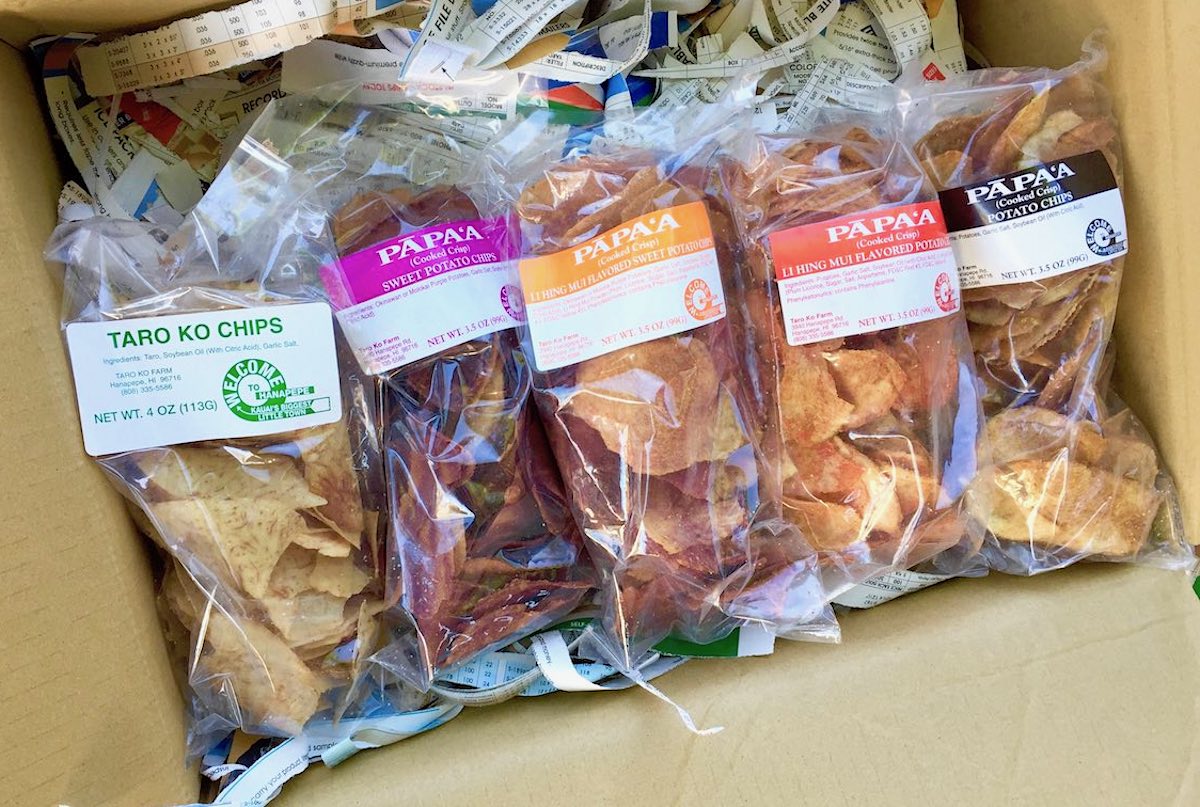 And so my cousin Dale sent me dis box and I wen open ’em up for see if it’s still as good as I remembah. And da li hing mui potato chips, it’s salty, it’s sweet, it’s sour. It’s all da taste-es in one. And crisped to perfection. I hoped wuz going be as good as I remembered, but turned out for be even bettah, brah.

So da question is, how can YOU score some of these? Well, get two ways. Either you go Kaua‘i and visit da Taro Ko Farm store in Hanapepe. Or you gotta know somebody on Kaua‘i who’ll pick up some for you and mail ’em.

Pidgin 102: Should Pidgin be Standardized in Writing?