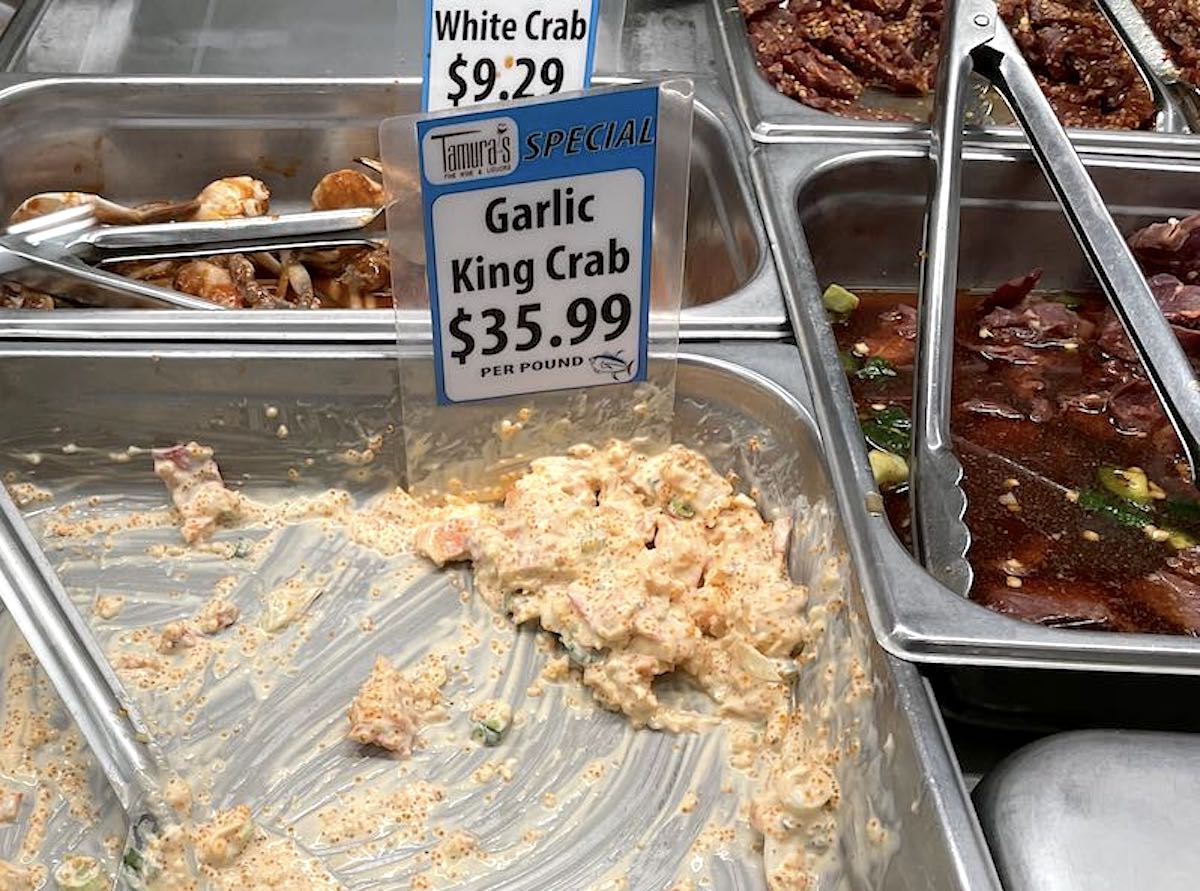 I actually went Tamura’s Fine Wine & Liquors for buy awamori for make Okinawan rafute when I wen glance at da poke counter. Das when I saw one poke that wuz $35.99 a pound and wuz almost gone! I had for investigate, cuz dis wuz da most expensive poke I eva seen.

When I saw it wuz Garlic King Crab Poke, my mouth watered and I had dis really random realization. In dis moment, staring at da crab through da glass that separated us, I learned someting about myself.

It’s funny cuz we tease our friend Daris Aoki cuz she fully loves da candy Rolos, but she absolutely hates peeling da wrapper off of each Rolo so she refuses for buy it. Das why we unwrapped one whole package of Rolos and put ‘em all in one Ziploc bag as part of her birthday present one year. I know, she get such good friends, yeah.

So as I wuz looking at dis king crab poke, I realized … I … am … just … like … Daris Aoki. Cuz I really like eating crab, but I hate getting ‘em outta da shell. So I pretty much only going eat crab if somebody cracks all da shells and feeds da ting to me. And da last time that happened wuz when my faddah fed me some of his crab meat when I wuz 10 years old.

So I wen go ask da guy at da counter if had enough Garlic King Crab Poke for make one quarter pound. And turns out had just enough. I took ‘em as one sign that dis wuz meant to be, meant for me, baby!

Ironically if da price wuzn’t so crazy high, I probably wouldn’t have given ‘em one second look. Wuz like sticker shock to da max, li’dat. I wuz curious if my poke connoisseur friends seen pricey kind poke li’dis before. So I asked Jason Chin and he said, “The most expensive I seen is probably da Tamura’s king crab one.” But, “It’s a fair price since it’s king crab.”

Pre-pandemic time, back when we used to have family gatherings, my poke expert cousin Kevin Tonouchi, he wuz always responsible for bringing da poke to our potlucks. So I asked him about dis one and he said he nevah saw anyting ova $30 a pound before and he added, “I would not buy any poke if it is more than $30.” In fact, that seemed to be da threshhold for what most poke people I know wuz willing for pay. Once it goes ova $30 per pound, most of dem tap out. 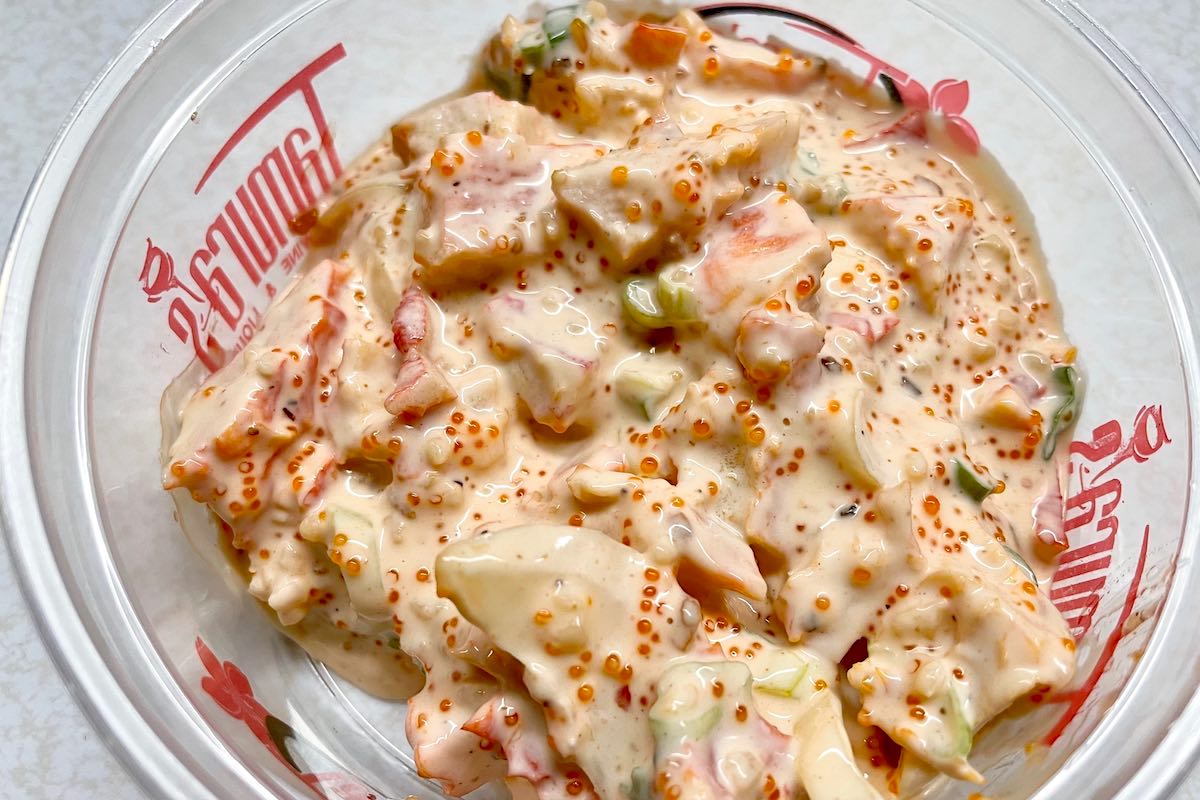 When we got home I no could wait for sample dis special treat. Look like da ingre-da-ments wuz garlic, king crab, green onion and tobiko, all in one spicy mayo sauce. I wuz tinking, dis bettah be some unreal kine good poke. I wuz also starting for have some doubts, but. Would I even be able for taste da crab or what?

An’den I tried it. All my worries went away. Wuz totally worth! Could definitely tell wuzn’t no fake kine crab. Da texture wuz firmer. And even though wuz saucy, could still taste da king crab. And could taste da garlic. I love garlic. OMG, dis wuz sooo good. I tink dis wuz da slowest I eva ate anyting. I knew I only had little bit so I wanted for make ‘em last.

When I posted one picture of Tamura’s Garlic King Crab Poke on top my Facebook, I found out dis poke already get a lotta fans. I also found out that dis poke stay small kine abunai-dangerous, brah.

My FB friend Ray Mier said he wuz like me. He saw ‘em at Tamura’s and he just wanted for sample. So him too, he just bought quarter pound. Den he went home and ate ‘em. Wuz so ono that on that same day he went back! And he bought more! Dis time he bought ONE FULL POUND! Too funny.