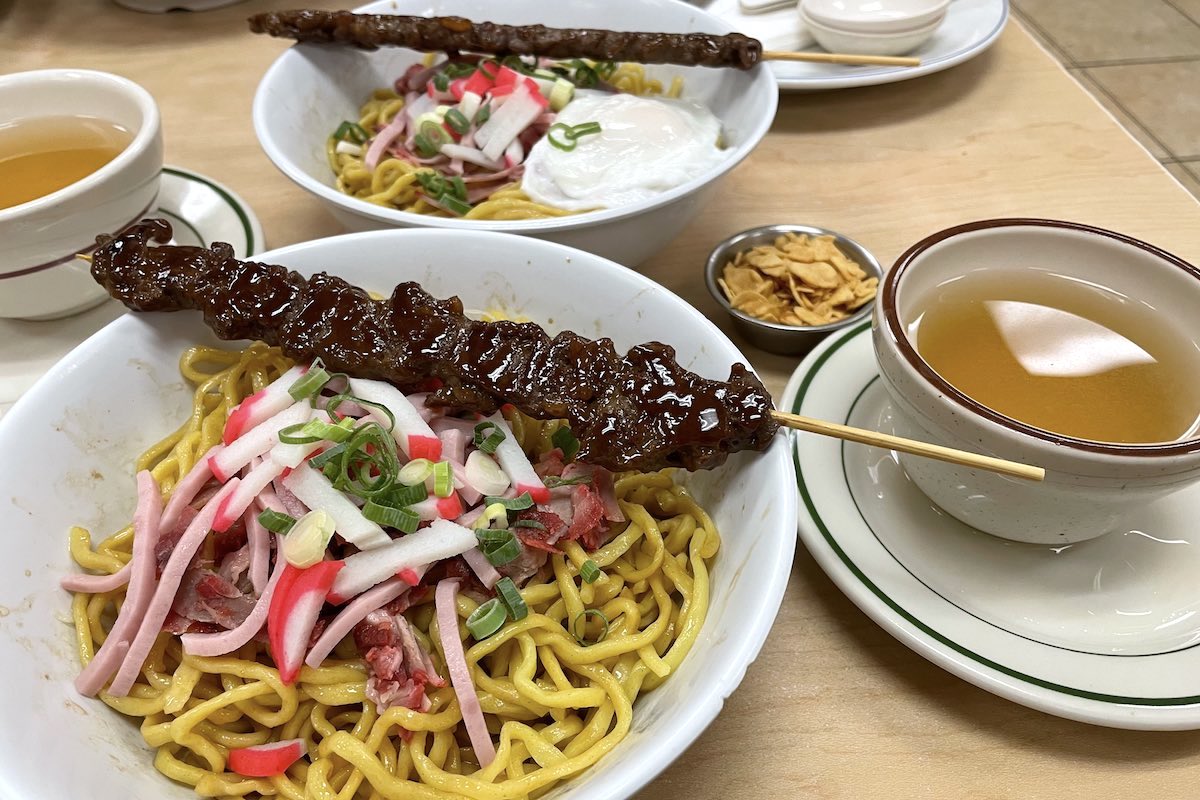 My first encounter with dry mein wuz on Maui at da iconic Sam Sato’s. I had nevah encountered dry mein before, so I was confused when da noodles came with one separate sauce. I knew their dry mein wuz supa-famous, but if I put sauce on da noodles, wouldn’t I be making it not dry?

So naturally I wen ask da waitress, “What I supposed to do? Do I just dip ’em in da sauce? Or do I pour da sauce all ova, like gravy?” She looked at me like, can tell dis guy not from Maui, brah. An’den da saucy waitress said, “Up to you, honey,” and she walked away.

That wuz many years ago. So when I heard Shiro’s Saimin Haven in Waimalu wuz launching their own dry mein noodles in May, I wuz curious how come Shiro’s, known for offering dozens of different kine saimin variations, finally decided for get in on some of that dry mein action.

Bryce Fujimoto, da VP and oldest grandson of Mr. Shiro himself Franz Shiro Matsuo, said it’s kinda been in da back of his mind for one long time. Cuz for years his goodest friend who goes on business trips been telling him about how popular dry mein is on Maui. And customers would ask every once in awhiles if Shiro’s wuz ever going put dry mein on their menu.

Turns out, wuz da pandemic that finally made it happen.

Braddah Bryce wen explain how Shiro’s dry mein wuz one “partial solution to our severe labor issues and longer wait times. The goal was to give our fry cooks a break and lean on our saimin cooks a little more. I believe Sam Sato’s dry mein was always a fan favorite, but it became [even more] popular when they shut down the majority of the sit-down restaurant. It’s good for them and any other eatery that has found a way to survive. Times are changing and we need to adjust with it.”

So dat wen explain da timing. But how come Shiro’s decided for collab with Sun Noodle on dis? Cuz Shiro’s get their own noodle factory. Did da pandemic close down their factory? Cuz why wouldn’t Shiro’s just make their own dry mein noodles, right?

Braddah Bryce reassured me that Shiro’s still produces their own saimin noodles at their Five Star Noodle Factory. Basically he said: “We did not make our own [dry mein] noodles because of severe labor issues. Also Sun Noodle has always been a reputable company. We have a very good relationship with [founder and CEO Hidehito] Uki-san and his family. The issues that the industry went through during COVID just brought us closer together. There were times when we were in a bind and reached out to them and vice versa.” 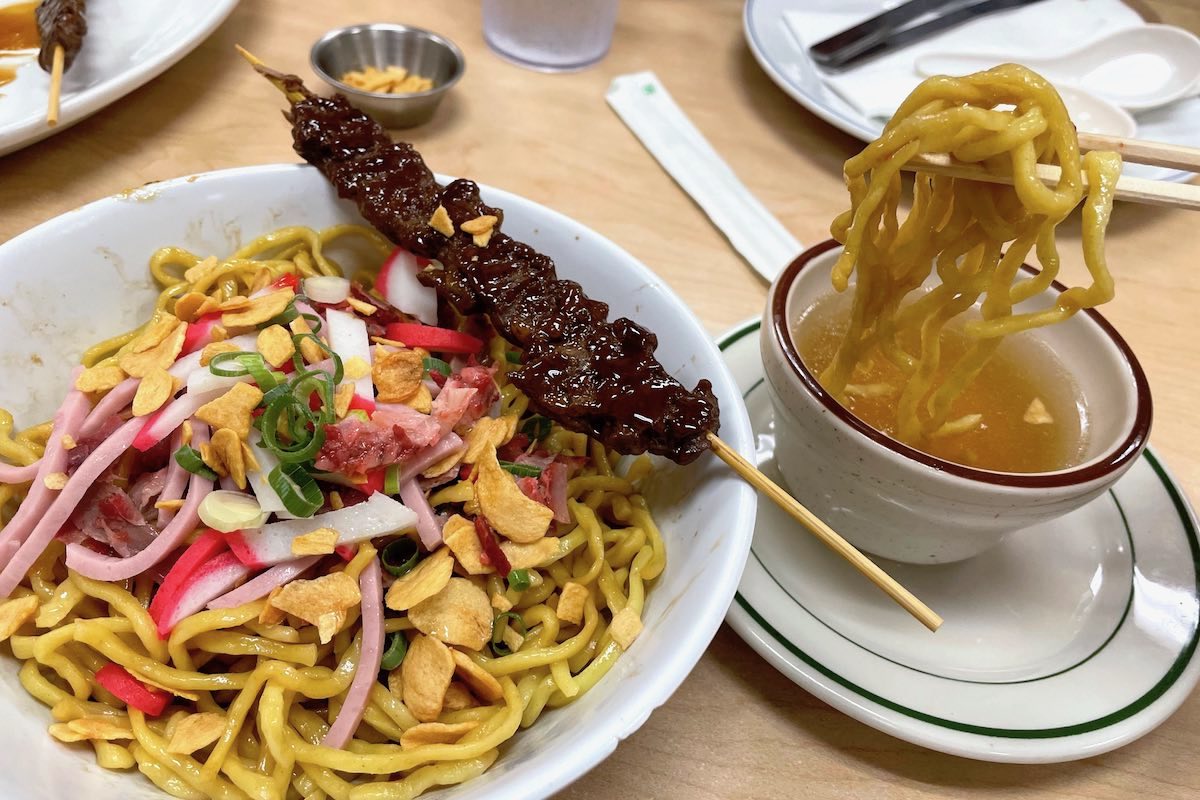 Finally came my chance fo try da dry mein. Upon closer inspection I found da noodles wuzn’t as “dry” like how da name makes it sound. Da bowl of liquid that I had been calling sauce all dis time is actually called da broth. And I love da fact Shiro’s stay calling it da “dipping dashi broth” cuz it explains very clearly how you supposed to use it!

I really like these noodles. Dey thicker and chewier than regular saimin noodles. “A different type of flour” is all Bruddah Bryce would reveal. When cooked to perfection, dis dry mein noodle soaks up all da flavor of da wet sauce, dry sauce and da dipping dashi broth. It’s like you activate its powers when you put ’em in da dipping dashi broth. It’s not greasy like fried noodles, so it goes down cleaner. It’s quite magicals.

As for da secret of Shiro’s dipping dashi broth, Bryce said it’s not secret. It’s just da dashi dey use for all their saimins. But what a dashi it is! Shiro’s get my favorite saimin broth. Their broth so distinctive: I found out it’s kelp, bonito and little bit, sukoshi kine clam.

SEE ALSO: Here’s Why Saimin Is So Good

Every order of dry mein noodles comes with one old skool teriyaki meat stick, all for $9.95. For one additional cost you can get stuff like dried garlic chips or one poached egg on top. Currently da dry mein stay only offered at Shiro’s Waimalu location, but dey working on training da people at their ‘Ewa location so dey can start selling ’em dea too.

Shiro’s dry mein wuz originally intended for be one limited time collab with Sun Noodle, but Bruddah Bryce says da ting “has progressively gotten more and more popular. It currently is a special, but I think it will be a permanent item.” I tink it’s winnahs, and I glad that people agree!

I had one last supah-tough question for Bruddah Bryce. So how does Shiro’s dry mein compare to Sam Sato’s? Bruddah Bryce reveals, “My friends give me a lot of flack about this, but I have never tasted Sam Sato’s dry mein noodles fresh. I have tried it from a customer who brought us some samples, but that was after a plane ride. I do not feel it’s fair for me to comment on Sam Sato’s dry mein until I taste it freshly made.”

So until da busy VP get time for go visit Maui, all he going say for now is “We definitely were not the original creators of dry mein, but it works for the Maui folks, and this is our version.”

I tink so da ultimate success might come later on, when Maui people visiting O‘ahu start buying Shiro’s dry mein for bring ’em back home to Maui. That would be too funny. #nomonomoono