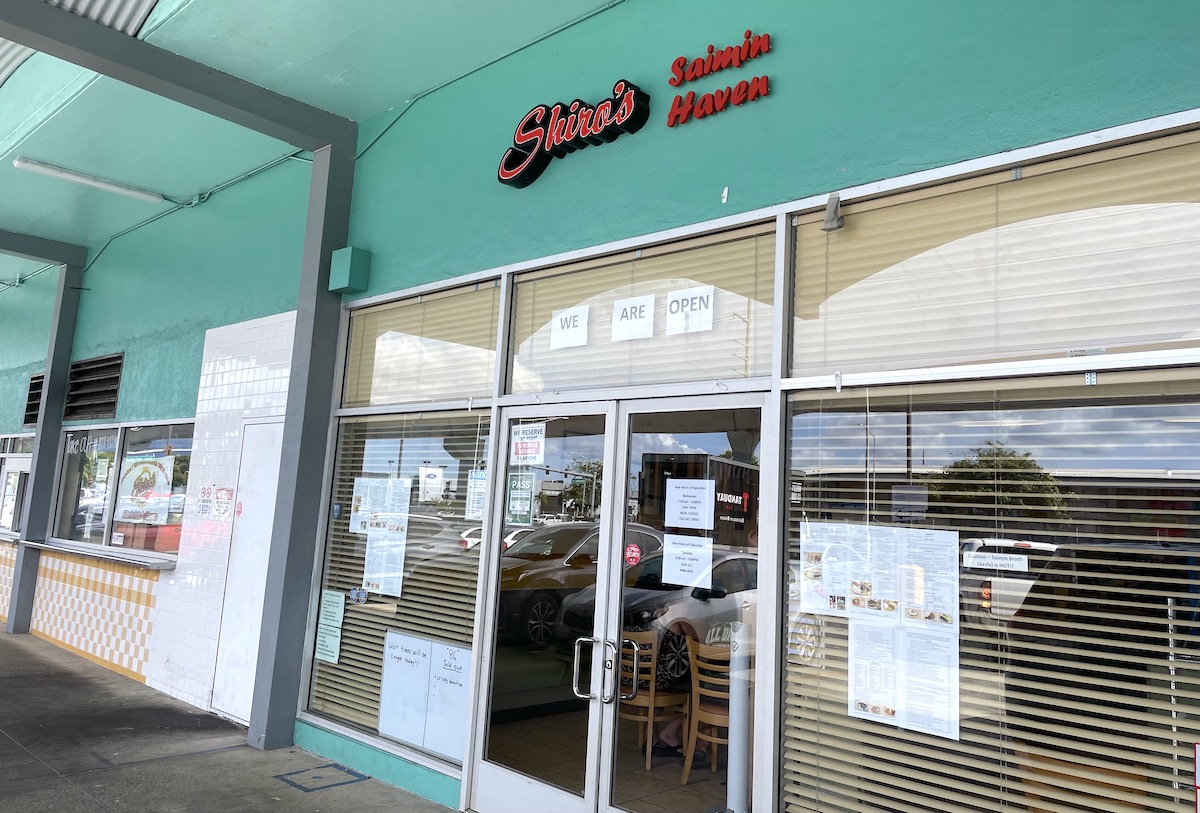 How many friends will stick with you?
There’s many, when you are down, will say adieu.
So few will be there through thick and thin.
To them it doesn’t matter if you lose or win.
These are the friends to be truly treasured.
In words then cannot be measured.

Das one of da many life lesson poems that Franz Shiro Matsuo penned. He wen open up Shiro’s Saimin Haven first in ‘Aiea Bowl in 1969, den in 1971 he wen move to da current location at Waimalu Shopping Center. Get one noddah location now in ‘Ewa Beach too. Long time ago used to get all of Mr. Shiro’s poems written by hand all thumbtacked to da wall. Over time da paper came brown and da ink faded, but I always thought that wuz part of da charm. When dey remodeled dey printed out his poems with fancy backgrounds and put ‘em in picture frames. His words of wisdoms continue for inspire new generations of customers. 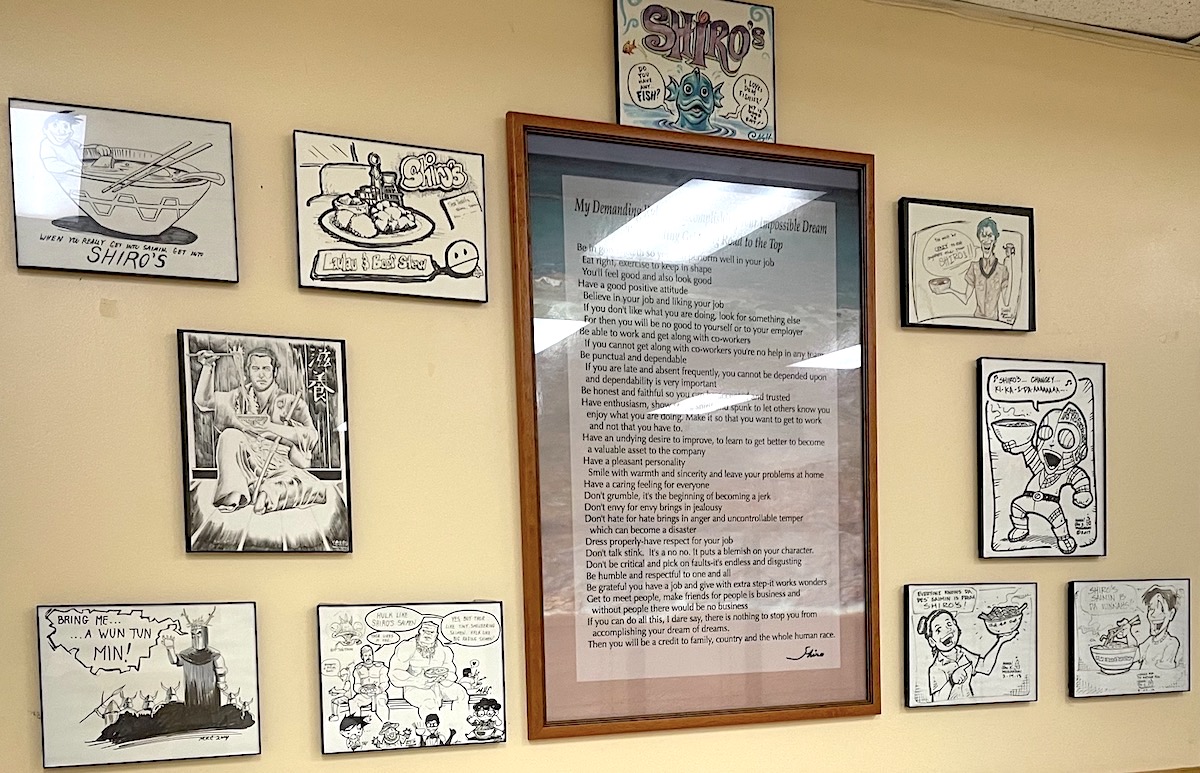 Shiro’s mission was for elevate saimin from one snack food to one complete meal in itself. It’s hard for comprehend now, but it says on top their website that Shiro wuz da firstest for introduce vegetables into saimin, not to mention all kine oddah toppings. Most famous is all his ethnic kine creations, like da No. 24 Filipino Saimin that comes with pork adobo, da No. 20 Chinese Saimin that comes with Chinese roast pork, and da No. 22 Korean Saimin that comes with barbecue short ribs and kim chee. And den get da saimins named aftah famous celebrities like da No. 55 da Ron Mizutani, da No. 57 da Jesus Salud, or da No. 59 da Joe Moore which comes with roast duck. (That one always puzzled me, like why not put duck in da Chinese Saimin? I guess Joe Moore loves duck!) So amazing how da staff knows all da ukuplanny numbers by heart. 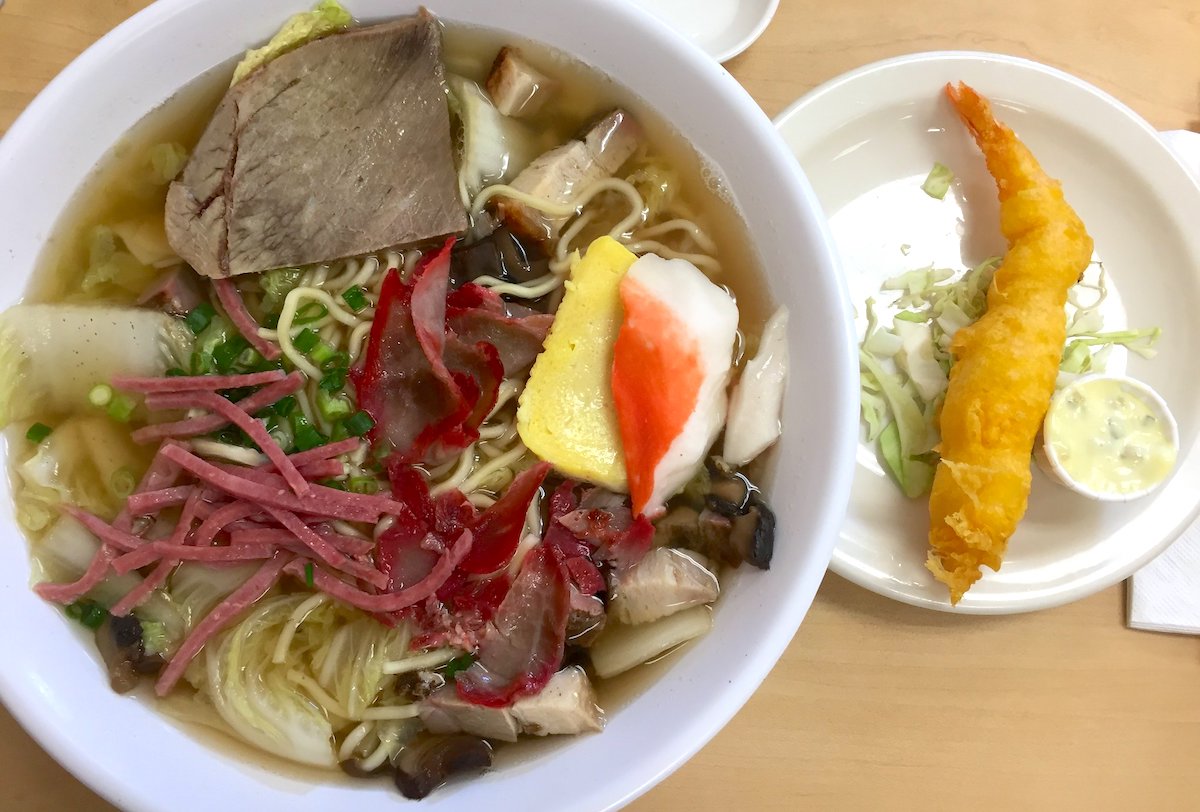 Though Shiro’s stay known for having dozens upon dozens of different kine saimins, dey also serve all kine breakfast, lunch and dinner foods too. Dey get all da local staples like Hamburga Steak, Chicken Katsu, Pork Adobo, various Hawaiian Plates, and Loko Moko (yeah, he spells ’em li’dat). But why get one Loko Moko when you can get Shiro’s Deka Boko Loko Moko! Try say that 10 times fast. That one get CHREE hamburga patties, two eggs and gravy on rice.

SEE ALSO: Dis Is How Shiro’s Saimin Got Its Dry Mein On 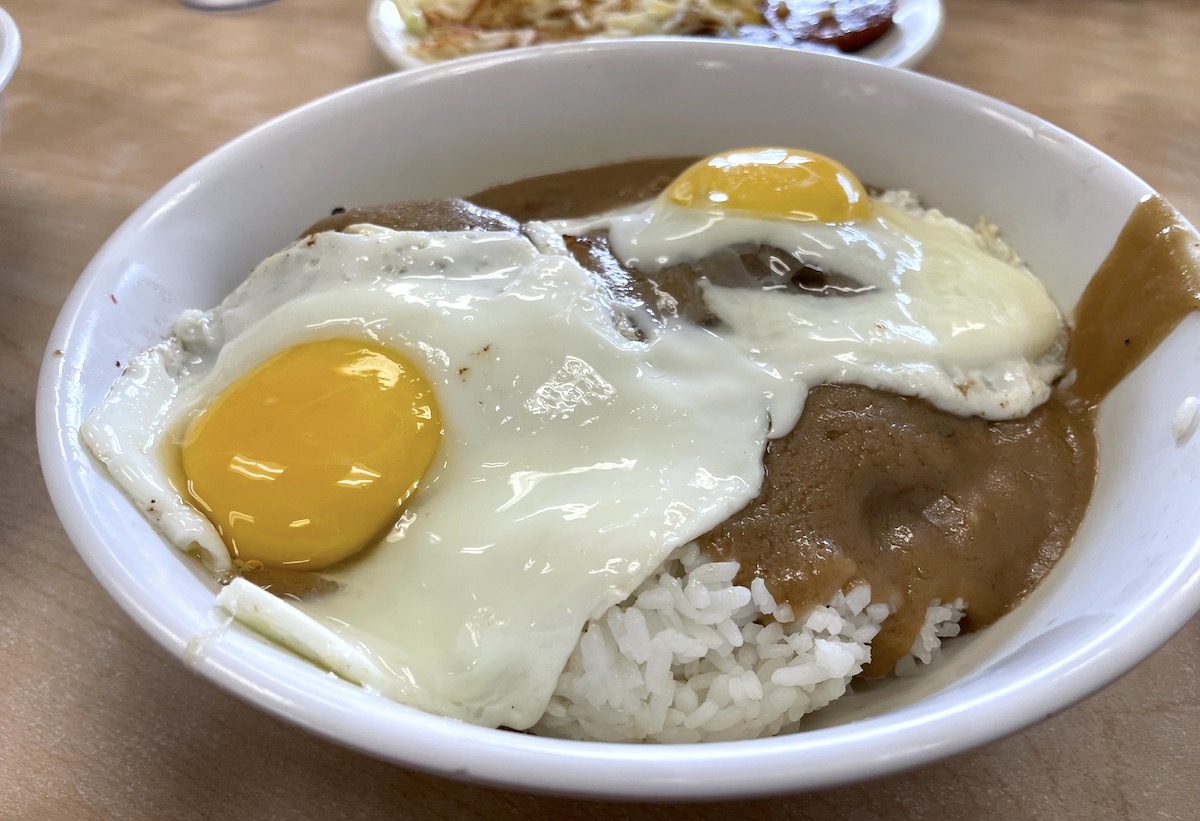 I still love his playful wording that dey smartly decided for keep on top da menu. Like how Mr. Shiro wrote “Shiro’s Original Hula Hula Chicken (It’s Teriyakking Good!!)” or da “Chop Along Steak (Faster than Hop Along).” My favorite one is “Shiro’s Original Local Boy Beef Stew (With Meat Inside!!).” My faddah had to explain how Mr. Shiro wuz dissing da “beef” stews from oddah restaurants that hardly had any beef. 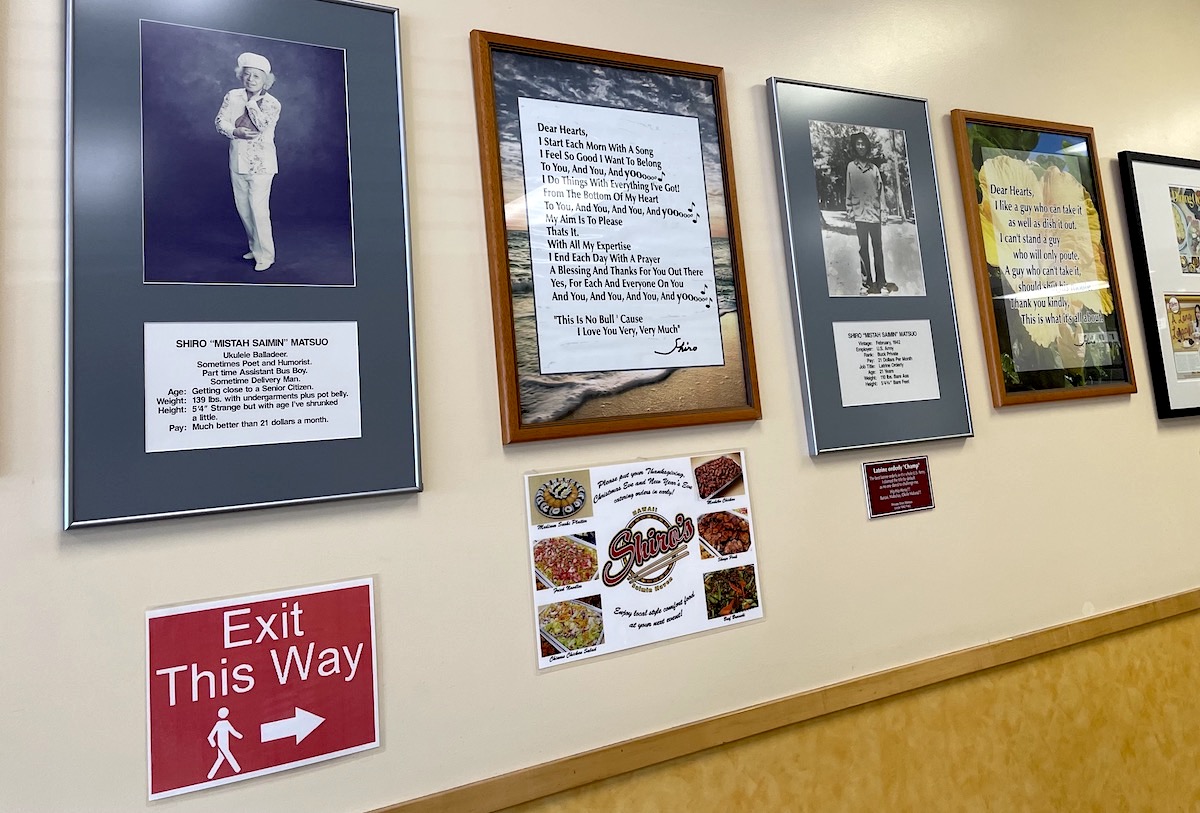 My faddah wuz cool like Da Fonz whenever we went to Shiro’s. We went so often that da hostess knew he wanted da corner booth by da register or da booth by da kitchen. If we saw one red Pontiac Sunbird in da parking lot, that meant we wuz probably going see Mr. Shiro sitting on his stool eating at da counter, back when dey used to have one coffee counter.

Family legend has it that when we catered my two years old birthday party from Shiro’s, da food wuz delivered by Mr. Shiro himself. He happened for bring along his trusty ‘ukulele, so impromptu-kine when he found out wuz my birfday, he joyously sang Happy Birthday to me. My relatives stay so old dey no can remembah da names of half my cousins, but yet dey clearly remembah that day. Dey be all like, “Lee-boy, you no remembah? How come you no remembah?!!” Uh, cuz I wuz two. 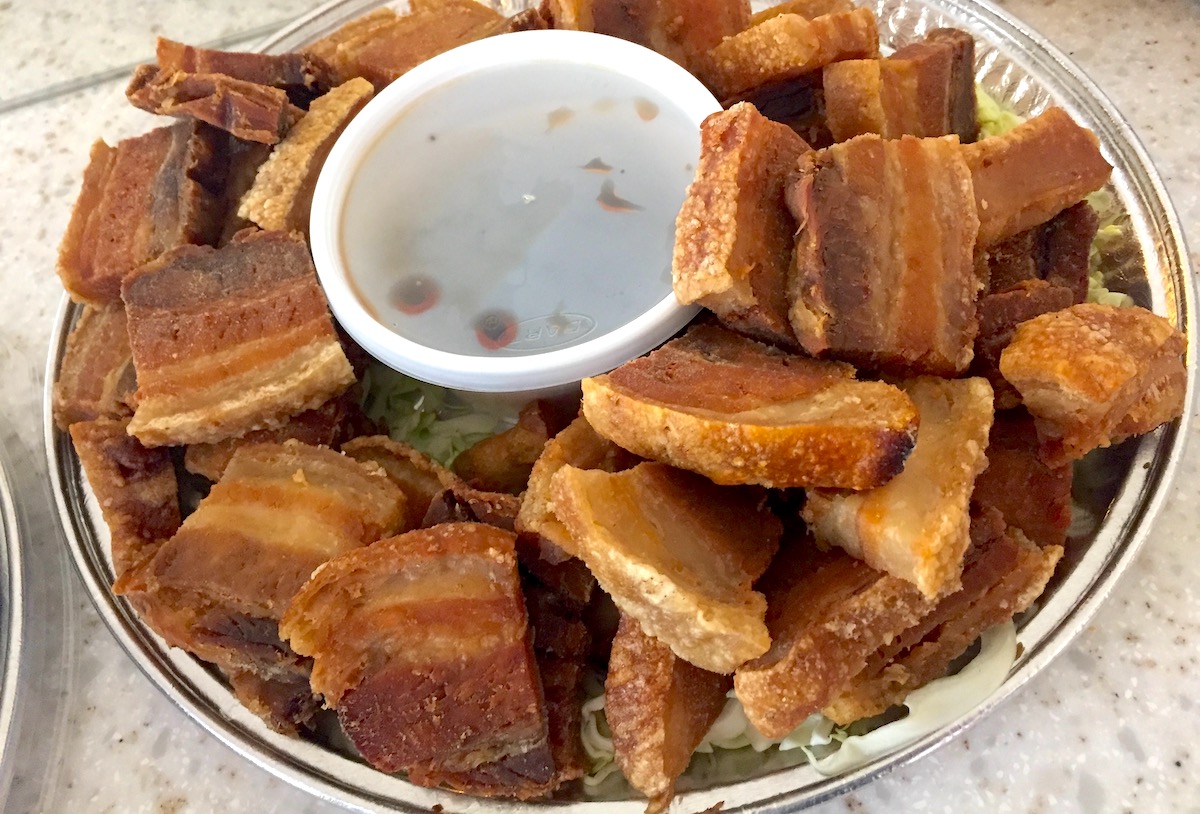 We love da Crispy Pork Belly so much we bring ’em to potlucks. But den everybody started copying us. Das bite, brah. Photo: Lee Tonouchi

Nowdays, like how my faddah used to bring me, I bring my childrens for eat at Shiro’s. My family’s faves include saimin of course (Shiro’s makes their own noodles in their own factory and their dashi stay supa ono), da Country Fried Noodles, and da deep-fried Crispy Pork Belly with Shiro’s Ponzu Sauce (dis one’s more new school). 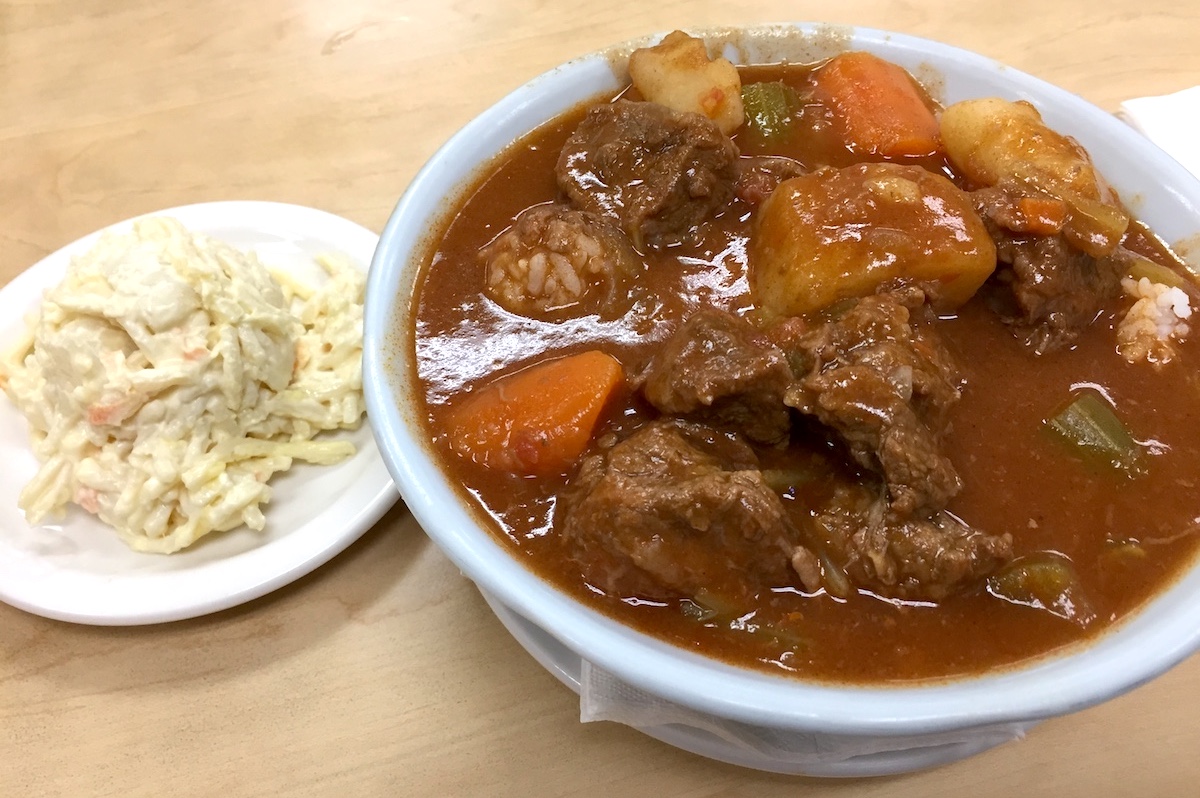 My personal favorite has always been their Local Boy Beef Stew, as one side order Stew Bowl with Rice, cuz you get more stew that way. An’den I get one side order of da Potato Mac Salad. On top da website it says Shiro’s wuz da first for use spaghetti noodles in his potato-mac salad. I wondah how come he nevah use saimin noodles, yeah? It’s so good that I even know people who go dea special on their way home from work for order takeout of JUST da potato-mac salad. 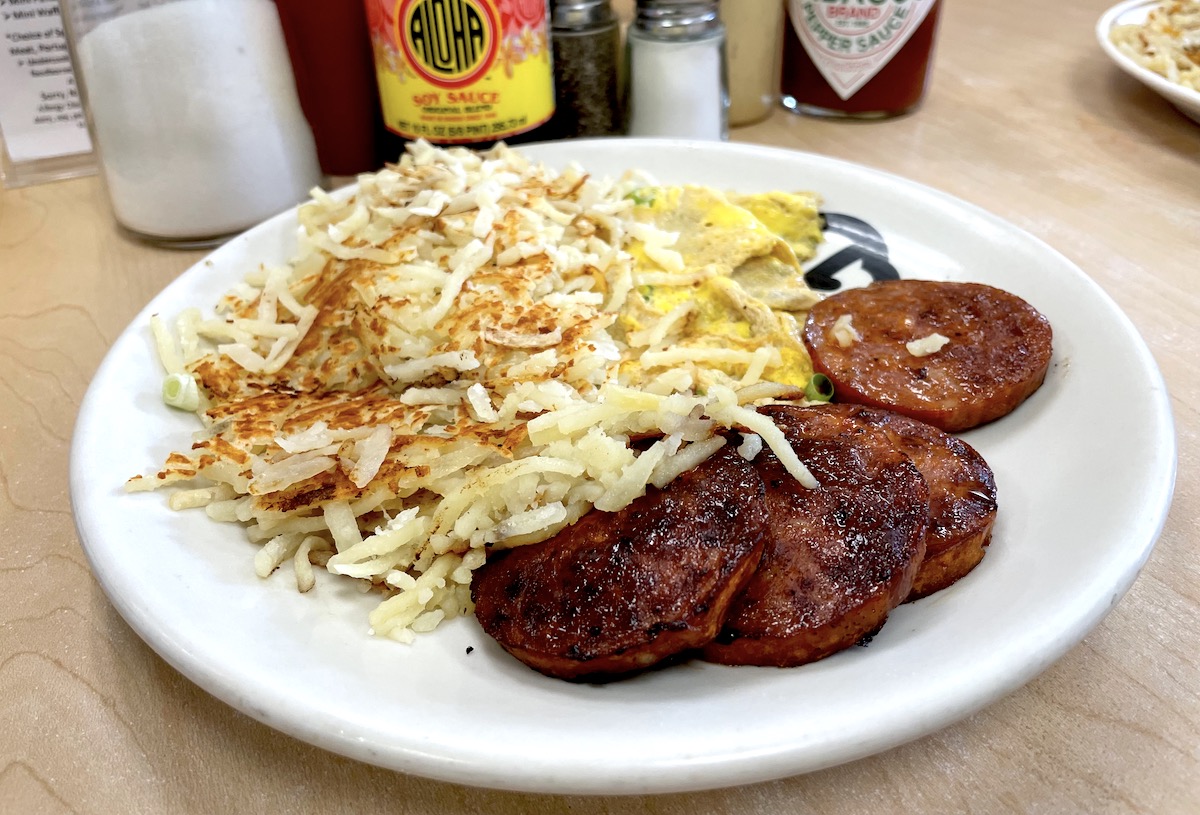 Da third generation of Shiro’s family stay running Shiro’s now. His grandson Bryce Fujimoto wen take over da operations and da penning of new poetry. He signs his poems as “Saimin Jr.” When we had our keiki’s two-year-old birthday party it wuz very important to me that we got da catering from Shiro’s. I wuz quite impressed when Saimin Jr. himself delivered da food. I know Mr. Shiro would’ve been proud.

So I told Saimin Jr. about how his grandfaddah sang Happy Birthday to me when I wuz two an’den how now my keiki wuz turning two. I wuz hoping maybe da grandson might provide us with some musical entertainments, but he just laughed and said “Yup, sounds like Grandpa.”