Sometimes, you just have to go cold tofurkey.

My doctor suggests going vegan. We’re discussing results from my annual checkup, 99% of which are excellent. But we’re looking at the other 1%. “I’d like to try an experiment,” she says. “Try going vegan. For six weeks.” She drops the bombshell as casually as if suggesting I try a different brand of socks.

“Fine,” I tell her. I’ve done it before. Well, that’s only partly true. I had previously gone 100% green for only four days before I started resembling a boiled asparagus stalk. I was like Popeye, powering through on cans of spinach, only it was killing my will to live. Six weeks? I’ll give it my best shot.

SEE ALSO: Going Vegan Is Hard. Here’s What It Took to Survive Week 3 in Honolulu

The thing with going vegan is that it doesn’t automatically make you healthy. You could live off of Frosted Flakes and Oreos, for example. Or Impossible Burgers and Beyond Sausages. Or even drink Wesson oil from a wine glass, if that’s your preference. That’s where Raised by the Waves and ‘Ōlena Café come in. The two vegan eateries bracket the island, one on the outer fringes of Kahuku, and the other in town. At the outset of my newfound forced vegan life, they eased the freak-out of my meat-addicted brain.

Raised by the Waves 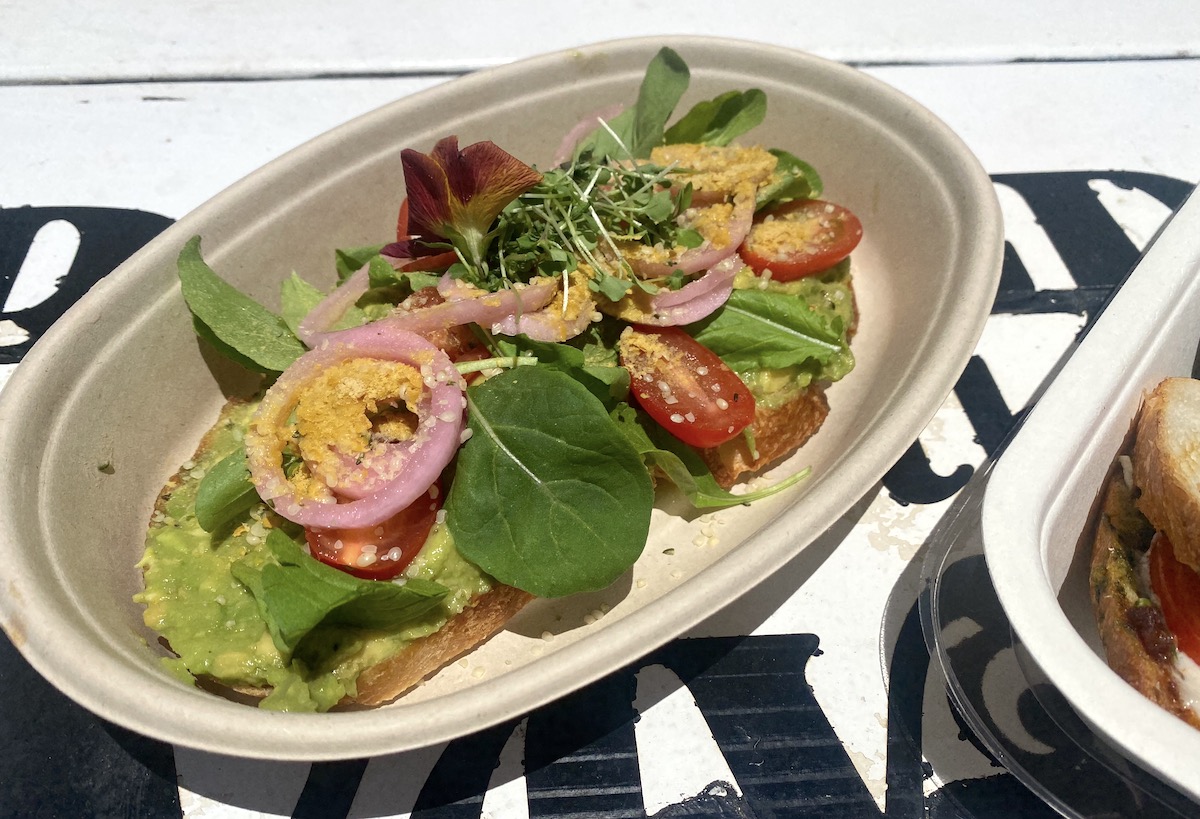 Raised by the Waves sits just out of view at the Kahuku Sugar Mill. It’s tucked behind Seven Brothers at The Mill, which offers Paniolo Burgers and coconut and macadamia nut crusted shrimp plates—basically everything that sounds juicy and luscious. There’s a taco stand in the vicinity. Maybe even some huli-huli chicken. But I stay focused and walk up to the counter.

They offer something that I always look for in a vegan dish, something I’d pick over meat any day. They make food that tastes good—too good for me to replicate at home, and worth the price, even if it is just a bowl of greens. And they don’t do this by simply deploying catchy, hyper-local nomenclature for their dishes.

So while I can smell the grilled char of a burger, and I can see the smoke coming from Seven Brothers, when I crunch into a slice of Avo-Toast ($8) with arugula and cherry tomatoes, pickled onions and hemp hearts, and get a hit of cheesy umami from a sprinkling of nutritional yeast, all is well. I need more. 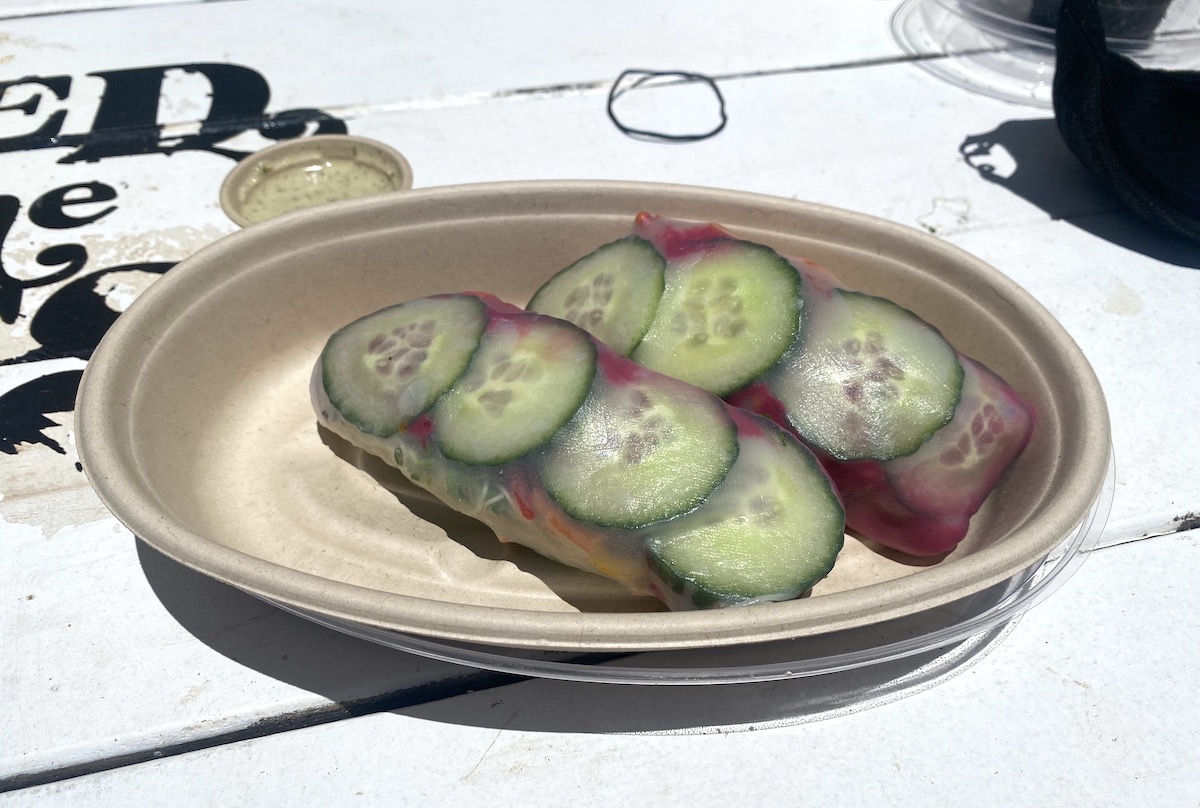 I opt next for something more constructed: Island Rolls ($10). Rice paper wraps with cucumber and beet slices, beet hummus, sprouts, arugula, purple cabbage, cilantro, mint, shredded carrots and bell pepper. It looks like frosted glass-blown art, the beet hummus aswirl with bright green disks of cucumber. The herbs give it a bright crest of aromatics. The sunflower tahini sauce gives it the right touch of richness.

I feel pretty good—a prime specimen at one with sun, air and earth, breathing it all in. It’s the farthest I’ve ever driven for vegan fare, but it was worth it. Yeah, I can do this. I think. 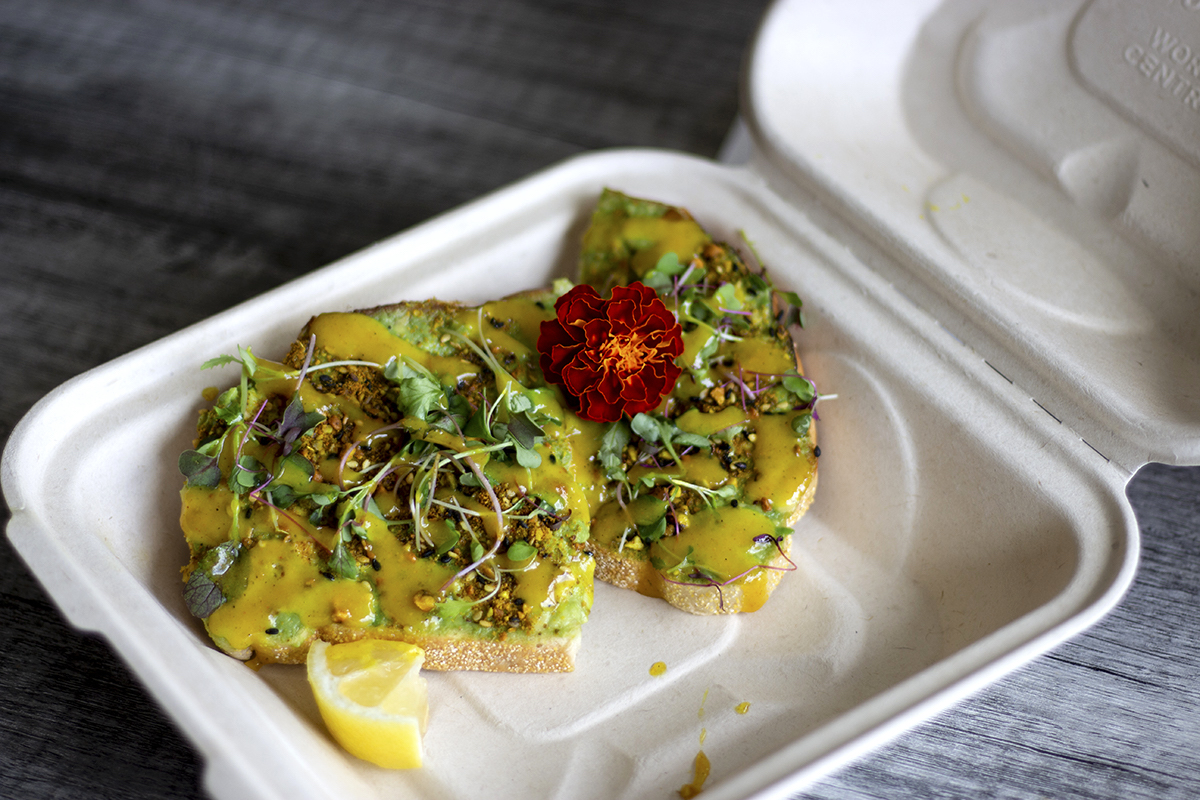 Back in town, by the middle of the workweek I’ve already succumbed to a vegan loco moco, vegan lasagna and vegan breakfast burrito. Basically, vegan junk food. Raised by the Waves is a memory on a distant horizon. I’ve cooked large batches of carb-heavy ribollita bread soup, carb-heavy vegan gumbo and a cream-heavy South African carrot soup. My fridge is depleted of produce and I’m out of ideas. Then my editor suggests ‘Ōlena Café, a small place on Kapi‘olani near Ala Moana Center. Again, I run a gauntlet of temptations to get there. Akasaka. Pho One. Teddy’s Bigger Burgers. Papa John’s Pizza. But I maintain my resolve and walk into ‘Ōlena Café.

The menu offers a lot of salads and bowls. Again, I avoid the salads and anything I could make at home for cheaper. I order avocado toast because I can’t resist it, and add on a breakfast sandwich with a chickpea frittata.

SEE ALSO: From Greece to Papakōlea: Get Your Greek Fix in the Hills of Tantalus

This avocado toast ($9.25) is more vibrant than the one at Raised by the Waves. It comes with the added acidity of the ‘Ōlena’s house dressing—a blend of apple cider vinegar, lemon, turmeric and other good stuff—and topped with basil microgreens, sesame seeds and nutritional yeast. It’s really good, beautifully plated. I can make this at home, I think to myself. The only thing I’m missing is the house blend, which they sell separately. 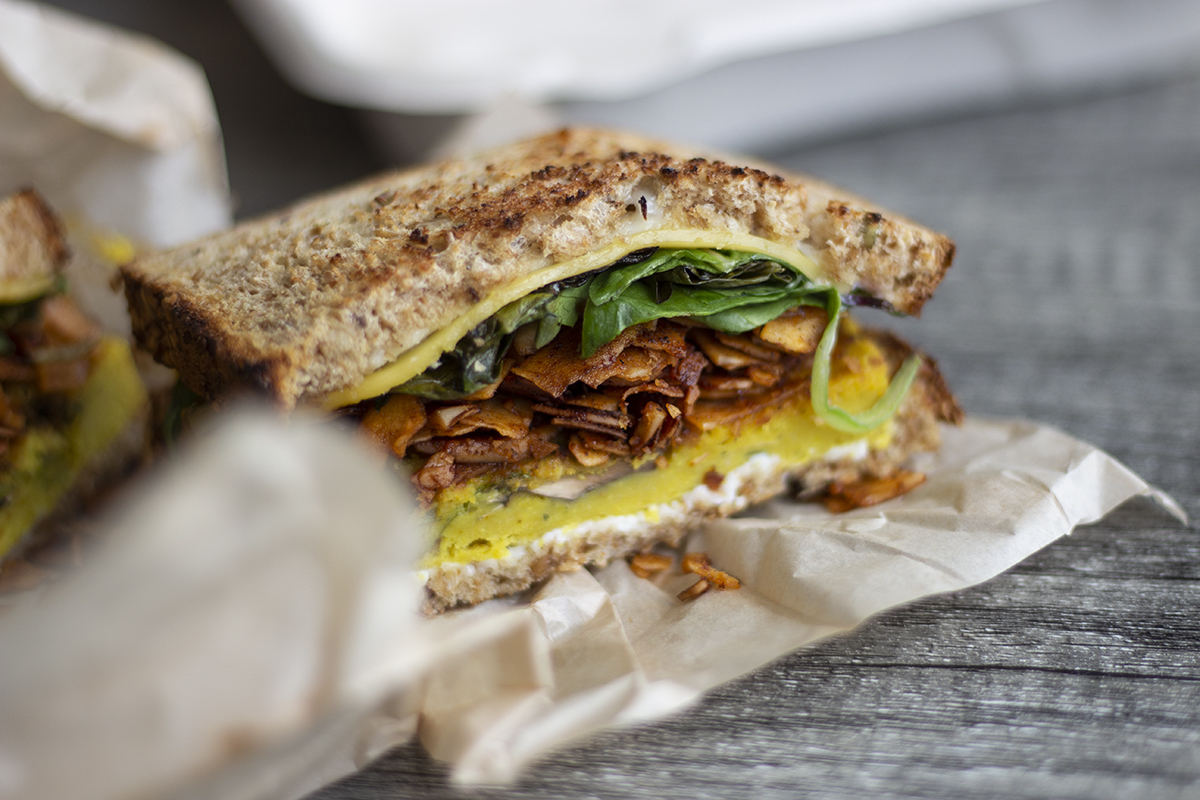 The breakfast sandwich ($11.95) is a bit more complex. The chickpea frittata, moist and almost eggy, is good on its own. With the first few bites I’m taking in the sweetness of coconut. The Chao cheese is an alchemized square of coconut oil and potato starches with a mild coconut flavor. I realize that what looks like fried garlic chips is actually “Bacocon”—crispy toasted coconut in disguise, cloaked in seasonings but not fatty. For a while, all I’m chewing is Bacocon fiber. And then it hits—a textural bit like bacon gristle—then disappears. Was it real? Or wishful chewing? 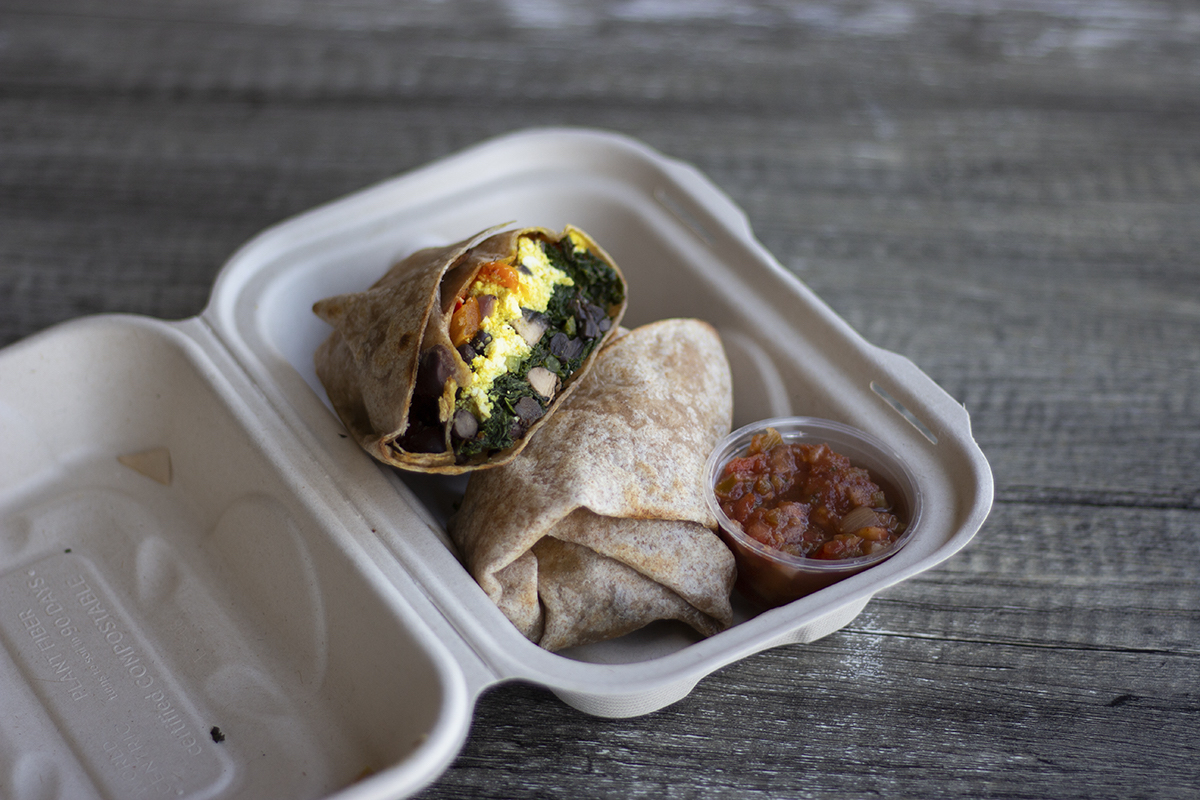 A few days later I return for breakfast and try the breakfast wrap ($11.95) of portobello mushrooms, kale, bell pepper, black beans, onions and a “scramble” of tofu wrapped in a whole wheat tortilla. Hearty veggies, a nice vibrant salsa, a little heavy on the salt. I read that fresh vegans need to make up for the lost sodium of hot dogs and other junk food. So maybe I have this breakfast wrap to thank for keeping my electrolytes in balance.

The word “scramble” makes me realize that had ‘Ōlena’s menu stated plainly the ingredients of the breakfast sandwich—chickpea flour patty, coconut oil, toasted coconut chips, lettuce and whole wheat bread—I wouldn’t have ordered it. Nor would I have ordered the breakfast wrap without the word “scramble.” The bait-and-switch was necessary for my meat-addled caveman brain to glom onto. That’s my conclusion at the end of two weeks. Yes, it’s only been two weeks, and I’ve developed a thousand-yard stare. Are those clouds in the distance? Or a giant T-bone smoking on a heavenly grill?