It’s been over three weeks since I started my doctor-recommended 42-day vegan diet and my brain is operating on cellulose alone. Some animals can work on half a brain. Dolphins, for example, sleep with half their brains so they can stay afloat and not drown. Migrating birds sleep with half their brains so they can keep flying. Myself, I’m operating on half a brain as I type this. The other half is asleep and dreaming about a gleaming can of wild-caught Atlantic pink salmon. I’ll get back to that later.

First let me tell you about my newfound appreciation for Piggy Smalls. After weeks of patronizing vegan cafés and cooking vegan dishes at home, I wanted to level up. At Piggy Smalls, a supernova of flavors permeates the vegan pho ($16). Initially the steaming broth appears to suffer the same fate as other meatless recreations of carnivore fare. The deep flavor of long-simmered beef bones is notably absent, leaving a hollowed-out stock that’s been filled in with kombu and other vegetables. The meaty jolt that normally fires a synaptic shortcut in my brain—“Stop the hunger pangs, food is in the building!”—just isn’t there. 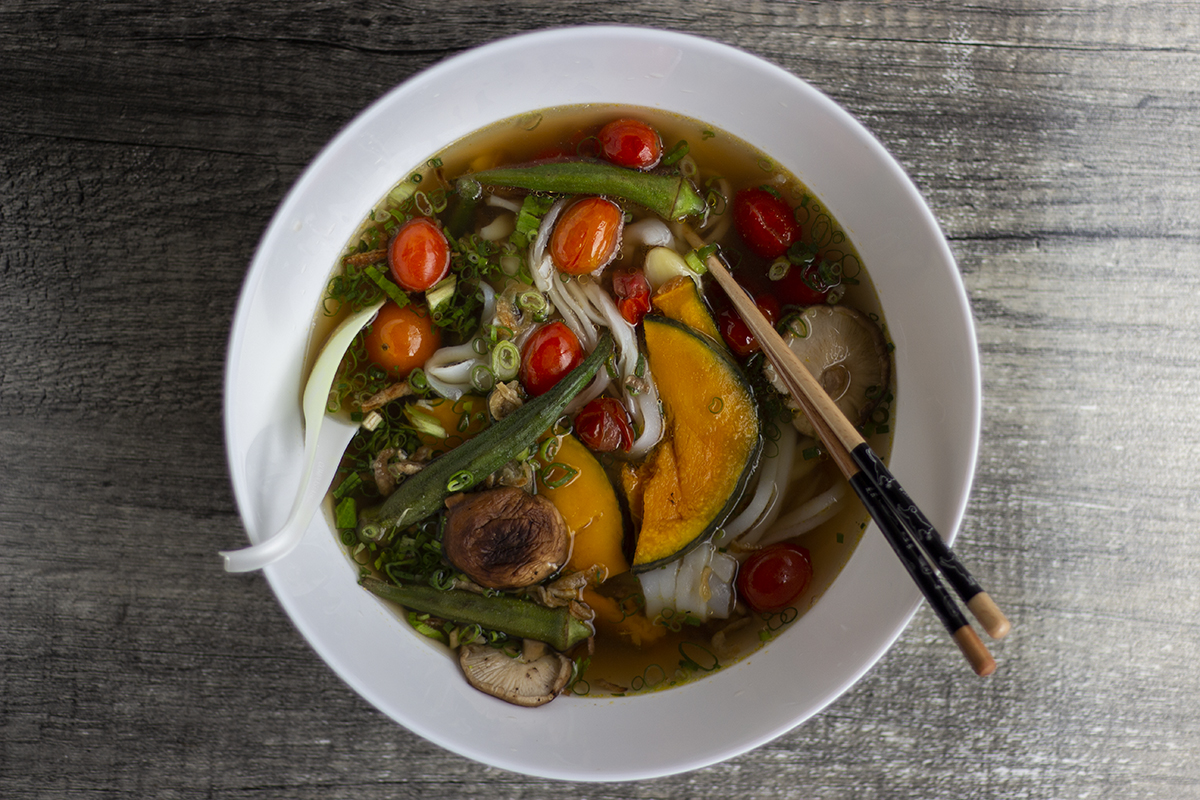 Then the vegan broth starts to reconfigure the expectations of my taste buds. Now I’m tasting real depth and complexity. I pick my way through okra—a slimy, crunchy textural detour—juicy tomatoes, onions, shiitake and enoki mushrooms, half-moons of kabocha, green onion and fried shallots. As I slurp, beautiful strands of rice noodles capture the broth. My hunger fuels a need to finish every drop. The cooling broth lets me appreciate the inverted, sweeter side of every ingredient. Really good. 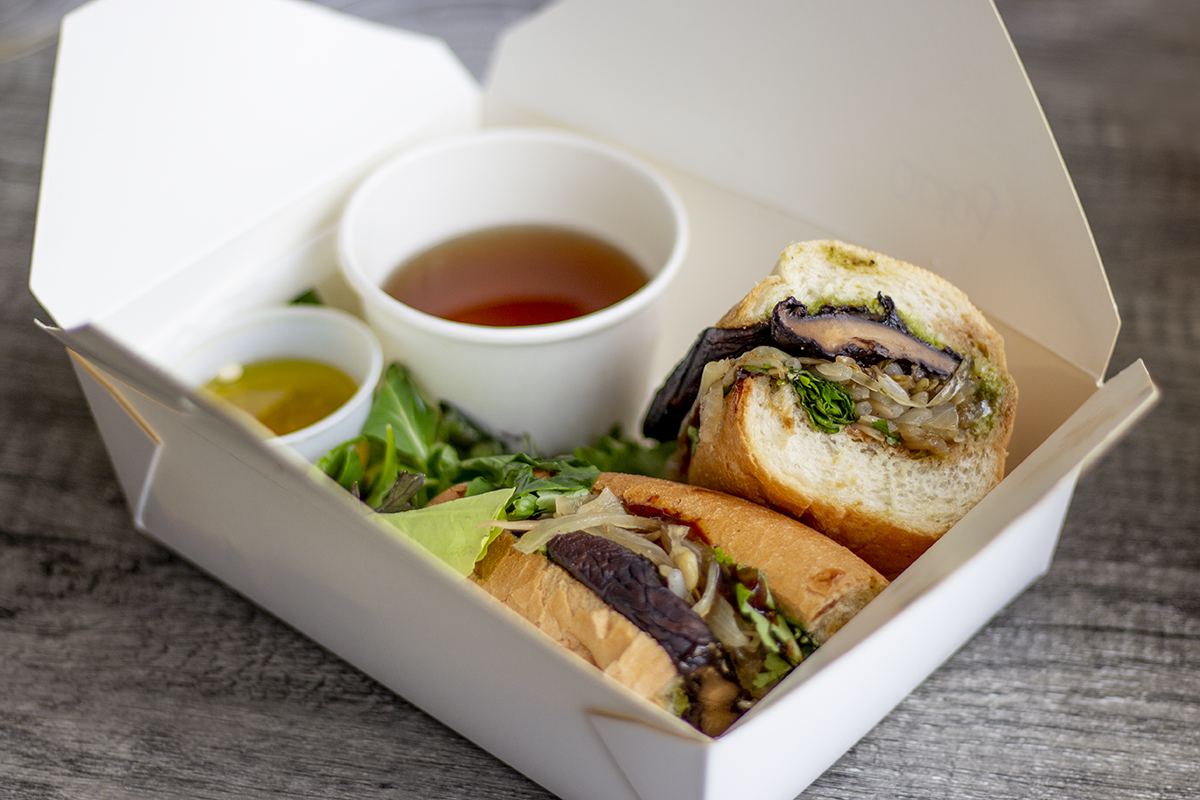 Here’s the thing about going vegan: I’m almost always hungry. At home, I begin to prep ingredients for my next meal, but predictably, the hunger returns within half an hour. Luckily, I had the foresight to bring home from Piggy Smalls a portobello banh mi with mushroom french dip ($17) for later. Which, I guess, is now. In appearance the mushroom cap, sandwiched inside La Tour french bread, looks like teriyaki beef—the kind you find in a box lunch with tasty fried meats. It sits atop a bed of sautéed bean sprouts and onions with a smear of spicy hoisin and Thai basil chimichurri. It’s earthy and hearty. The dip, made with 16 types of mushrooms, is a dark pool of umami. When you bring these together, the meal takes on new heights. The portobello banh mi and vegan pho have got to be the best vegan items I’ve ordered at a restaurant.

Now back to that can of salmon. It’s real, and in my pantry. When the hunger comes back, this time it brings a wave of weakness: My meat-addicted body is craving animal protein. I’m conflicted. I’m well aware of the myriad benefits of veganism for your body and the world at large. Going vegan pulls you from the mercantile cycle of animal cruelty, environmental erosion and unethical treatment of farmers and laborers. At the same time, nutrient deficiency can be a serious peril without the aid of synthetic supplements, underlining the fact that humans simply did not evolve to exist on plants alone. Do I need a burger, a steak, a mound of bacon? Surely not. But how about that can of salmon? 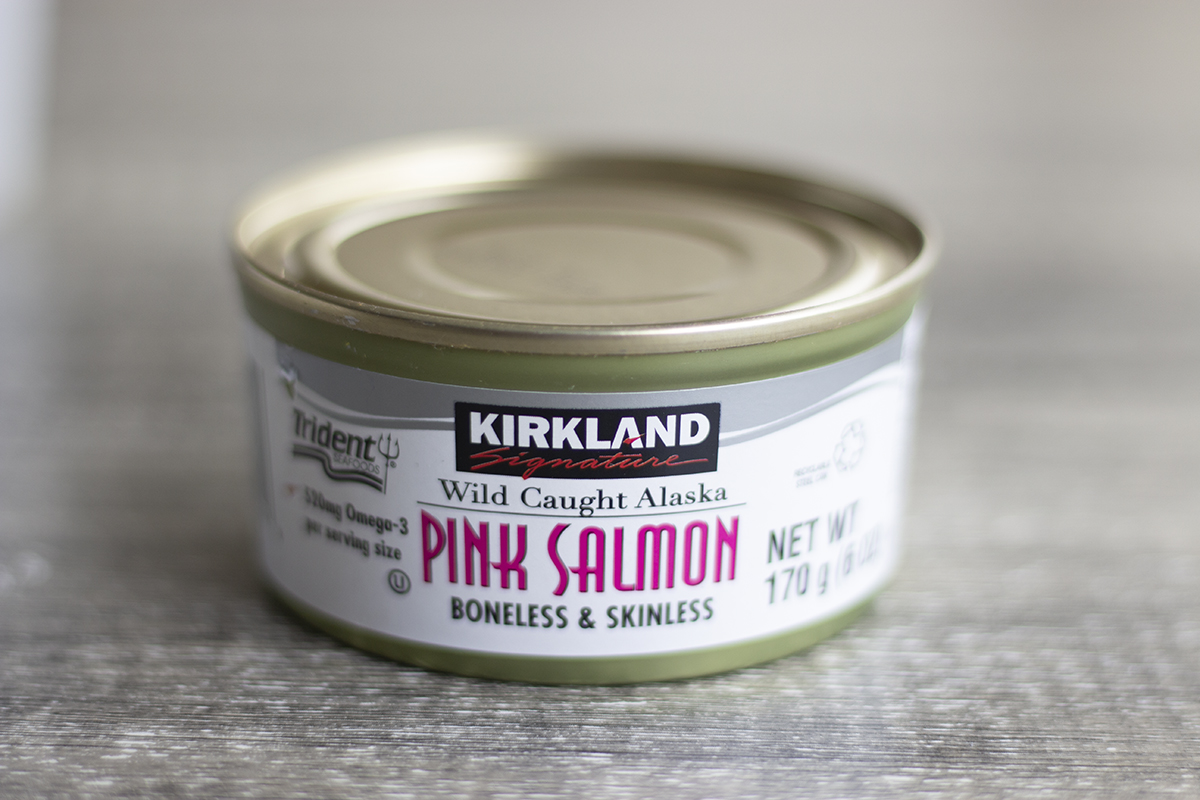 I crank the can opener, peel back the lid and fork the salmon right out of the can. As soon as it hits my stomach it releases a wave of relief I haven’t experienced since starting this trial. It wakes my half-asleep brain. Now I can focus. Now I have the strength to keep going vegan. I power through the irony, pretending this salmon incident was one of those guilty dreams you have when you quit something cold turkey, when you wake up and go “Phew, what a nightmare,” and ignore the empty can sitting on the counter.

Note: James is powering through the second half of his 42-day vegan odyssey, but Piggy Smalls is taking a break. The restaurant will reopen Sept. 16.