A COVID-19 Timeline: How Honolulu Got To This Point

On March 6, 2020, the state confirmed its first case of COVID-19. Now one year and 27,640 cases later, we take a look back at the milestones of the pandemic in Honolulu. On March 4, 2020, Gov. David Ige issued the first emergency proclamation concerning a new coronavirus that the proclamation noted “has rapidly spread around the globe and has been found in 78 countries.” It was called SARS-CoV-2, the virus that causes COVID-19. At that time, the United States had 108 confirmed and presumptive cases with the World Health Organization recording almost 3,200 deaths worldwide. One year, 28.8 million U.S. cases, 114.8 million confirmed global cases and more than 2.5 million deaths later, three vaccines are being distributed across the U.S. and we are finally talking about the possibility of sending Hawai‘i kids back to class five days a week and joining nine friends for dinner in an O‘ahu restaurant.

The past 365 days have been unlike any other this generation has ever known. As the number of daily cases fall and hopes for a return to regular life rise, we take a look back at how quickly a virus that originated overseas turned life in Hawaiʻi upside down.

Here is a look at key moments since the state began posting daily COVID-19 updates in late February. Feb. 21: The state Department of Health begins daily COVID-19 updates after learning a visitor from Japan tested positive after a trip to Hawai‘i. No cases connected to this were found in the state, although 56 people were self-monitoring.

March 6: The DOH announces the first Hawai‘i case of COVID-19. The O‘ahu man is one of 21 who becomes ill after taking a Grand Princess cruise ship to Mexico.

March 13: BYU-Hawai‘i cancels in-person classes and starts teaching remotely. University of Hawai‘i announces it will do the same beginning March 23 and all UH athletic events are suspended immediately and indefinitely. March 23: Mayor Kirk Caldwell’s five-week stay-at-home order goes into effect for O‘ahu at 4:30 p.m. All businesses, except for those deemed essential, are ordered closed along with city parks and beaches. The first COVID-19 death is announced; the manner of death is later rescinded, pending an investigation. (Total statewide case count: 77.)

March 26: Hawai‘i is first in the nation to require travelers to the state to quarantine for 14 days. Jobless claims for March hit 82,963. (Total statewide case count: 106.)

March 31: An older O‘ahu man with other medical issues is confirmed as the first person to die of COVID-19 in Hawai‘i. The state says he recently traveled to Las Vegas. (Total statewide case count: 224.)

April 10: At 11 p.m., Honolulu enacts a nightly curfew for the Easter weekend. All travel is banned from 11 p.m. to 5 a.m. Friday through Monday morning.

April 17: The governor closes state beaches and places a moratorium on evictions. The DOE announces distance learning will continue through the May 28 end of the school year. (Total statewide case count: 551, including 9 deaths.) April 21: A woman from Las Vegas and a man from Sydney are arrested for violating the required 14-day quarantine. A hotel manager alerted the state that they were leaving their rooms.

April 23: Face masks are required in all places of business and on public transportation in Honolulu. The state says 109 visitors arrived at the airports on April 22, compared to nearly 30,000 daily passengers a year ago.

April 25: The state extends stay-at-home orders and the 14-day quarantine for travelers until May 31. Honolulu city parks and state beaches reopen for exercise only. (Daily statewide case count: 3. Total: 604.)

April 30: Honolulu announces shopping centers, sport fields and courts and drive-in services for religious purposes may reopen on May 15. Dine-in food courts, play areas and arcades must remain closed. Outdoor exercising is allowed for groups of 10 people or fewer.

May 5: The state goes into safer-at-home orders, allowing for low-risk facilities to reopen on May 7. (Daily statewide case count: 4. Total: 625.)

May 8: No new cases are reported for the first time since mid-March. The state will see no new cases on seven other days through early June. (Total statewide case count: 629.)

May 18: Ige changes state’s “Safer at Home” phase to “Acting with Care,” allowing businesses categorized as medium risk—including salons, theaters, churches and restaurants—to reopen in a few weeks. He also extends 14-day quarantine for all travelers and the moratorium for evictions through June 30. (Daily statewide case count: 0.) May 23: In-person spiritual services may resume, with social distancing.

June 8: All state beaches and some state parks reopen for recreation.

June 12: Daily case counts reach double digits for only the second time since April 18. Ten confirmed cases are in one family. The 15 cases push Hawai‘i’s total to 706.

June 16: Interisland travelers no longer have to self-quarantine.

June 19: Gyms, recreation areas, bars and most other places are allowed to reopen in Honolulu. Kaua‘i reports its first new case in two months. The daily count of 27 new cases is the largest increase since April 4. July 7: The state reports 41 new cases, the highest number since the pandemic began. A new record will be set just four days later, with 42 cases.

July 23: Hawaiʻi starts three record-setting days of case counts: 55, followed by 60 on July 24 and 73 on July 25. Masks are required in Honolulu gyms after COVID-19 clusters are tied to several on O‘ahu. 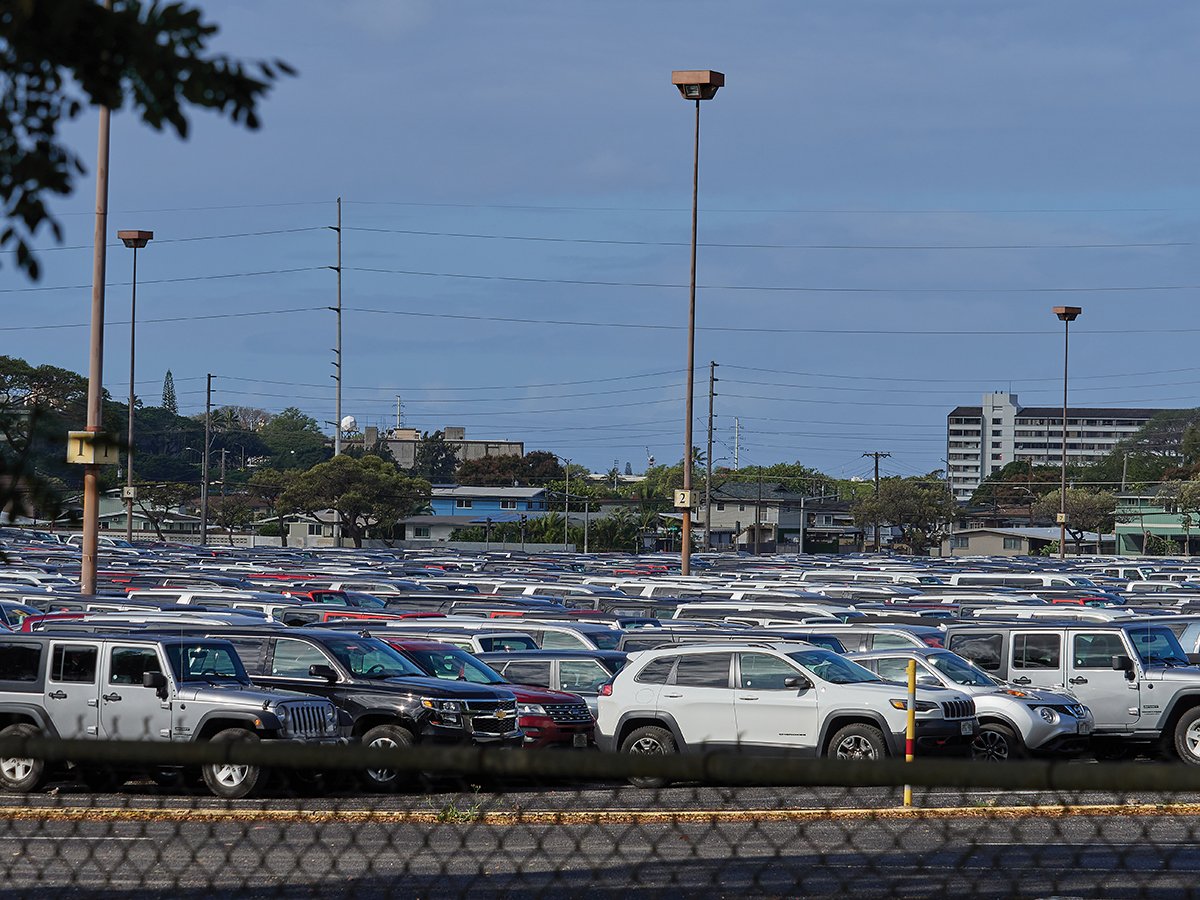 Aug. 4: Hawai‘i surpasses 3,000 cases and 31 deaths. The DOE announces all public school students will do distance learning for at least the first four weeks of the new school year. Most students remain out of classrooms until November, when many return to campus for just a few days a week.

SEE ALSO: In the Room with COVID-19: Hawaiʻi Nurses Talk About Patient Care in a Pandemic

Sept. 8: Honolulu’s stay-at-home order is extended two more weeks. The daily case count drops below triple digits (66) for the first time since July 31. Still, it pushes the state total above 10,000, more than triple the total just a month ago. 88 people have died.

Sept. 11: Lt. Gov. Josh Green tests positive for COVID-19 after a deputy sheriff with his security detail contracts the virus.

Sept. 18: The state says that an outbreak first reported at the Yukio Okutsu State Veterans Home in Hilo in August has killed 12, pushing the statewide death total above 120. 27 residents will die by the end of the month.

Oct. 15: The state’s Safe Travels Hawai‘i program allows Mainland visitors with a negative test from an approved partner, taken no more than 72 hours before arriving, to skip the 14-day quarantine.

Oct. 22: Honolulu moves into Tier 2, allowing up to five people from different households to dine out together and gyms and arcades to open at 25% capacity. It will remain in this tier for more than four months.

Oct. 27: A stay-at-home order goes into effect on Lāna‘i as the number of people there with COVID-19 rises to 87.

Dec. 10: The first positive case is reported on Moloka‘i in an asymptomatic adult who traveled interisland. Kalawao was the last county in the U.S. with no cases of COVID-19.

Dec. 15: A doctor who works in the COVID unit, a housekeeping aide, two nurses and a respiratory therapist from The Queen’s Medical Center are among the first to receive a coronavirus vaccine in Hawai‘i. More than 61,000 doses of the Pfizer-BioNTech and Moderna vaccines will arrive by the end of the month. (Daily statewide case count: 57. Total: 19,480 cases, 274 deaths.)

Dec. 29: The state launches a website outlining its vaccination schedule. The general public is slated to begin receiving vaccines in the summer of 2021.

Jan. 7: The state adds daily vaccination data (25,470 administered) to its website on a day with the highest daily case count (322) since August. The next day, Hawai‘i’s deaths will surpass 300.

Jan. 25: DOH lab tests find the first L452R variant of COVID-19 in the state. This strain was first found in Denmark in March 2020 and does not appear to spread more quickly or create more severe symptoms than others. The more contagious B.1.17 and B.1.351 variants have not been found in the Islands.

March 3: The DOH announces that people 70 years and older can begin receiving the vaccine on Monday, March 8, which is ahead of schedule. The same day, Hawai‘i receives its first shipment of the new single-dose Johnson & Johnson vaccine.