When Moku Kitchen shut down, the chef teamed up with his best friend’s girlfriend’s mom to feed her friends and neighbors. 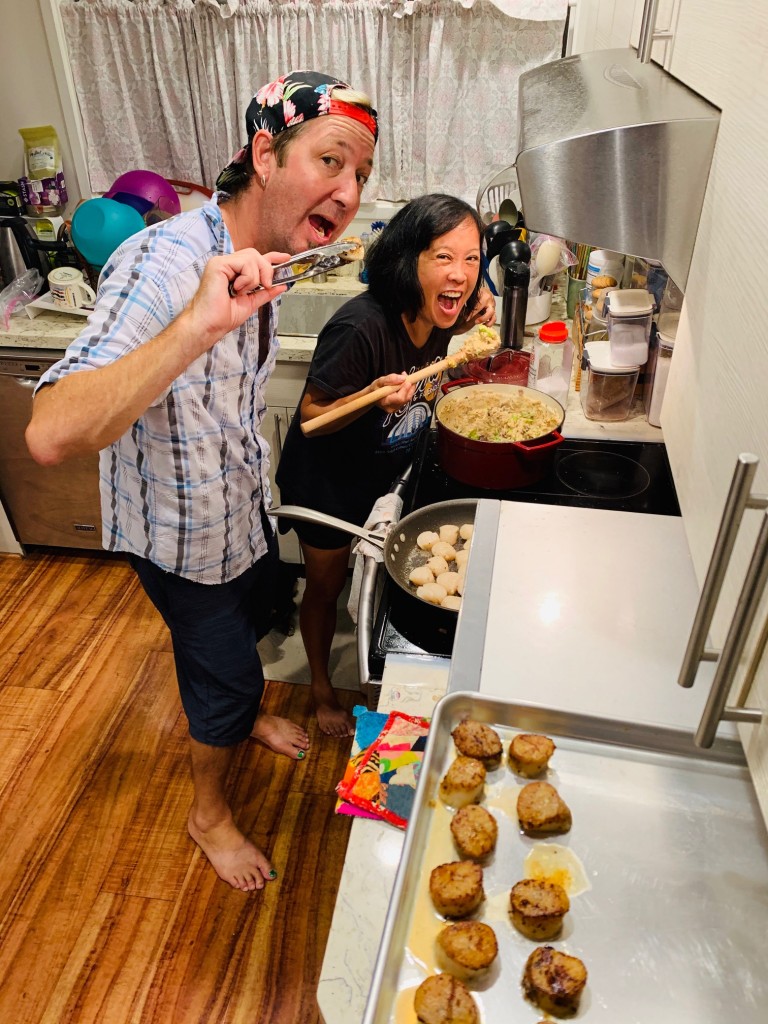 Spencer O’Meara and Susan Soken cook mushroom risotto and scallops in her kitchen to deliver to friends during the pandemic. Photo: Courtesy of Susan Soken

What do a vice president at the largest bank in the Islands and a 30-year veteran chef have in common? Not much, you might think. Spencer O’Meara sits at a conference table, his mohawk and tattoo sleeve in stark contrast to the corporate office he’s sitting in. It’s his day off from Moku Kitchen, where he’s been the executive chef since shortly after it opened four years ago. He’s joined by Susan Soken, vice president and advertising manager at First Hawaiian Bank, whose daughter is dating O’Meara’s best friend. Soken and O’Meara had only met a couple of times before the pandemic—including at Thanksgiving last year, “because my friend brought him,” Soken says. Turning to O’Meara, she starts laughing. “I didn’t even hardly talk to you.”

But here they are a year later, together in Soken’s conference room for our Zoom interview, joking with one another like longtime buddies, united by two things: a love of cooking and giving back to the community, which led to the pair preparing hundreds of free meals for friends and family over the course of six months. 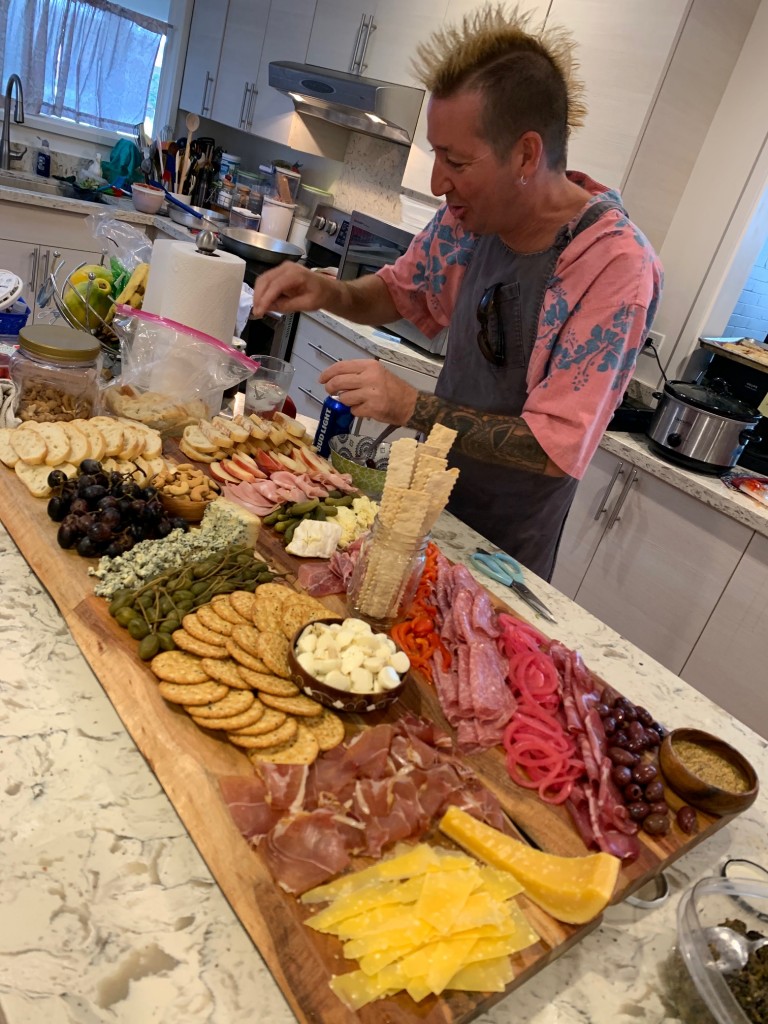 O’Meara put together two of these impressive 3-foot charcuterie boards for a small birthday party. “It was only for like six people,” Soken says. Photo: Susan Soken

As with many big ideas, it started small.

“In March when COVID started, I felt super discouraged. Everything was being taken away from me, you know, workout clubs, lunches with friends, just everything; everyone experienced the loss. And I felt like, oh my God, this huge tsunami is coming and I can’t stop it. I can’t do anything about it,” Soken recalls. “And then I thought, well, I can cook for someone.” That first weekend, she made dinner for her neighbors, who had lost their jobs and had two young children, as well as an older woman from church. The following week she made food for an ER doctor she knew and a friend starting chemotherapy. “And I thought, I could cook every week but it’s gonna take me forever to cook for a lot of people.”

That’s where O’Meara came in. “I happened to stop by and she’s like, ‘Oh, you want to help me cook?’ I was like, ‘OK, sure,’” he says with a laugh. “I showed up, and she suckered me in with a couple Bud Lights in the fridge.” Moku had just closed (temporarily, because of the pandemic) and, even though they didn’t know each other well, “I had nothing to do. And one of Moku’s core values is giving back to the community.” O’Meara never had the time to do much outside of the restaurant (“I always worked like 70 hours a week, for the last 30-something years”), so he was surprised to find himself channeling these values on his own. “And it felt really great. It really did. It felt cool.” 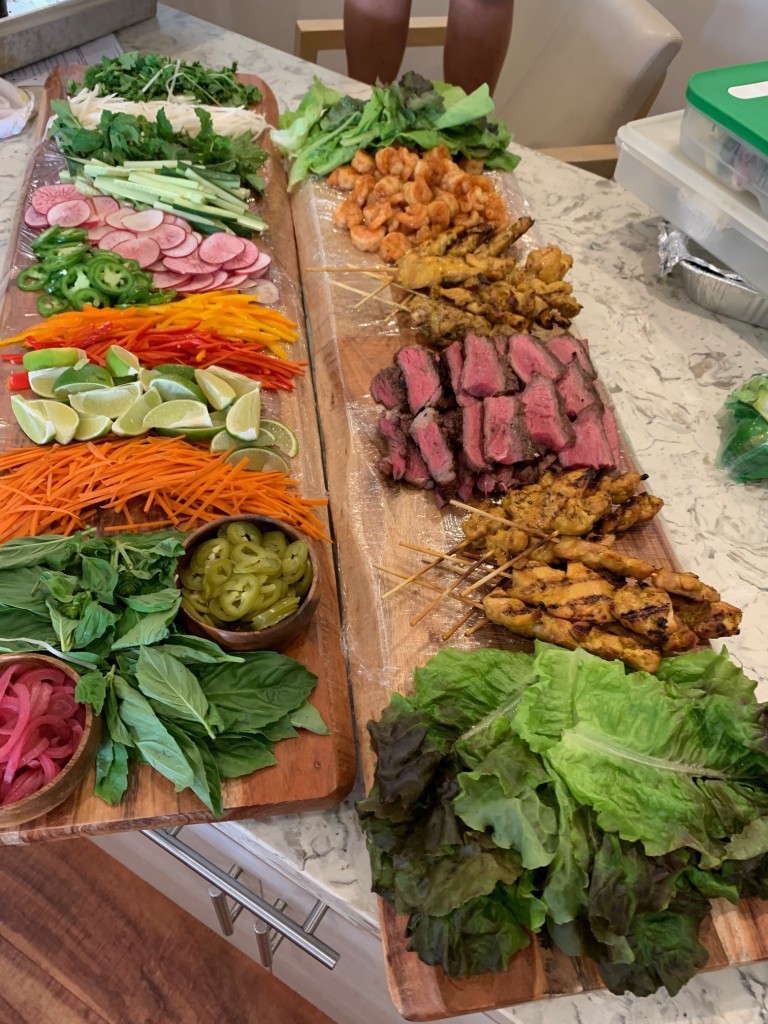 The first time they cooked together at Soken’s house, they whipped up enough food to deliver meals to about 20 households—Soken’s parents and friends in their 80s who were all locked down. “She’ll come up with an idea and just be like, ‘Oh, let’s make this,’ and I’m like, ‘All right, let’s do it,’” O’Meara says. He comes up with a shopping list, she buys all the ingredients, “and then we post up in the kitchen. She’s got a big kitchen island, and we knock it out. And she always says the same damn thing: ‘Wow, this is harder than I thought it was gonna be.’”

SEE ALSO: Meal Kits to Grocery Delivery: How to Eat the Best Local Food at Home

Because when you ask a chef with as much experience as he has, you’re not getting an Instant Pot dinner. O’Meara has been in the restaurant industry for 33 years and has worked as an executive chef since 1999. “He wouldn’t let me use cheese from Costco” for an Italian charcuterie board, or canned tuna for salade nicoise, Soken says. Instead he made seared ‘ahi with a coriander and fennel crust and hand-ground anchovies for the vinaigrette. Even when Soken suggested something she thought sounded simple, beef stew, O’Meara showed up with a bag of bones to make the stock from scratch. “It took 24 hours! It was the best beef stew,” she says, “but I don’t know if I would ever do that again.”

“I can complicate the shit out of anything,” O’Meara says. 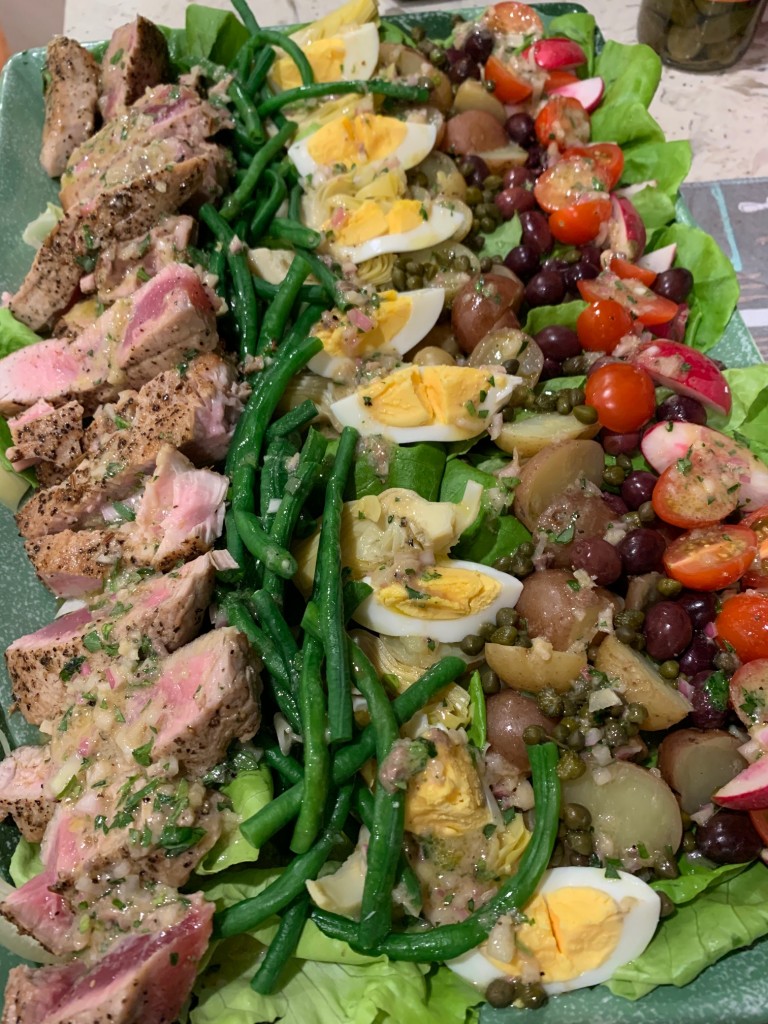 Over the past few months, Soken has delivered food to about 150 people—as many as 30 in a single run—and to some of the same people each week. One week it was two 3-foot charcuterie boards for a birthday; other dishes have included linguine with clam sauce, a crab boil, Vietnamese steak lettuce wraps, risotto with scallops and mushrooms three ways. Soken keeps track of it all in a notebook. They’ve had a little help here and there, but it’s mainly just the two of them, cooking for neighbors, people stuck at home, front-line workers, even high school friends. And O’Meara doesn’t know any of them. (“I work 70 hours a week; I don’t have any friends,” he says.) Once they’re done cooking, he heads home while Soken delivers. 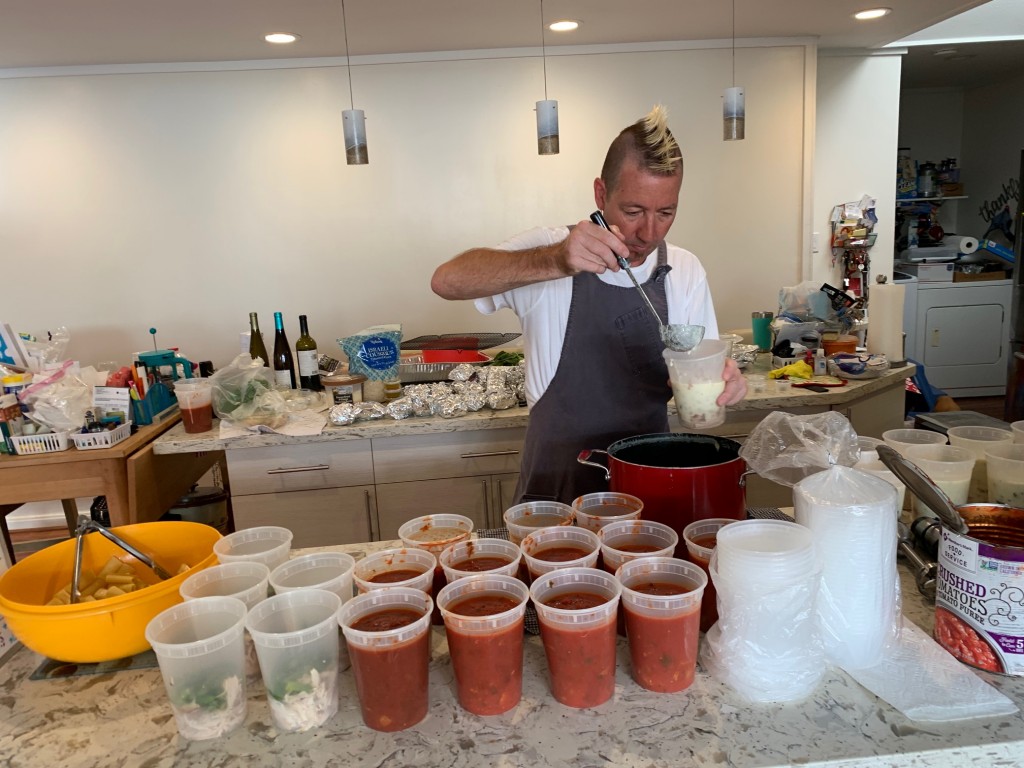 O’Meara loves the creativity and being able to cook while the restaurant remained closed, but it was the joy of giving back and the sense of purpose that kept him and Soken motivated each week. And the two of them were able to create some really special moments.

Every week for six months, they cooked for Soken’s friend Julie who began chemotherapy for cancer back in March. “She said we gave her the gift of time—time with her kids that she didn’t have to worry about what to cook,” Soken says. O’Meara taught Julie how to cook chicken puttanesca, her favorite meal at Assaggio, over FaceTime, then held a small socially distant party with mocktails to celebrate the end of her treatments. They also cooked for Soken’s pastor’s wife, who has cancer as well, creating a lavish meal for a small birthday celebration.

O’Meara had cancer a few years ago, so he knew what they were going through. “You realize that there’s a lot of people out there that are in your boat, or are just getting in that boat that you’ve been in. And it’s a rough ride, but you know, we’re all getting through it, right?” 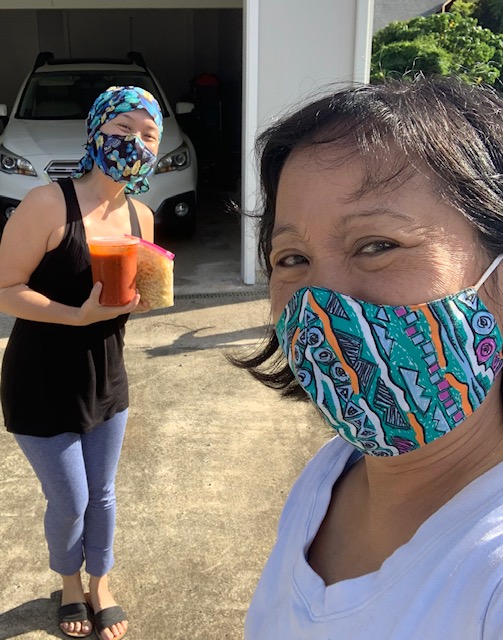 Soken delivered food to her friend Julie, who was going through chemo, every week. Photo: Susan Soken

The unlikely pair says they never would’ve become friends without the pandemic; normally, their schedules are so busy. But those hours spent in the kitchen developing flavors also developed their relationship. O’Meara smiles, knowing he’s rubbed off on Soken whenever she swears. He jokes that “rumor on the street is her husband is happier with the way she’s cooking these days.”

“It’s a dream for a lot of people to cook with a professional chef!” Soken says. “He can cook pretty much anything except Chinese food.” (He can cook Chinese food, he insists.)

Moku Kitchen is open again now (outside seating only, counter service, limited menu and hours), but the two of them still cook and make deliveries when they have time. And sometimes they just chill together as friends. “I’ll go over to her house for dinner now, even without her daughter and my best friend. I just go over and have dinner with them and have a beer,” he says.

“Cooking with Spencer was the best thing that happened to me in COVID,” Soken says. And for many of her neighbors, too.

This article appears in the November 2020 issue of Honolulu Magazine.

Hear from Community Experts in This Week’s Launch of “Life Interrupted: Navigating What’s Next”