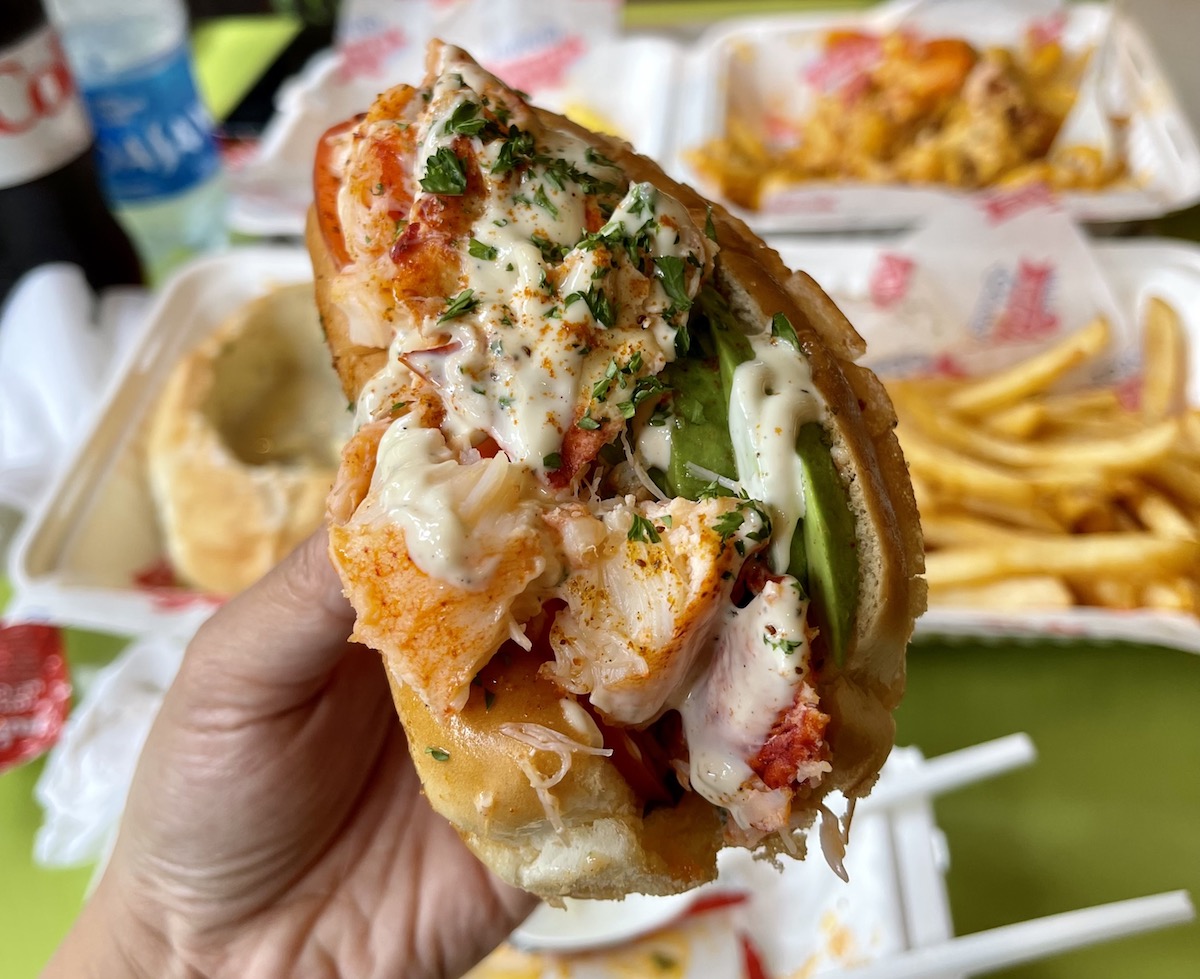 Another day, another Waikīkī lobster roll? Seriously, though, the buttery luxe sammies have been trending around Honolulu since 2020 with no sign of slowing down. Most haven’t fully captivated my appetite, but when assistant editor Thomas Obungen invited me to join him for a media tasting of the new Wicked Maine Lobster at Royal Hawaiian Center, I was pumped: Maine has been the setting of my few memorable experiences with great lobster rolls.

SEE ALSO: Worth the Splurge: Royal Lobster Rolls in Waikīkī 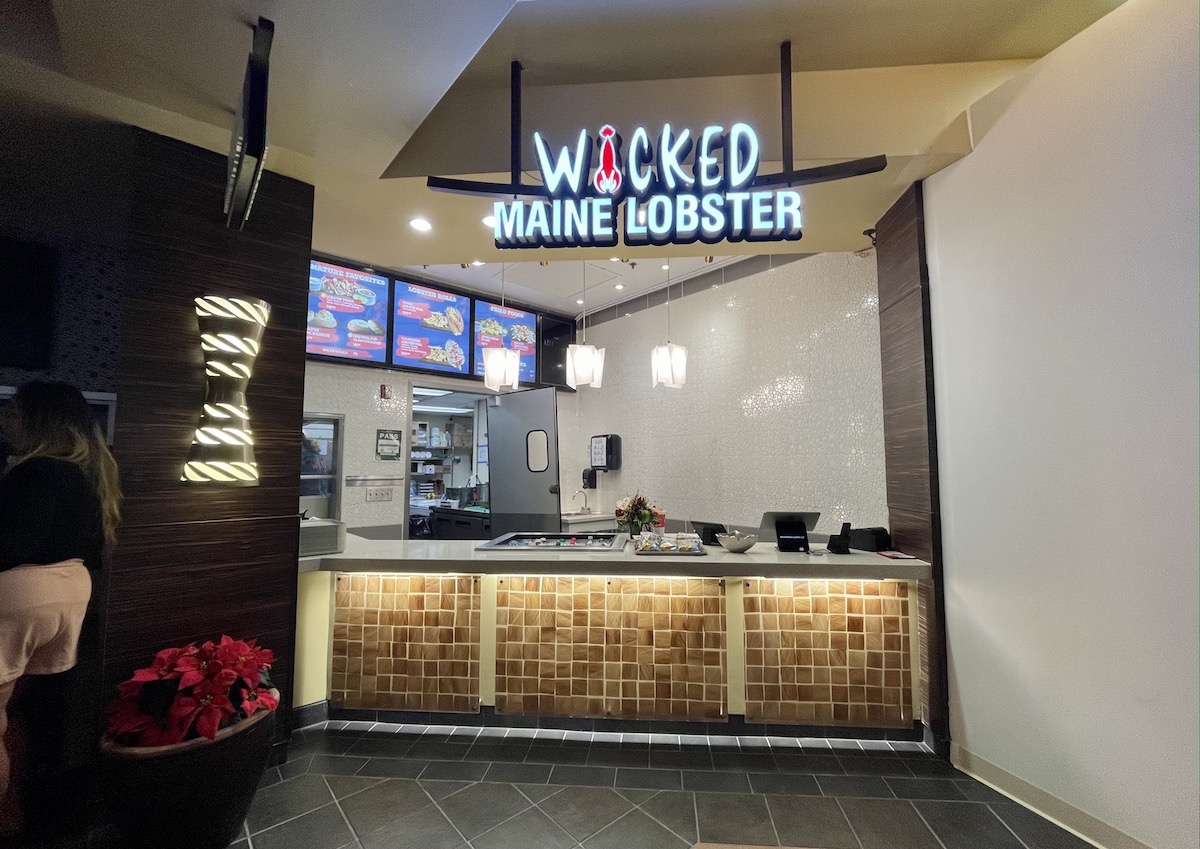 The small but diverse menu has two lobster rolls: the original Maine lobster roll with melted butter ($29.99) and the California lobster roll with lettuce, tomato, bacon, avocado and a lemon garlic aioli drizzle ($29.99), both including a side of fries. We decide on the California roll, thinking these guys might really be on to something with their BLT version. On this cold and rainy day, right away we know we must order the New England clam chowder in a sourdough bread bowl ($10.99, $8.99 sans bread bowl). Our other choices are wild cards: the lobster tacos ($19.99) and the lobster queso fries ($19.99).

While the tacos are an interesting idea, the melding of salsa and a clam chowder drizzle may not be for everyone. It’s not for me; the acidic salsa just doesn’t go with the chowder. Same goes for the queso fries—while I love me some queso, in this case I just can’t taste the lobster over the heavy jalapeño overtone. But the fries are thick, cooked nicely and dressed with a shake of Old Bay, which makes me think that carne asada fry lovers might really dig them. 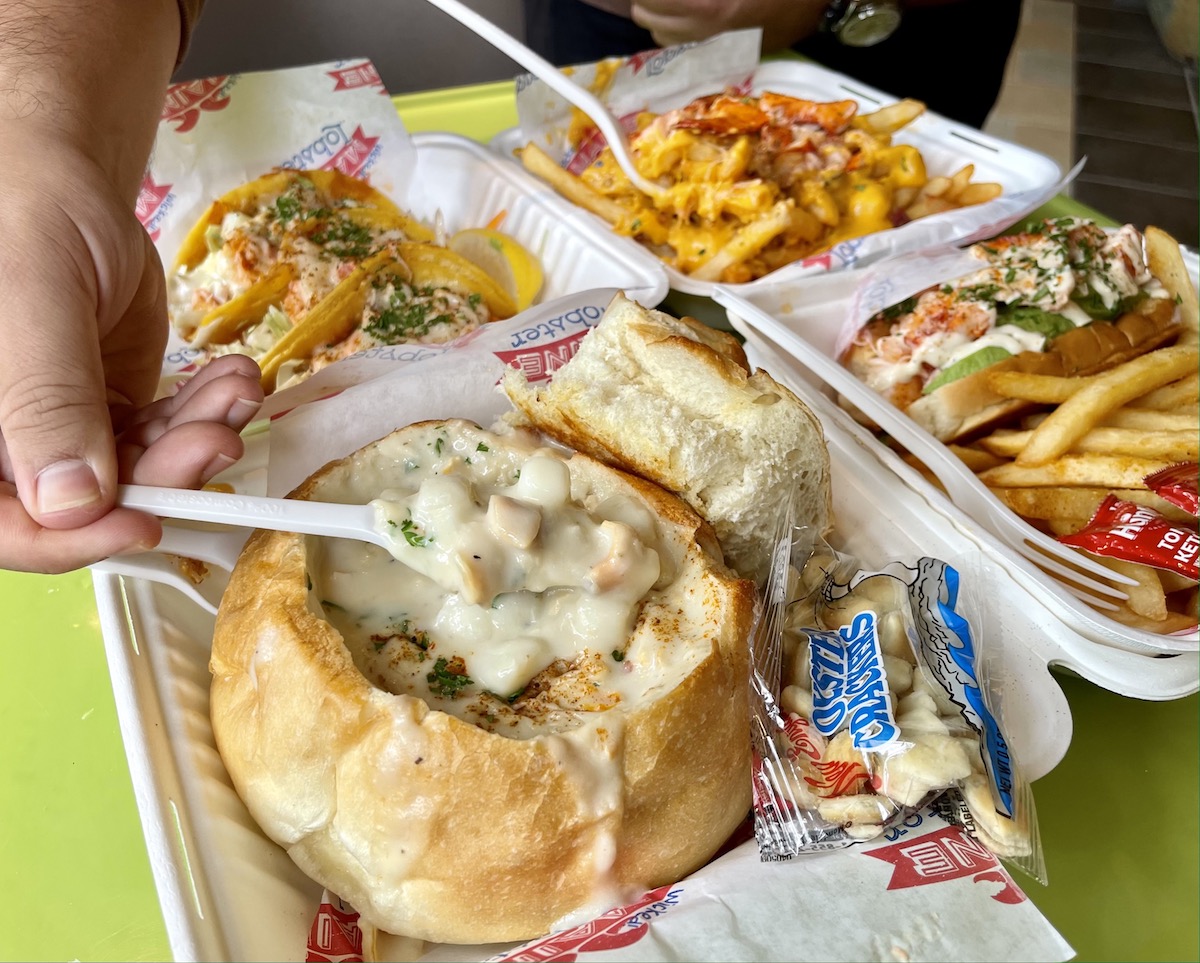 The clam chowder, though. As the rain comes and goes over Waikīkī the creamy dreamy chowder hits the spot in a serious way. Topped with Old Bay and fresh parsley, the warm aroma alone makes our mouths water. My first bite is basically all chunks of tender, peach-colored clam, enough to really enjoy their chew and flavor. It’s giving me small batch vibes, as in not cooked in huge volume but cooked with care, seasoned confidently and with a sublime texture right in between chunky and luscious. We agree that our chowder pet peeves include way too many potatoes, irregular ingredient sizes and general lack of flavor. We are not peeved. We declare our love for this chowder and its sourdough bread bowl, which is not just a nice touch, it’s fresh, with a top that’s been butter-toasted on a griddle so that tearing off fluffy chunks and dunking it is a must.

In between mopping up the chowder I move over to the California lobster roll. As with any lobster roll with a twist that deviates from its pure Maine origins, I’m mildly skeptical. Then I pick up the hot roll and get a whiff. The roll is the best I’ve had so far, a brioche-like bun that’s split and butter-toasted on both sides, producing juxtaposing textures of pillowy and crunchy. The lobster piled on top is steamy and juicy. Wicked Maine uses only claws and knuckles, the nicest chunks of speckled meat. In each bite you get bits of smokey bacon, thin slices of ripe tomato, lettuce, creamy slices of avocado, sweet lobster chunks and a drizzle of tangy aioli. It’s like a BLAT with a lobster upgrade and it’s totally delicious. The careful proportions and treatment of the additions make the lobster sing, and with the buttery roll bringing it all together, I apologize to Thomas and whack the whole thing. The way the lobster is done feels very Maine, the selection and preparation of the veggies feels very California, and the union is just really good.

I thank Wicked Maine Lobster for broadening my lobster roll horizons and for tasty food that evokes memories of other rainy cities in the very best way. I’ll be back for the chowder and the California roll but also want to try the Maine lobster roll and lobster mac and cheese. If you find yourself Waikīkī side and craving a warm chowder hug or a fresh take on the classic lobster roll, pop over to Royal Hawaiian Center.