This new book delights with Korean kitchen adventures and dead-on observations of Island stresses. But food only goes so far in easing the pain of separation and the pining for reconciliation.

Local-centric screwball comedies emotionally grounded in the trauma of immigrant separation aren’t new, but few have shown the panache of Joseph Han’s debut novel, Nuclear Family. The Honolulu-based author, who received a doctorate in English and creative writing at the University of Hawai‘i at Mānoa, is enjoying a shower of awards and recognition for his recently published book, including being named an honoree of the National Book Foundation’s “5 Under 35 2022,” which celebrates the year’s best American literature by younger authors.

The 30-year-old writer’s success comes on its own, but feeds into a Korean artistic moment: Pachinko and its acclaimed 2017 novel, the Oscar-winners Parasite and Minari. But for Han, it all starts with Nora Okja Keller’s Comfort Woman (1997): “It’s one of the first Korean texts about writing Korean in Hawai‘i, in ways I couldn’t have imagined,” he says. His novel’s epigraph is from the book.

In the swirling story, siblings Jacob and Grace Cho duck and cover from audacious plotlines and authorial complications only to end up in a place we all remember, Jan. 13, 2018—the day of Hawai‘i’s false missile alert. The family’s ball-and-chain is Cho’s Delicatessen, a struggling run-of-the-mill trio of restaurants blessed (or cursed) by a visit from Food Network’s Guy Fieri. Jacob’s and Grace’s parents, Appa and Umma, have been chasing the dream of an L&L-style franchise ever since. A college senior, Grace tries to stay constantly high to endure the kitchen grind. She carries twice the burden since Jacob bolted for Seoul to teach English (a vain attempt to avoid being outed to his family).

Then he’s caught trying to defect to the North. His stumble at the DMZ goes viral as he’s held for questioning. Led by tart-tongued church ladies, the Honolulu Korean community deserts the Chos out of embarrassment, while graffiti and a thrown brick wound pride and property. The DMZ stunt isn’t Jacob’s idea; his body has been taken over by the ghost of his deadbeat grandfather, who abandoned their family to start another in the North. Trapped in the South at partition, Tae-woo can’t rest unless he gets back. But the DMZ’s wall is ghost-proof. 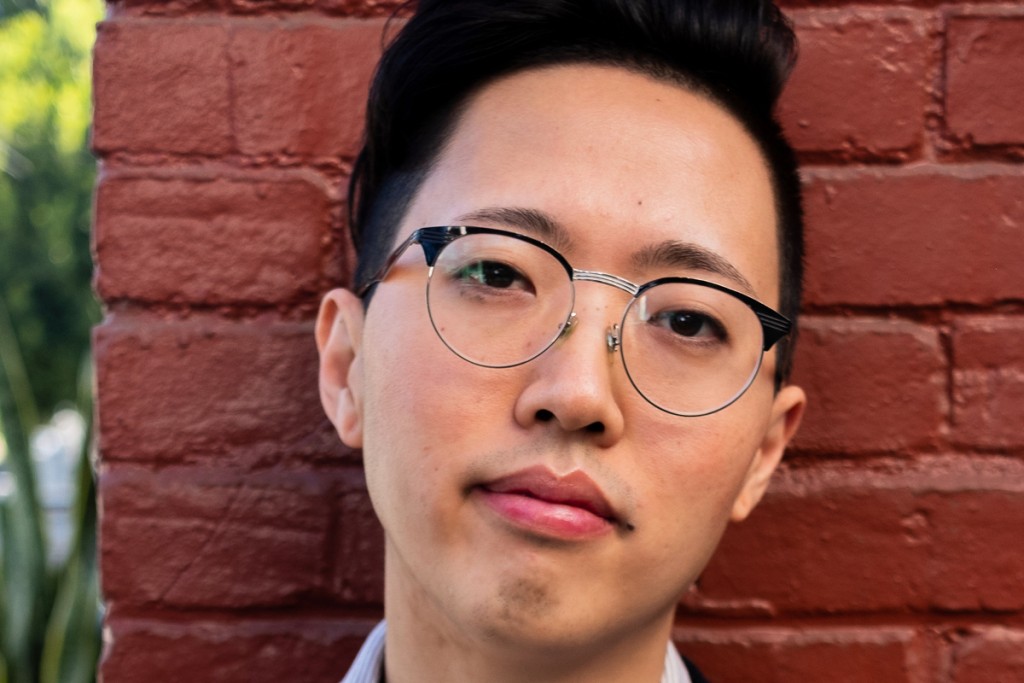 Han’s deadpan depiction of Jacob’s plight is terrific in both senses of the word. Tae-woo has a relentless need to eat, drink and party (while Jacob suffers the hangovers and embarrassment). But his anguished attempt to breach the wall in Jacob’s body feels real. And, indeed, Han’s grandparents immigrated to Hawai‘i and raised him here, leaving his parents back in South Korea. “My grandmother wanted me to gain an English education in Hawai‘i,” Han says. “That was her worldview, very Christian and capitalist. It was difficult for me to endure that separation. That informed how I understood the divisions in Korea, the American occupation, the division posed by the English language for my entire life, preventing me from knowing my own family.”

When his parents did finally join him, they took hard jobs, suffering from language alienation and racism. Once, Han’s cabbie father was severely beaten by a soldier who refused to pay his fare; the beating landed him in the hospital for two weeks. “The rage I felt in seeing my father in the hospital became one of the most important teachers in my life,” he says. That time became a catalyst for writing. His parents would return to South Korea. “The heart of the story hopefully poses a path of reconciliation and reunification,” Han says, and “how we can move forward finding peace in our lives, rather than finding peace in heaven.”

Dan Smetanka, editor-in-chief of Counterpoint Press, which published Nuclear Family, says he knew he was reading something special when he first came across Han’s novel. “He manages to balance serious, important issues like family history and identity and migration with an extremely sharp and funny eye,” Smetanka says. “It’s a startling, evocative debut.”

Nuclear Family came out in June from Counterpoint Press and is available in bookstores and online, including at counterpointpress.com