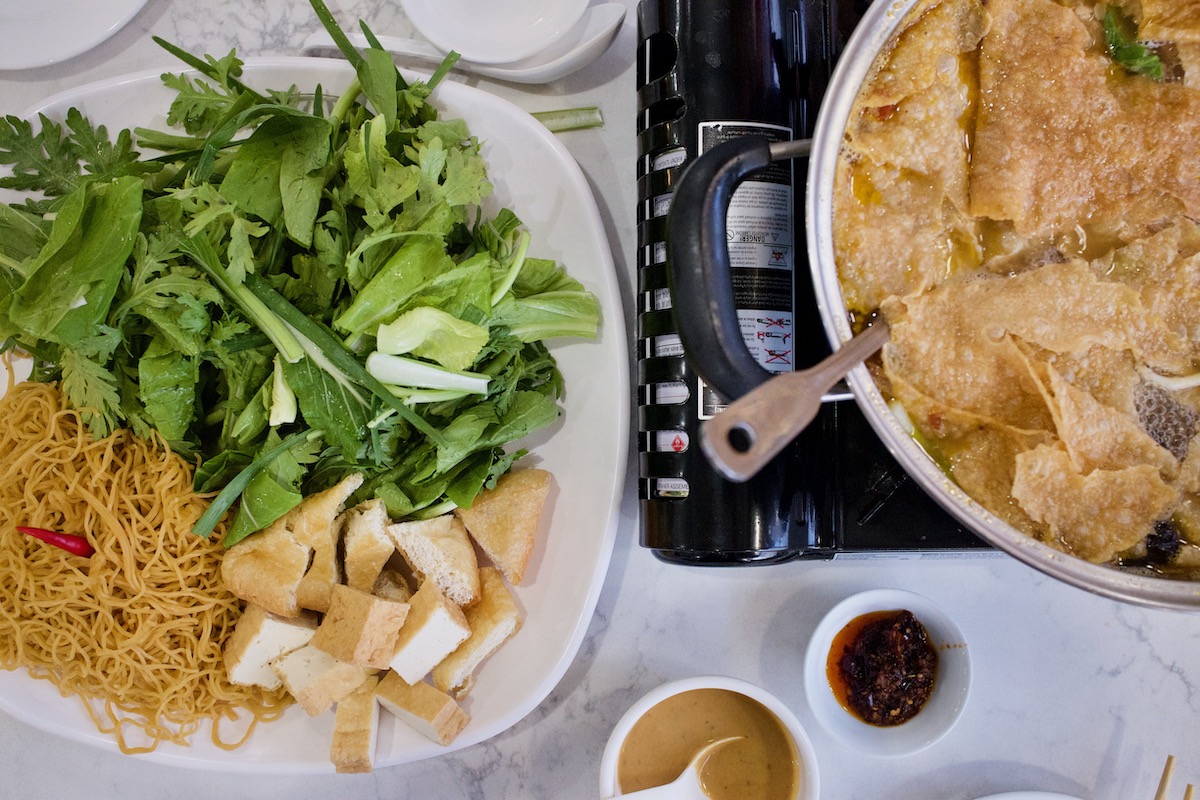 The goat hot pot caught my eye. Actually, there was a whole menu page devoted to goat: the hot pot, goat meat curry, stir-fried goat meat with five spices, goat meat salad, grilled goat meat. “Do you always just walk through Chinatown, looking at menus?” asked my colleague Mari Taketa when I told her I spotted goat hot pot at Pho Que Huong. Um, yes? Especially when it says goat. And when the 113-item menu also includes a whole roast catfish and whole fried fish and so many more uncommon items (like beef testicles).

Even though there are all the usual suspects—pho, banh mi, bun—I’ve come to think of Pho Que Huong as the place for special occasion Vietnamese food. For when you want to gather a bunch of friends and dive into dishes made for sharing, many of which you can’t get anywhere else in Hawai‘i. Last week, during Pho Que Huong’s fourth anniversary, large parties all around us passed noodles down the table and reached across each other to dip meats into a pho hot pot and bundle herbs into sheets of rice paper. 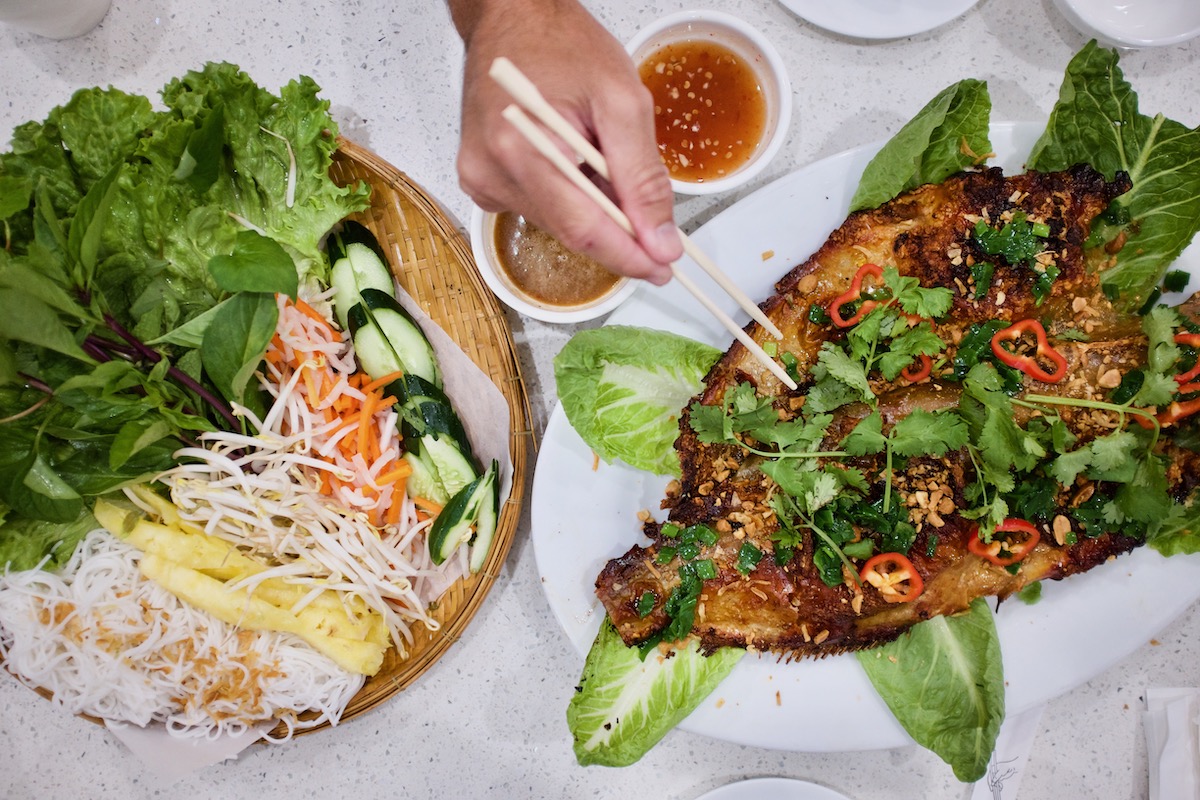 Meanwhile, two of us tackled an almost comically large catfish, splayed open and emerging from the oven with a burnished, crackly skin as crisp as the skin on roast pork. It was tempting to just lift all the skin off and eat it like chicharrones, but I saved a few pieces to wrap with rice paper and all the accompaniments—a tray overflowing with fresh herbs, pickled daikon and carrot, and even thin spears of pineapple. In contrast, the meat underneath was a bit of a disappointment—though flaky and rich, it lacked seasoning, though this was easily fixed with a dip in the pungent anchovy sauce provided. The fish must be ordered at least an hour in advance, and it’s offered at market price—when we went, the platter, large enough for four, was $70. 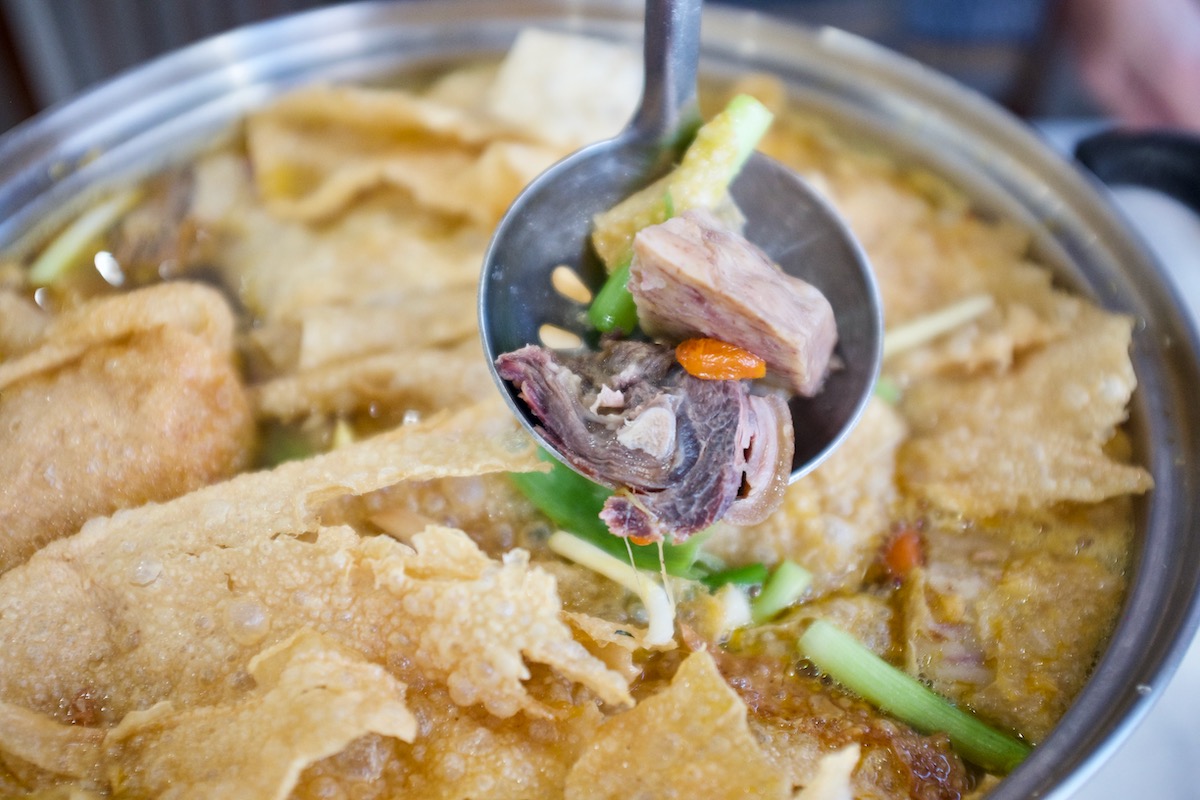 Then there’s the dish I came for: the goat hot pot ($58). Amidst the sea of hot pot restaurants in Honolulu, there isn’t one like this. An herbal Chinese broth is flavored with goji berries; codonopsis, a root similar to ginseng; and dried longan. It arrives packed with tender pieces of braised goat on the bone (some even with skin attached), as well as lotus root and taro, and blanketed with sheets of fried tofu skin, softening into the soup. You have to eat in order to make room in the pot for the accompanying greens—chrysanthemum and mustard cabbage—and egg noodles. The broth is flavorful enough on its own, but we’re mesmerized by the silky dipping sauce made from fermented bean curd, the type used as a condiment for congee or stir-fried with leafy greens. It’s creamy and salty, just slightly sweet and reminiscent of cheese. We ask for extra when we pack our leftovers (there are a lot—the hot pot would easily feed four).

SEE ALSO: At Super Pho in Kaimukī, Seven Courses of Beef is a 40 Dollar Feast for Two 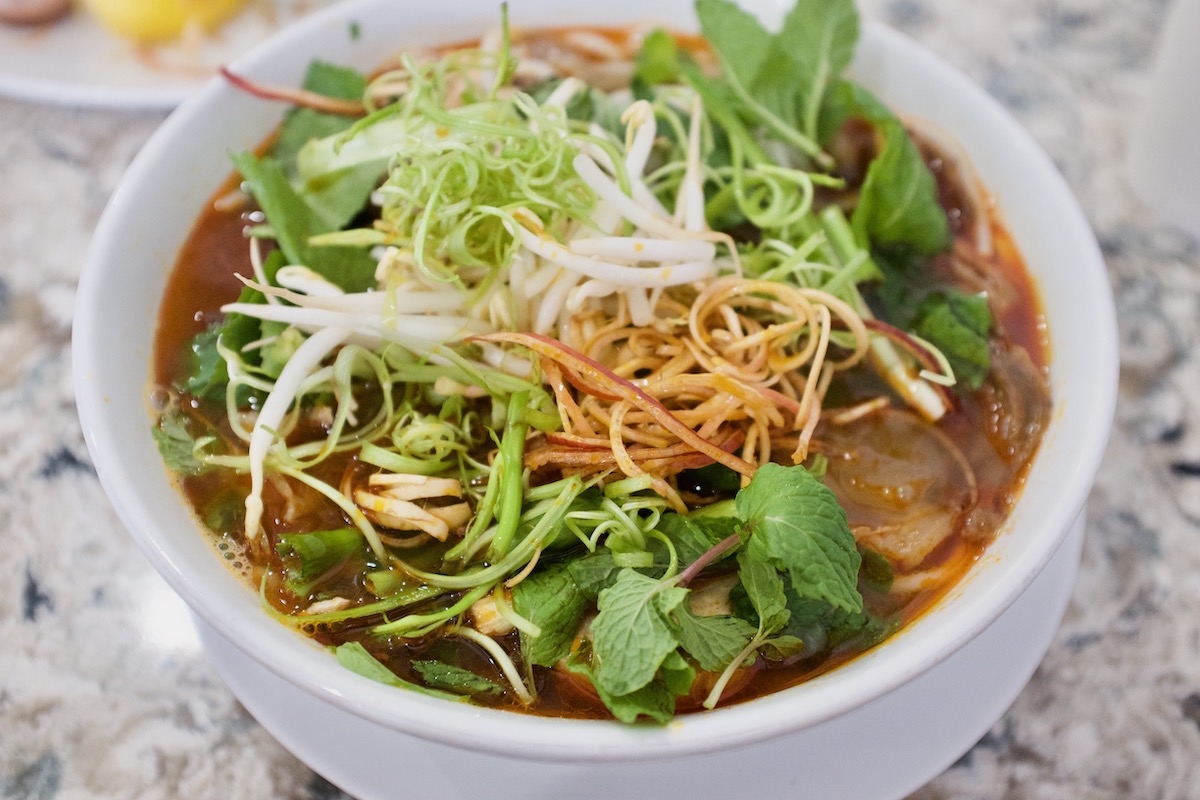 Subsequent visits reveal that the more common dishes at Pho Que Huong lack the excitement of the fish and hot pot. Though the bun bo hue ($15), or spicy beef noodle soup, is unlike others around town, with beef shank, ham, pig feet and pig blood, the broth tastes surprisingly thin and flat. The shredded banana blossom and ong choy help freshen it up. Meanwhile, the lotus root salad veers sweet and the fried quail salty. But with 113 items, not everything can be hits. My advice: Stick to the wraps and the hot pots, and finish with dessert. The che ba mau ($6) is my go-to, like a Vietnamese halo halo, with three types of beans (red bean, mung, and black-eyed peas) topped with pandan jelly, coconut milk and crushed ice. Even going up to the cash register after eating is always an adventure, the counter crowded with freshly made desserts cooling off and, on a recent weekend, packages of sweet and savory puffed rice mixed with rousong (dried shredded pork). For the adventurous and curious, there is plenty to discover at Pho Que Huong.

Among the fearless wāhine who charged in the big-wave surf contest: a mom-paramedic, environmental and LGBTQ+ activists, a huntress and equal rights warriors.