The Kaka‘ako hot spot just reopened with a new chef, revamped brunch and dinner lineups, and a revolving slate of noodle soups.

Good news for fans of Honolulu’s eclectic dining scene: Piggy Smalls, a Kaka‘ako eatery shuttered for most of the pandemic, reopened last week with a new chef and menu, and a permanent rotating lineup of two Vietnamese noodle soups a day, six days a week. That’s 12 in all weekly, about half of them not found elsewhere in Hawai‘i. 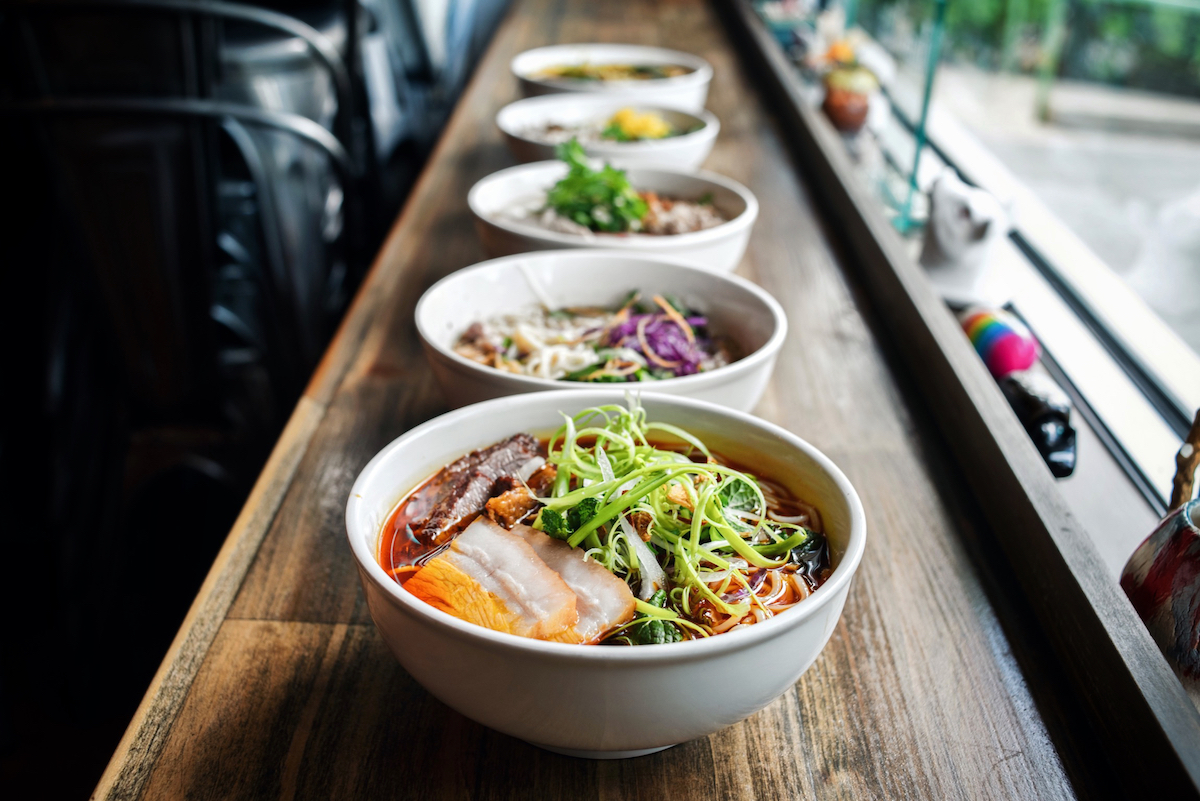 Many Vietnamese eateries pride themselves on their pho; occasionally you’ll also see spicy, beefy bun bo hue, or a version of bun rieu with minced paddy crab and tomatoes. In rare instances you might find lemongrass-and-annatto-laced bo kho beef stew with crusty baguettes or wide rice noodles. No place I know does 12 noodle soups, and certainly not 12 from the distinct cuisines of Vietnam’s north, south and central regions. The recipes are from Loan Le, a.k.a. Mama to founding chef Andrew Le of Piggy Smalls and The Pig & The Lady, bequeathed over the years in parsed-out lessons to Le and Kristene Moon. It is Moon—a teenage culinary student when she started out at Pig’s farmers market stand eight years ago—who is the new executive chef of Piggy Smalls.

The new menu defies easy categorization. It’s largely Vietnamese-based, part modern Hawai‘i-American, part global. Moon wanted the noodle soups at the core, Le says, but nearly the rest of the menu has been revamped with her own handmade pasta creations, dishes inspired by her Korean heritage and new desserts. The popular vegan pho remains, as does the Burmese tea leaf salad; little else is familiar. A new budae chige army stew ($35 for a family-size pot) has American cheese melting into a tangy kim chee broth studded with Vienna sausages, ramen noodles and pork belly. Grilled meats and whole branzino with olive-and-preserved-lemon relish feature at dinner. New pastas on the dinner menu include an uni, anchovy and garlic spaghetti ($29); a ricotta cavatelli with fennel sausage, Parmesan and black truffle butter ($23); and a braised chicken and mushroom pappardelle scented with Douglas fir ($21).

SEE ALSO: The Pig & The Lady: From Farmers Market Pop-Up to the City’s Hottest Restaurant

Piggy Smalls opens for dinner Tuesday through Saturday from 4 to 9 p.m. On Saturday and Sunday there is brunch from 10 a.m. to 2:30 p.m. Lunch will follow at some point. When Le invited me for a preview tasting, I was expecting two or three dishes. I think I tried 14. It turned out the kitchen was doing a test run of much of the menu, which is how I got treated to the heady sight and smells of nine broths simmering on the cooktop. It got dizzying, with dishes being run out often simultaneously by Le, Moon and pastry chef Kelsey Takara. Here’s an early sampling. 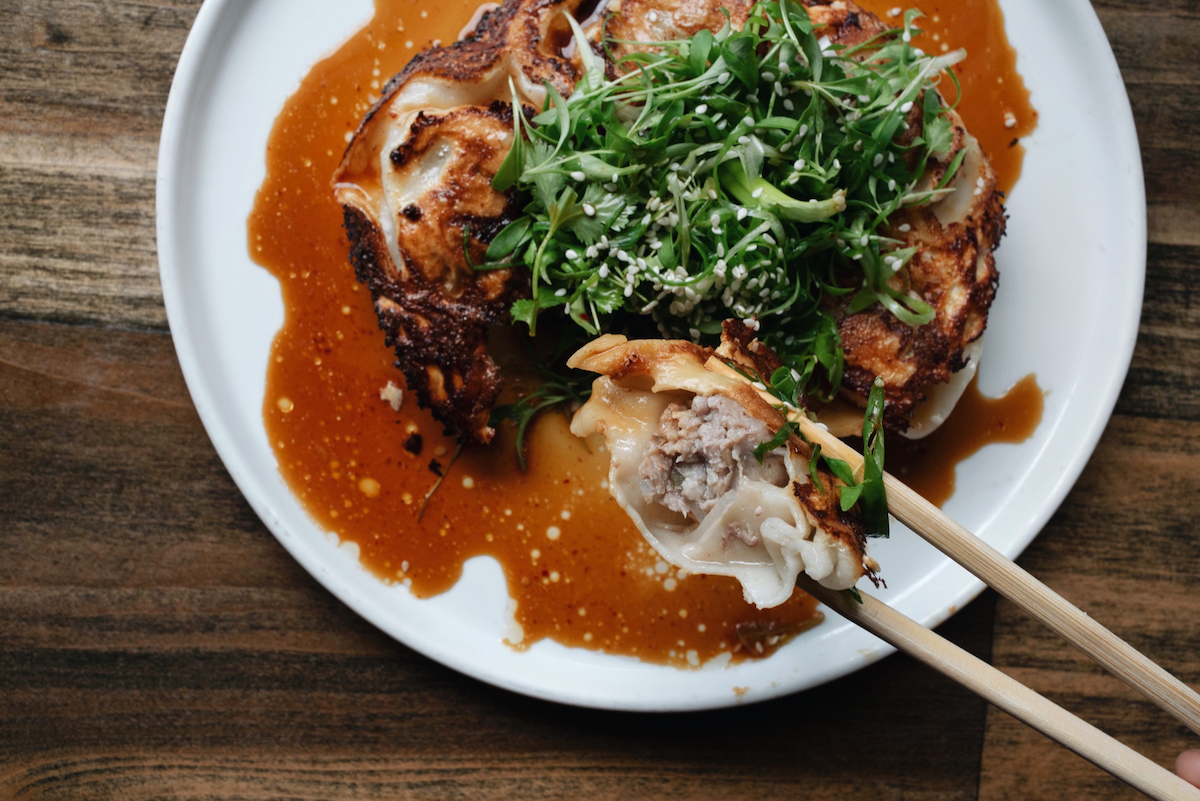 The mandoo is Moon’s recipe, so it comes with a skirt of crispy cheese curds, but Moon’s mother hand-wrapped 400 of the dumplings. This is a dinner and brunch item ($13). Also at weekend brunch you’ll find the army stew, crispy butter pancakes, churro French toast 2.0, ʻahi tostada with chile vinaigrette, pizza bagels, Jerusalem bagel sandwiches, and a skillet bake of seven miniature pani popo buns swirled with Okinawan sweet potato jam, brown sugar and coconut and baked in a coconut sauce. 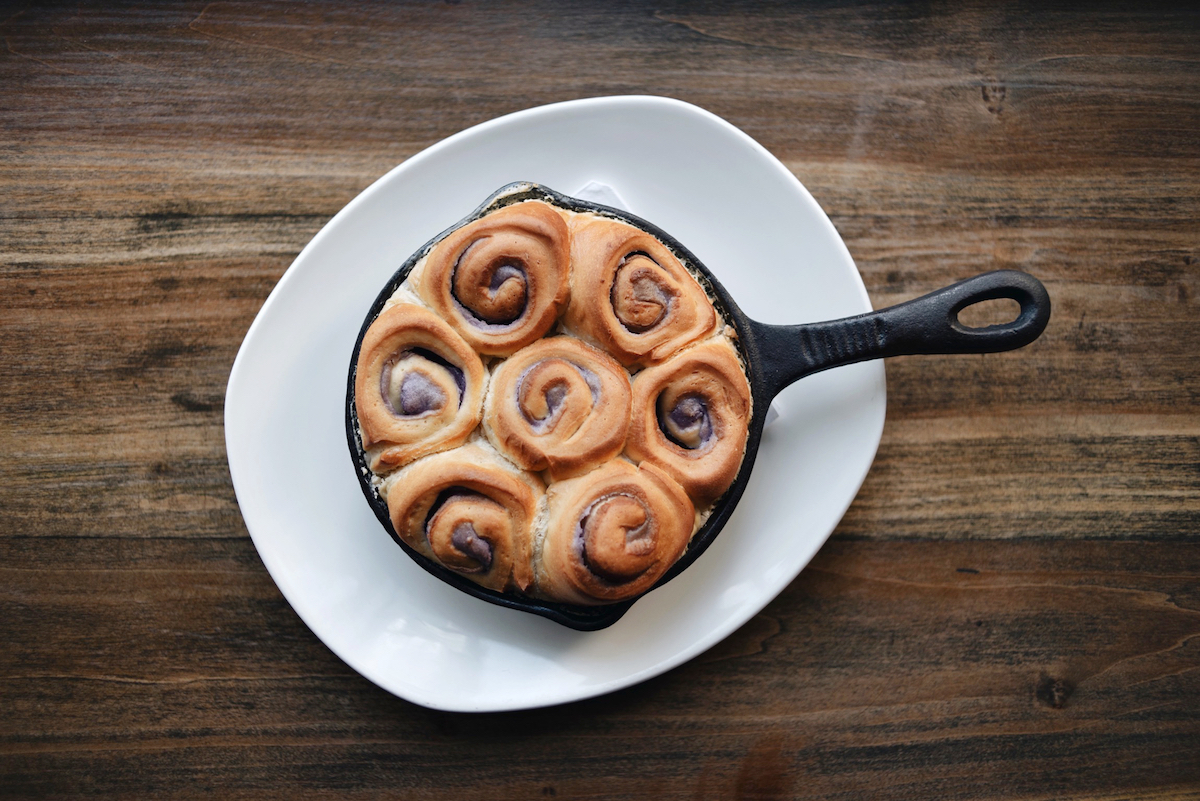 Pho ga topped with fistfuls of shredded J. Ludovico Farm chicken was on the old menu; this one is upgraded with the addition of tender chicken livers and crunchy gizzards. The organ meats take it to the next level.

SEE ALSO: Pig & The Lady: Not Just a Personal Addiction 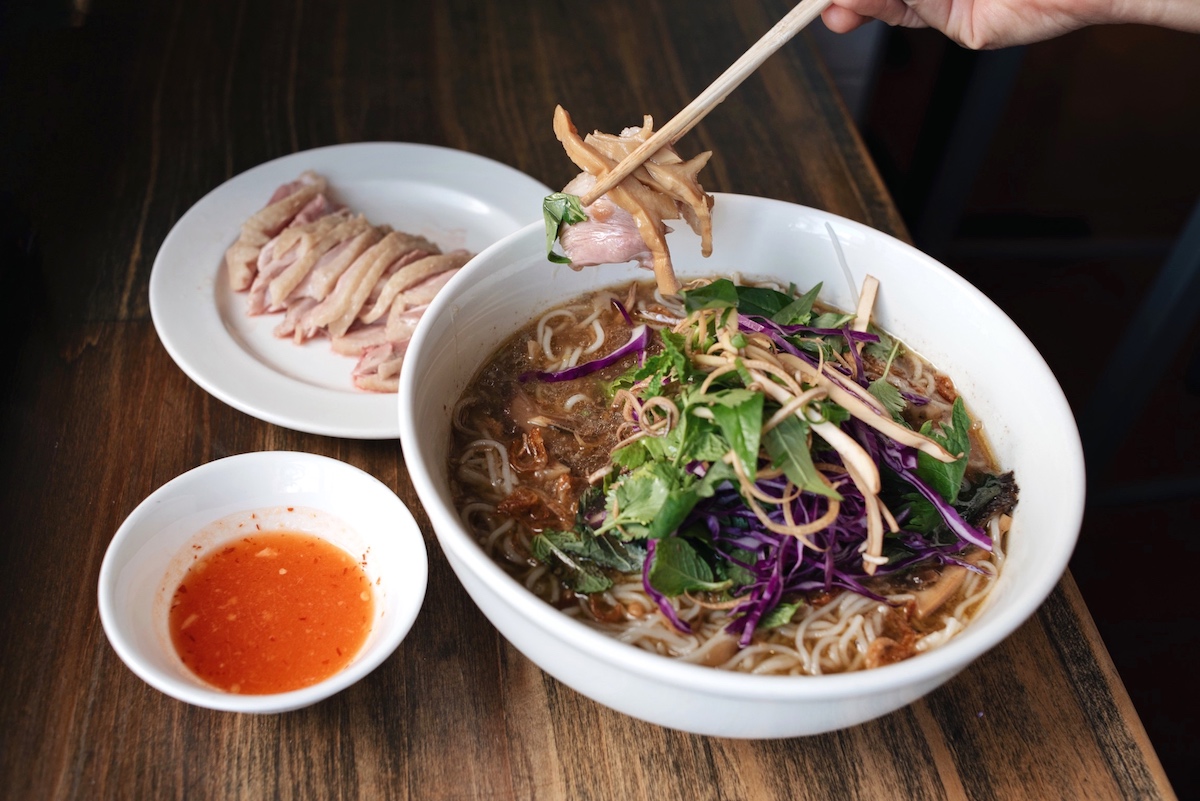 Bun thai was the first new soup I tasted; it is a new favorite. Le discovered this at the stall of a renowned noodle soup lady in Ho Chi Minh City, and watching the crowds form, then dissipate when the last bowl of soup had been sold, stuck with him. “We want every bowl to be a signature bowl,” he says. “So you might come here for the chicken pho, but if it’s not the day for chicken pho, you’re still gonna be happy with the bun thai or the oxtail bo kho.” 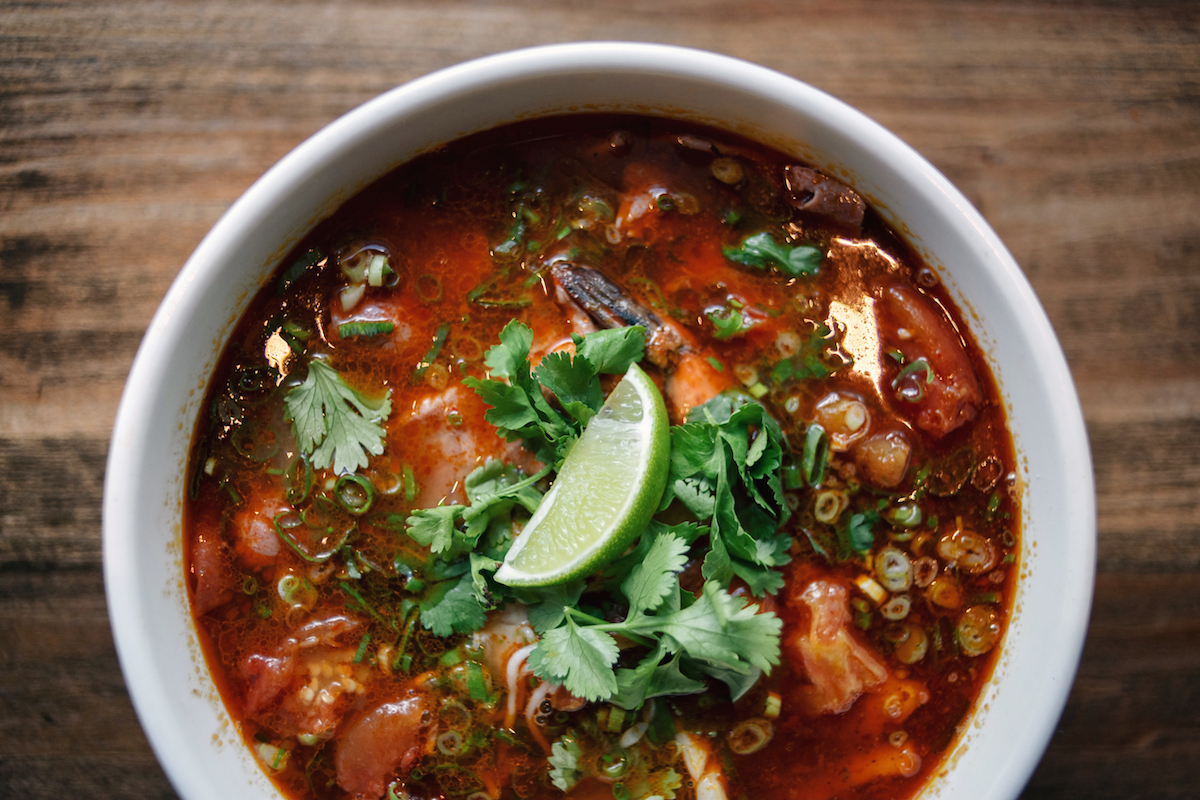 This bun thai, a Vietnamese take on Thai flavors, opens with the scents of lemongrass and galangal, then the spicy, sweet-sour broth, and finally a finishing hint of shrimp. Whole shrimps appear from the tangy soup, with strips of squid and beef.

Another new favorite is this, cao lau from Hoi An. The central port city was busy with traders from China and Japan centuries ago, which explains the chewy udon-like noodles (these are from Sun Noodle) and sweetened soy-based broth. Japanophiles will find it a close equivalent to mazemen dry noodles. You mix together noodles and broth with fresh greens, Pono Pork meat, crispy fried lumpia wrappers and crushed peanuts. 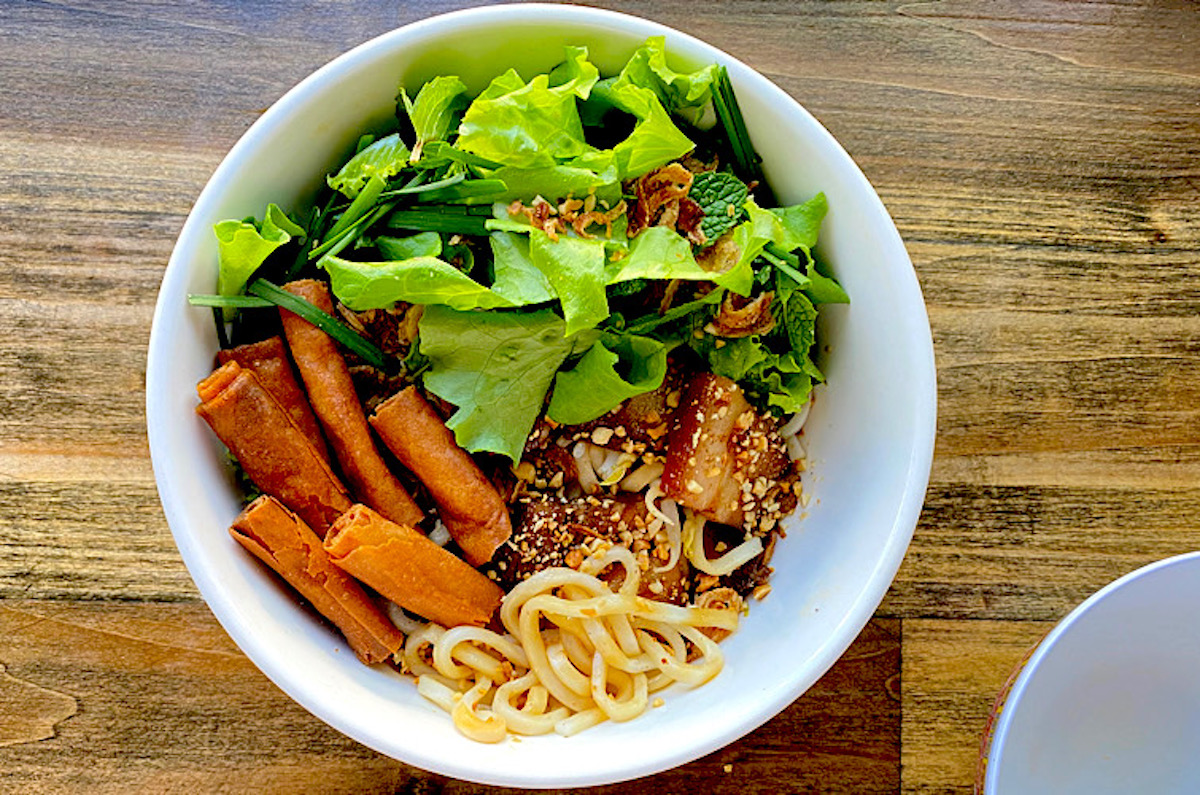 Hu tieu and bun thang are the lightest soups of the 12, clean with hints of pork and shrimp. The smoked pork atop this bowl lends its smokiness to the broth, a nice touch.

SEE ALSO: So This Happened at Piggy Smalls. Here’s What Obama Ate

This curry soup with braised chicken wing is a Le invention, something his brother Alex, who manages the farmers market and catering operations, calls an Indonesian-Viet mashup. It is as coconut-rich as it looks, with strong curry flavor anchored by spices including turmeric, though without as much heat as you might expect. 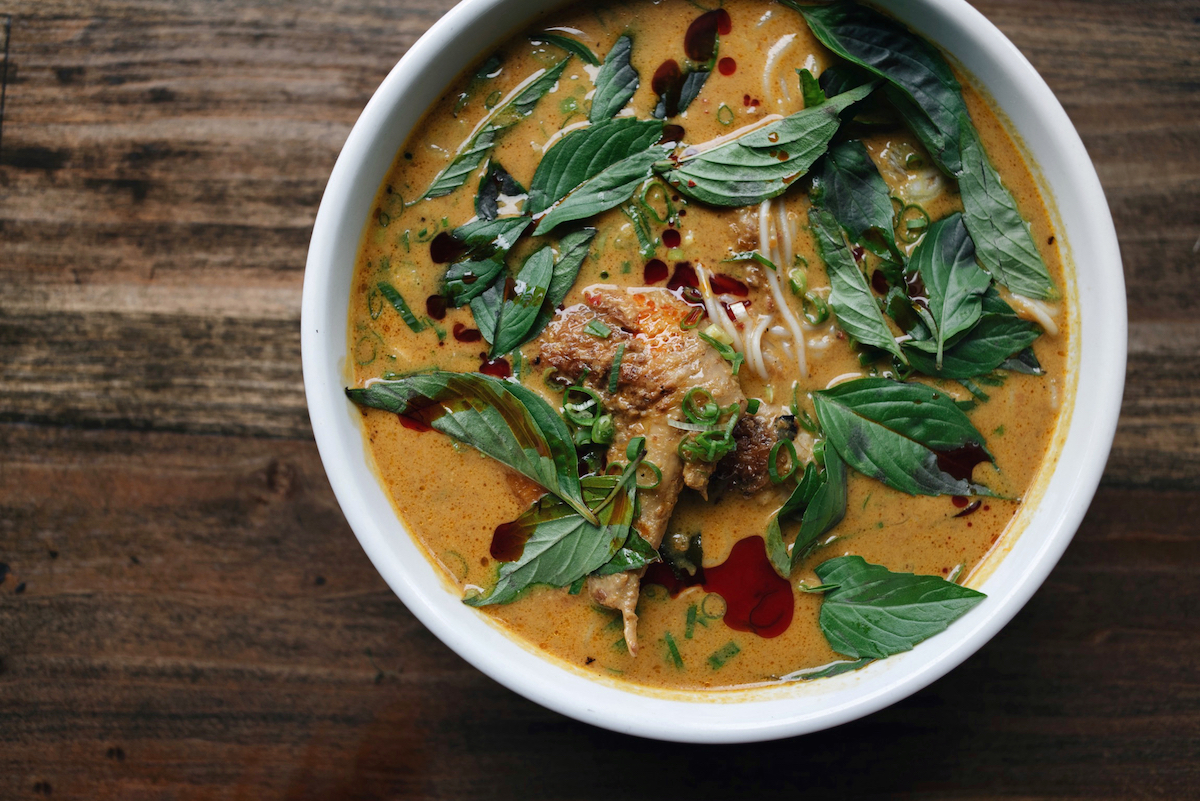 I love bo kho. I loved the thinnest, soupiest version I ever tasted, from a tent on a street corner in Hoi An; and I love the pungent, richly red version made by Pig. Bo kho is a rare find anywhere in Hawaiʻi, including at Pig’s farmers market booth, where it only makes an appearance every few months. That’s one of the beauties of the rotating noodle soups: Dishes like bo kho, with giant rounds of meaty oxtails and chunks of braised carrots and tomatoes, will be available every week. 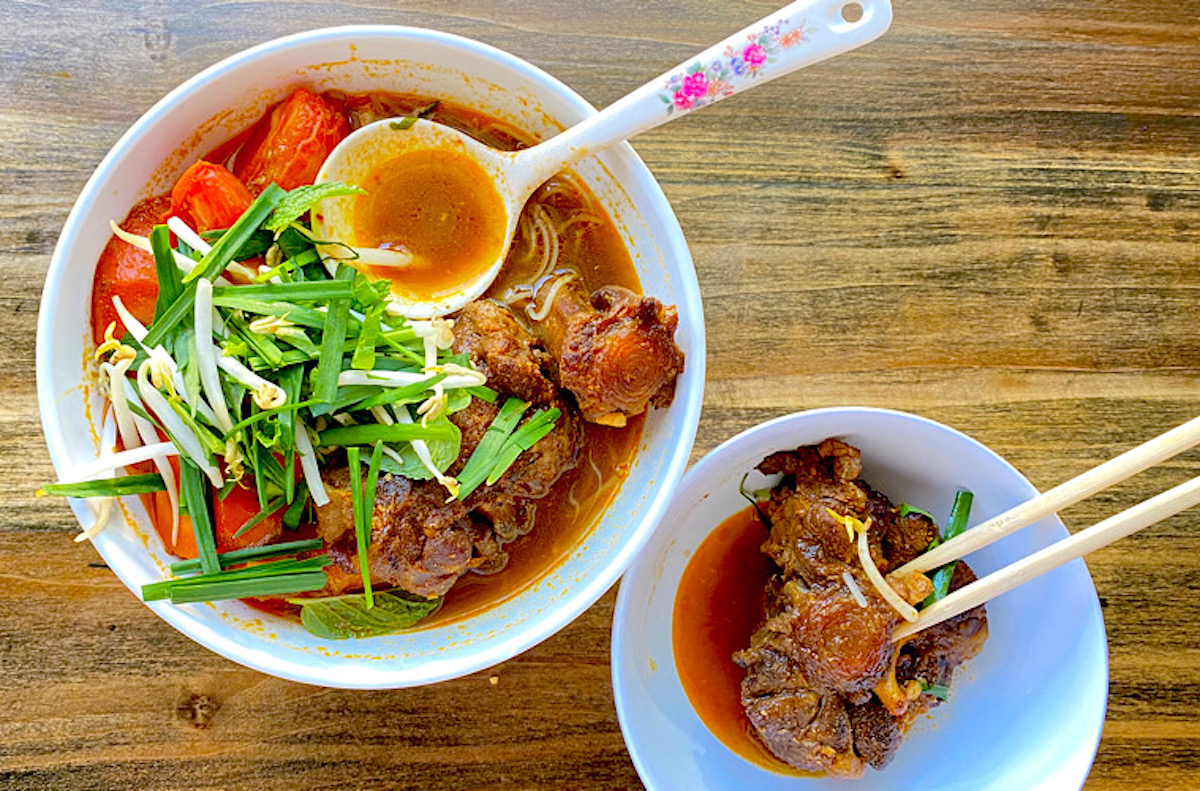 Smalls’ new signature dessert is a take on a shave ice dessert that Le served at this year’s Hawaiʻi Food and Wine Festival. The different flavors emerge as you chew: basil seeds, black-eyed peas and coconut jellies under a swirl of pandan-mung bean custard soft serve and coconut sorbet, doused with pineapple syrup under a cap of salted coconut cream and toasted ʻinamona. It’s $9. There’s also a creamy, light Basque-style cheesecake made with Laughing Cow cheese, a nod to Vietnamese street food carts where the soft rounds are popular; and a lemon tart.

Noodle soups aside, the menu feels fresh and exuberant, which is a large part of why I like the Pig restaurants. Says Le, “We’re just happy we’re not just cooking takeout any more.”