At Super Pho in Kaimukī, Seven Courses of Beef is a 40 Dollar Feast for Two 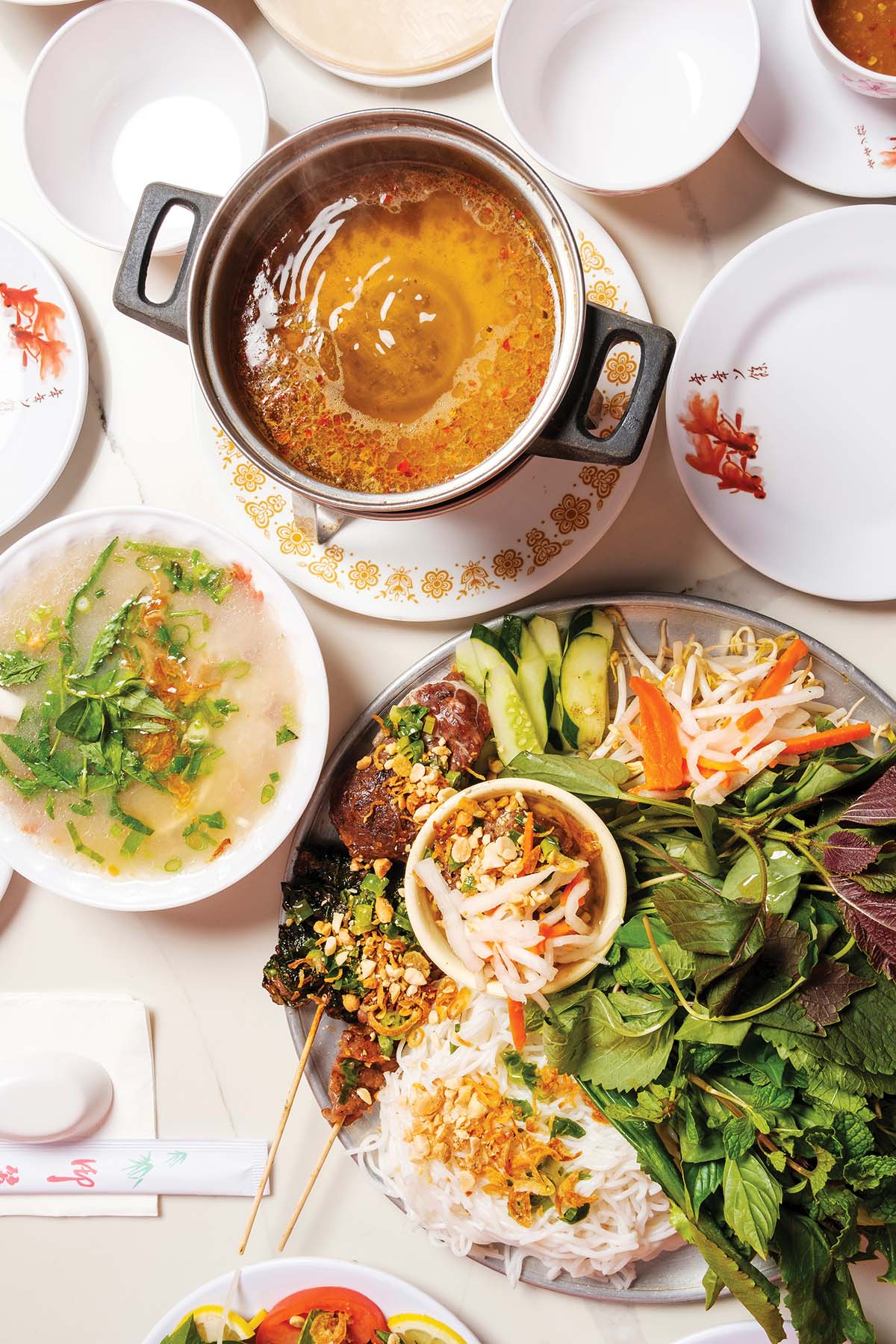 Bo bay mon, or seven courses of beef, is not the orgy of beef you might expect. What I love about it: It feels special enough to be festive, what with the lavish variety, the wrapping of rolls tableside and dipping thin slices of beef into a vinegar fondue, and yet it’s surprisingly refreshing and comforting for everyday meals, with the heaps of fresh herbs, lettuce and pickles, and a soothing finish of congee. The beef is treated more as a condiment, harkening back to when meat was considered a luxury—the bo bay mon tradition dates to 1930 when the restaurant Au Pagolac opened in Ho Chi Minh City, Vietnam.

In Honolulu, where bo bay mon disappeared after A Little Bit of Saigon stopped serving it in the 1990s, it made a comeback when Super Pho in Kaimukī opened nineteen years ago. (Until recently, when a former employee of Super Pho opened Da Best Pho in Market City with a similar menu, it was the only restaurant to serve bo bay mon on the island.) 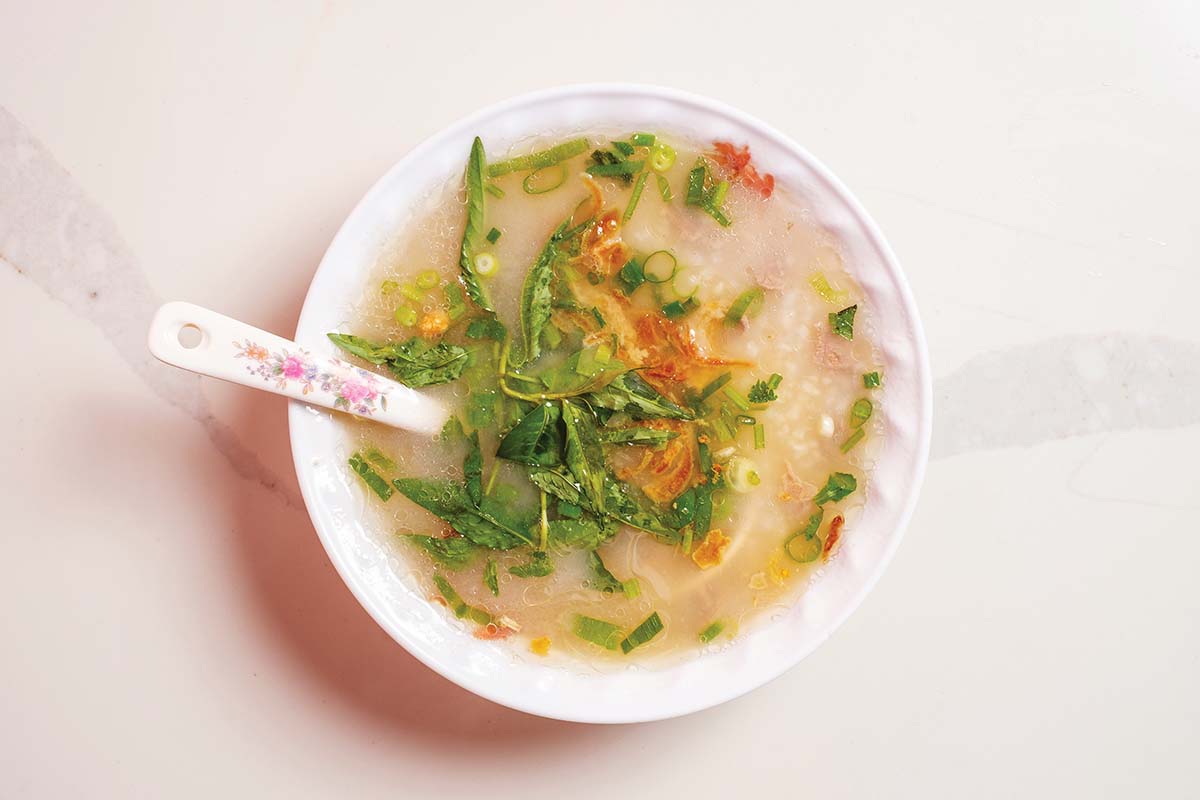 The seven courses of beef can vary, but they usually highlight various cooking techniques, much like Japanese kaiseki. At Super Pho, where the bo bay mon is $40 for two, it begins with a beef salad, thin rare slices of cooked beef tossed with equally thin slices of lemon, rind and all, a fistful of torn rau ram (Vietnamese coriander), onions, peanuts, fried shallots. And what really makes it a salad you can’t get enough of—a sprinkling of sugary pork dust and ethereally fried skin on top.

Courses two, three, four and five arrive on a large platter overflowing with herbs, including culantro, purple shiso and mint. And then there’s lettuce, cucumbers, vermicelli and pickled daikon, which you’re meant to roll into rounds of rice paper with the beef. Or not: I also enjoyed treating the DIY rolls more like bites of salad while eating the beef separately, the better to taste the nuances. Here, it’s prepared as a steamed meatloaf and various grilled preparations: skewers, meatballs wrapped in tissue-thin caul fat, and beef wrapped in la lot leaves. The traditional dipping sauce for your rolls is mam nem, a fermented anchovy sauce that Super Pho makes with lemongrass, ginger and fresh pineapple. But if it’s too potent for you, you can also ask for the more familiar nuoc cham.

SEE ALSO: Our Go-to: Chilly Weather Bowls of Soup in Honolulu that Soothe the Soul 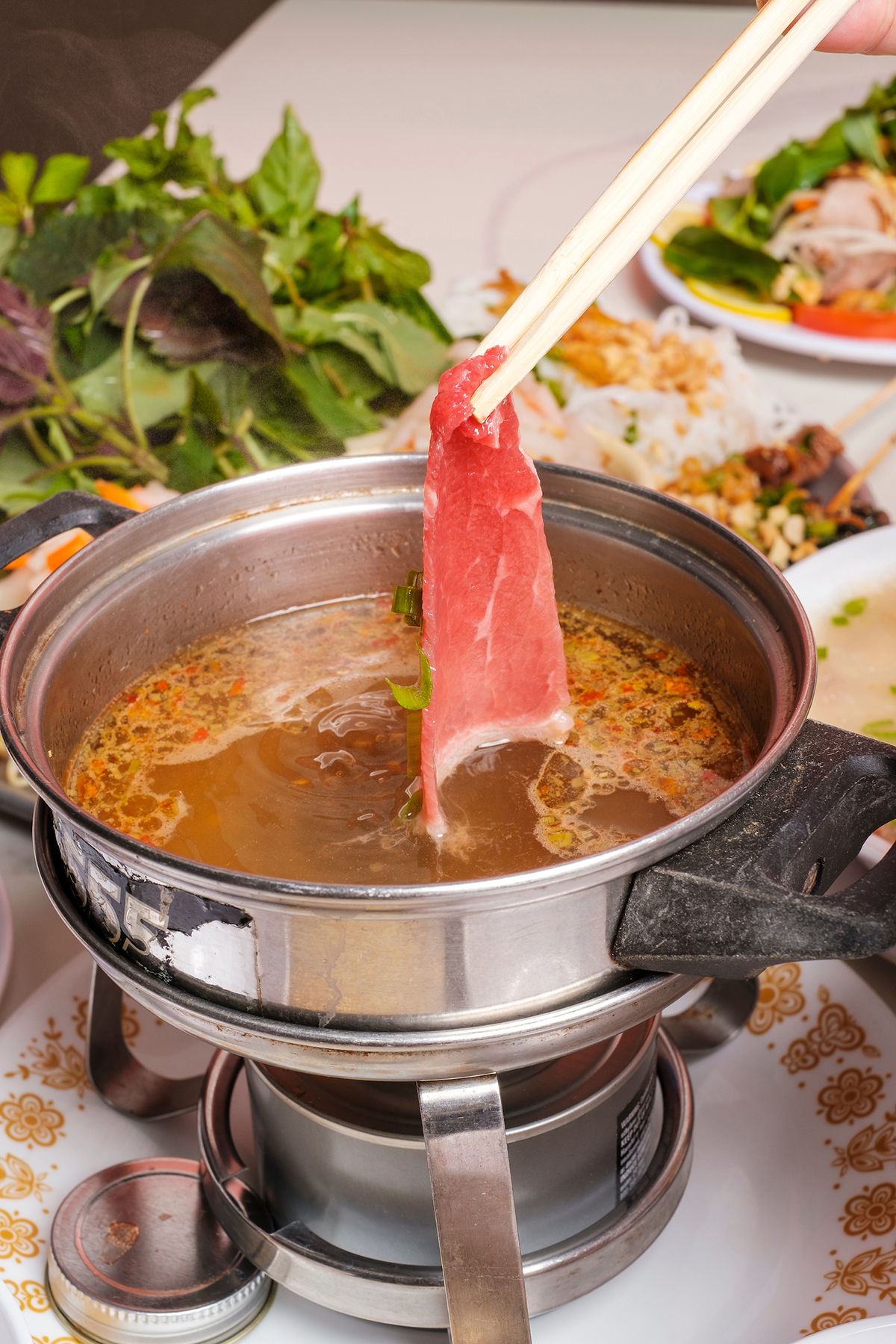 Then, course six, beef fondue—a carpaccio of beef arrives, and a Sterno-fueled pot of vinegary broth. And to finish, a warming beef congee.

My friend and I had originally stepped into Super Pho for noodle soup. I had seen bo bay mon on the menu for years, but always said I’d get it “next time.” Finally, this time, we said, if not now, then when? It shook us out of our routine and delighted us on an otherwise mundane weekday. And all that for not much more than the price of two bowls of pho.

Angel Le Tran, Super Pho’s manager, said bò 7 món has been popular ever since the restaurant opened, and the day I talked to him, a couple from Colorado had ordered it—just two days after they arrived in Honolulu, when they also ate it. “People get it first thing when we open at 10 a.m. and late night at 9:30 p.m. with wine and beer,” he says. He remembers eating it when he was a child in Ho Chi Minh City, and though at one time it was reserved for special occasions like weddings, given the cost of beef, it has since become one of Vietnam’s most beloved foods, in part because “it’s just really fun.”