Editor’s note: Originally published in February 2021, this post became a classic when poke aficionados looking for insider tips made it one of our most-read articles of the last two years. 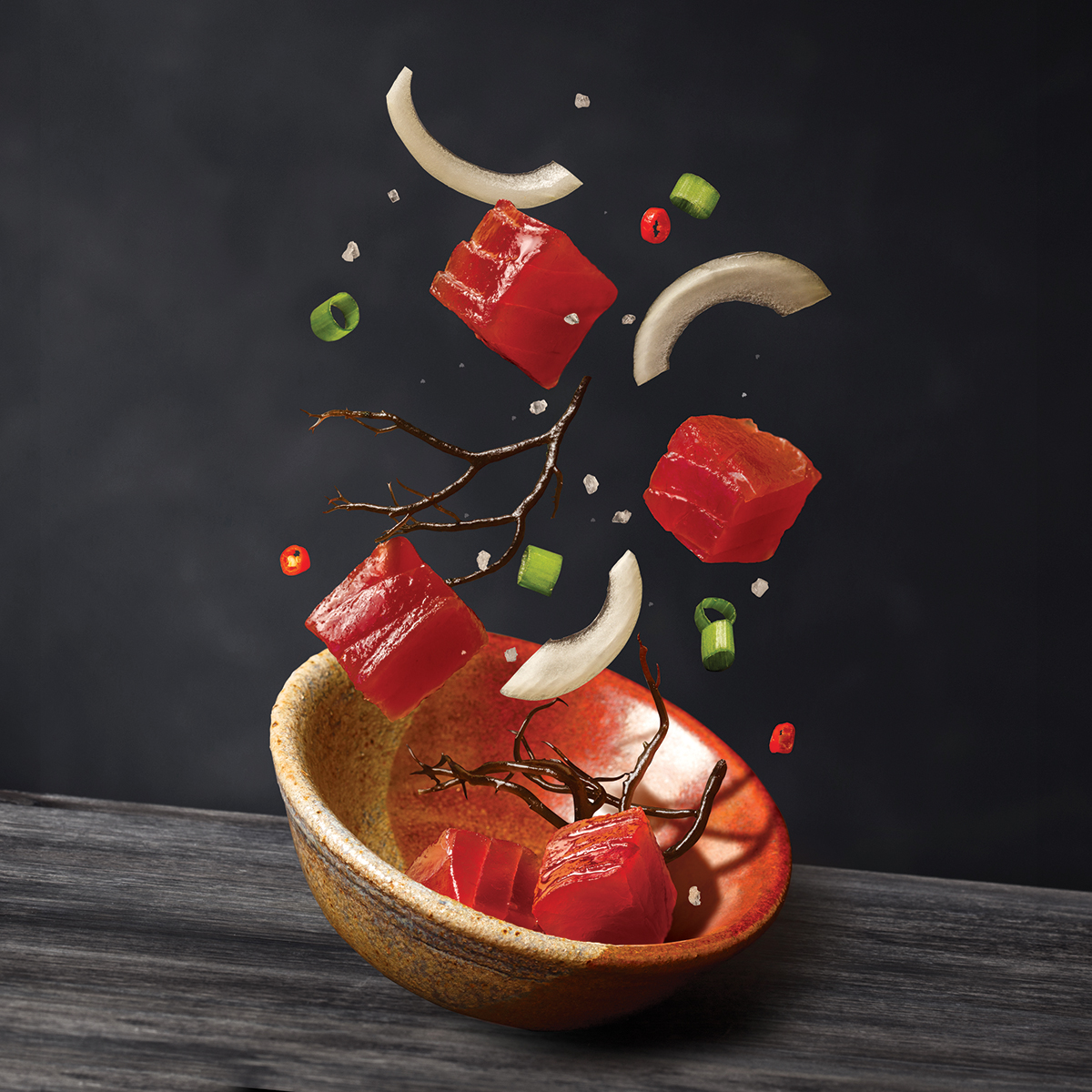 Spoon it over rice, pair it with poi or dig into a quarter-pound container after a surf session: No matter how you eat it, there’s something comforting about cubes of fish mixed with sea salt, limu, ‘inamona or green onions. 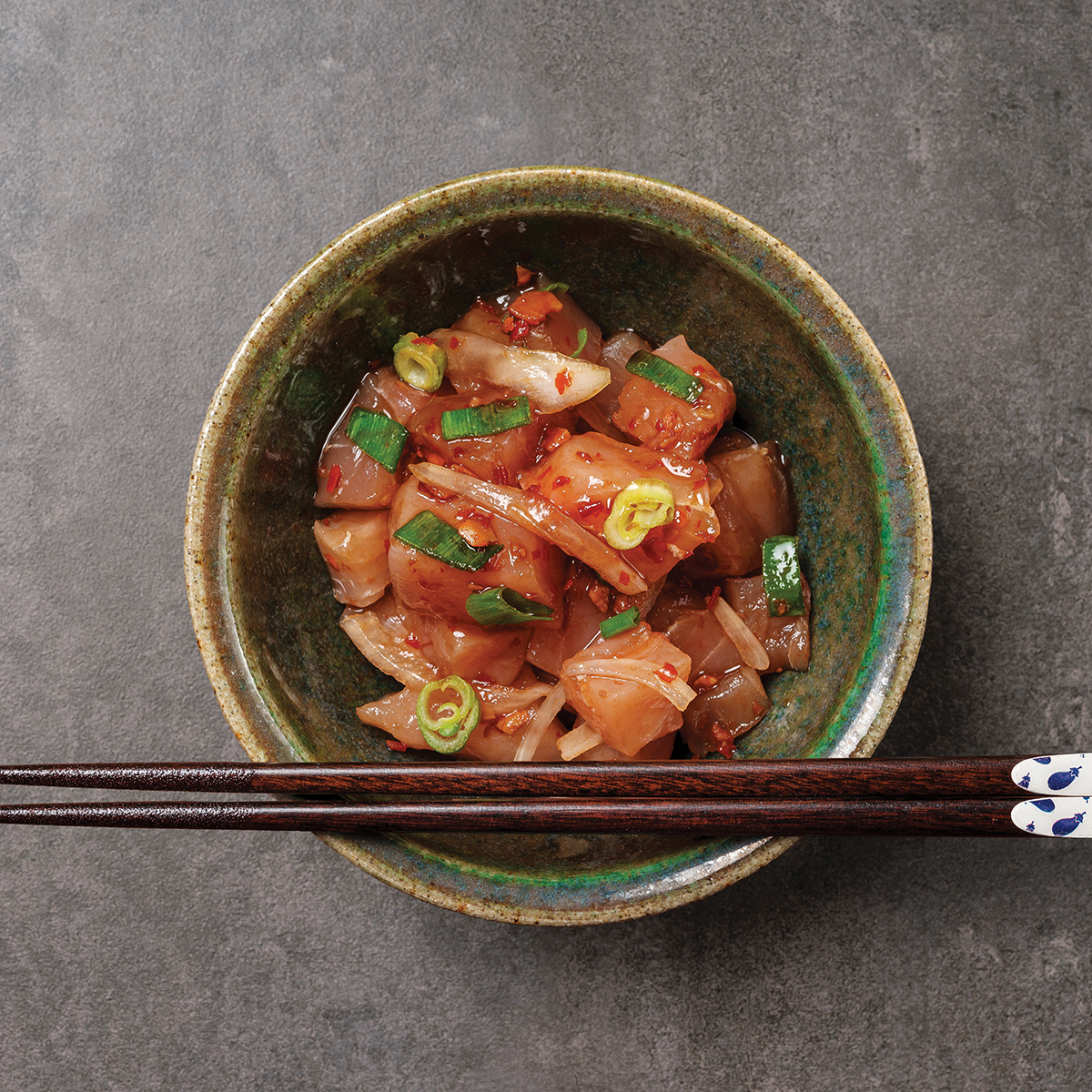 Ken and Melanie Broad went from selling their daily hauls to wholesalers to cooking up samples at a roadside stand to teach customers about their catches. Now the husband-and-wife team dishes out nothing but fresh fish, as crispy katsu, sashimi and, of course, poke from a quaint green wood building in Lā‘ie. Ken is “kind of ‘ahi-ed out,” so, he prefers their oyster chile marlin, available when he or another fisherman brings in a marlin. “It’s a little tangy, a little sweet and a lot of flavor.” –CY 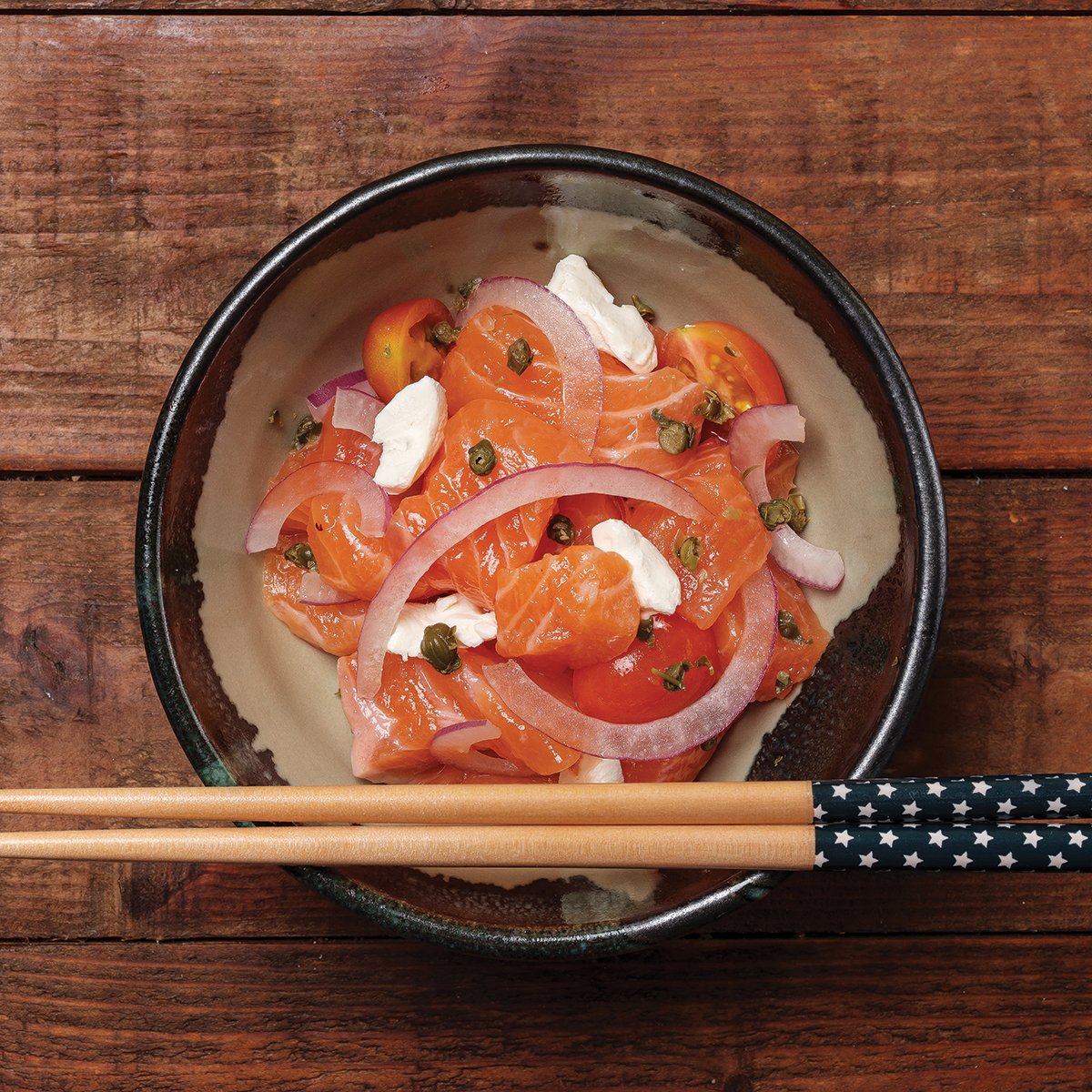 It’s time to put cheese on your poke. Hear me out: The latest flavor at Redfish’s premixed poke counter, lox poke, is already one of chef de cuisine Reid Matsumura’s favorites. Ho Farms tomatoes, thinly shaved red onions, briny capers and cream cheese are mixed with raw salmon. Top it with house-made everything seasoning—poppy seeds, garlic salt, fried onions, fried garlic and, if there’s any extra in the kitchen, crumbled pork rinds—for a crunchy, salty, creamy combo that’s everything but the bagel. –KV 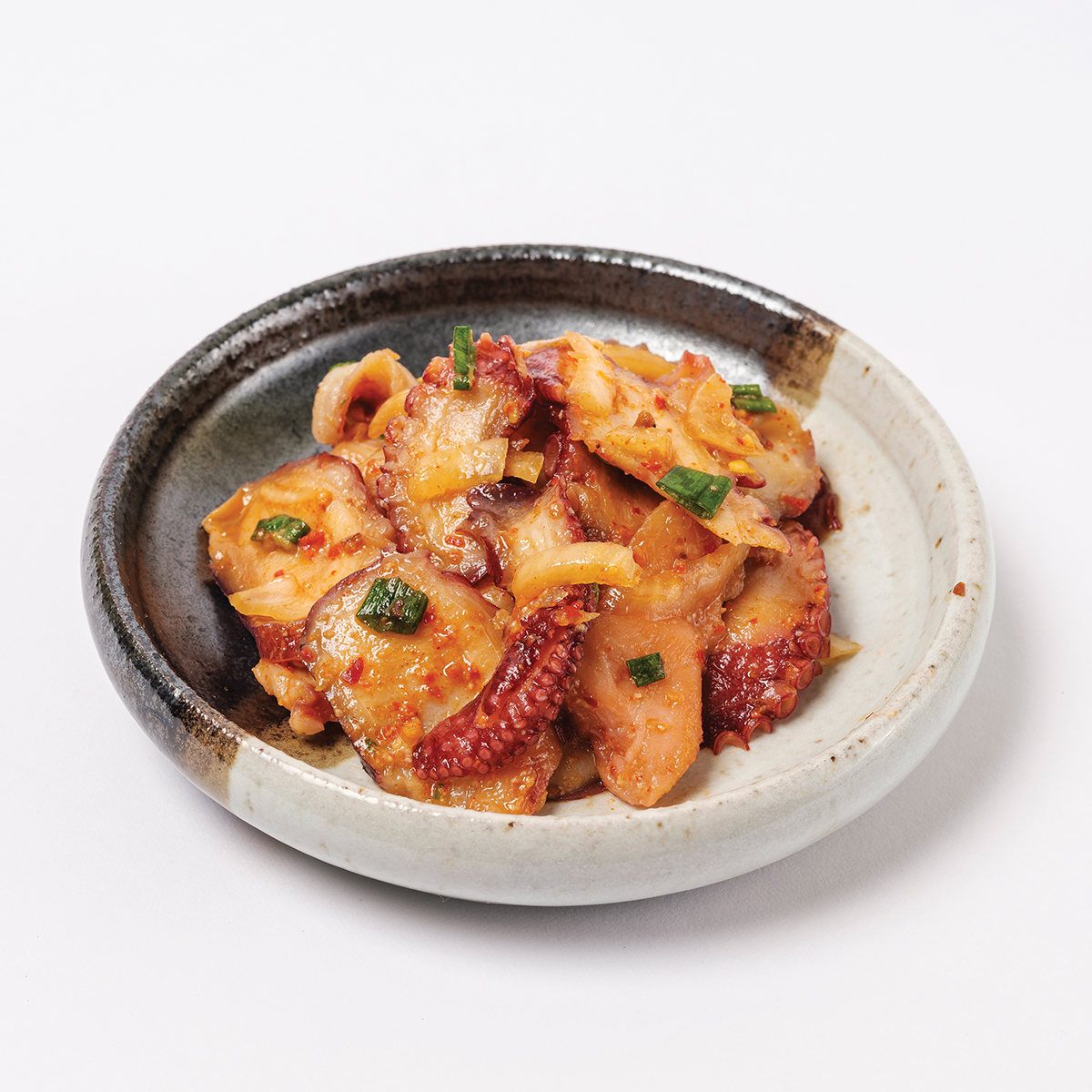 Even without many tourists, the line at ‘Ono’s snakes into the parking lot. Inside, you’ll still find Judy Sakuma, who co-founded the Kapahulu poke icon with her late husband, Willy, working in the kitchen. Sakuma’s eight poke varieties all have their fans. Most popular are No. 1 shoyu ‘ahi and No. 7 spicy ‘ahi, but it’s No. 2 shoyu tako we’re smitten with. Limu and ‘inamona hide in the background, letting the straight-up saltiness of the shoyu play off the sweet, tender tako, with gentle punches of chile pepper lingering on the finish. –MT 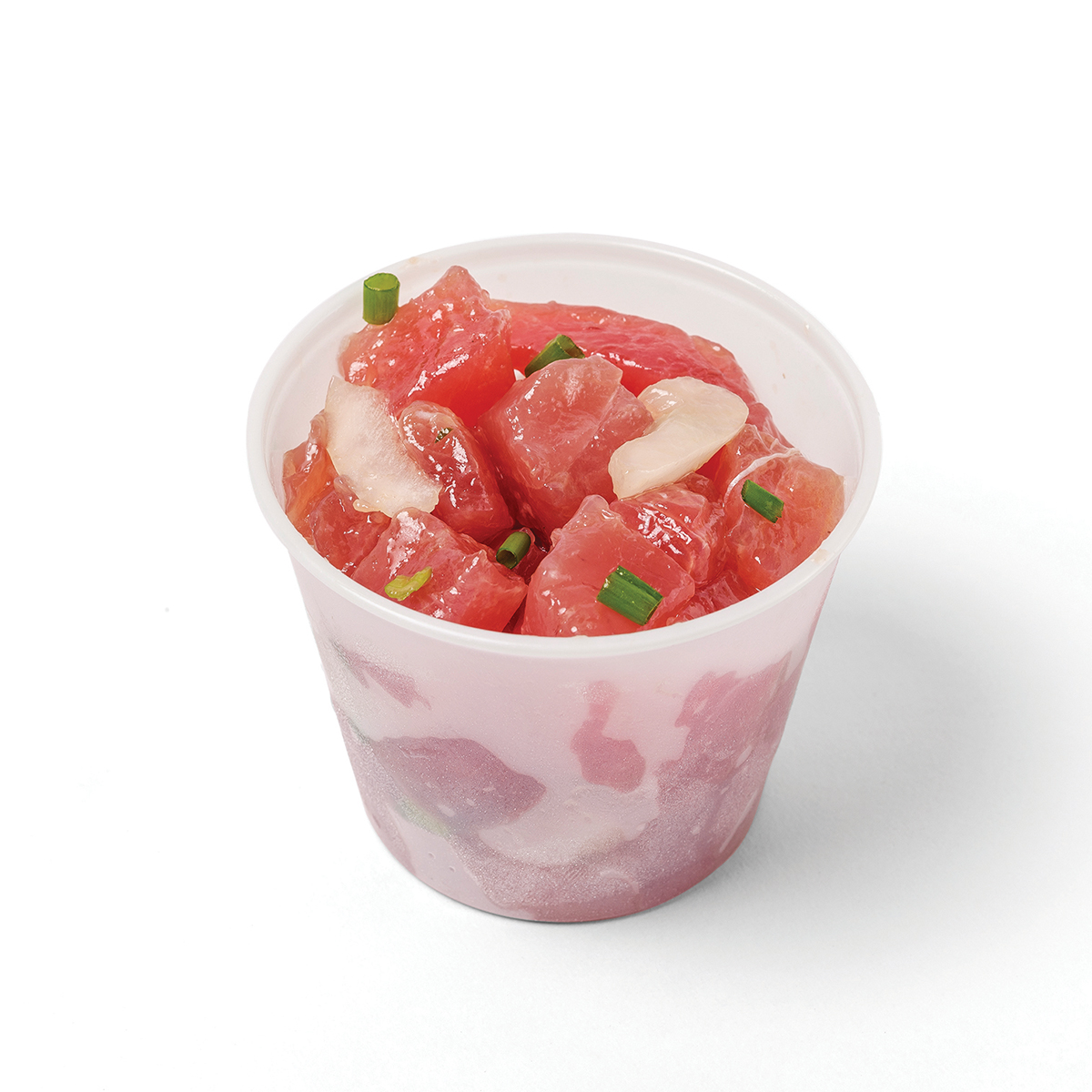 Poke  by the Pound

Fish lovers stream to the corner of Nimitz Highway and Kalihi Street all afternoon to pick up such poke favorites as spicy, shoyu onion and the minimalist Hawaiian Salt ‘ahi. Chef AJ Lani, a 2005 Sam Choy poke contest winner, nicknamed that poke “sashimi on the go.” Owner Long Tran has a fleet of fishing boats that deliver daily. Lani notes the ‘ahi steak and furikake salmon are other popular choices, describing them as “comfort food for local people.” –RD 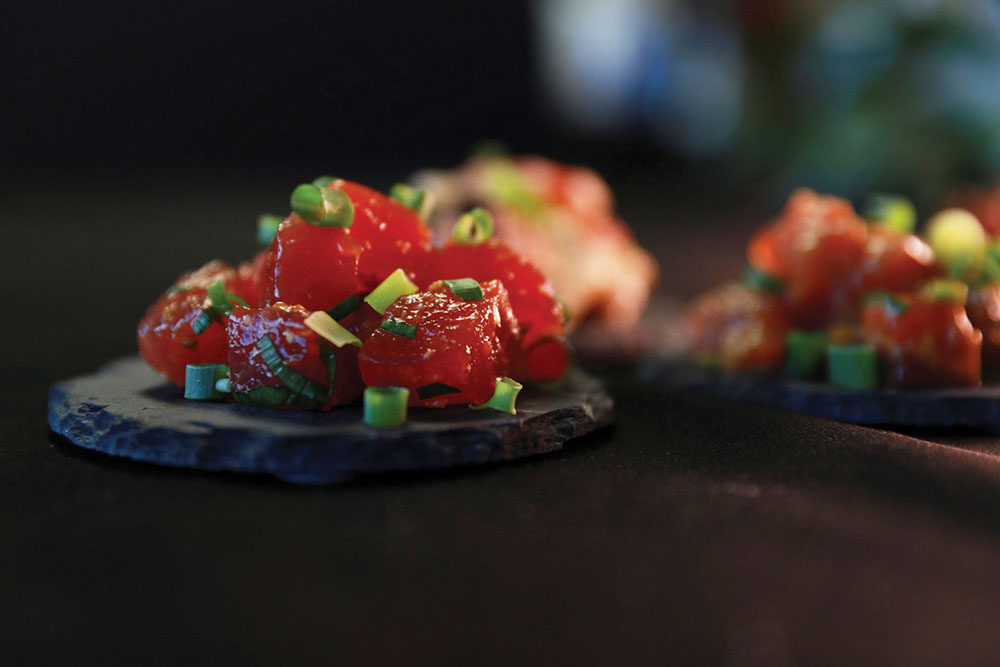 This popular takeout spot in Waipahu boasts more than 30 varieties, from the standard shoyu ‘ahi to a California roll-style poke with avocado and edamame. Its most popular, though, is the ‘alae poke, a simple mix of unrefined red salt harvested on Kaua‘i and auction-fresh ‘ahi topped with fresh green onions. Founder Mel Tanioka came up with the recipe and the shop makes several hundred pounds of it a week. –CTF

SEE ALSO: There Are Other Fish in the Sea &#8230; for Poke and Sashimi

More than 40 varieties of poke rotate through the market known for its extensive selection of alcohol. While customers favor the Tamura’s Special, Sunrise and spicy ‘ahi, the man in charge of poke, Dean Okimoto, says he likes his simple. Okimoto’s pick is the spicy Thai chile. Just three ingredients—‘ahi, green onions and cucumbers in a spicy shoyu sauce—ensure the fresh fish is the main feature in this bite that pairs well with everything from a crisp white wine to a local lager.  –CY 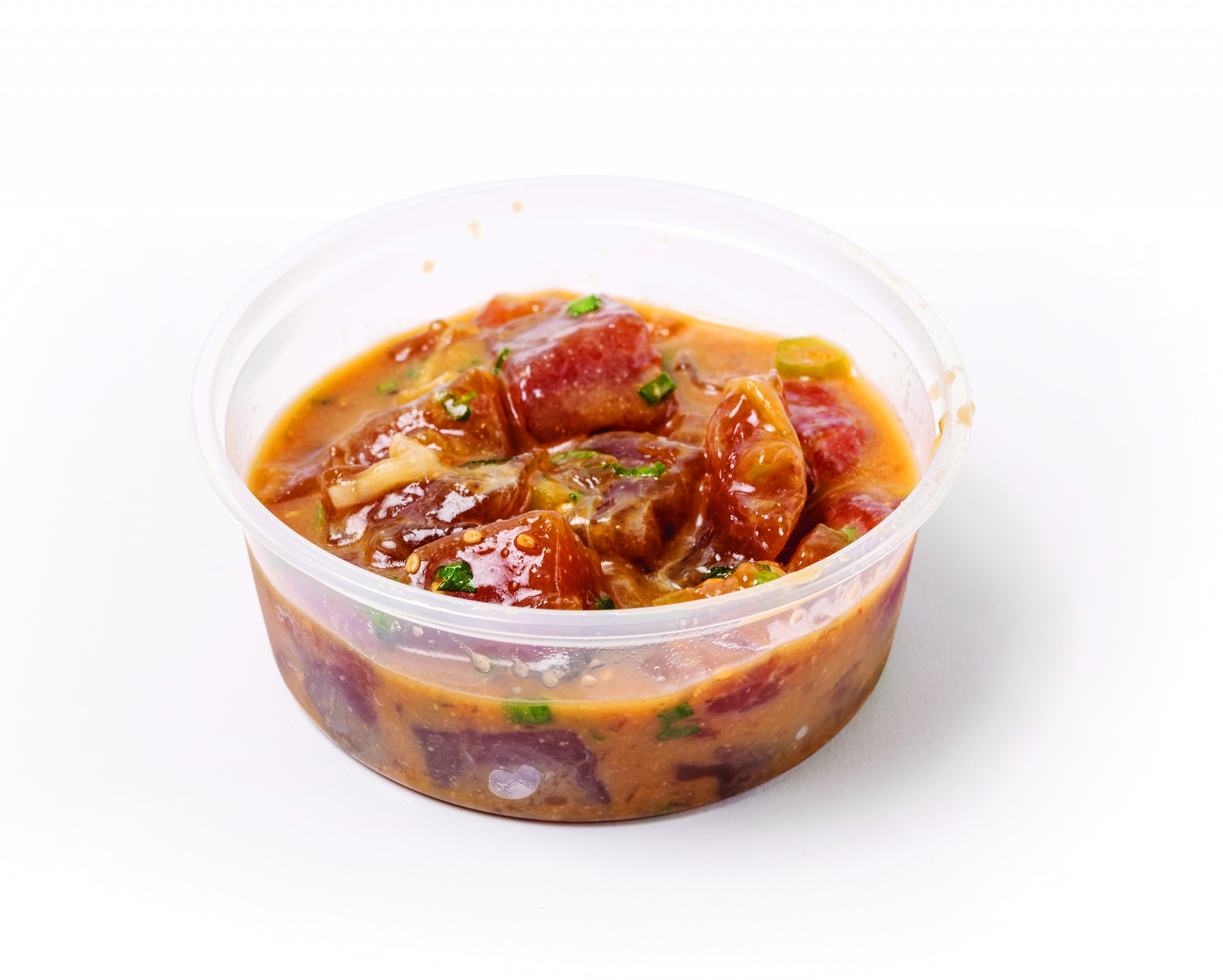 Off the Hook Poke Market

Since it opened two years ago, Off the Hook has only served eight kinds of poke, including the unique Japan Deluxe, a play on namerou, a popular minced fish and miso izakaya dish in Chiba, Japan. Sweet miso, ginger and shiso are combined with ‘ahi and broken down in the shop. “In Japan, fishermen used to use miso to preserve raw fish so it didn’t spoil,” says co-owner JP Lam. “Then they discovered it was delicious.” –CTF 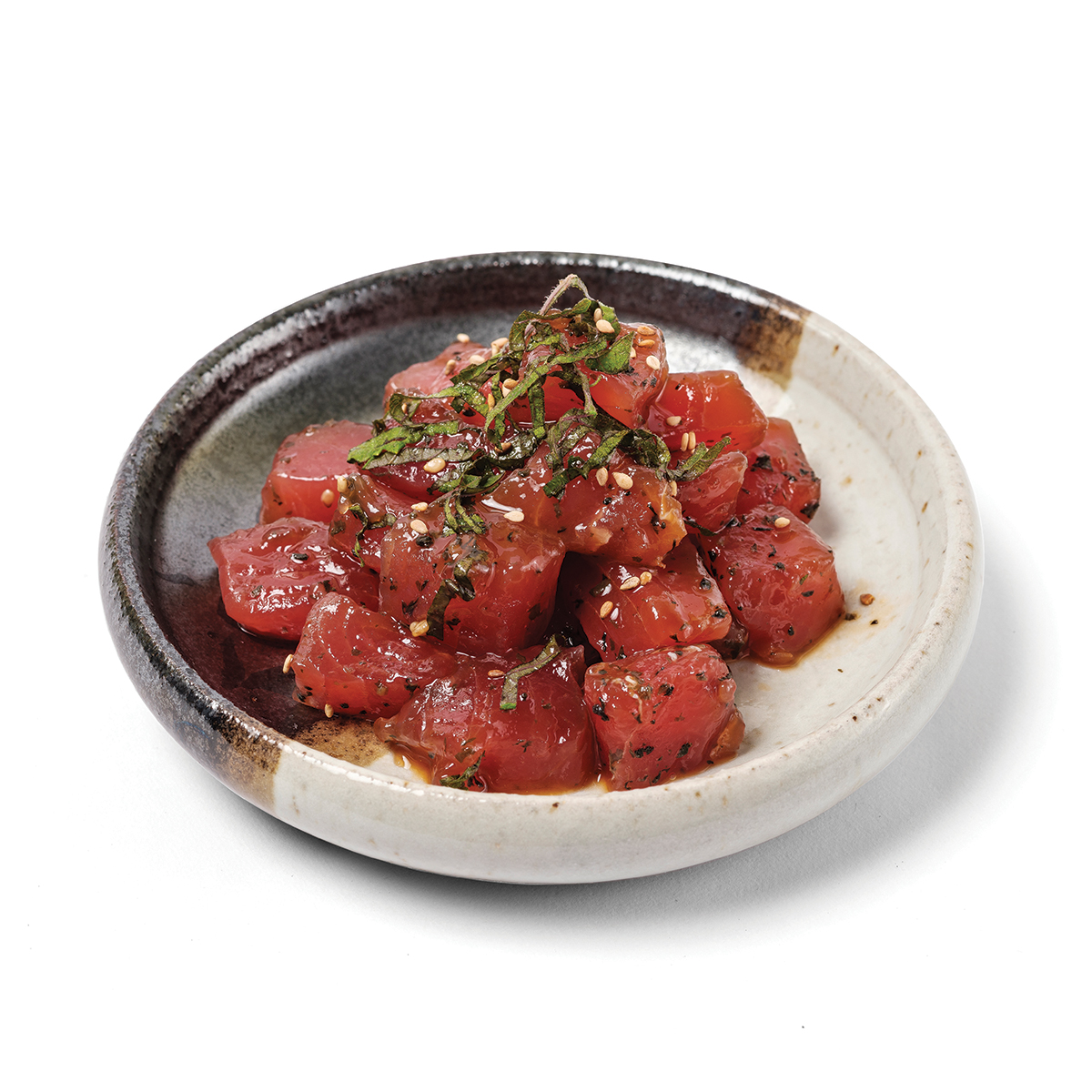 In Chinatown by day and Waikīkī by night, brothers Jun and Ryo Tsuchiya prepare fresh fish and toss poke to order in tucked-away spots. A favorite poke is ume shiso ‘ahi, flecked with ume, lending a touch of tang, and topped with julienned shiso for a unique freshness. The brothers, who hail from Japan and emulate the top-quality bounty there, offer add-ons of uni and ikura that lure many of us to walk or drive across town. –RD

SEE ALSO: What’s In Your Bowl? We Asked 3 Local Chefs for Their Secrets to a Perfect Poke Bowl

You may not think you’d find fresh ‘ahi poke in the back of a Korean restaurant. But owner Kyung Cha kept a 68-foot longline fishing boat in Kewalo Basin for 20 years. Her menu features typical Korean dishes, but it’s the fresh sashimi and made-to-order poke that shine, the Mama Special in particular, a flavor-packed mix of ‘alae salt, white and green onions, sesame oil, ogo, masago and a sinus-clearing amount of Hawaiian chile pepper with sashimi-grade ‘ahi sliced by Cha herself. –CTF

Hinano and Tiara Delgado developed a cultlike following for super-fresh fish and time-consumingly house-made sauces for their Native Hawaiian business at farmers markets. When the couple opened a store in Chinatown in 2019, the crowds followed them. Hinano died suddenly this summer, but wife Tiara reopened for customers who patiently queue up for the poke, especially the cold ginger ‘ahi, sprinkled generously with fresh green onions and grated ginger that gives the dish added bite. Other favorites are taegu and spicy. –RD 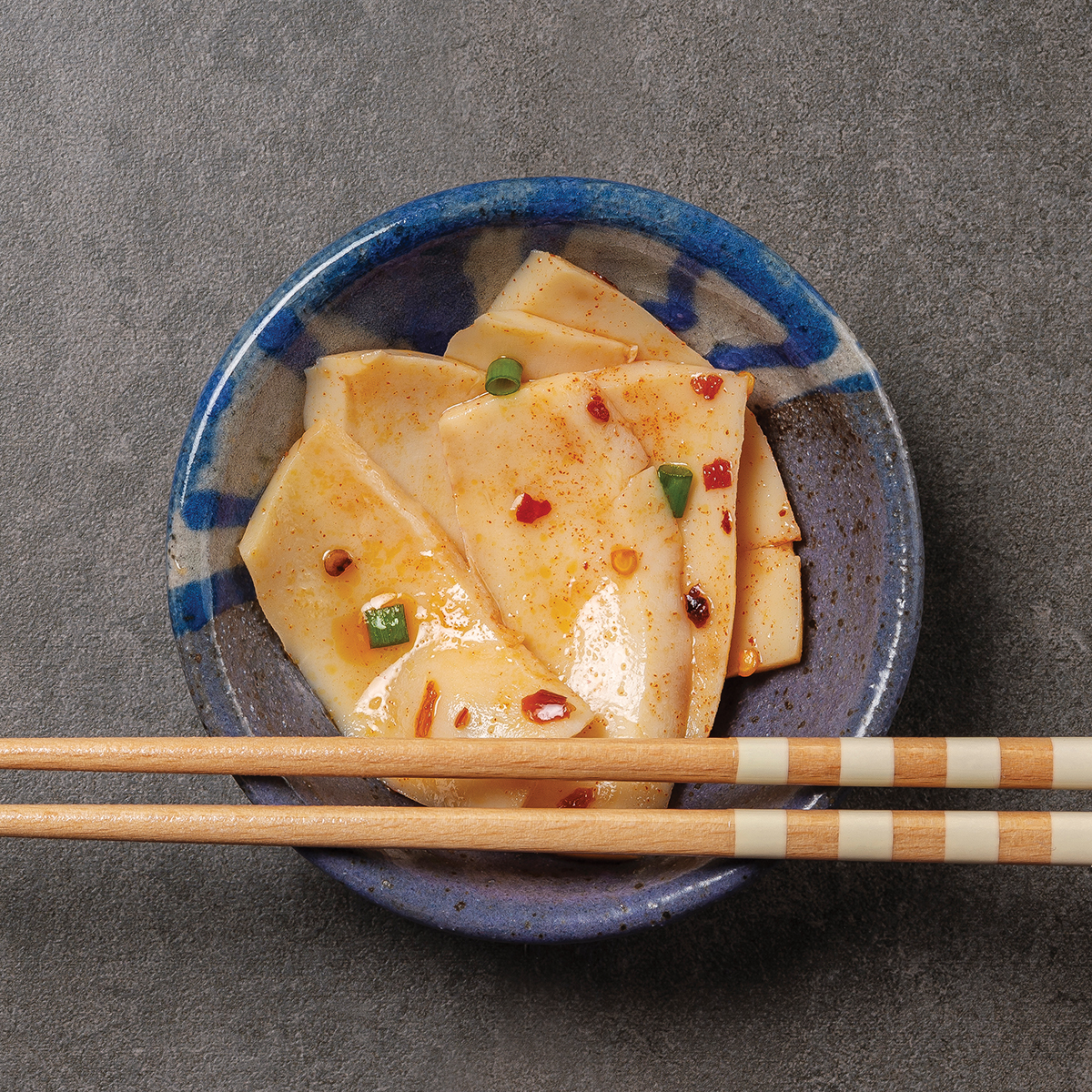 After a fire gutted the Kalihi market in 2018, Alicia’s reopened as a much smaller express takeout counter—complete with a new 20-foot poke case—a couple of doors down. While its wasabi masago poke has long been a customer favorite, general manager Chris Kam prefers the abalone squid poke, which features imitation abalone made from squid in Japan. “I like the chew,” says Kam, grandson of founder Alicia Kam. “Nobody really knows about it, but the ones who do, they come every day and buy it.” –CTF 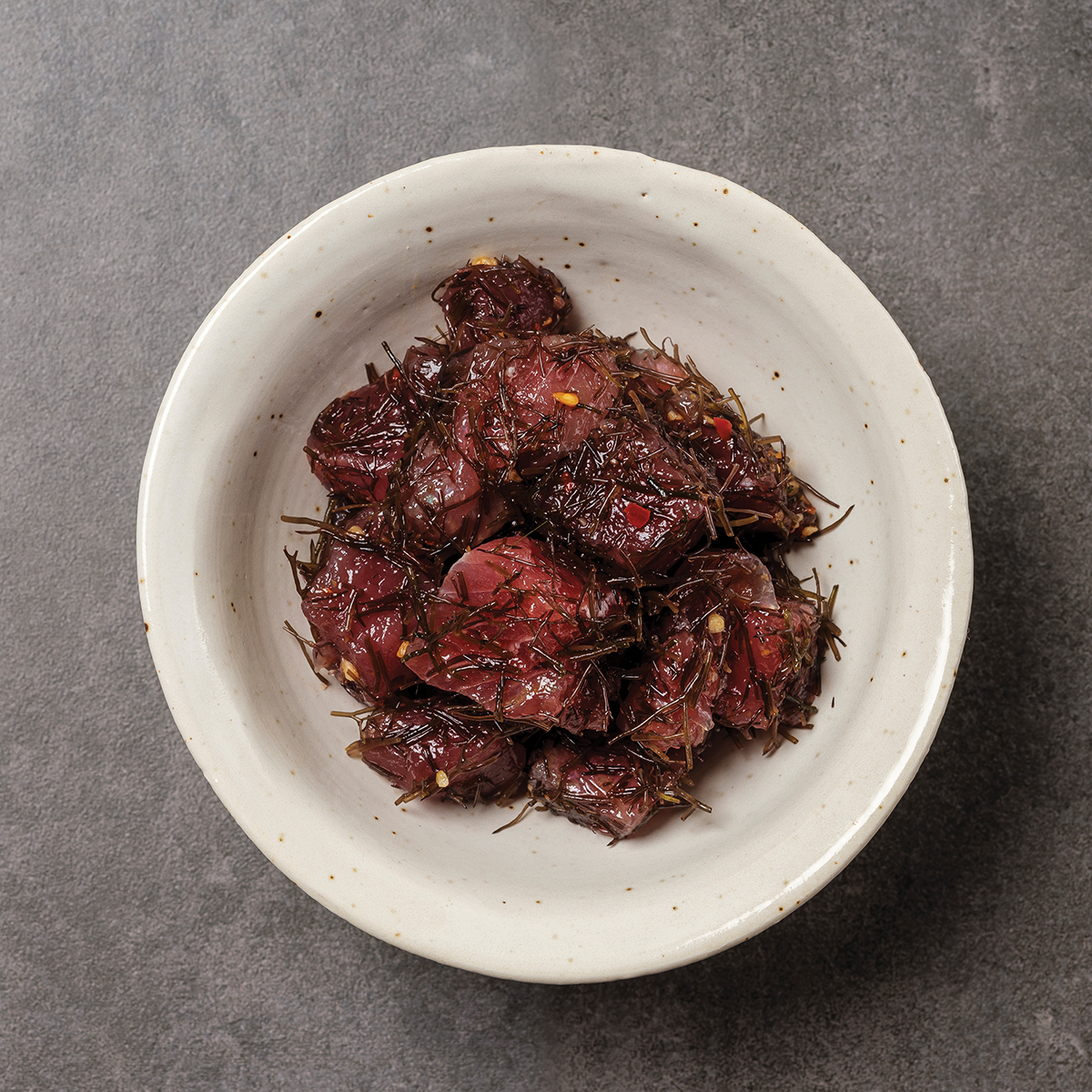 Owner Guy Tamashiro peers down the long glass counter with 20-plus varieties of poke and smiles. Asked to name a favorite, he goes back and forth, telling me his wife’s favorite—spicy made with tobiko, not masago—before coming back to his pick: aku limu, seasonally available and preferred by a lot of local folks. The pink market with the big crab offers decades of old-school experience—on King Street since 1947—while always developing new flavors. “That’s the fun part of the job, right?” he says. –RD