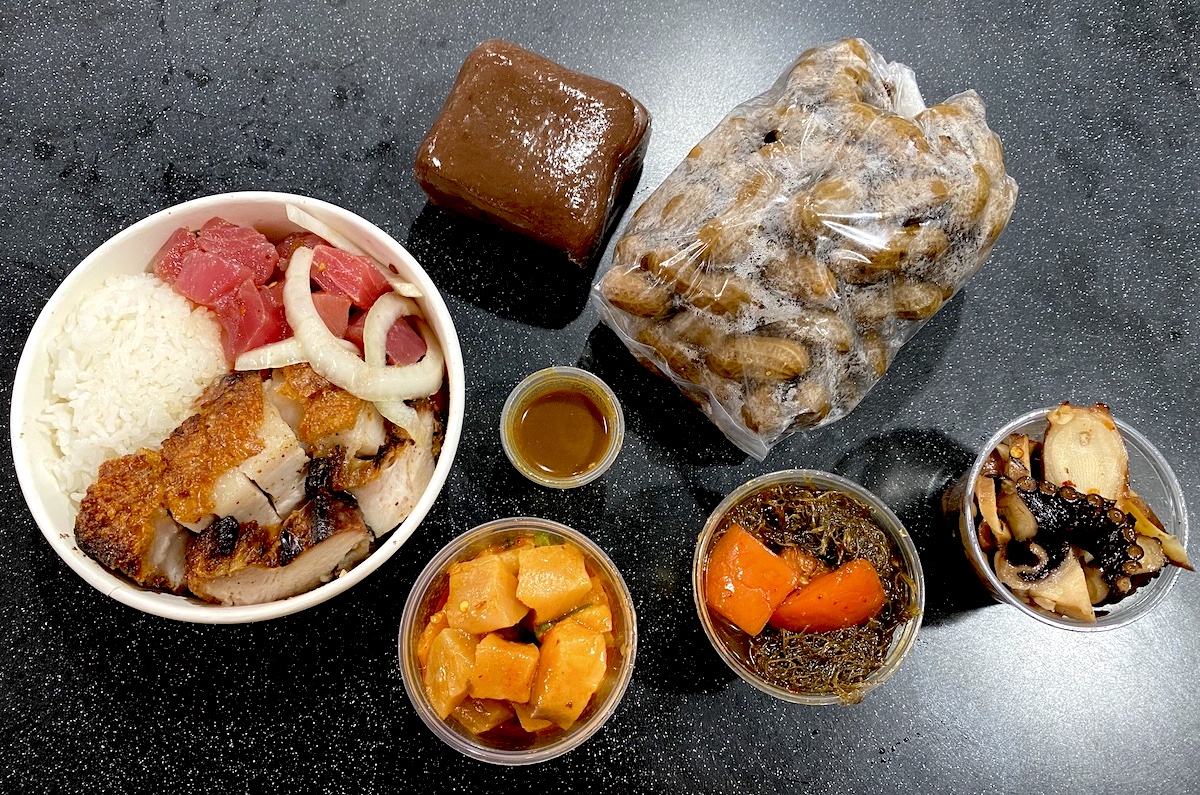 On the Monday after Thanksgiving, old-school local favorite Alicia’s Market quietly reopened at its original location for the first time in more than four years. It’s a big first step back: The iconic poke shop had to close its huge counter and grocery section and move into a tiny neighboring space after a fire destroyed its kitchen. Now it’s serving a growing selection of meat, seafood specialties and favorite snacks from a takeout counter near the original front door. 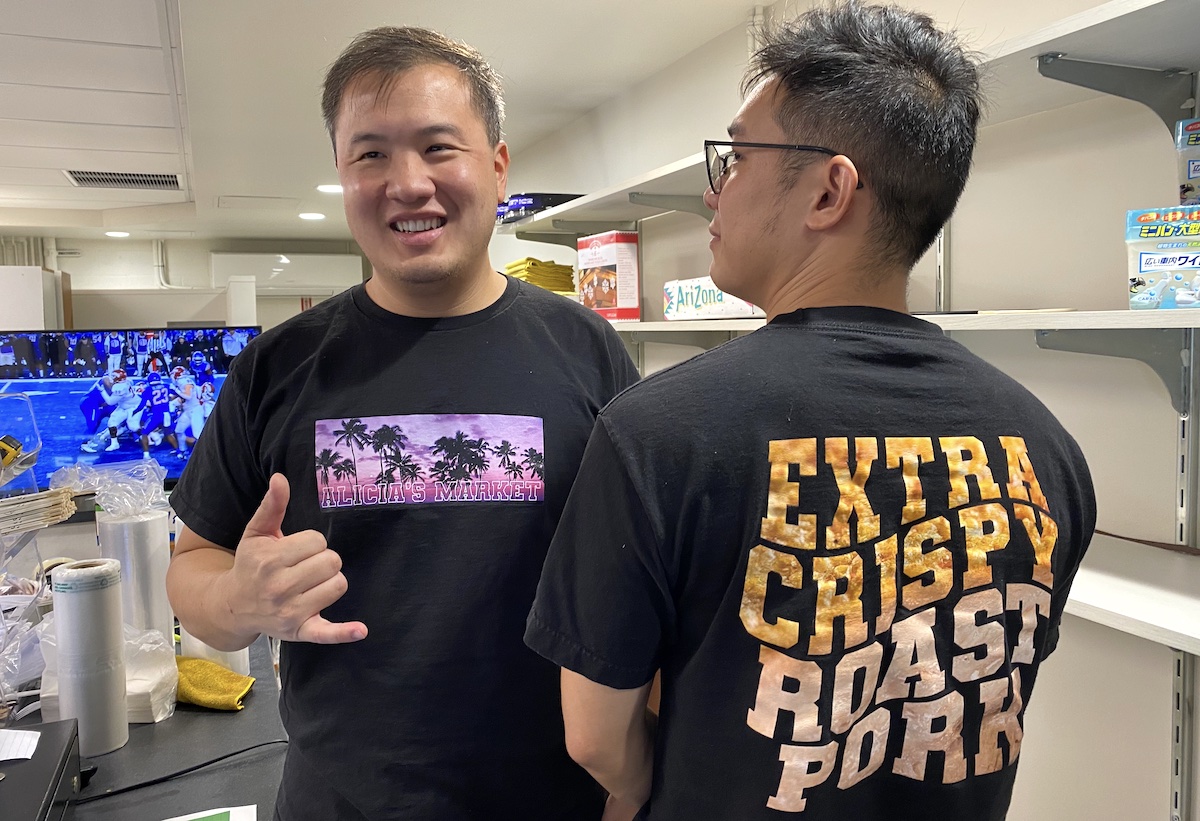 Chris and Brad Kam are the third generation working at the store. Photo: Mari Taketa

Inside, brothers Chris and Brad Kam cheerfully fill poke containers, plates and bags, lining up walk-in and phone orders for a steady stream of customers. Some things look very familiar: roast pork, smoked tako, wasabi masago ahi poke bowls. Hawaiian plates are back, along with dried aku, pastele, boiled peanuts and, as of this past Saturday, fresh kulolo. 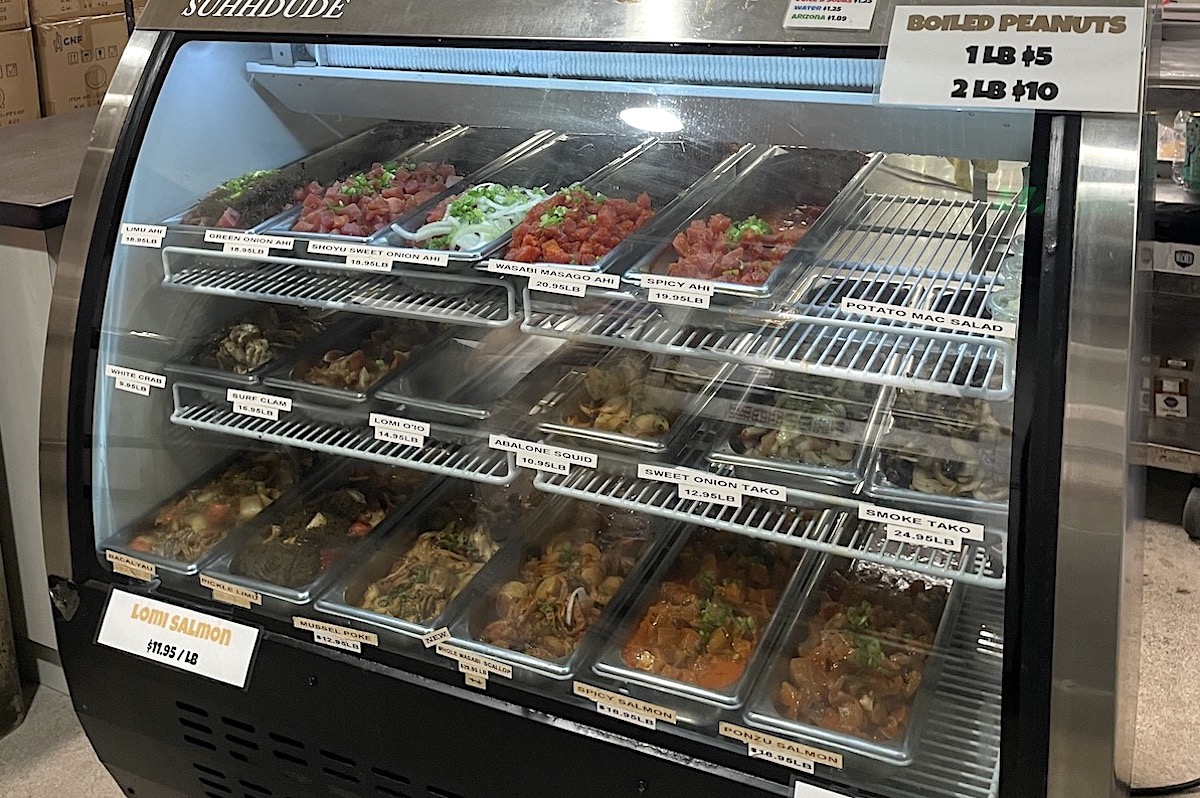 About 18 kinds of poke now fill the glass case, from ‘ahi favorites to the less common lomi o‘io, ponzu salmon, bacalhau and pickled limu—more than what was offered at the now-closed temporary location. Chris Kam is asking his mom when she can start making the customer favorite fried rice and fried noodles again. “Slowly but surely, one by one, we’re bringing it back,” he says. 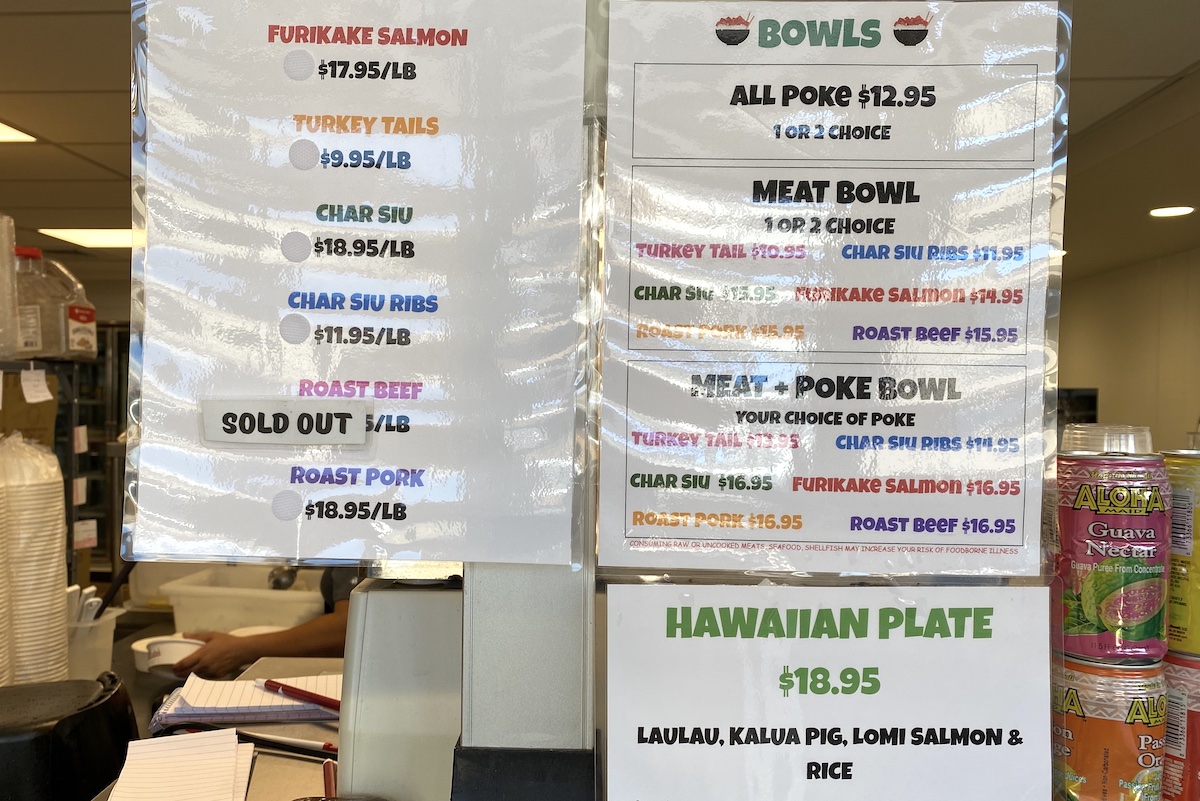 He’s looking to bring back crack seed, almond cookies and other Chinese treats while figuring out his supply chain and finding a new crack seed maker after his last one retired. “I’ve got the jars and everything,” he adds. 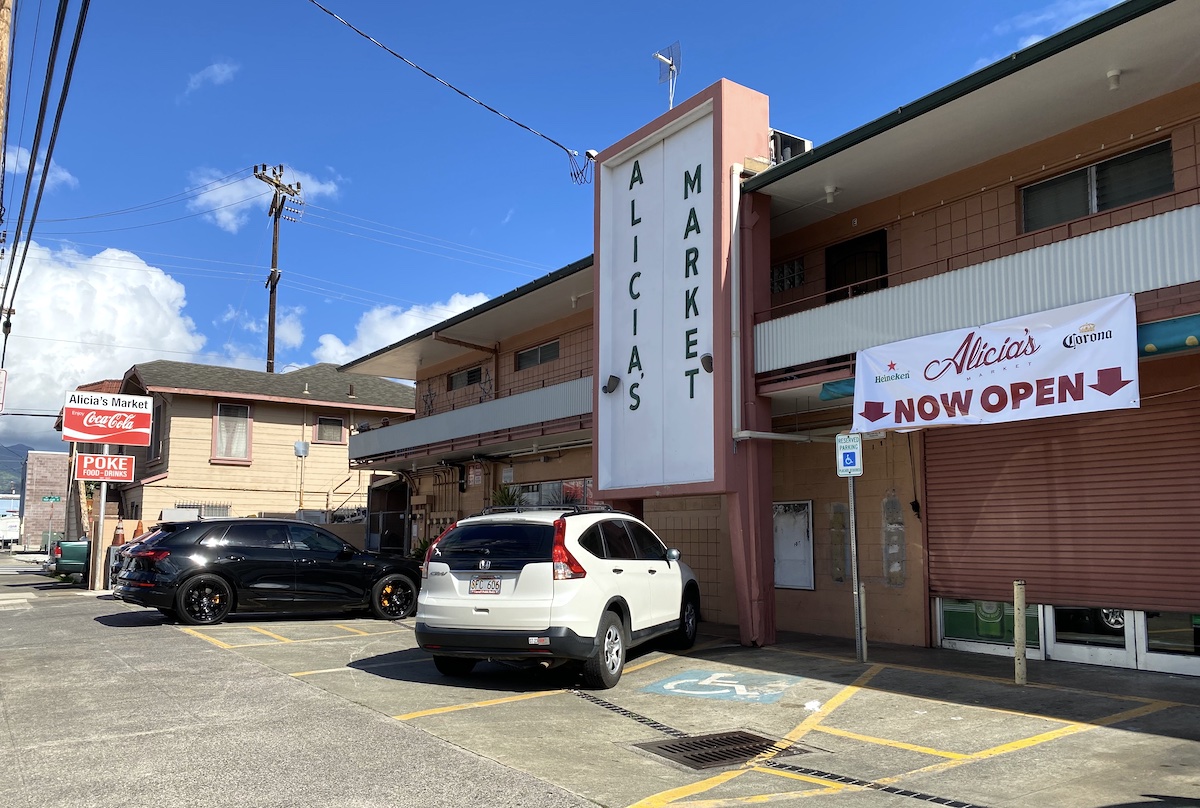 Alicia’s goes back more than seven decades to a small wooden store started by Alicia and Raymond Kam in 1949. Their legacy just kept going as their son Leonard took over (that’s him still working in the back), with their grandsons working behind the counter. Before the June 2018 blaze, the market drew a near cult-like following with its array of Chinese meats smoked on site, a long glass counter full of poke, plus Hawaiian food, salads, snacks, sweets and the drinks, liquor and groceries you’d expect at a corner store. The original space was rebuilt and ready to move back into a year ago, Kam says. The reason Alicia’s is not yet back to its glory days with arrays of food covering counter after counter, roast ducks and chickens hanging to the left and 30-plus varieties of seafood for sale is a lack of workers. 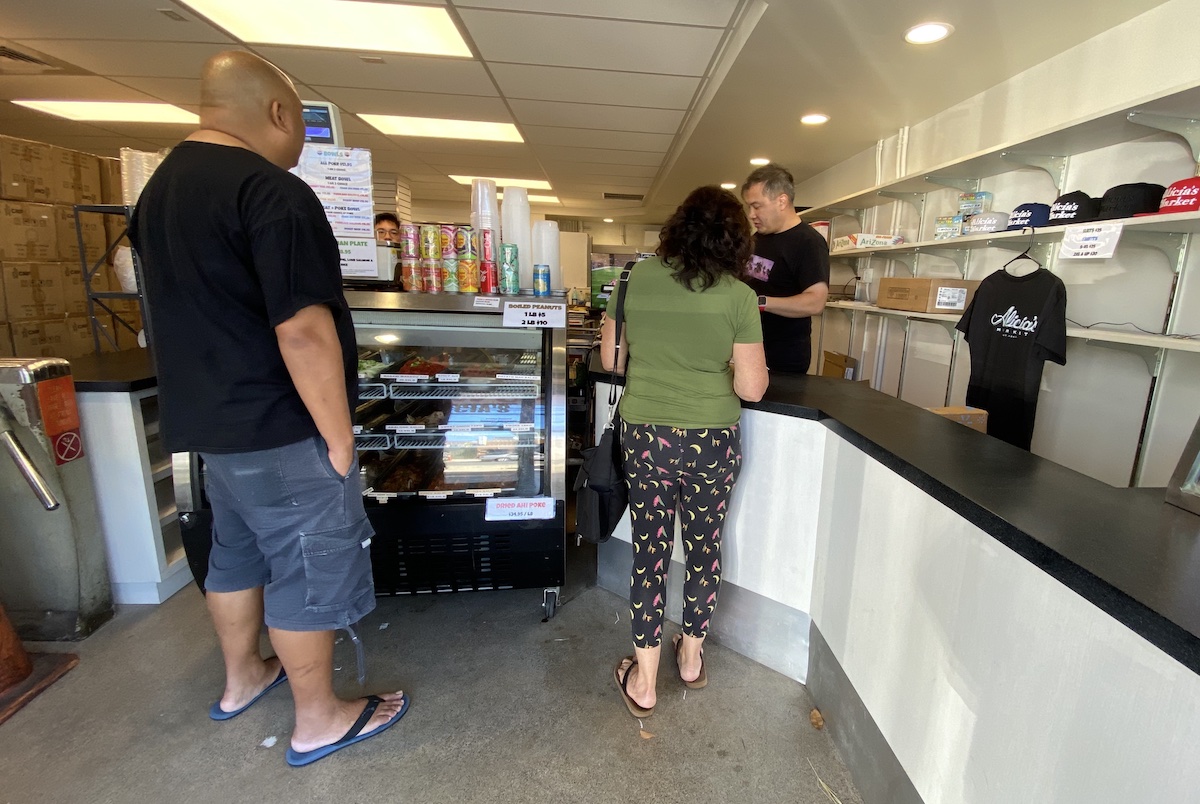 News that Alicia’s Market is back in its original spot appeared on its Instagram last week, with a short video of the metal roll-up door rising to reveal a little family member bursting out with a big grin; it was greeted with nearly 100 comments from excited fans. By the time we arrive Saturday, they’re sold out of roast beef but still have char siu, char siu ribs, roast pork, turkey tails and furikake salmon. 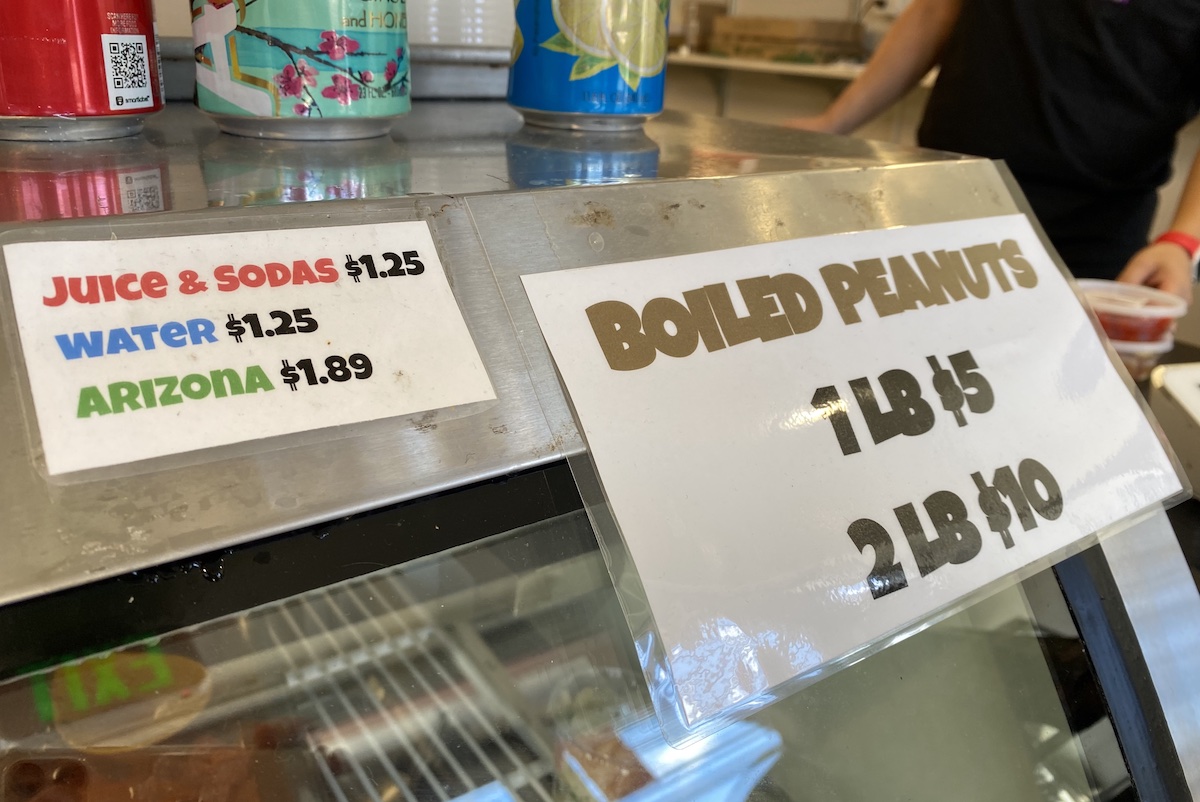 For now, cardboard boxes full of takeout containers are stacked near the door. Kam says the market will stick with shorter midday hours—10 a.m. to 2 p.m. Monday to Saturday, closed on Sundays—as they figure out next steps. But there’s room to hope that mochi, lumpia, banana walnut bread, roast chicken and marinated meats might be making a comeback in the new year.