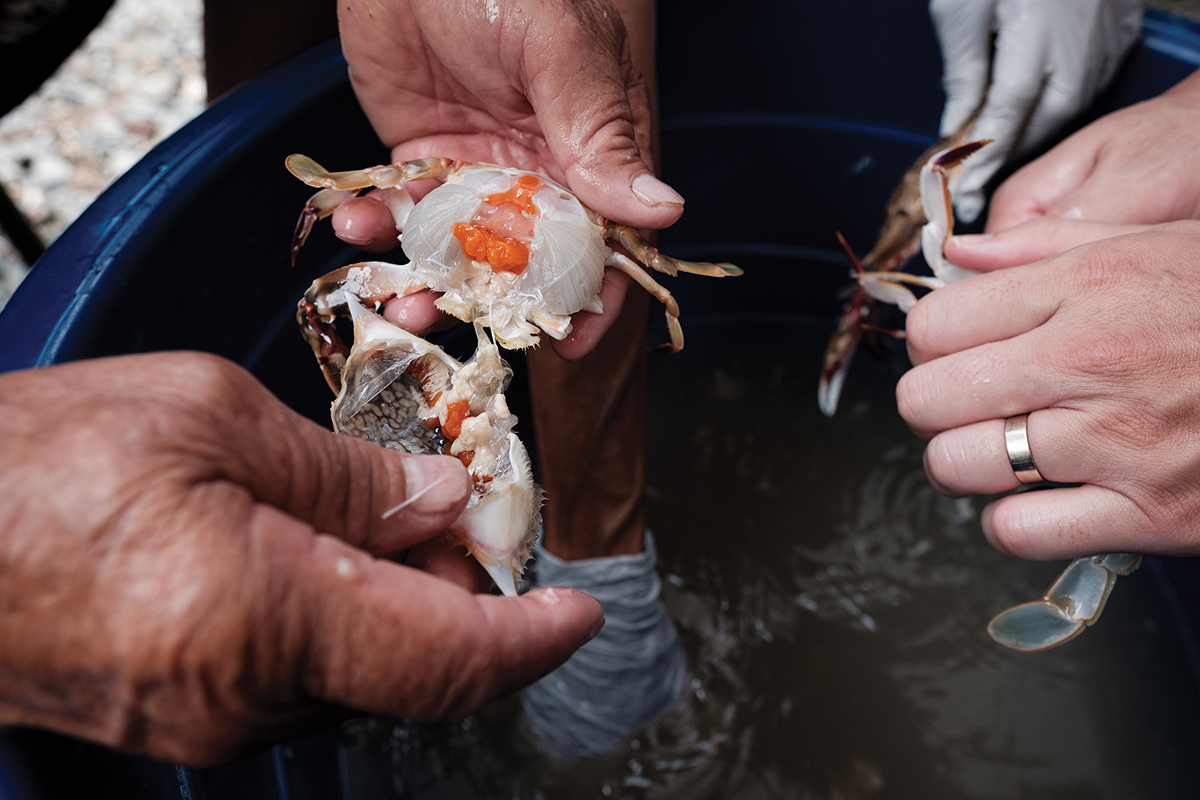 “We say it all the time: Our ‘ono has changed,” says Hi‘ilei Kawelo. “My ‘ono has changed from my dad’s ‘ono; even the kids we work with now, it’s changed. We try to reintroduce some of that ‘ono to their palate, because that’s our culture.”

That includes traditional raw preparations of i‘a, a word that encompasses anything that comes from the ocean, including fish, he‘e, wana (sea urchin), ‘opihi and crab, says Kawelo, who comes from a family of fishers and divers and is the executive director of Paepae o He‘eia, a nonprofit dedicated to caring for an ancient Hawaiian fishpond. I‘a simply salted with perhaps a bit of limu and/or ‘inamona sounds naked compared to popular shoyu/sesame oil/mayo-sauced concoctions. But with strong-tasting reef fish like manini and kala, wana that makes uni taste like insipid cream, and iodine-flavored wild limu kohu and līpoa, the original Hawaiian dishes are likely even more potent than today’s wasabi poke.

SEE ALSO: Can the Mainland Do Poke Right? Do We Want Them To?

And while it takes most of us a few minutes to order poke at the supermarket, the mainstays at a Kawelo family lū‘au—including poke aku or ‘ahi, lomi awa‘aua or ‘ō‘io, raw kuahonu (white crab), ‘opihi, and raw lobster and wana—take days to catch and prepare. The ‘inamona alone takes a day to roast, shell and crush—Kawelo has at times roasted the kukui nuts on a piece of old galvanized roof over an open fire (though these days she just uses an oven). The ‘ō‘io is iced for three days until the flesh is soft enough to scrape from the bones to mix with salt, water, limu kohu and ‘inamona, as well as minced round onion, green onion and chile pepper (vegetables introduced by later settlers to the Islands). Raw he‘e is sliced thin and mixed with its ‘ala‘ala (liver) for a formidable punch of flavor, plus salt, ‘inamona, a little bit of Hawaiian chile pepper and huluhuluwaena, a slippery, thin and flat limu. 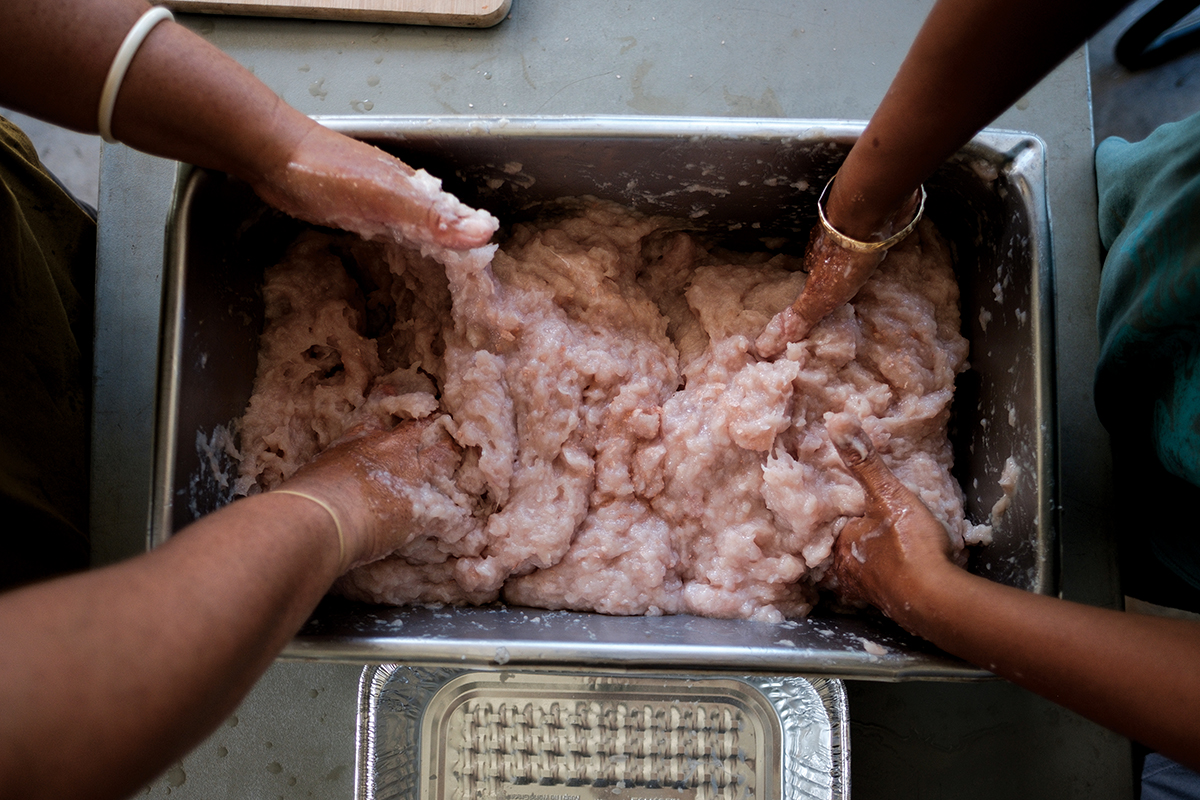 The lobster wana is the most time-consuming—I think I hear longing in Kawelo’s voice as she describes its preparation. Or maybe that’s just my own. It begins with diving for spiny lobster in Kāne‘ohe Bay, near where Kawelo grew up. They slice the tail meat “small poke style, real thin. Then we go gather wana out at the breakers. We dive for long spine urchin—get it out of the hole and to the surface. On shore, we get a basket, got handles on either side, and people shake the basket back and forth, rolling the wana to get the spines off. Basically, we make a mess, standing in wana spines. Once all that’s done, we sit in the water on our beach chairs or stool and crack the wana open to get to the meat, which is really the gonads. We have a collecting bin—mayonnaise jar or something—for the wana juice, a purple liquid that stains your hands for a week after, that we also used to mix with the lobster and wana to make the gravy. It’s all about the gravy, the kai.” The result is so rich and strong that Kawelo can only eat about a tablespoon at a time. Her dad could eat it by the bowlful over rice or poi. “They just don’t make people like that anymore,” she says.

SEE ALSO: Editor’s Page: At Its Core, Poke is a Humble Dish

And the Kawelos don’t make lobster wana like that anymore, either—not for almost two decades. “The lobster stocks are gone,” she says. “It takes a really long time for them to recover. That’s why you need to take care of your resources, because that particular dish doesn’t exist if that resource is gone.”

Kealoha Domingo, a cultural practitioner and chef, grew up in Ka‘a‘awa Valley on nenue, kala and limu wāwae‘iole, which has a spongy crunch akin to tripe. He remembers a family friend who guided him in the making of nenue and wana poke. Nenue, a pungent fish Domingo likens to natto—“you either love it or hate it”—combined with the bold-tasting wāwae‘iole and the richness of the wana “was a match made in heaven. I could eat that for days. Some people won’t come near it.”

In his family, ‘inamona is dark-roasted and ground until pasty so it’s almost like Nutella. He grew up eating poke made with reef fish, even oama, his grandmother patiently filleting the tiny fish that these days is mostly used as bait. “E ‘ai ka mea loa‘a—eat what we got,” Domingo says. “That’s the lesson we need to teach our children to be truly resilient. My ancestors were the masters of it—they even survived pandemics.”

SEE ALSO: Poke: Past and Present

This story originally appeared as “Old-School ‘Ono” in the October 2020 issue of HONOLULU Magazine. Get your copy at shop.honolulumagazine.com and subscribe to the print and digital editions now.

See Inside the New Waikīkī Market and Piko Kitchen