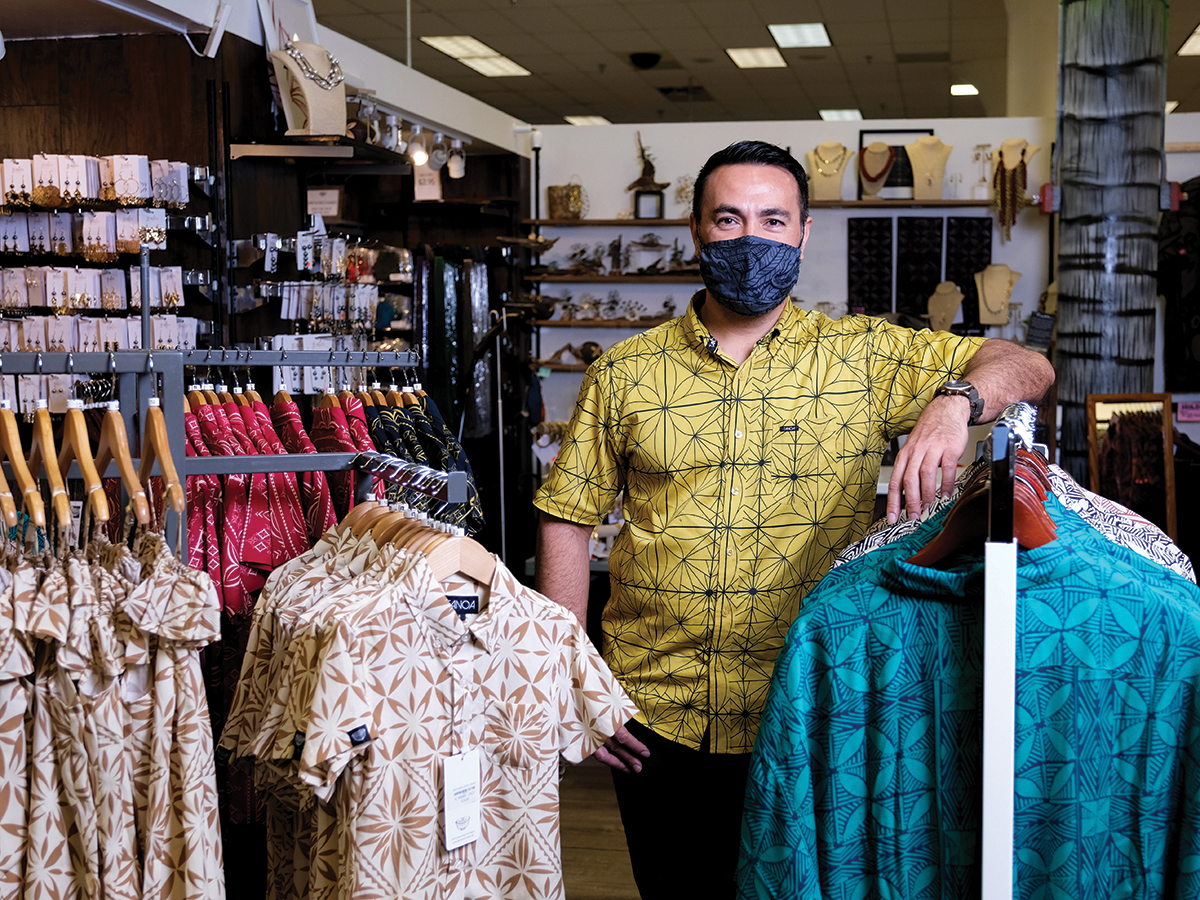 Specializing in men’s, women’s and children’s apparel that feature Polynesian- and Samoan-inspired designs, clothing store and fashion brand Tanoa Hawai‘i has operated out of ‘Ohana Hale since the marketplace opened in 2018. When pandemic-related restrictions led to closures at ‘Ohana Hale throughout 2020, Tanoa owners Aaron and Cindy Forsgren were surprised and a little puzzled. “My thought was: If it’s safe for people to go to Costco or Walmart, where there are thousands of people shopping, how can it not be safe to visit a small business like ours, with five people in the store?” asks Aaron Forsgren. “We’re not asking for a handout from the government. We just want the opportunity to stand on our own feet.”

Earlier that year, the Forsgrens had already invested a large amount of money in a new clothing collection for the 2020 Merrie Monarch Festival; this was going to be Tanoa Hawai‘i’s debut at the prestigious Hilo festival and the Forsgrens were excited. When Merrie Monarch was canceled due to COVID-19, it didn’t leave the Forsgrens much money to prepare for either Mother’s Day or Christmas, the company’s two biggest seasons. But despite what Tanoa’s owners describe as a “pretty brutal” situation, Aaron Forsgren was surprised at what happened when the marketplace was allowed to reopen: “I thought sales would be dramatically lower, but it was almost normal,” he says. “The people came right back again, and we’re very grateful for that local support.”

Hawai‘i has been supportive of Tanoa, though the brand is relatively new to the state. For 16 years, Aaron Forsgren (who is Samoan and Swedish) and Cindy Forsgren (who is Hawaiian) lived in American Samoa. There, they created Tanoa—named for the ceremonial bowl used in Polynesian gatherings to share restorative ‘awa with new guests and old friends—in response to a lack of affordable, well-designed garments made specifically for larger people. “Our people are not small people. They can go up to 7X and a lot of vendors we’d see at trade shows would only have clothing that stopped at 2X. We saw a way to cater to the needs of the local people,” says Aaron Forsgren.

The couple moved to Honolulu in 2018 and a friend told them about ‘Ohana Hale Marketplace. The Forsgrens considered it a win-win that offered Tanoa the visibility of being in a shopping center without requiring a long lease or needing to build out the space from scratch. “‘Ohana Hale has been really good to us. And we were very pleased that it wasn’t just Samoans who enjoyed our designs, but also locals and even Japanese tourists,” Aaron Forsgren says.

When O‘ahu more or less shut down in 2020, it was the local people—both customers and fellow marketplace vendors—who kept the Forsgrens in good spirits. “We also have a store at Pearlridge and, at the end of the day over there, you just go home because you don’t know anybody,” Aaron Forsgren says. “But at ‘Ohana Hale, you’re friends with the other vendors, you hear the stories, and you know you’re in this together. It makes it a little easier to keep fighting and moving forward.”