Going Vegan Is Hard: Conclusions from 42 Meatless Days in Honolulu

At the end of his doctor-ordered vegan experiment, our carnivore concludes he’s a failure. But is he?

A strange thing happened at the end of my 42-day vegan trial. I celebrated with an egg salad sandwich ($4.99) from Mitsuwa Marketplace—one of those fluffy, Japanese-style sandwiches with bright, jam-like yolks and egg whites roughly mashed with mayo and lightly pressed between slices of pillowy white bread. It tasted like a synthetic version of Tucker & Bevvy’s mashed chickpea sandwich, which is a vegan knockoff of the traditional egg salad sandwich. The hard egg whites at Mitsuwa didn’t taste like anything from nature, to me. It was as if I was chewing soft bits of plastic. I liked the knockoff better.

This is how the trial ended—with mixed results and mixed feelings. I’m sad to report I failed to achieve a spotless record. Over the course of 126 meals, I caved 15 times. On one end of this spectrum of failure was a can of lifesaving Kirkland salmon from Costco. On the other, a decadent pastrami-spiced flank steak from Hau Tree. With each meal, a chorus of dissent bellowed from the vegan ether. Fifteen times. I’m a failure. 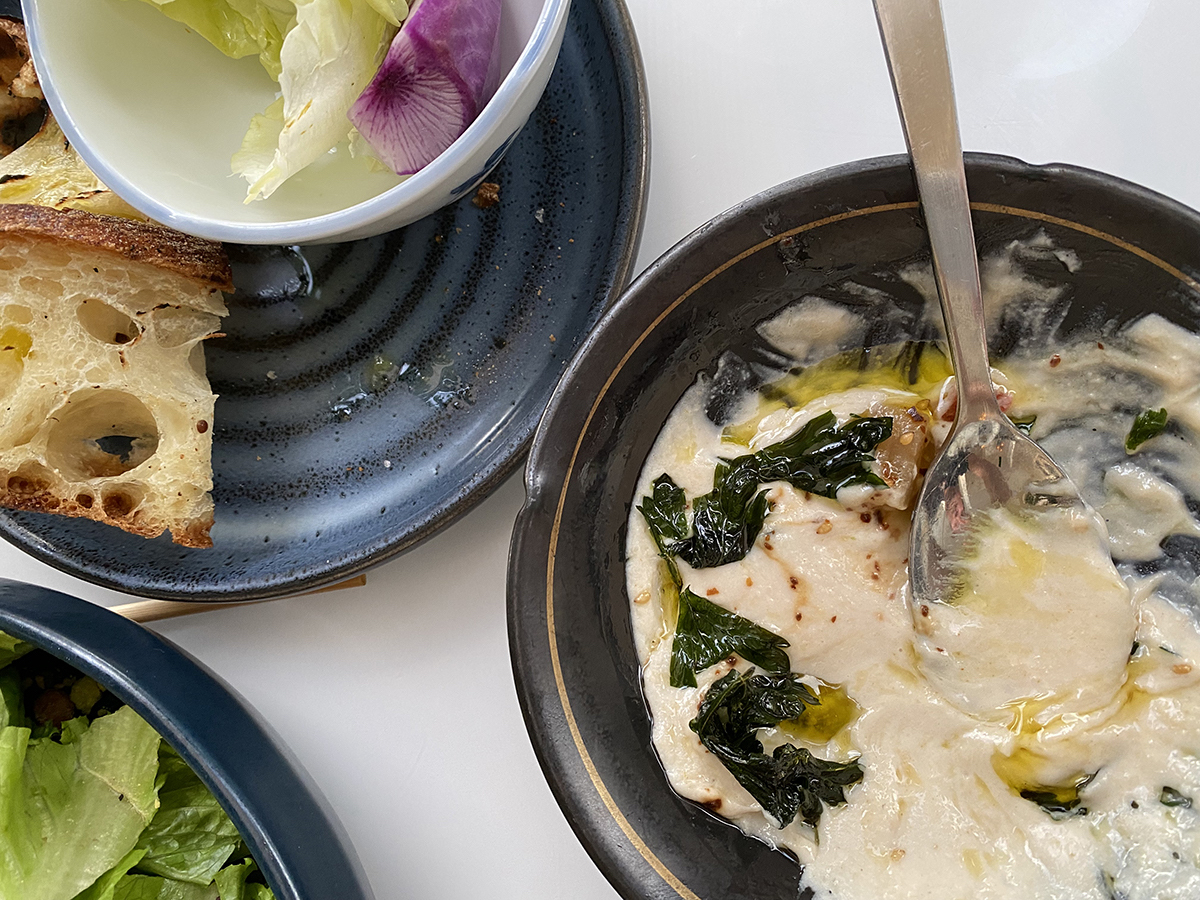 Down to Earth’s grocery aisles I swear are illuminated not by fluorescent lights, but by omniscient vegan health halos. There you can find an array of vegan snacks like s’mores cookies, LesserEvil cheese puffs, or Vegan Rob’s cauliflower and sorghum crisps that taste like an otherwordly angel’s offering: “Eat, child. Don’t you like Pringles?” When I walk in, these halos darken, as if to say, “Hold on everyone, there’s an imposter in the store.”

“Excuse me,” I ask a worker. “Do you have any vegan pie crusts?”

“This one might be,” he says, disappearing into a nimbus of freezer fog as he reaches in for a Wholly Wholesome organic whole wheat pie shell. “Yup, the label says there are no animal products. Oh wait, it does say that it was made in a facility that uses animal products. Are you fine with that?”

After a long pause, I answer, “Yeah, why not?” As I swipe my card through the check stand reader a visual image of this facility flashes in my head, each conveyor belt a Möbius strip with pie crusts on one side and cows on the other.

SEE ALSO: Going Vegan Is Hard. Here’s What It Took to Survive Week 3 in Honolulu 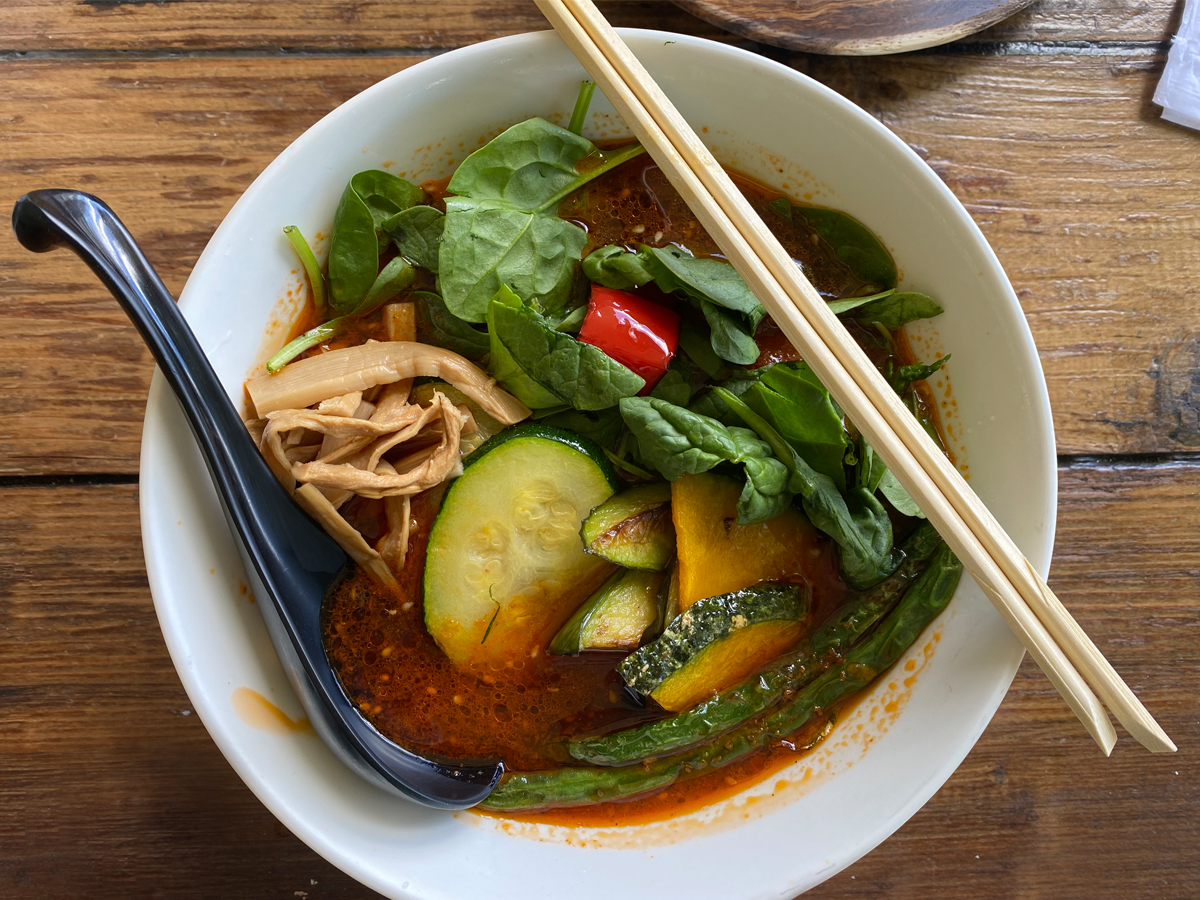 On Monday I had a great bowl of vegan tomato veggie ramen at Junpuu on King Street. It was so flavorful that I was surprised by the simplicity and generosity of it. Sundried tomatoes and roasted onions are ground into a paste with oil and mixed with a vegetable broth. The ramen is chewy and comforting. The bowl is layered with charred kabocha, bamboo, zucchini, green beans, spinach, red peppers and eggplant. What a perfectly balanced dish.

On Tuesday, Rachel, my wife, cooked a cauliflower and carrot curry soup, puréed to silky perfection, with some olive bread and oat milk butter.

On Thursday it was a quick and dirty tofu avocado sandwich from Ba-Le (ask to hold the mayo and butter) with pickled carrots, daikon and cilantro. It was bright, fatty from generous portions of avocado, and satisfyingly carb-heavy. 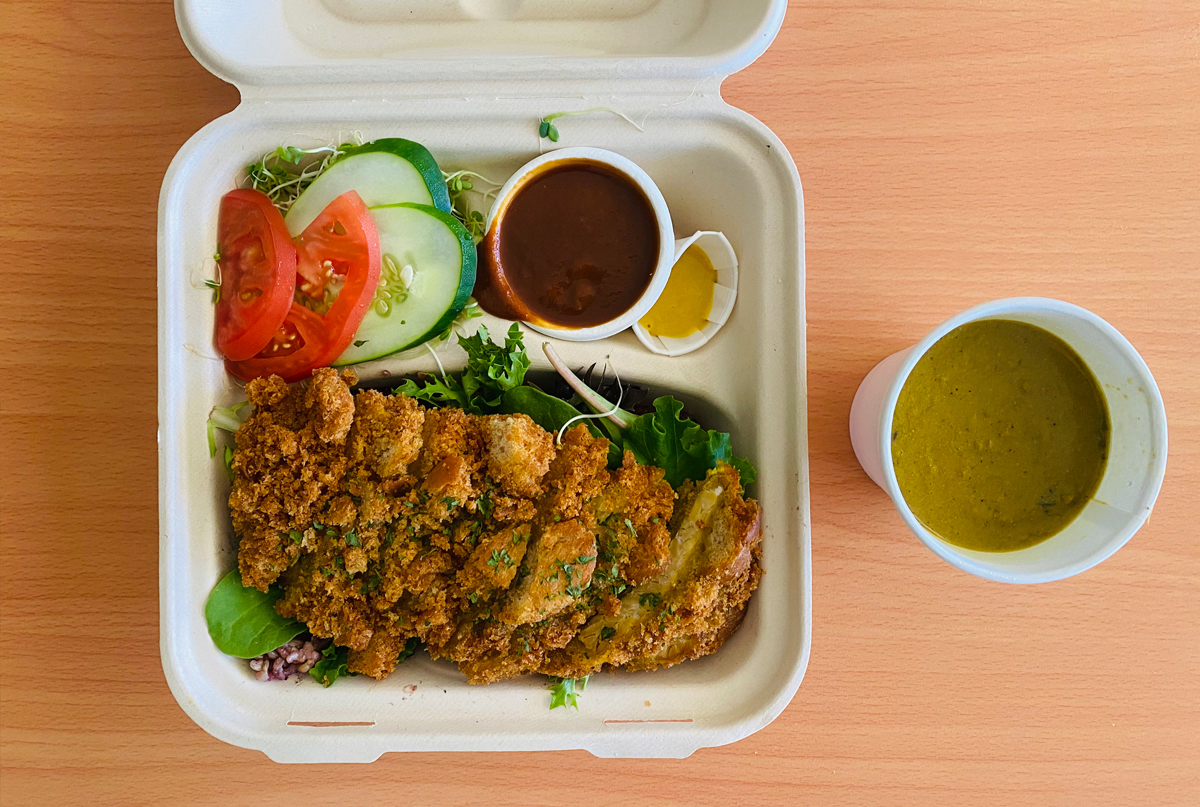 On Friday, it was a katsu curry plate from Peace Café, with tempeh standing in for the meat. The batter was light and crispy, and the tempeh itself resembled a tender, brined chicken breast.

Did I miss a day? Oh right. Wednesday.

“You have a food problem,” my doctor says after reading my test results. My 42 mostly vegan days have ended at last. “Your numbers nosedived, and I mean it in a good way. These numbers are fantastic. I didn’t expect such a drastic change in such a short period. I’d like to see you continue this diet. This isn’t a genetic issue. It’s the food.” After years of struggling to keep these numbers in check, of watching them plummet, then skyrocket, it seems I’ve found the right diet, but it’s an extreme one by necessity. “The diet has to be sustainable,” she continues. “Don’t worry if you get off track once in a while, there needs to be some balance.”

So that’s it. I’ll be flexitarian—a dietary waffler. Although these six weeks have recalibrated my food habits and tastes, the fact remains that despite my best intentions, some of my purchases will occasionally go toward animal products. I’ll need to do my best to choose humanely raised, environmentally sustainable, and healthier options. But nobody’s perfect. As sturdy as my resolve may be in the light of my delicious, newfound vegan options, it’ll buckle from time to time.

On the Wednesday in question, I had a beef tenderloin, medium rare, generously seasoned with salt and pepper, with some fingerling potatoes, and green beans sauteed in olive oil.

Failure. What a tasteless word. But if you season it well, toss in some humble sides and cook it with care, it’ll dish up nicely.