Call them dive bars, local bars, karaoke bars. However you want to name them, Hawai‘i’s dive bars have better food than anywhere else. Forget stale chips or sad bowls of nuts—here, we eat kalbi or fried chicken skins or lup cheong and cured duck clay pot rice alongside our shots of Jack Daniels. We see you Arnold’s, Suzie Wong’s, Smith’s Union and love you, too. But these are the unpretentious bars we go to when we want to feed our stomachs as well as souls—places that tell us to come as we are, however messy and hungry. 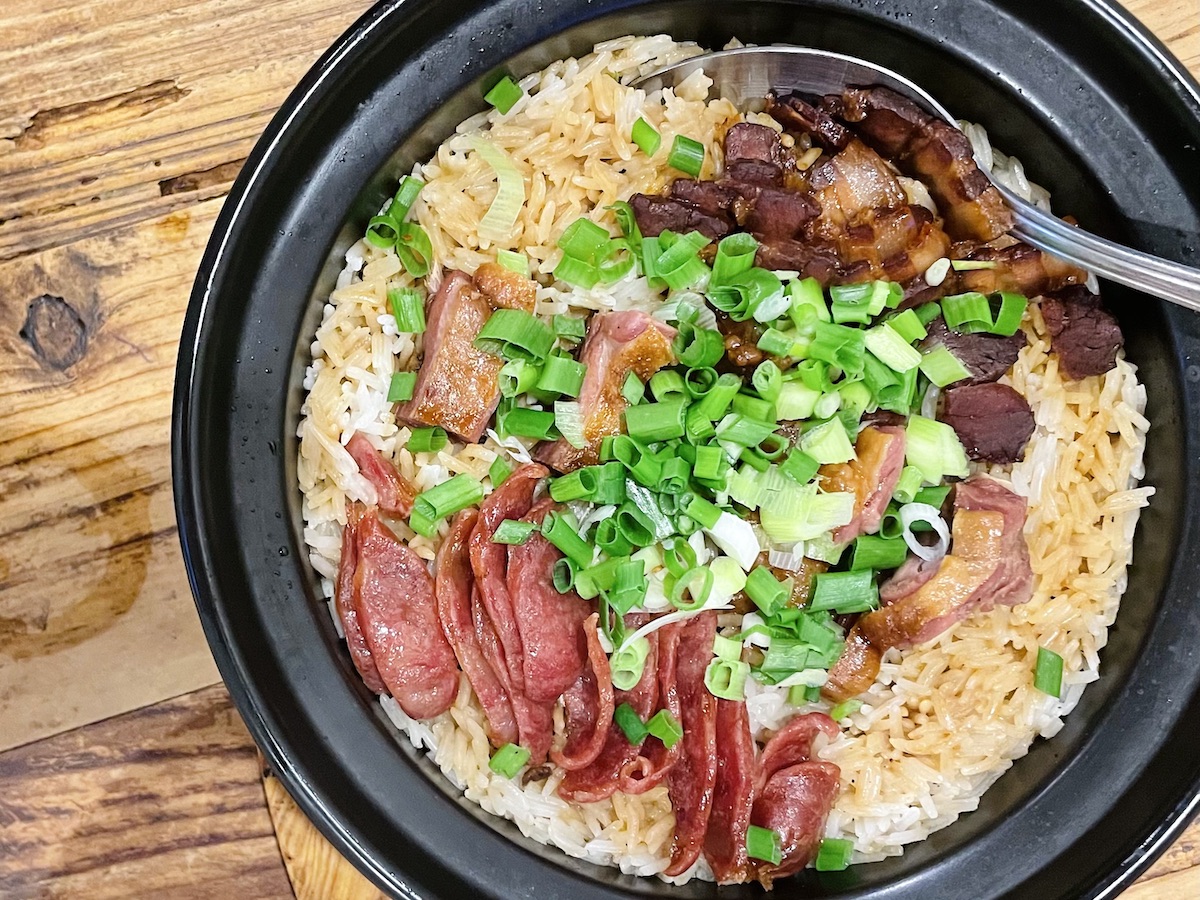 Next to Club Femme Nu, Red Cafe has two small dining rooms, one dark like a dive bar, the other more restaurant-like, if you don’t go when there’s a karaoke party underway. The menu, about a dozen pages, is like the greatest hits from China, sprawling from Hong Kong style noodle soups to Sichuan fish casserole to salt and pepper Dungeness crab. The salt and pepper corn ($12), as boring as it sounds, is my favorite—corn on the cob quartered lengthwise so they resemble pork ribs, flavor soaking into every nook and cranny. All the benefits of corn on the cob with a bit less mess. Singapore stir-fried rice noodles ($14) is full of veggies, shrimp and Spam. I would skip the quail, dry and salty when I had it. But otherwise, adventurous eaters will eat well here, whether it’s a claypot of rice with cured duck, ham and lup cheong ($22) or Hong Kong-style shrimp toast ($12)—shrimp paste spread on white bread and fried—greasy but crisp and everything you want to pair with beer. 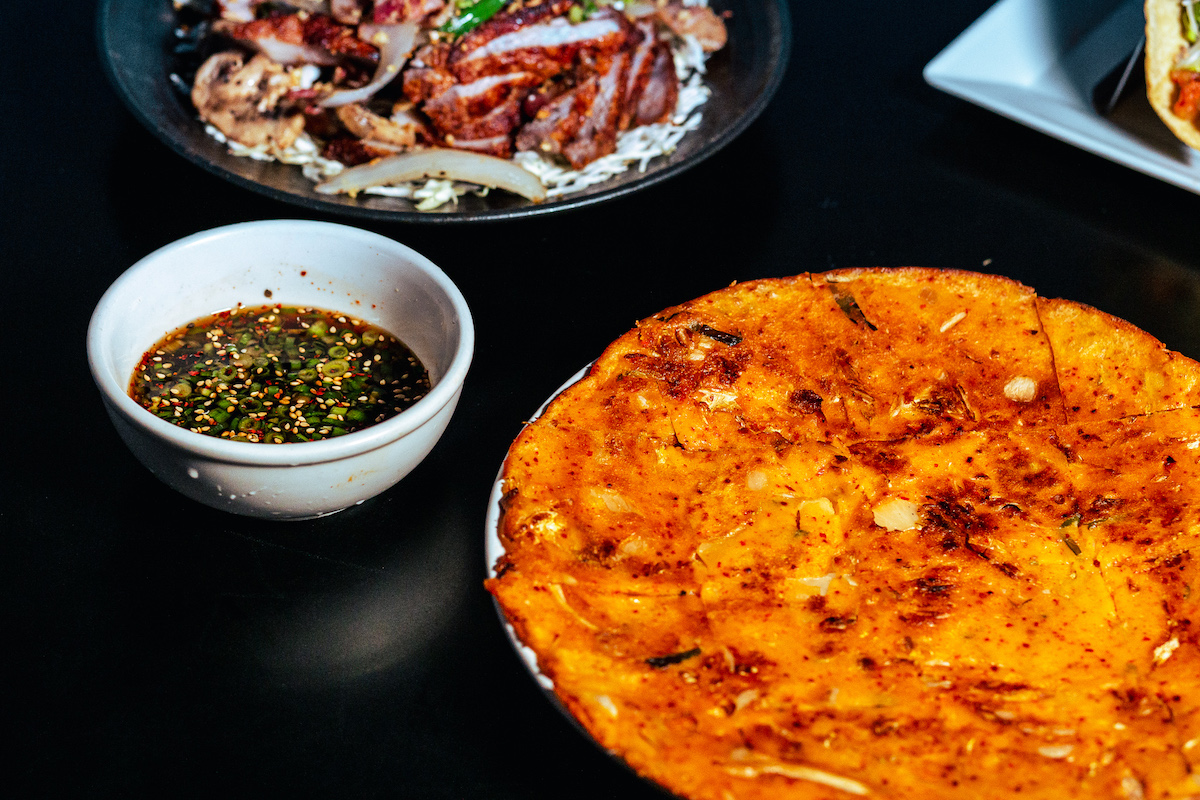 Hey Duck Butt, it’s been a minute since I’ve seen you. Your owners may be busy with other projects (Pizza Dadi, Mad Bene, DB Grill, and more on the way), and your clientele changed—K-pop in the early evening gives way to EDM in the later hours—but the food at Duck Butt hasn’t suffered. The kim chee pancake ($15) is as crisp as ever, like a thin crust pizza, and the skin on the fried Duck Butt chicken ($15) is still parchment-thin and crackly. The interior is slightly spiffed up, but the outside remains a sketchy holdout in gentrifying Kaka‘ako. 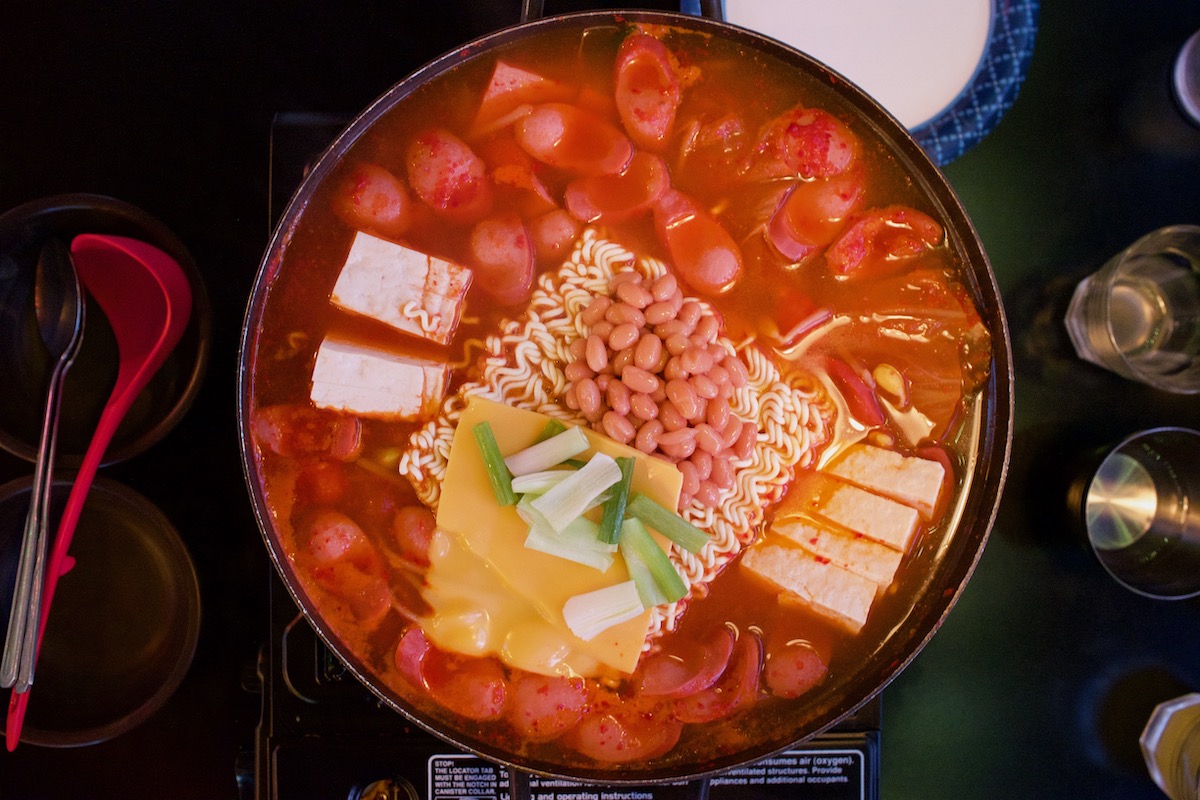 When you want to go beyond the Korean bar food basics in Honolulu (aka pajeon and tteokbokki), head to Cafe Princess Pig, a Korean karaoke bar hidden on the ground floor of an office building. Here you’ll find thinly sliced pig’s feet and simmered beondegi (silkworm pupae). The budae jigae ($32), big enough for four, is the crowd pleaser—a bubbling stew of canned beans, luncheon meat, hot dogs, instant ramen and American cheese, a dish invented after the Korean War, making use of the American army’s provisions. But I prefer the smaller dishes—the dosirak, or Korean lunch box, ($10) with banchan, luncheon meat and a fried egg over rice; and the plump soondae ($16), or blood sausage, served with a dipping chile salt that reminds me of Tajin. 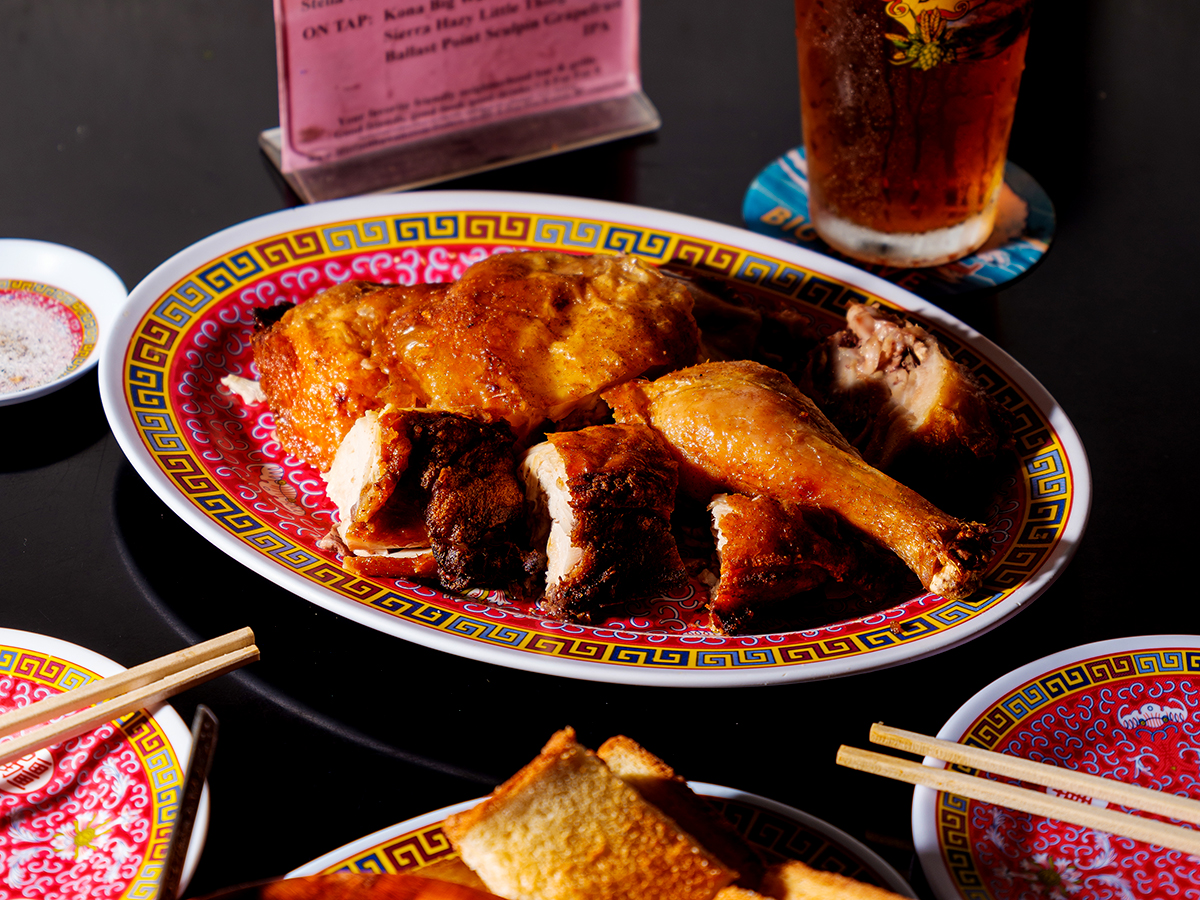 My favorite dive bar for food, I come for the Fat Fat chicken ($14), a Cantonese-style fried chicken that liberates the bird from breading to let the skin’s crispness shine. And I come for the vegetables, a rarity at dive bars, either the ong choy ($9) or romaine lettuce ($8), both stir-fried with plenty of garlic. Plus, there’s even dessert, another overlooked item at most bars. Bite-sized jin dui ($5) and yuzu cheesecake ($3 for a small slice—you’ll want one per person) are the best end to a night at 8 Fat Fat 8. 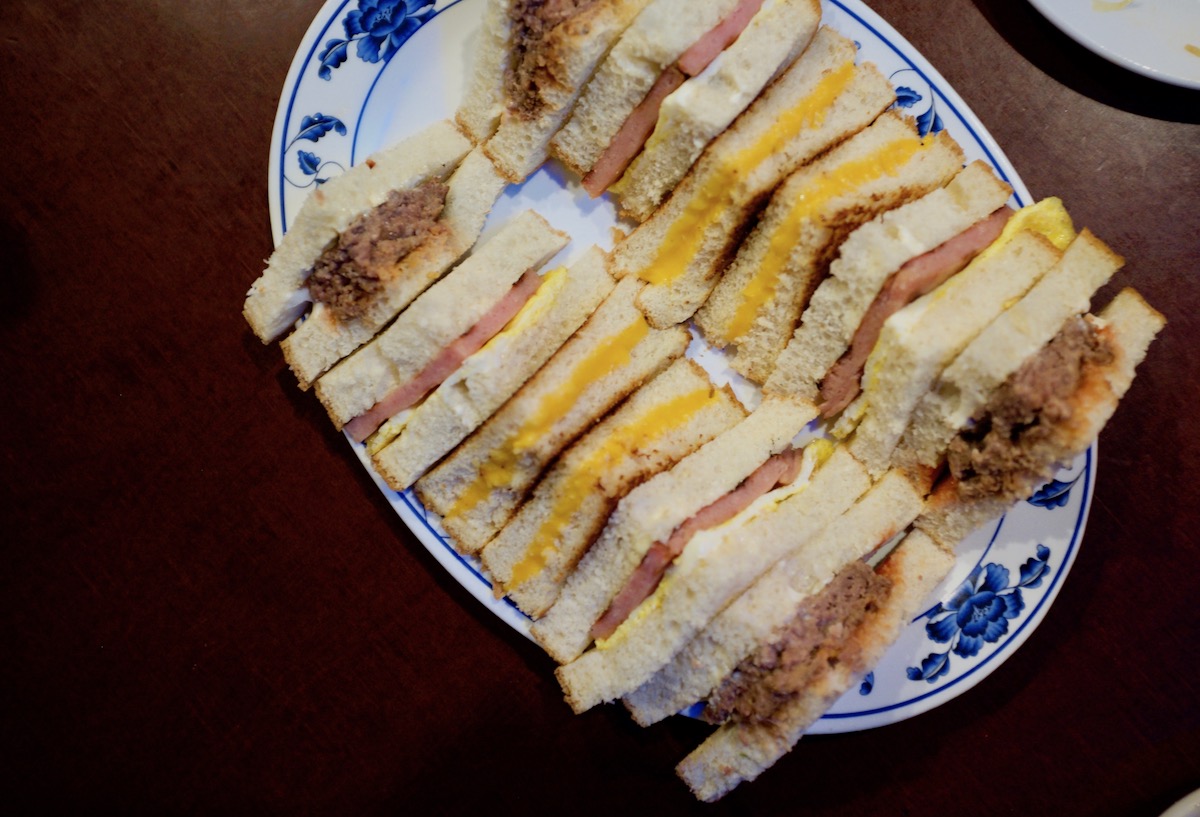 When Anyplace left its home of more than 40 years to move into a former bank, a space twice the size, I worried it would no longer feel the same. At the moment, the new space has a ramshackle quality with plastic picnic tables and folding tables, but the original vibe lives on in the old booths and brass-studded saloon chairs brought over, the walls painted the same shade of green as the old spot, hibiscus printed fabric draped over the windows. And of course, the food is still the same: old-school local comfort food like saimin ($7.75), Obachan’s fried chicken ($16), skin-on thighs, juicy and crunchy; and its famous Spam and egg sandwiches ($5.75 for half, $10.25 for whole). 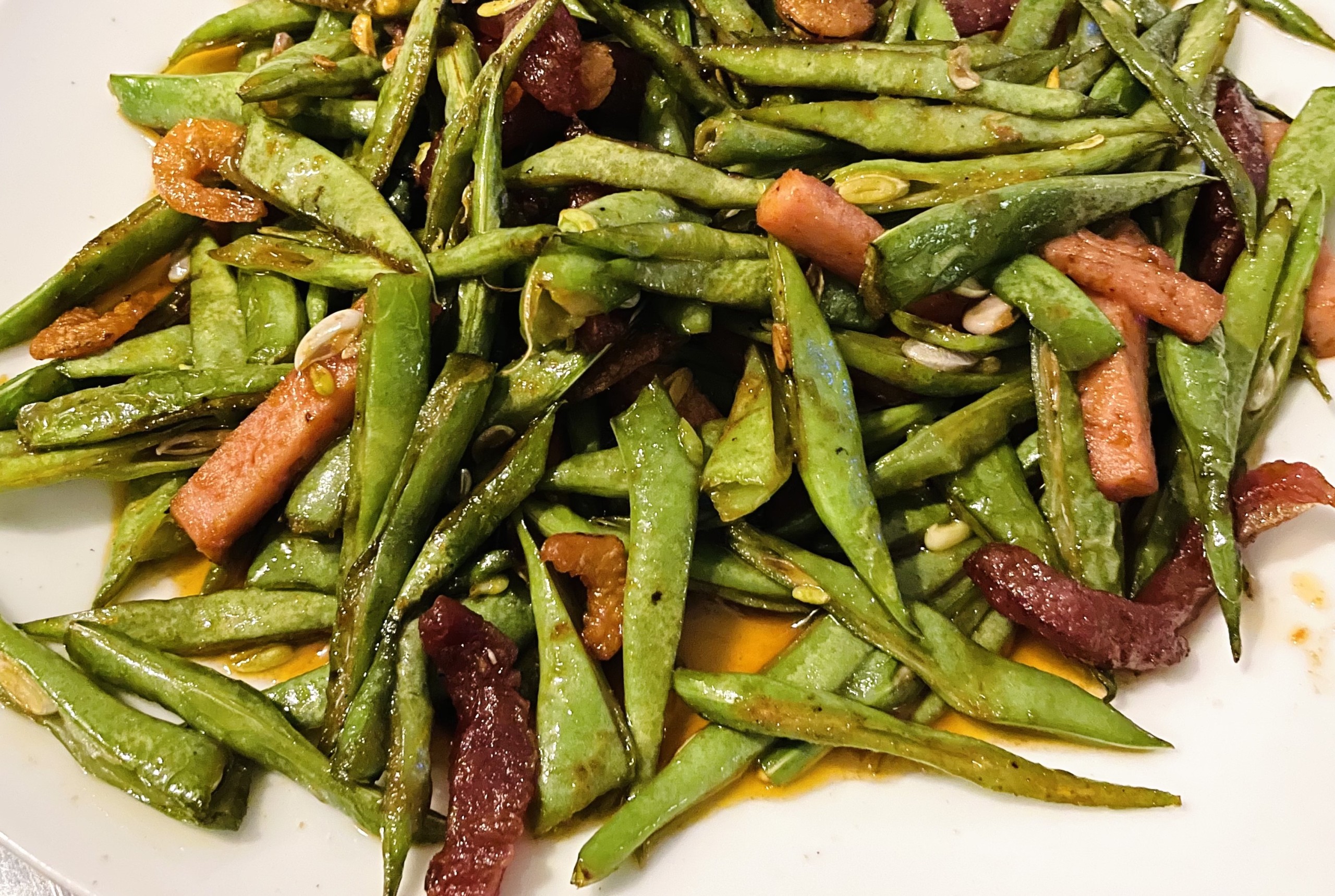 Shinsho Tei’s menu, like this neighborhood local bar, is small but mighty. The first three items on the menu are green beans. Green beans! I would come just for these, the deluxe style ($18) stir-fried with Spam, lup cheong and tiny dried shrimp that taste like they’re deep fried, echoing the crunch of the beans. (Also, if there were one commonality across the menus of all these bars, it might be Spam.) Regulars know to order it over fried somen. Start there and see where the night takes you.