Brunch at Podmore Is Worthy of a Special Occasion

The posh Downtown Honolulu cocktail bar has rolled out a brunch menu fit for a queen.

The morning of our brunch reservation at Podmore, I’m excited and hungry. I even do my hair and put on makeup, a dress and heels. Something about the lavish cocktail bar makes you want to blend in with its jewel-toned crushed velvet seats and polished brass details—it all feels special occasion. I’ve been once before, for evening cocktails and bar bites, and liked what I tried of the former more than the latter. But I loved the space, and this is brunch, which means a different menu and a brand new adventure.

For Podmore’s husband-and-wife partners Anthony Rush and Katherine Nomura, “brunch by day, cocktails by night” has been the concept since work began on the second-floor space in Downtown Honolulu nearly three years ago. The cocktails debuted in August; brunch reservations went live on Nov. 20. Having experienced Rush’s sensibilities at Senia, where he is the chef and owner, and Podmore, I’m expecting the morning to be posh and extravagant. And exciting. 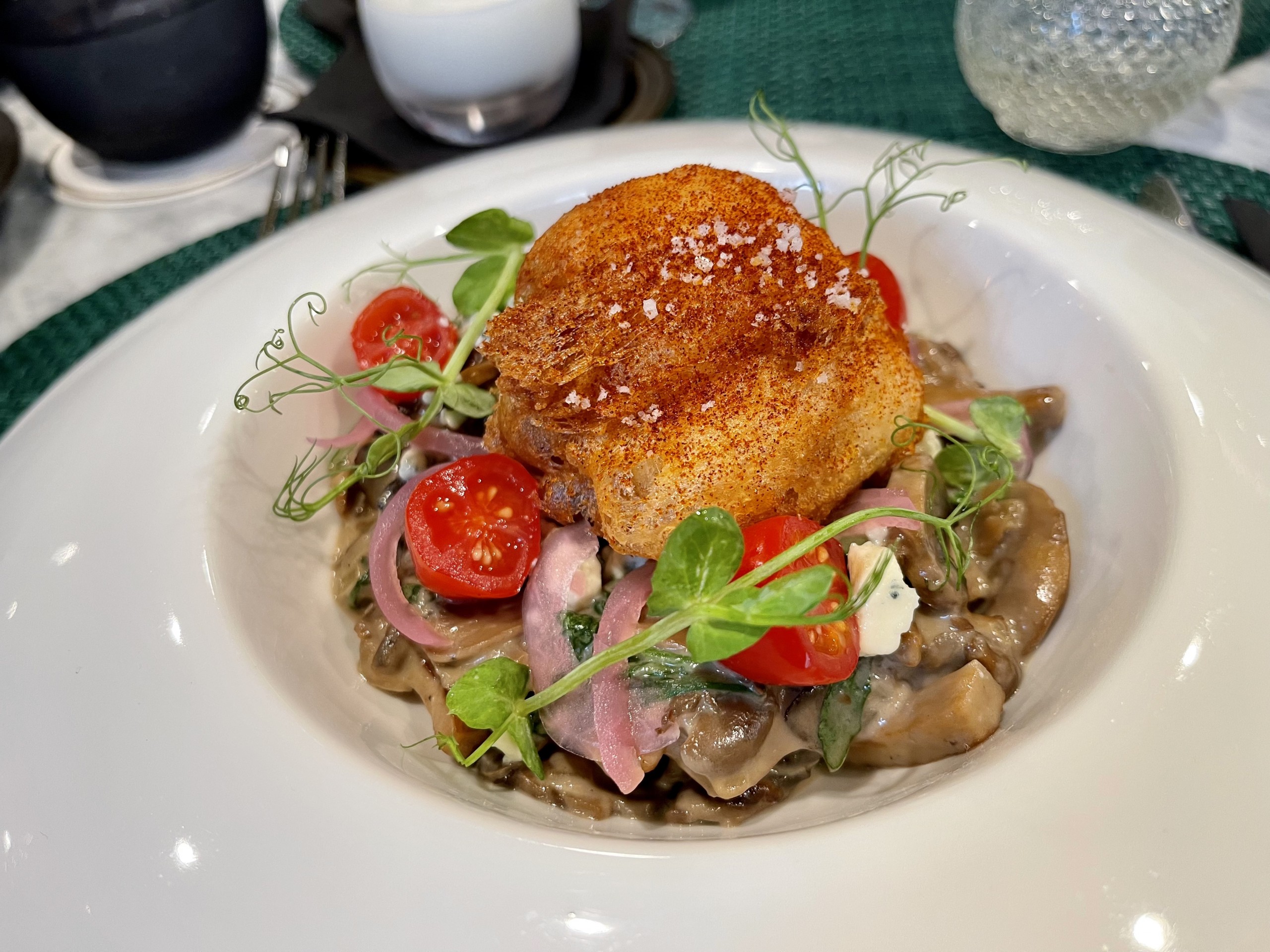 We order drip coffees while deciding that we want to try almost every savory option on the small menu and both sweet options. The coffee is good, but when I notice that the elaborate setup at the next table is cold brew, I decide I’ll order that next time. My daydreams are interrupted by the arrival of the beer-battered crispy egg ($22), a golden-brown gem cradled in pea tendrils atop a mushroom ragout, with chunks of blue cheese, pickled cherry tomatoes and onions throughout. Breaking into the egg releases the orange OK Poultry yolk onto everything. The creamy, salty funk of the blue cheese goes beautifully with aromatics and the woodiness of the mushrooms. The tomatoes burst with sweet and tangy juice, playing well with the rich egg yolk and crunchy tempura batter. 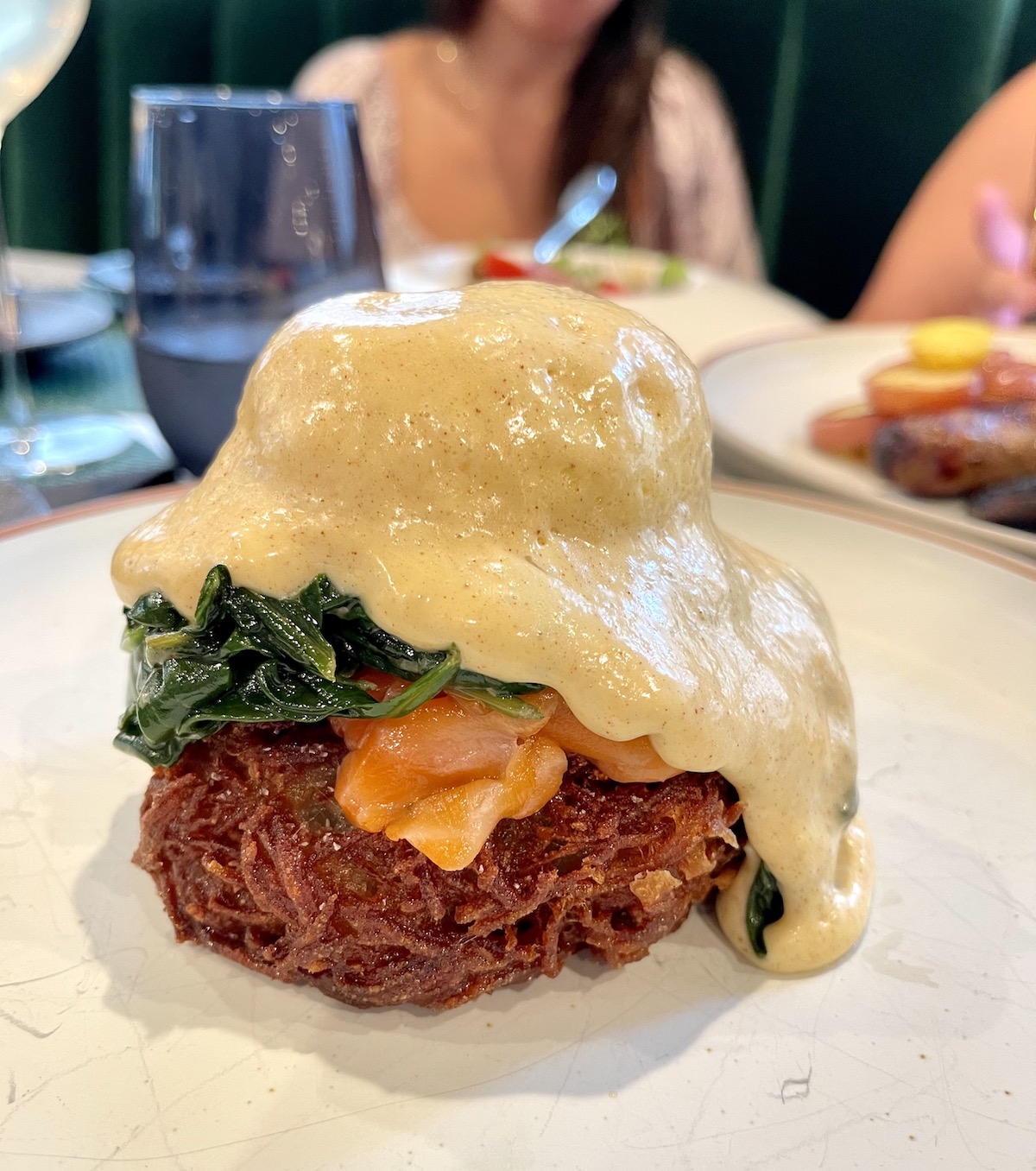 When I see an item called “Christmas Breakfast” ($24) on the menu, I have to ask about the story. It turns out that one Christmas, Rush and Nomura found themselves in a snowstorm, unable to leave the house. The result inspired this twist on eggs Benedict with spinach and smoked salmon atop a potato rosti. It teaches us two things: Potato rostis make infinitely better bases than English muffins, and chefs really do have the best things in their fridges. The combination of the velvety brown butter hollandaise marrying with yolk and dripping into the crevices of the crusty potato rosti is enough to make us order another rosti to enjoy with sweet and tangy house-made ketchup. That will be a thing I do on every visit from now on. 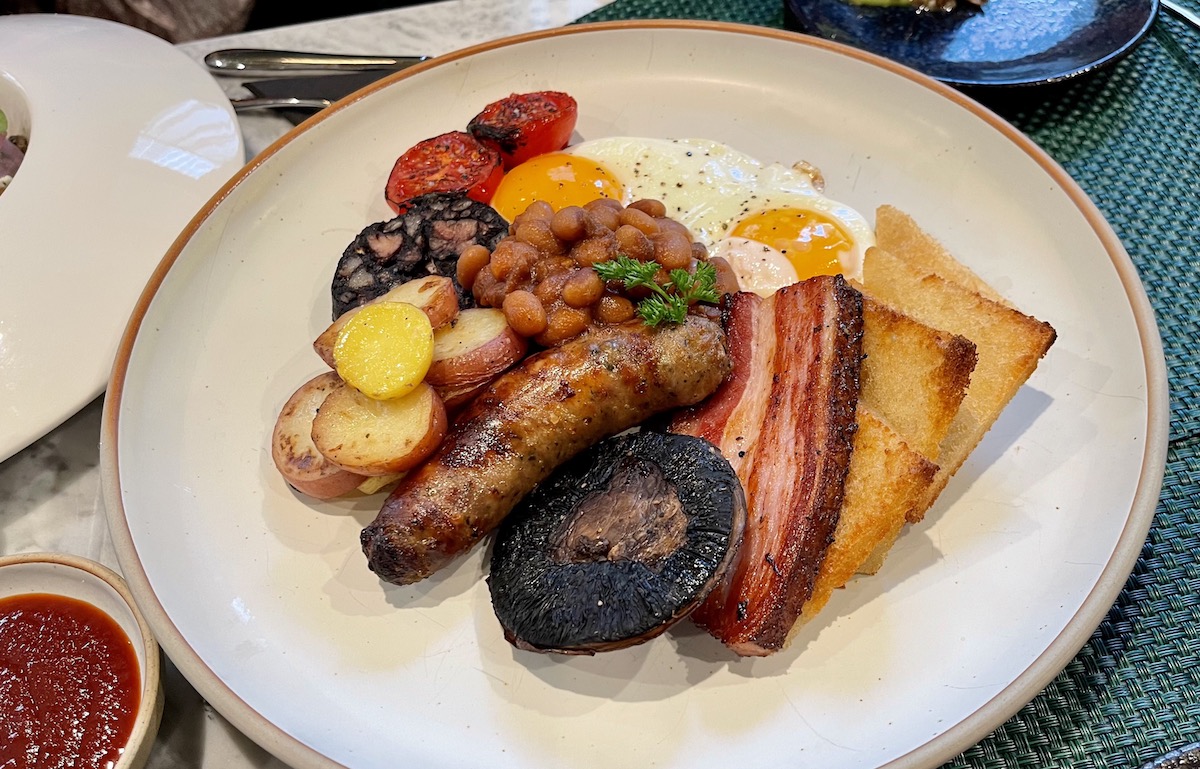 Enter the full English breakfast ($28), one of the few Honolulu has seen. Rush and his team make each item in-house, from bacon to black pudding to baked beans. Although we may not understand the soulful joy that this plate brings to a UK native like Rush, we can appreciate the tasty parts that make up the whole: rich, moist black pudding; a Pono Pork sausage; and baked beans so good I’ll probably order a side next time. Seared tomatoes and a portobello cap offer lighter textures and umami. The English breakfast is an exception to my observation that Podmore’s portions run smaller, so it would be the best bet for your loco moco loving friend. 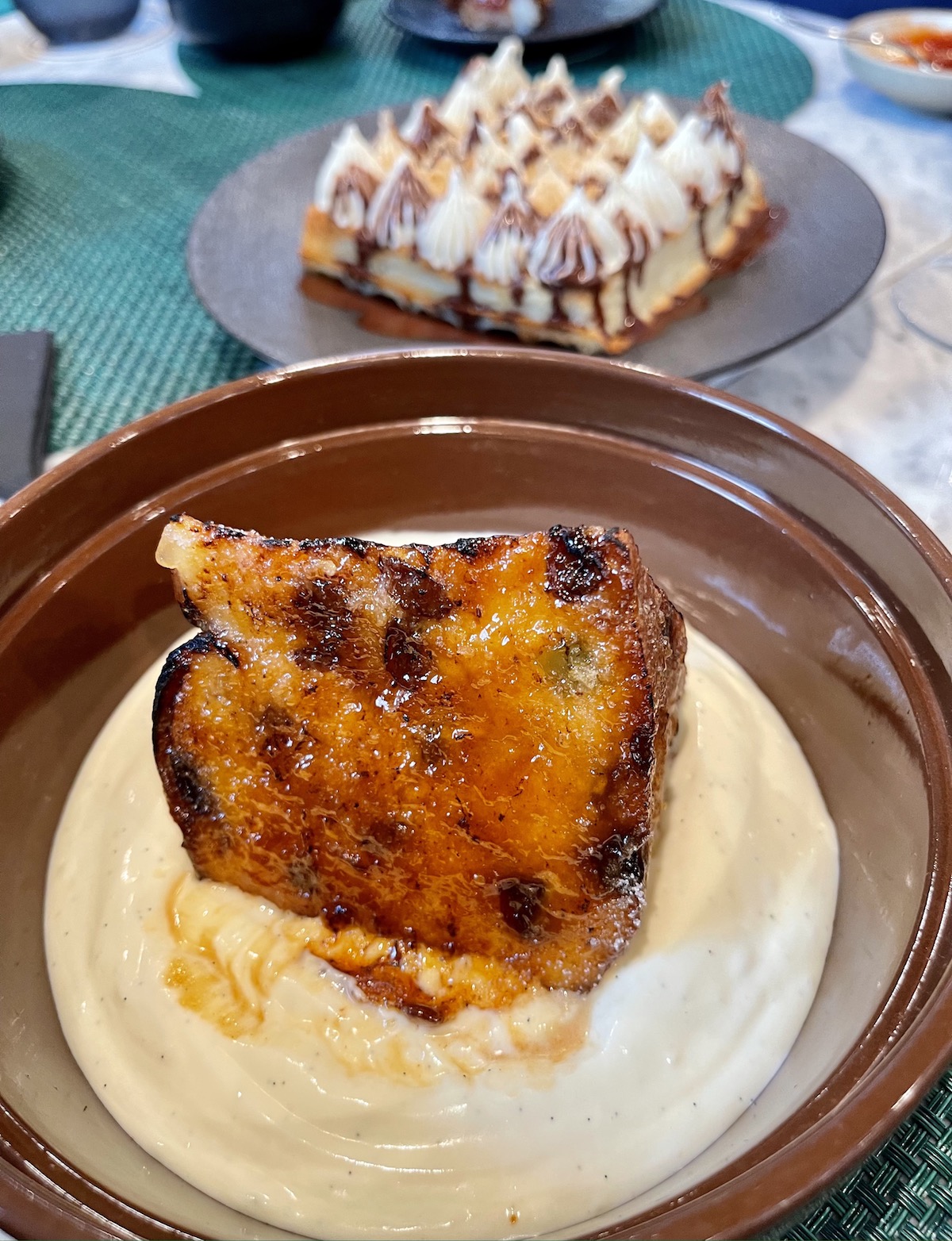 We order the raised waffle ($12) topped with white chocolate cheesecake and dark chocolate sauce; it’s good but heavy for my taste. What steals the show is the Italian toast ($20), a take on french toast but using a brûléed panettone in a vanilla crème mousseline. I said it at the table and I’ll say it again: This is like a bread pudding’s wet dream. It’s so good. Crackling burned sugar houses warm panettone with bits of liquor-soaked dried fruit. The velvety mousseline with flecks of La‘ie vanilla grounds the dish with only a light sweetness. Add this to the list.

We sit at our table, chatting as we claim the last bites of our favorite dishes. Podmore brunch is not a gorge-fest, but an occasion better approached as a whole experience. Take your time. Soak up the ambience. Enjoy the food. Have a coffee and then a cocktail, why not? Only one of us drank, we ate until satisfied and paid just under $50 per person. It’s a higher-end brunch, so compared against O‘ahu’s bombucha breakfast and brunch options, Podmore may not be for everyone. But I loved almost every dish and already have plans to return—for a family brunch on my mom’s birthday. A very special occasion.