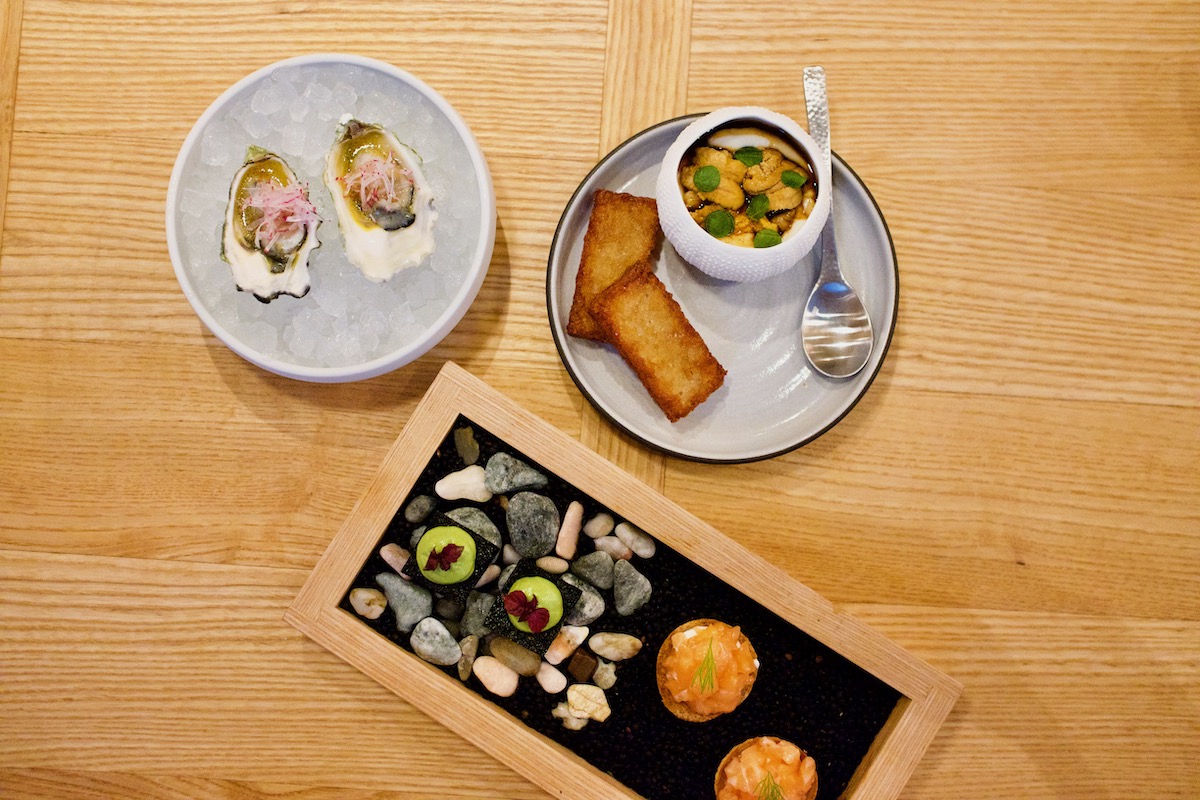 We can’t help noticing the playlist at Bar Maze. It greets us with Toto’s Africa, amuses us with All-4-One, and then—surely a coincidence—as we head into the denouement of dessert, soothes with Janet Jackson’s sultry That’s the Way Love Goes.

Tom Park, who created the playlist, said it was mostly what he likes and “songs that people are like ‘wow I love that song and haven’t heard it for a long time!’” In that way, it’s in direct contrast to the tasting menu served at Bar Maze. Whereas much of the a la carte food menu in the mezzanine cushions you in familiarity, the four courses with cocktail pairings downstairs, to borrow Janet Jackson, “take you places/You’ve never been before” and are just as intimate as her lyrics. From the six seats at the bar fronting the postage-stamp of a kitchen, you can see chef Ki Chung and his cooks prepare every dish, one at a time, with tweezer precision.

Dinner downstairs begins with a “snack set,” including a luscious pot of uni and potato cream served with potato croquettes (a ringer for hashbrowns), and tiny crisp nori chips sandwiching a shiitake jam that’s dark, sweet and mysterious like tsukudani. 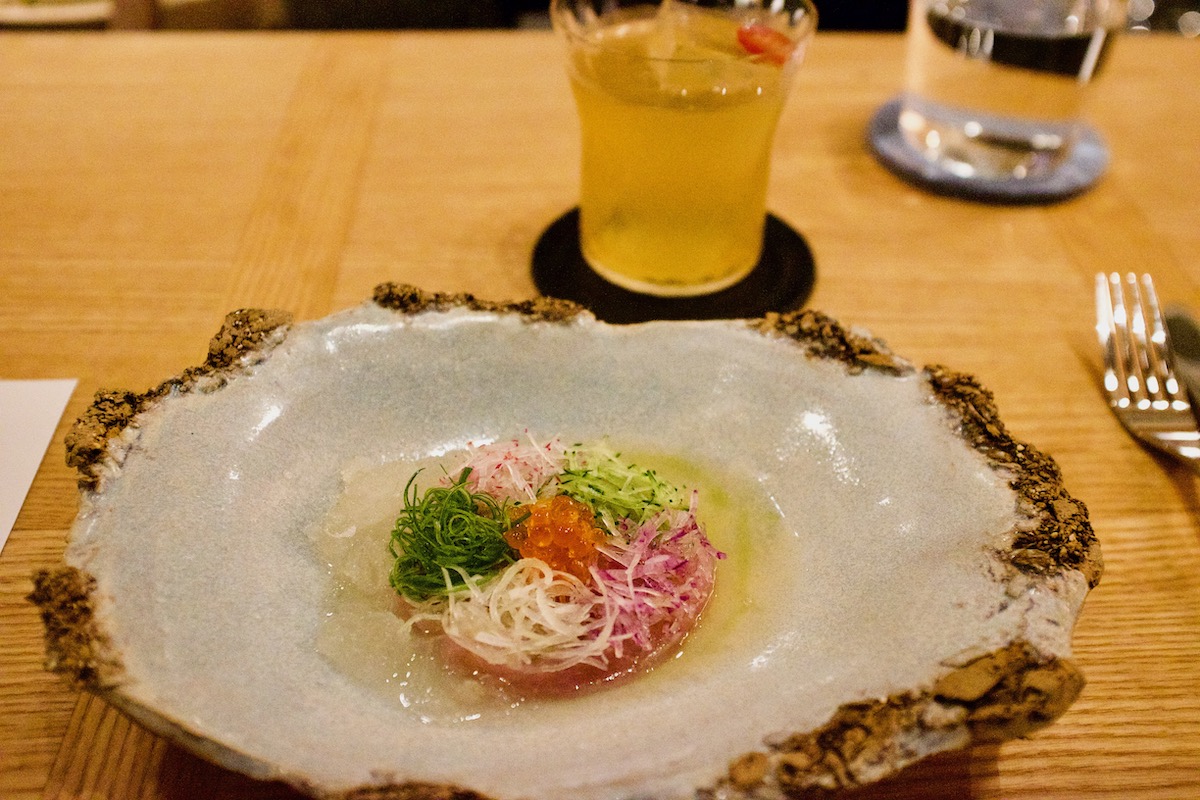 Chung’s techniques create layers of flavors, as in slices of cured kampachi mounded with shards of radish, purple daikon and smoked trout roe, in a pool of melting mild white kim chee granita—the result, especially in ceramics by Brooklyn-based Nicole Pilar, resembling an oyster shell, is like a tartare of the sea. 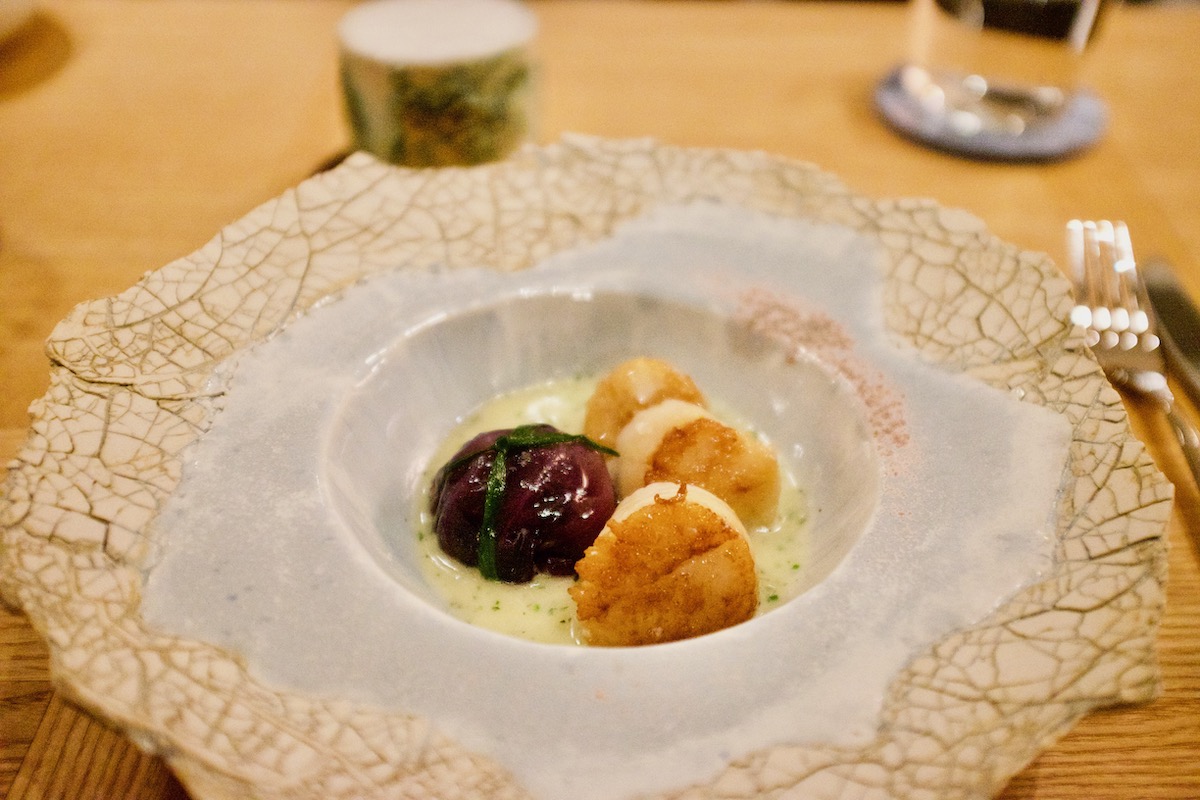 What really sets Bar Maze apart, though, are the cocktail pairings, which often underscore a dish, as in the fizzy and light glass of sake, champagne and clarified fruit, including kiwi and yuzu, that highlights the bright calamansi and yuzu kosho notes in the snacks course. Then there’s the drink that’s like Yakult all grown up, a green tea yogurt spiked with aquavit. The body of it echoes the lush citrus dashi beurre blanc in the second course of scallops, while at the same time, the grapefruit, lemon, cucumber and anise in the aquavit help cut the richness like a crisp glass of white wine would.

It’s at Bar Maze that I have to eat (drink?) my words—I had told my companion before dinner that I had yet to have a zero-proof cocktail that rivals a boozy one. We ordered one tasting menu with a non-alcoholic pairing, and in more than one case, I preferred these drinks. In particular, for the abstinent counterpart to the shochu, tomato and mango elderflower cocktail, Justin Park used lychee black tea instead of the elderflower liqueur, providing the astringency of alcohol without the heat, letting the other delicate flavors in the glass harmonize more fully. 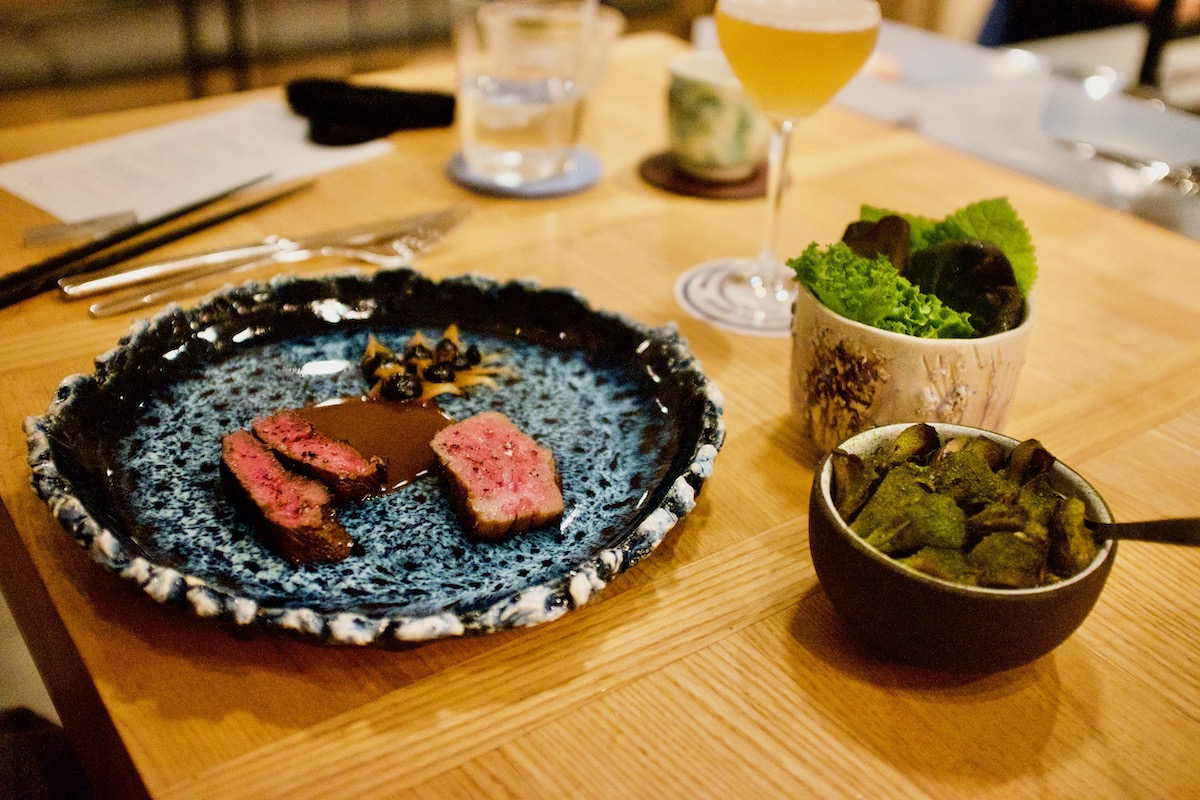 The effect of all the dishes and cocktails is of lightness, save for the third steak course, flat iron (or A5 Miyazaki wagyu for an additional $50) triple seared—first with salt, then washed in sake and pear juice, and finally coated in a tare and seared again. Between the flat iron and wagyu, I actually prefer the former, muscly, robust and beefy and perfectly paired with an Old Fashioned. This course arrives like a bo ssam, with pristine lettuces to wrap the beef into, and a bowl of maitake rice I’d love to wrap myself into. 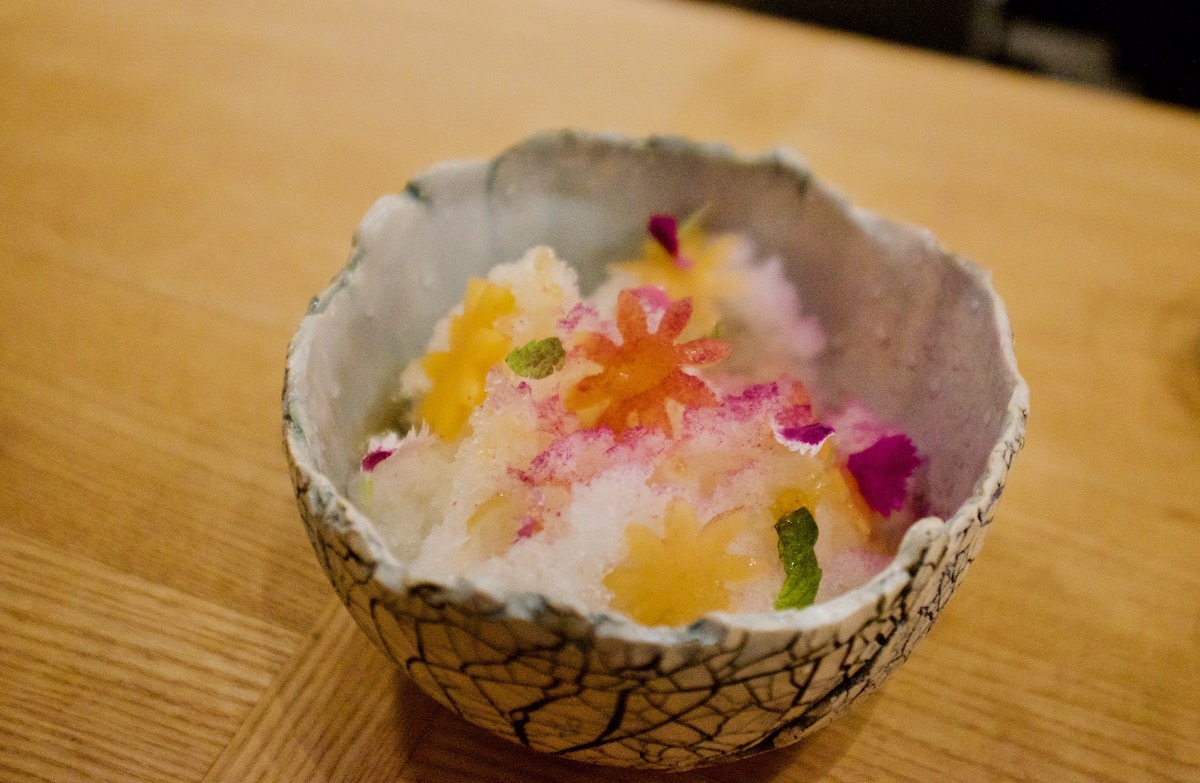 And then, lightness again, in the form of an ethereal shave ice doused in cantaloupe syrup. All of it surprising and delightful, so maybe not so unlike the playlist after all.

Chung and Park are planning a menu change soon, so it’s likely that unless you can snag a last-minute cancellation, your dinner will not be the same. But with the next menu, the two are working together even more closely on the pairings, perhaps creating a dish around a cocktail rather than the other way around as is the norm. Because really, what is normal these days?

$150 for a tasting menu with alcoholic or non-alcoholic pairings, The Collection, 600 Ala Moana Blvd., barmaze.com, @bar.maze