It was a difficult job, but we had to do it. 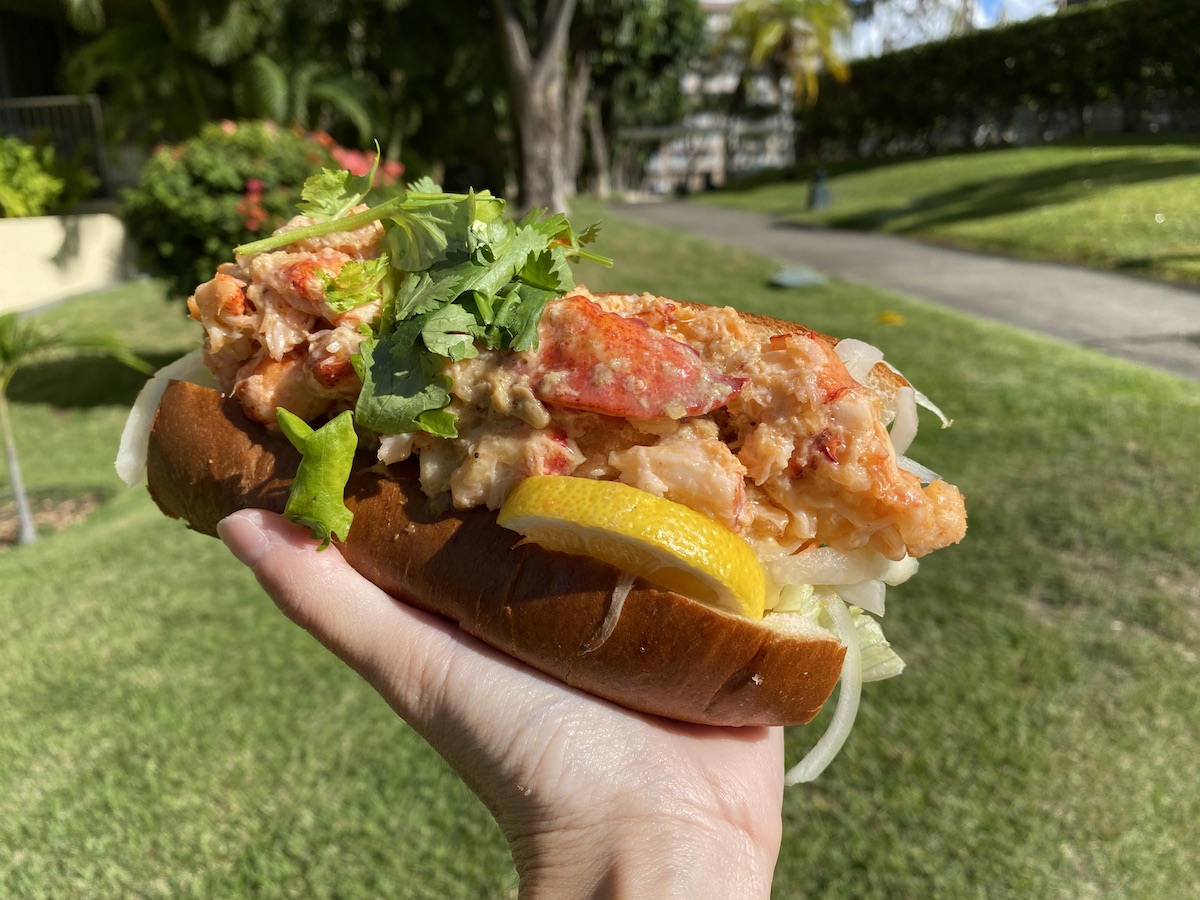 The lobster roll at Jolene’s Market made our list of top five places on O‘ahu. Photo: Kelli Shiroma Braiotta

There’s something comforting about small luxuries. The explosion of lobster rolls here proves it. I devour them every chance I get, so ranking them was a natural next step.

What makes a good lobster roll? If you’re an East Coast diehard, you’d look for cold Maine lobster meat mixed with mayonnaise, celery or scallions and tarragon piled onto a New England bun. You’ll find some of this in Hawai‘i, but local variations can get pretty significant.

I ranked O‘ahu’s lobster rolls based on amount of lobster, the bun, bread-to-filling ratio and overall taste. Besides the restaurants below, I tried lobster rolls from The Espresso Bar at Neiman Marcus Hawai‘i, Merriman’s Honolulu, Fat Cheeks Hawai‘i and Chocolate + Vanilla Bakery’s Savory Saturdays. 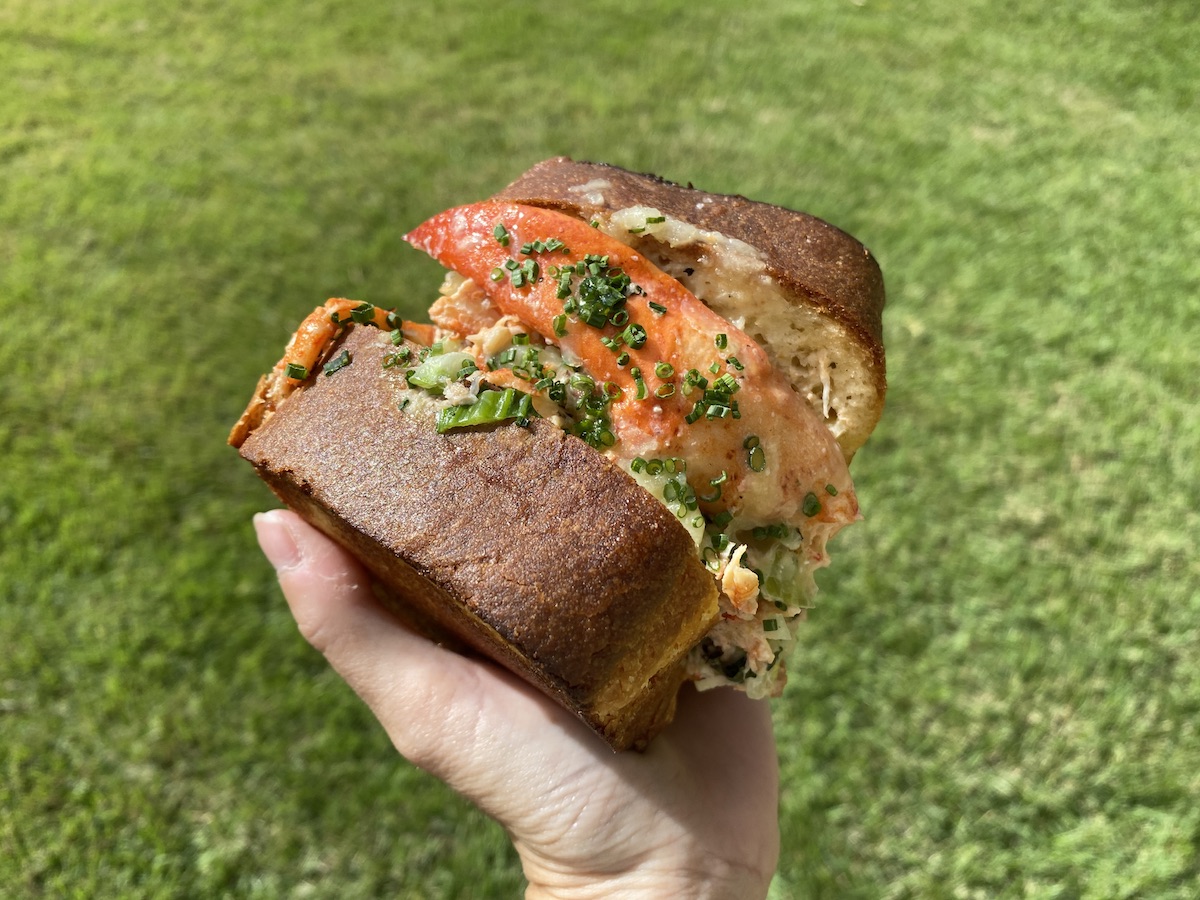 Honolulu’s newest lobster roll comes from recently opened Kapa Hale in Kāhala. It’s only available during brunch and lunch and is served solo, without any side.

This roll features three ounces of butter-poached Maine lobster, preserved lemon, celery and grilled jalapeño vinaigrette tucked inside a thick slice of chef Keaka Lee’s housemade brioche. The liberal lemon seasoning not only makes the lobster chunks delicious, it livens the entire roll. The jalapeño vinaigrette adds a nice kick and the toasted brioche oozes with butter. But the sandwich is filling mostly because of the bread—there’s a lot of it. Still, this roll is promising, and there might be a 2.0 version coming.

SEE ALSO: Here’s Why Kapa Hale Is One of Honolulu’s Most Exciting New Restaurants 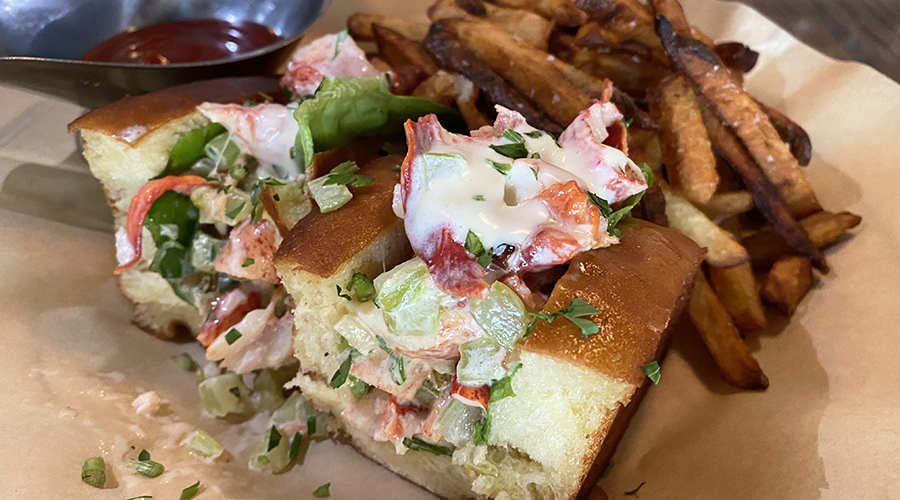 You’ll find this Maine lobster roll on the brunch menu: 3.5 ounces of lobster meat mixed with green onions, celery, parsley and lemon aioli in a buttery, grilled brioche bun made in-house. This roll is light and refreshing, with a savoriness from the brown butter hollandaise. I like that it’s not heavy on the mayo—I don’t feel weighed down, even after eating the whole thing. 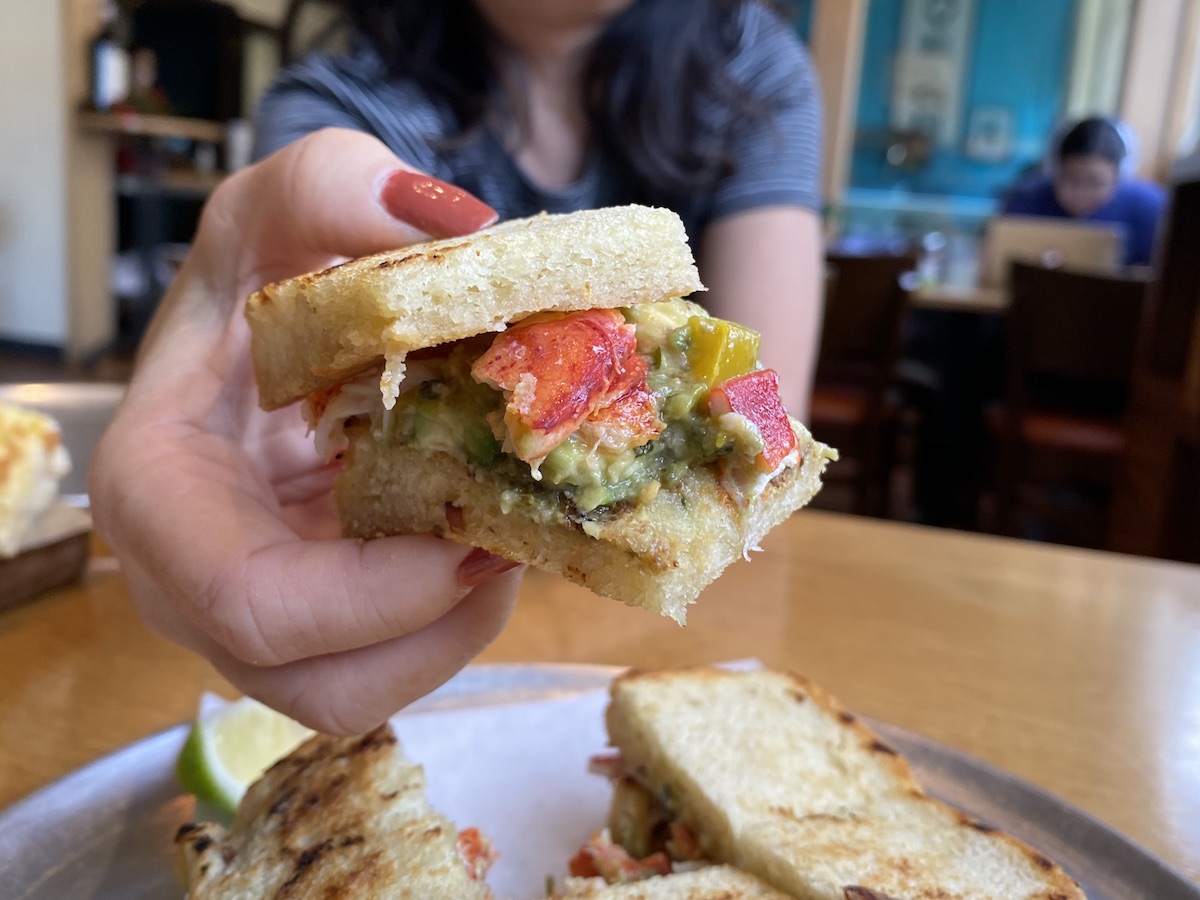 This B.L.T. is more like a panini than a lobster roll, but still very noteworthy. The L stands for lobster—nearly 4 ounces of butter-poached Kona Maine lobster mixed with a relish of avocado, basil and garlic and served on housemade bacon bread. While mixing the lobster with the relish doesn’t let you taste a lot of pure lobster, the savory mix is phenomenal. But it’s the bacon bread that takes this sandwich to the next level. 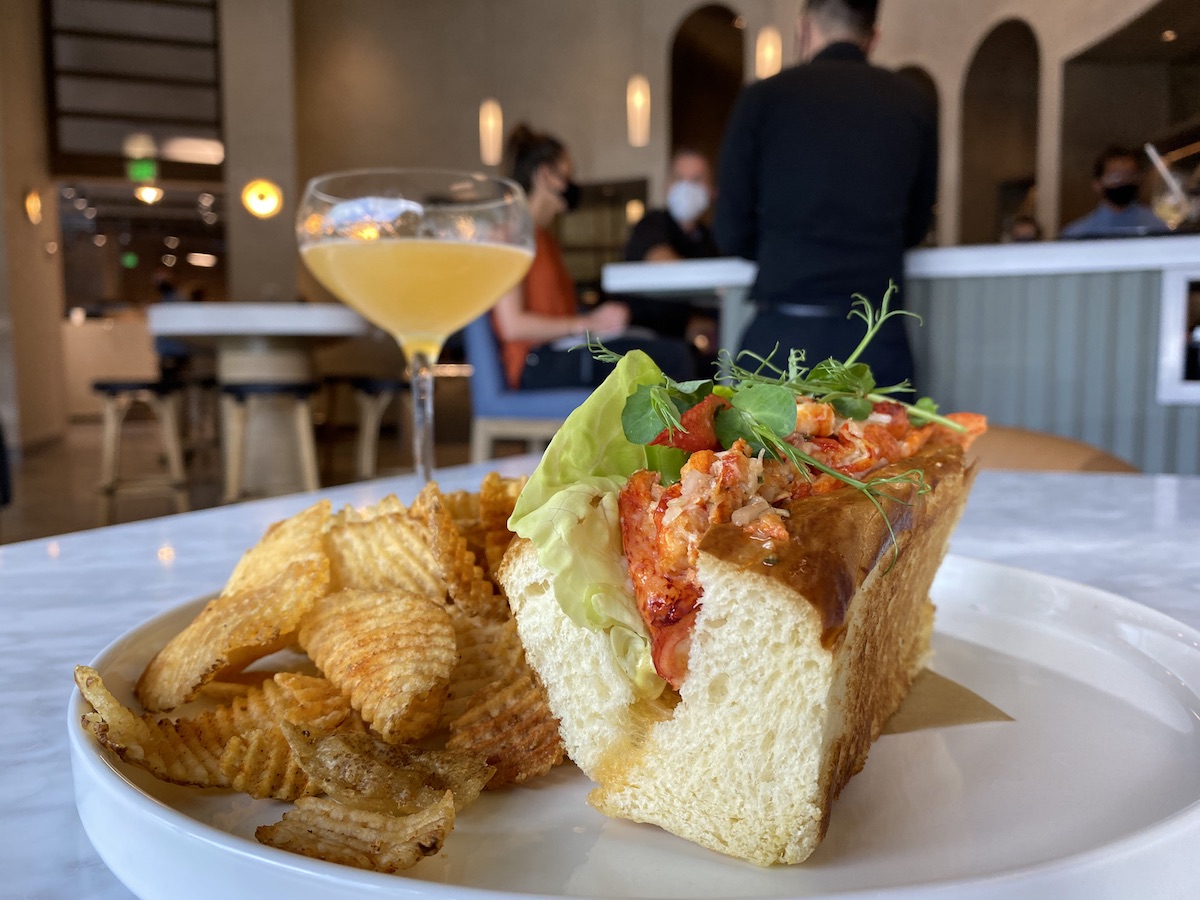 I tasted this roll at a media preview, and it left a lasting impression. It’s only a matter of time before I get my hands on it again. The lobster roll at Foodland’s new in-store Kāhala restaurant is on the lunch menu. It features 4 to 5 ounces of lobster claw and knuckle meat, curry aioli and brown butter in a lightly toasted sweet roll from This Is It Bakery & Deli, with a side of Old Bay potato chips. I love the simplicity of this roll. It doesn’t have much filler, there’s just a touch of mayo and the butter and curry aioli enhance the lobster flavor, which is deliciously prominent. My only complaint: I wish it came with fries instead of chips, but that’s me.

Tied for No. 2: Earl Kaka‘ako and Jolene’s Market 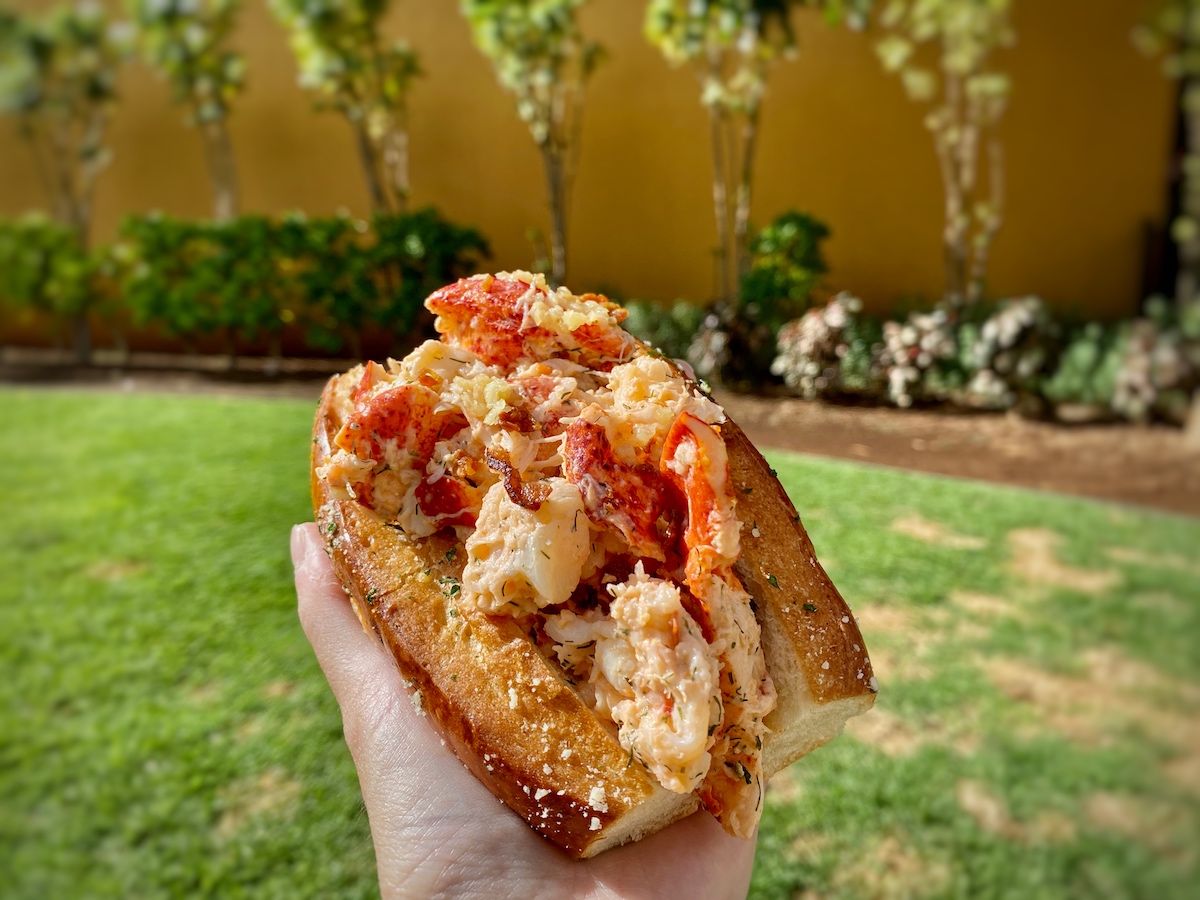 Honestly, I love both of these rolls so much that I can’t choose between them. Each is significant in its own way.

Let’s start with Earl Kaka‘ako (photo above). The eatery is heralded as the OG when it comes to the lobster roll trend in Hawai‘i. This sandwich debuted as an off-menu item last spring—a cold lobster salad mixed with sauteed garlic and bacon and served with pickles, fries and your choice of coleslaw and potato salad.

Since then, these rolls evolved and I’m absolutely loving the current version. Earl’s hot lobster rolls now have 4.5 ounces of lobster, sauteed garlic, bacon and brown butter. They come with coleslaw, pickles, a lemon wedge and pasta salad. Brioche buns from La Tour Café are sprinkled with Parmesan and parsley to up the umami factor.

The strong garlic flavor is the first thing you’ll notice. It might be overwhelming to some, but not for garlic lovers like me. Lobster chunks are dripping with brown butter, with bacon bits mixed in. Soft and slightly toasted, the buns are still sturdy enough to hold the sammie together. The bread-to-lobster ratio is pretty even. Even after I’ve polished off sandwich and sides, I find myself wanting more.

At $16, Jolene’s Buttah lobster roll is a steal. It’s the cheapest roll on this ranking and the one that will give you the most bang for your buck.

These have also evolved over time. I first tried Jolene’s lobster rolls last August, when the 4-inch rolls were $12 and featured lobster topped with Cajun sauce, lettuce, onions, carrots, butter, slaw, mayo, lemongrass, garlic and cilantro inside Japanese sandwich bread from Daily Bread, a local Vietnamese bakery. Now, the $16 rolls have more lobster, are 5 to 6 inches long and with 5 ounces of lobster, are the heftiest on the ranking. Despite the lettuce, onions, daikon, carrots, Cajun butter sauce and a cilantro garnish, there are actually less veggies so they don’t detract from the lobster. Jolene’s still gets the Maine lobster from Chun’s Meat Market on King Street, but now the rolls are baked in-house.

Here’s the experience: The buns are ultra-soft and soaked with butter, and lobster spills out with every bite. While the occasional crunch from the veggies is nice, lobster is dominant, making the price increase more than worth it.

No. 1: Feast by Jon Matsubara 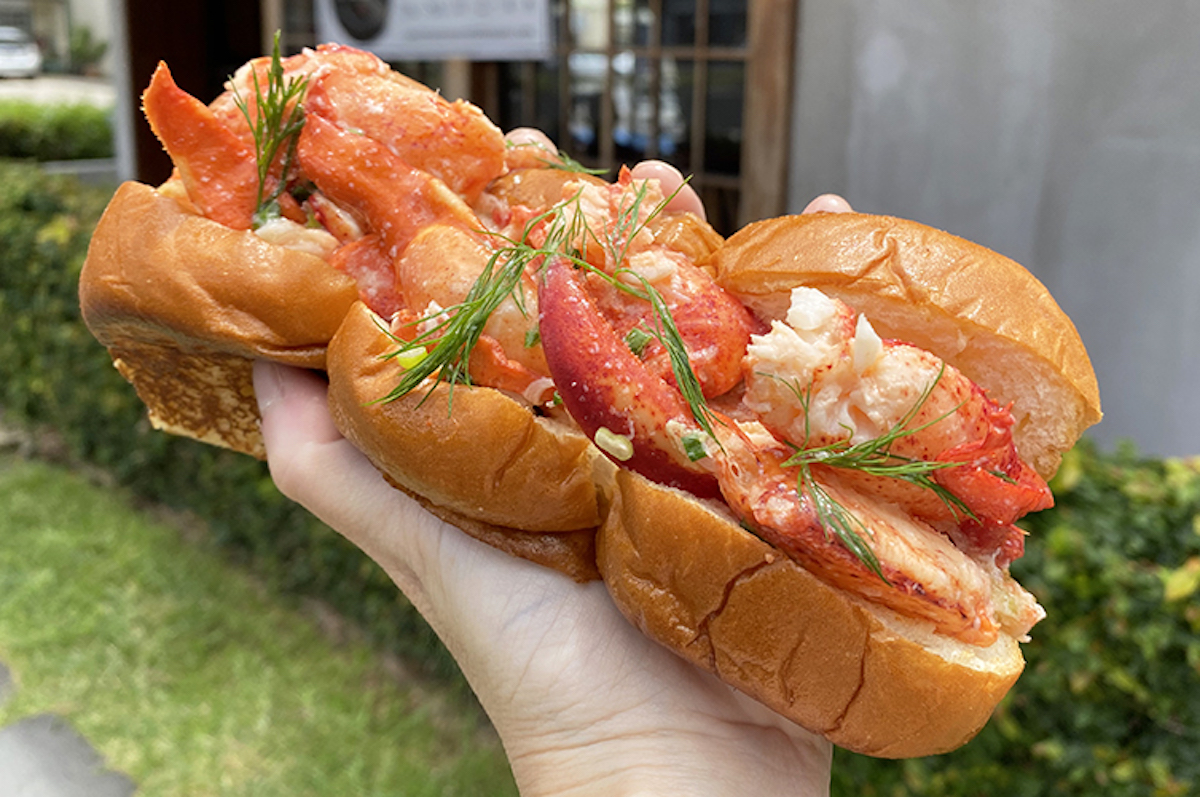 Sometimes simple is best. Feast proves that with an Instagram-famous lobster roll that debuted as a special in July and did so well that it’s now there daily.

Feast’s lobster roll was one of the best things I ate in all of 2020. Four ounces of chilled lobster meat are mixed with the restaurant’s dashi-and soy umami mayo, brushed with butter and topped with scallions, dill and Shinsato Farms Meyer lemon juice, all served on toasted King’s Hawaiian rolls with a side of shoestring fries. When I take my first bite, it’s like everything around me comes to a halt. I stop chewing. Is this real? Succulent, butter-laden, ultra-meaty lobster chunks. Creamy, addictive mayo. The slight crunch from the scallions with a lemon spritz to finish, enveloped in soft, slightly toasted rolls. It’s a mix of comfort, euphoria and a huge warm hug.