Robynne Maii, as told to HONOLULU 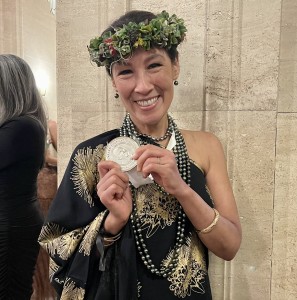 Early morning after the awards, we flew to San Francisco to meet one of our good friends, Clayton Katsuyoshi—he’s one of the grandchildren of Helen Chock, of Helena’s Hawaiian Food. It was significant to see him because I went to my first James Beard Awards with him and grandma Helena when she won the American Classics award back in 2000. So it all came full circle.

I didn’t dream of the James Beard award because I thought it was unachievable. The awards have changed drastically on who usually wins—when I first opened Fête, I didn’t have a New York City pedigree, I’m so off the radar. It’s not that I don’t care about social media or publicity, I just can’t get it together. Every ounce of my time is about food production. And it’s very important to me to have the cooks see how things are done. I really admire people that can get on TV, but I just think of that as being out of my kitchen. And I love being in the kitchen. That’s my happy place. We do some TV, but I have to feel good about it. But the James Beard wasn’t on my mind because it was so unattainable. That’s why it’s so unexpected. I’m not trying to feign modesty. For me, it’s totally true.

When my name was called as the winner, it was a feeling like when I first started dancing in hula competitions, of both the time going too slow and then it going too fast. You’re anticipating, anticipating, anticipating and then finally it happens and then, I know it sounds really cliche, but it’s like an out of body experience. Because you hear your name and then you know only because your husband is screaming that it’s actually happening. I didn’t prepare anything to say because I’m a little bit superstitious and also I just feel like people don’t usually win the first time they’re nominated.

And then it got really quiet really fast. So quiet. You feel like you’re in a vacuum. I really wanted to make sure that I thanked Emily Iguchi, who’s our chef de cuisine. That was important to me. And it was important for me to thank the Independent Restaurant Coalition and the senators and the collective effort that worked to have help come to us. The reality is, for Fête, had the PPP not come we wouldn’t be here. It single handedly saved the restaurant.

The title of best chef makes me very uncomfortable. So I wanted to be sure that everyone understood Fête is because of so many people—the investors, the staff, our purveyors, our bankers, our accountant. All of them.

When we opened Fête, I didn’t necessarily think that we were gonna change the industry, but I just felt like we could do a better job. In one little restaurant we could foster an atmosphere where people respect each other. I am very type-A, very much of a control freak, and I didn’t want to offend everyone in the auditorium, but there are things I don’t allow my cooks to do, like drink out of deli cups. They have to drink out of a real cup because they’re professionals and not a lot of people can do what we do. Even if it seems superficial, I do believe that it sends a message to people that we’re professionals. It’s just one of the smallest things but it stands for something bigger.

One of the things that I wanted to talk about in the acceptance remarks was that we are very much a mentoring kitchen. One of the reasons why Emily fits in so well is when we interviewed her, I said, “You have your pick of any job you want, having moved to Hawai‘i from New York City and with your experience, why do you want to work here?” She answered, “I want to be in a restaurant where I can teach young hungry cooks all the things that my chefs took the time out to teach me. What am I going to do, just keep all this information to myself?” We want to teach cooks how to care for food, how to season food, and how to just pay attention. Especially because we work with so much local food, that means that things do come and go. They’re all nutritious and wholesome, but they come in all different shapes and sizes. They come big, small, juicy, sour, you have to cook like the way your grandmother cooked—they knew what to do. But they don’t teach you that in culinary school.

SEE ALSO: Heyday Throws It Back with Groovy Cocktails and Bites in Waikīkī

To celebrate, Chuck and I went to San Francisco and we went to five different places: Three different bars and had one drink at each and then we went to Anchovy Bar and then Che Fico. We haven’t had a chance to properly celebrate with my family or with staff because now it’s busy. We got off the plane, went home, checked on the cat, started doing laundry and we wandered over to Fête. And then that’s when we realized they were getting their asses handed to them. So I jumped on the line. But we did open up a double magnum of Billecart-Salmon Brut Rose, which was very nice.

As for what’s next, these are just ideas: I know I’ve always wanted to do a book and then we always wanted to do something with sweets. Maybe a bakery concept. People keep asking me how it feels. It just feels weird. It feels awesome to get acknowledged from other people other than your mom. So that’s just really really special. But I do feel like having this award also feels heavy—like now I have even more responsibility to do our part. I’m not entirely sure what that means yet. But I do feel even more responsibility to continue to do good work and not just inside the restaurant but outside the restaurant. I’d like to find a way to make a broader impact. Not just a better one, just a broader one. I just want to make sure we make good decisions that are good for the restaurant and everyone that works here.