Plus we got da origin story of how dis Okinawan sweet potato poi came to be from da creator himself. 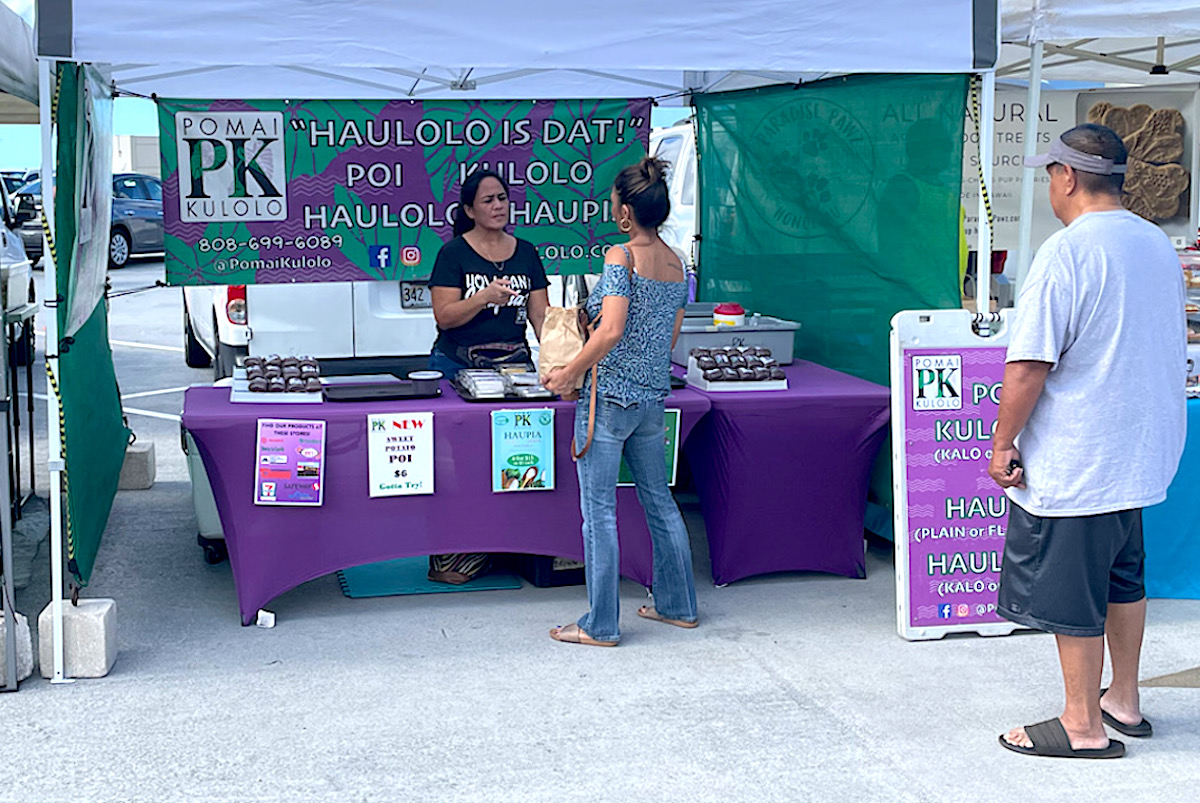 Da sign underneath da containers of poi at da Pearlridge Farmers Market said “NEW.” I wuz far away so I no could read da rest. I wondered if da sign really meant “FRESH”? Cuz what can be new about poi? Poi is poi, right?

I went for get one closer look and das when I saw da sign also said “Sweet Potato Poi.” I full Okinawan so I had for ask da girl if it wuz made from Okinawan sweet potato. And she said it wuz!

When I got home I no could wait for sample dis ‘uala poi. Most times I like for pair my poi with someting salty. Like poi + lomilomi salmon = winnahs. I know some guys who love eating their poi with sweet, like with Frosted Flakes cereal. But for dis ‘uala poi I nevah need pair ‘em with anyting. Wuz like one ready-for-eat, slightly chilled dessert. Wuzn’t as thick as kalo poi, wuz more like pudding. And da sweetness level wuz perfect. Not too sweet. Not too unsweet. Juuust right! 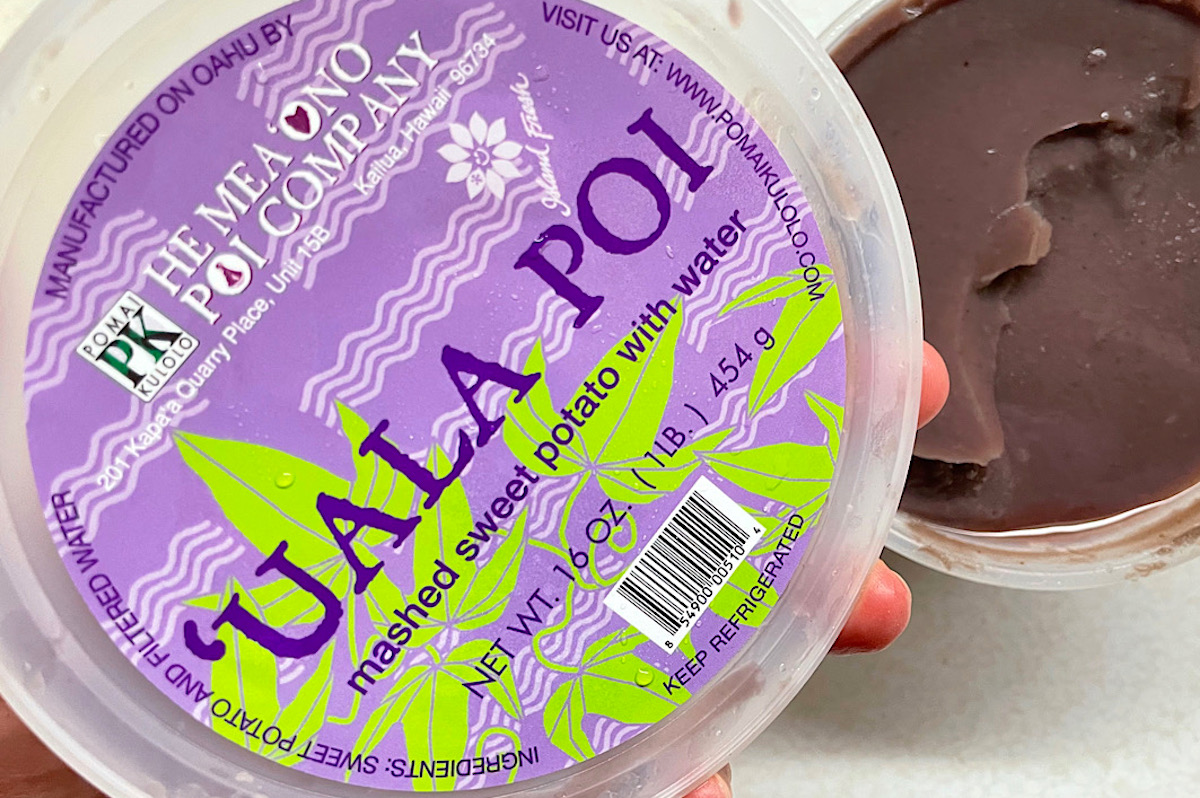 All excited, I wen go tell my Okinawan friend about ‘em. She wuz all like, “Oh das so old!” But my friend, she always ack all smarty, so old can mean she discovered ’em two hours before me. I decided for investigate and track down da creator, Keanue Kekaula of Pomai Kulolo. He gave me da full scoops on what inspired da creation of dis delightful variation of poi.

Your company stay called Pomai Kulolo, but you stay more well known for your poi now?

I started the company back in 2007. I was serving a Mormon mission in Southern California. I came home and I got into an accident with my brother’s car. It was a freak accident. Nothing got hurt but the car. So I needed to figure out how to pay my brother Pomai back, yeah. My brother was making kulolo for fun. It was a little competition he had with our uncle to see who could make the best kulolo. Family came over and tried it and told him he should sell this one. Another uncle said that back in the day when he was selling kulolo, lau lau and poi on the side of the road he used to make $30,000 a month. My brother and I were like, “Wait, WHAT? He made WHAT?!!” I asked my brother, “Brah, did you believe him?” And my brother goes, “I dunno.” But I was like, “Brah, I like try.”

My brother just so happened to have a batch of kulolo that he made for my mom’s coworker’s baby party and he had leftover. So I asked him, “What you going do with that?” He said, “Oh nothing, pau, I going throw ‘em away.” I was like, “Alright, can I have it?” So I took that, and all the burnt pieces yeah, the edges, and I re-steamed it and formed it into a crust then poured haupia over it and that’s how I got haulolo. And then I wrapped all that kulolo and I took it to the roadside, Kahekili in Kahalu‘u, and sold it. By the end of the day I had almost a thousand dollars. So there was truth behind what my uncle said. I gave the money to my brother. My brother was like, “Where you got this money from?” I was like, “I sold your kulolo.” He said, “Can you do it again?” So I asked him to make another batch. And then I did the same thing. Sold it by the side of the road. And I did that for the next couple of weeks. Then finally I asked him, “Eh, can you teach me how to make kulolo?” So he taught me and that’s when everything went into overdrive.

Then fast-forward. Because we’re working with kalo everybody goes, “Can you make poi?” And we did grow up with all this, so I was all like, there’s already so much work making kulolo and to make poi too going be even more work. But people convinced us to do it so we did it and poi’s our number one seller now. We branded our poi He Mea ‘Ono.

How come you decided for make dis ‘uala poi?

So what happened was we were short of taro one time and we needed to find something we could sell to make up the loss. We went and got [Okinawan] sweet potato and we tried to cut in taro with it, but then we said nah, we’ll just go straight up [Okinawan] sweet potato. We first introduced it in 2019 or 2020. It was only supposed to be for a short time, just to fill in the gap. But then customers kept coming back and asking, “When are you gonna have that ‘uala poi?” At first it was tough because our production [of kalo poi] is quite large, so to add in a small specialty batch is actually a big ask. Then the pandemic hit. Food businesses were essential and so we were helping by buying a lot of sweet potatoes from Maui and Big Island and O‘ahu. And with that we were able to increase the amount we were making because the Hawai‘i Food Bank wanted a variety of poi, not just kalo poi. So that’s how we were able to bring it back.

How do customers eat their ‘uala poi?

That’s a common question we ask all our customers. The answer always is we eat it with anything and everything. They treat it like poi.

So how’s da reaction been?

With ‘uala poi it’s either people really love it or hate it. I think those people [who hate it] are stuck in their heads. They have an idea of what poi is. Most of them don’t even wanna try it. Or if they try it then it’s like baby food to them. People have a preconceived notion of what they think it should taste like. But it’s gaining popularity though. People come specifically to the booth to grab ‘uala poi.

Some traditionalists might say poi should be made from kalo or ‘ulu. Early Hawaiians nevah have dis kine Okinawan sweet potato. What would you say to those critics?

I don’t speak Hawaiian, but I am native Hawaiian. If you look at what poi is, it’s just that vegetable that has been mashed up and mixed in with water. Poi is the state of something or the process, it’s not specific to the vegetable.

So I gotta ask den. People from on top da continent, dey like for get their Idaho potato and mix ‘em with milk and mash it around. So would you say that mash potato is just haole poi den?

(Laughing) Yeah, I guess you could go and say it is. Mash potato is like haole poi.

All kidding aside now. Not only tourists, but I know some Hawai‘i people who no really care for poi. How might you change that?

Right now the poi industry as a whole, I’m talking specifically about kalo, it’s basically a dying industry. So us as a company, we’ve made it part our mission to keep the industry alive and to grow the industry. For so many years poi has been too expensive for it to be a staple, right. Our goal has always been to bring the cost of poi down. So it can become a staple again. We’re trying to get people to eat more poi, or other people that haven’t eaten poi, we want them to eat poi. Try it. You can eat poi all kine different ways and it tastes good. You just gotta try it and see what you like it with and it has a lot of good health benefits and everything. Since I started making poi and selling it at the farmers market in 2010, I only had one price raise in that time.

I love that mission. I really think you should market dis in Okinawa. Could ube poi be coming up next?

(Laughing) Uh, we haven’t thought that far ahead yet.

Maybe bumbye den. For now, since ‘uala poi finally stay one regular item, where can people get their ‘uala poi fix?