Into the Boba-Verse: Bubble Tea (Or Pearl Milk Tea) in Honolulu Has Come A Long Way

Venture into the outrageous and delightful modern boba world of butterscotch foam, crème brûlée topping, soursop, purple rice and so much more.

I am thinking that the pale pink roses hanging from the ceiling of Cowcow’s Tea look like bridal bouquets, and then I see an actual bride taking photos in the (also very pink) lounge in the back. In a full white gown, with her groom by her side, she emerges with her drink and walks past the line of people waiting for their orders outside. They cross the street, get in their car and drive off. I feel as if we should be throwing rice at the newlyweds. Instead, we sip purple rice through thick straws. 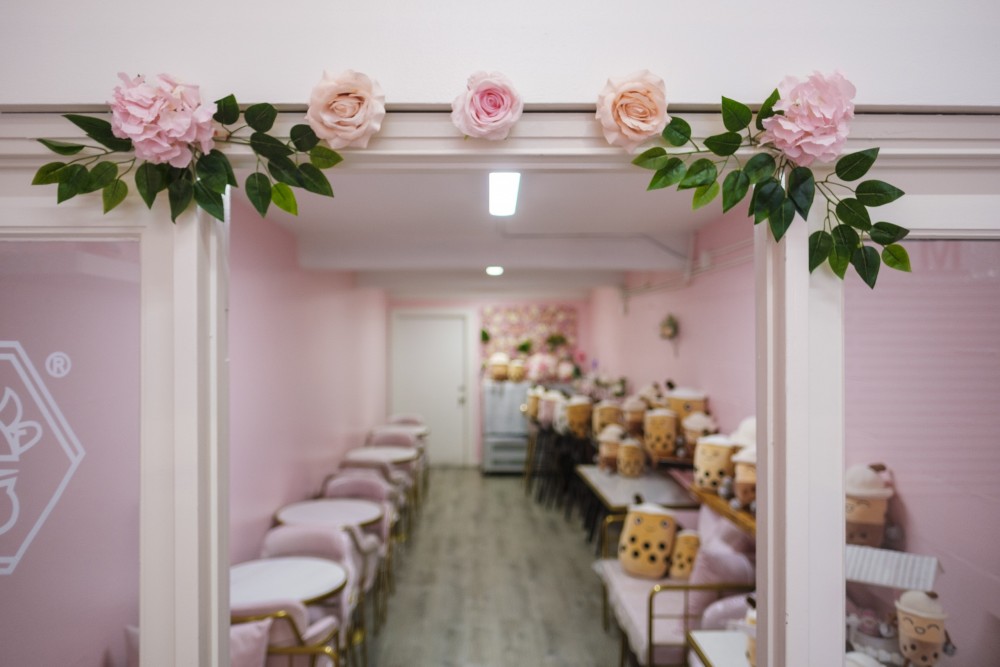 “We didn’t actually plan to take photos at Cow Cow,” she messages me later on Instagram, where I’ve found her photo. “I just wanted to get milk tea after a long day. Then the staff at Cow Cow gave us a boba plushy [and] let us in their VIP boba’s plushy lounge to take photos.” She had been on a keto diet, so this was her first drink with sugar in more than six months. Pre-keto, she would order milk tea with boba. “I loved milk tea since I was little,” she says. (She was born in Hong Kong and raised in Honolulu since she was 10.) But this time, she was trying something new—red bean yogurt with purple rice.

There has been so much newness in the pearl milk tea world ever since I had my first in the Bay Area in the early ’90s, back when black tea with powdered creamer and a scoop of black tapioca balls were the only options. Now, you can specify your sweetness level and amount of ice, real milk or oat milk, add taro or mango or liliko‘i, crystal boba or lychee jelly or chia seeds, cap it with cheese foam or crème brûlée topping, even do away with the tea and tapioca entirely, as with Cowcow’s slushy yogurt drinks. And as even Jamba Juice Hawai‘i now offers tapioca pearls, boba tea cafés have exploded in number, from Coffee or Tea?—likely the first in Honolulu—opening in 1999, to more than 60 across the island. (Some of the most interesting ones, however, such as Cowcow, declined to divulge much, whether for cultural, language or other reasons.) 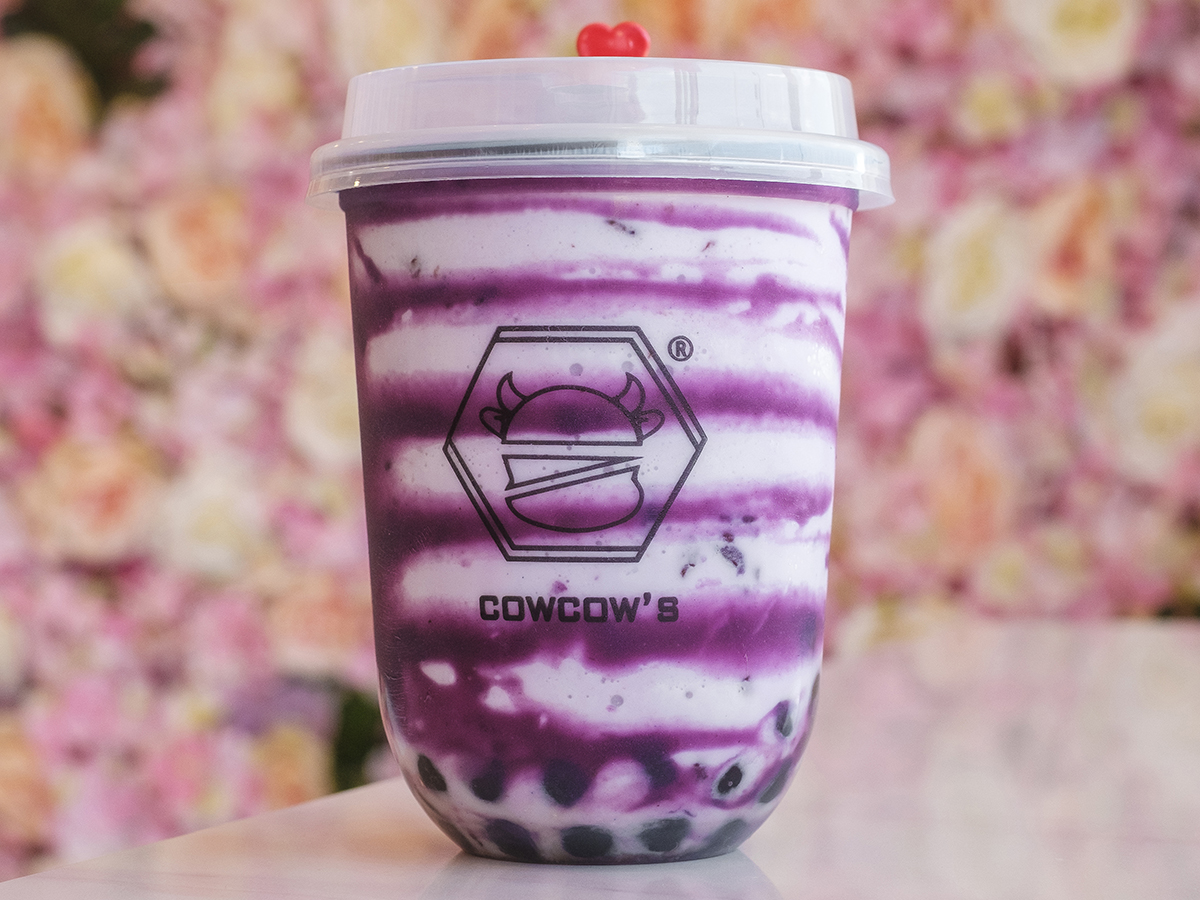 If, in the drink world, third wave coffee shops are like monogamy, maybe more deliberate and liberated than in the past but still coloring within the lines, then today’s modern boba tea parlors are more like polyamory—hip and unconstrained, infinite in combinations. They acknowledge that we all have our own preferences, that our tastes differ wildly, and with that comes a whole new set of choices.

Modern boba tea, like Alice in Wonderland, is nonsensical and ridiculous and bewildering and delightful. Rabbit Rabbit Tea Hawai‘i encapsulates all of this down to the black and white checkerboard floor. And with a logo in school bus yellow, it pops in the often bland, pastel colored landscape of boba tea shops. It’s the reason why, among all the possible boba tea franchises from Taiwan, Alice (yes, really) Chan picked Rabbit Rabbit.

For Chan, Rabbit Rabbit is a peek through the looking glass at Taiwan’s wonderland of food. “For food and beverage, I would say the U.S. is about 10 to 15 years behind what Taiwan offers,” she says. Boba is the extent of what most know of Taiwan’s cuisine. But eaters in Taiwan are spoiled. It’s where congee restaurants offer more than 50 different accompaniments, where hundreds of vendors at each night market overstimulate the senses with oyster omelets and boar sausage and black pepper bao. When Chan and her family recently visited Taiwan and were in mandatory quarantine for two weeks, they ordered from four or five different restaurants for each meal, like a buffet, so plentiful (and cheap) were the options. 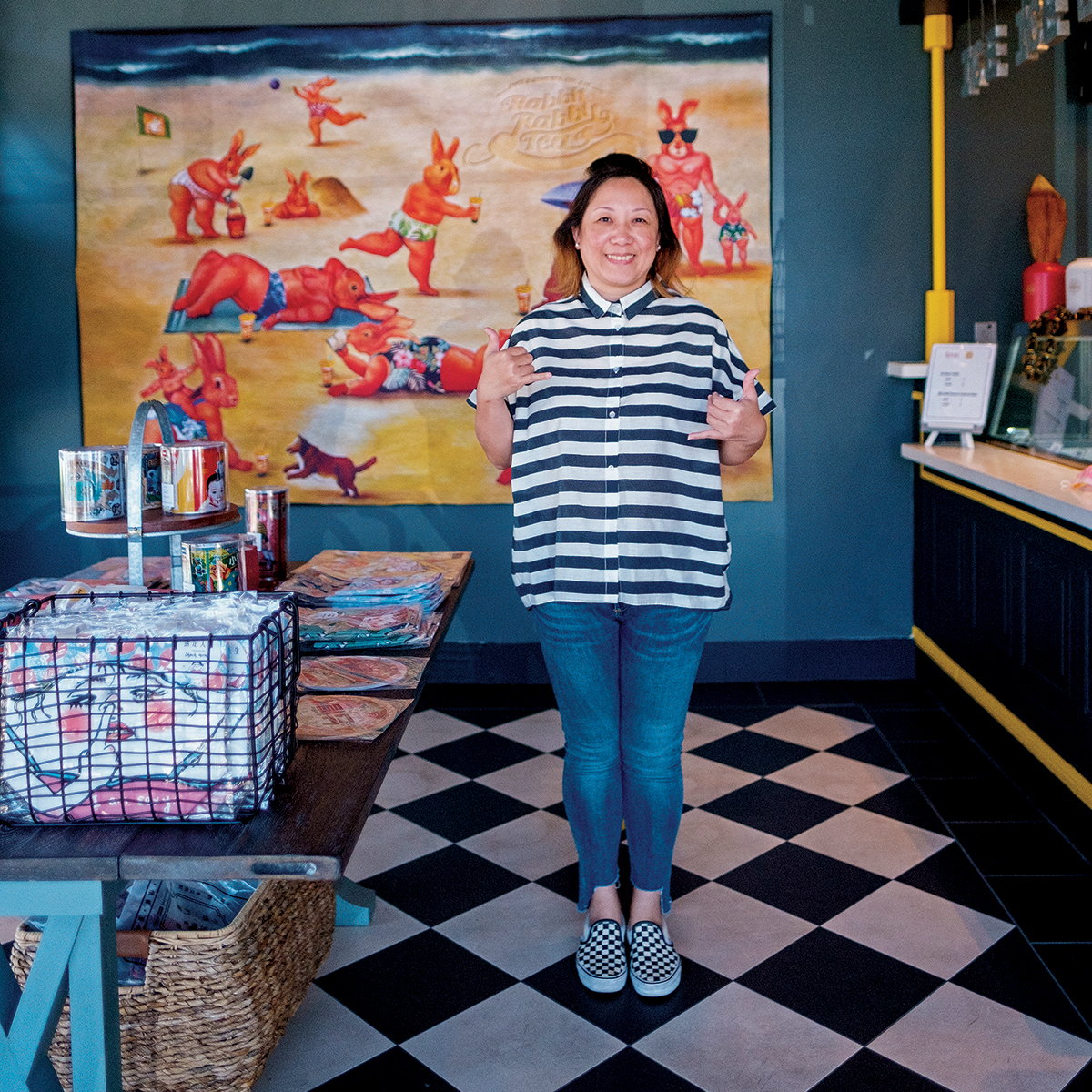 And so, whether intentionally or not, of all the boba tea shops I’ve frequented, Rabbit Rabbit’s menu feels the most overwhelming. It doesn’t necessarily have more choices than others, but those choices are as perplexing as a mad tea party. Among the teas alone, there is Mountain Sprout and Japanese buckwheat and Golden Jinxuan oolong, with no descriptions of how they taste (though some notes are on Rabbit Rabbit’s website). The Cloud Smoothies come in flavors of Sunny Day and Cloudy Day. So the only way to know is, like Alice in Wonderland, to try a sip. An iced Assam tea capped with butterscotch foam tastes like a tea latte, the strong black brew tamed by caramel. More delicate is the Rabbit Signature, a sangria of teas, with apple and orange slices floating in a floral and mildly bitter Golden Jinxuan oolong. Like many of the premium boba tea shops, Rabbit Rabbit brews loose leaf tea and cooks boba throughout the day, lest the tapioca’s desired chewiness devolve into mush. The Cloud Smoothies, though, contain no tea at all—they are blended drinks that taste and look artificial, in hues of blue and purple, incongruent in a shop that prides itself on quality teas. 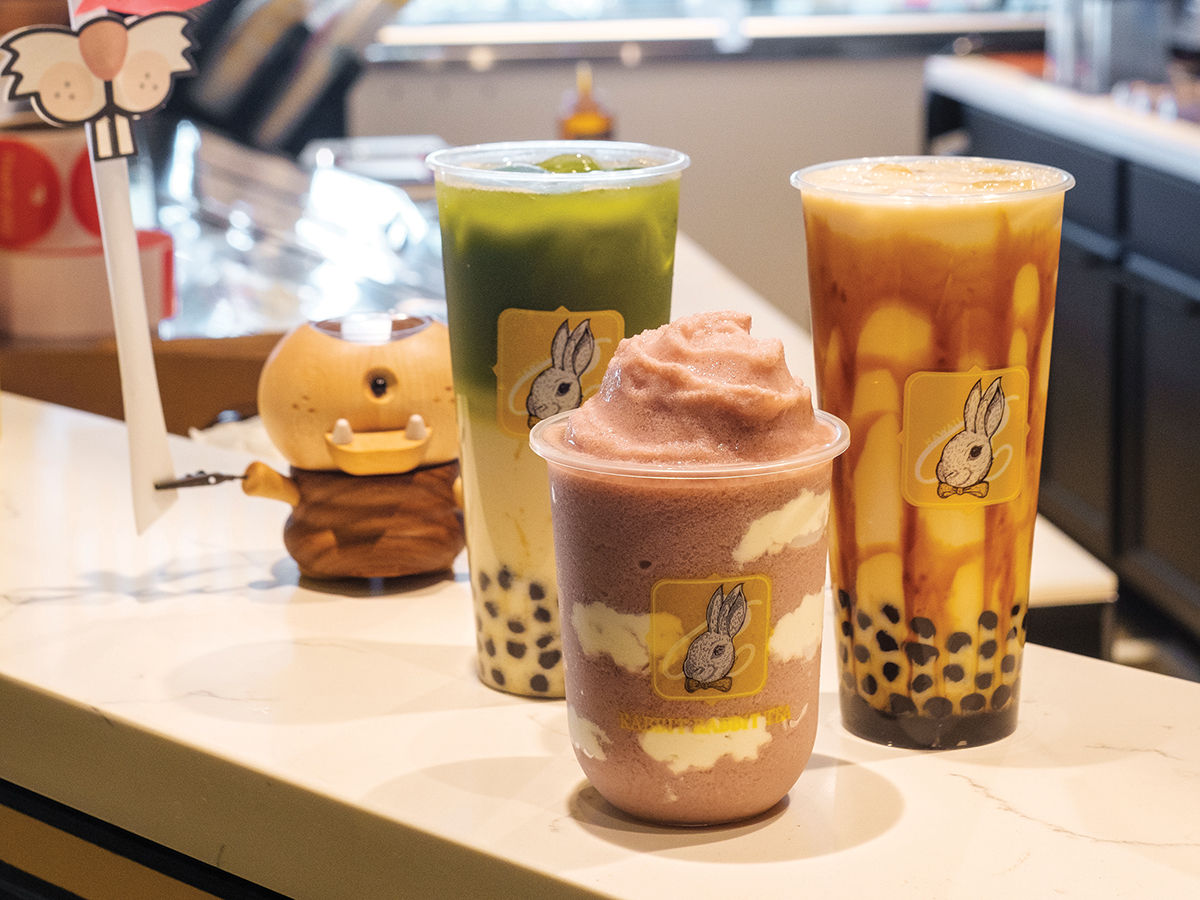 For Chan, the playfulness of Rabbit Rabbit’s menu is a draw. “The boba tea industry in Taiwan is very mature,” she says. “But even though there are a lot of different brands, after you do a little bit of research, you will notice that it’s actually one single company holding four and five different brands. And they are really strict on what you can do. They are very traditional, very conservative. But Rabbit Rabbit is different, [founded] by a young entrepreneur with a very bold style … he gave us a lot of power in terms of how we can run our stores.”

She insisted on tracing the origins of every tea and ingredient she sells, something she attributes to running a Taiwan pharmaceutical company supplying vitamins and medicines to wholesalers there, including Costco. She was born in Taichung, one of the cities that lays claim to inventing pearl milk tea, then attended Kaiser High School when her family moved to Hawai‘i, and college in San Francisco before returning to Taiwan to help run her father-in-law’s business. When her son wanted to enroll at Mid-Pac, she came back to Honolulu more than 20 years after she had left, only to find that the pearl milk tea options had evolved little.

She opened Rabbit Rabbit in ‘Aiea in 2019, and then on King Street near University Avenue in March of last year, just before the pandemic. Both locations have a small marketplace showcasing young Taiwan designers, while the University one also scoops locally made Butterfly Ice Cream, Chan’s way of “merging the different cultural experiences” of the two islands. She still helps with the pharmaceutical company remotely, while running Rabbit Rabbit, its motto “Pick Your Poison.” Not so much Alice of Wonderland, perhaps, but of the everyday and the small escapes from it. 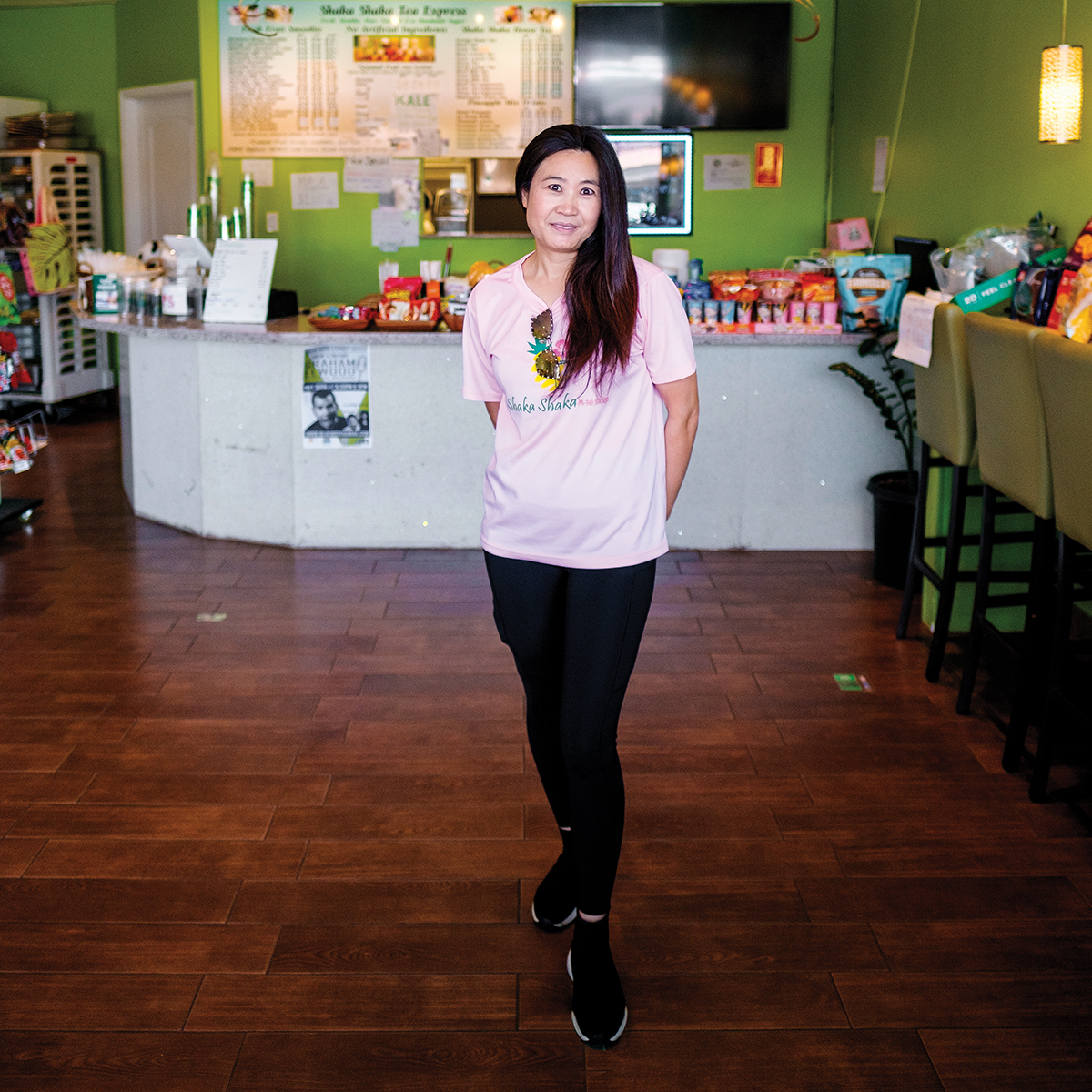 If Rabbit Rabbit’s brand is as loud as the Queen of Hearts, Shaka Shaka’s is the Dormouse.

“What do you want to drink?” Maggie Zhang, the owner, asks me.

“No, what do you want to drink? What do you feel like?” She asks if I have eaten lunch, if I want something light or more filling. She reminds me of a bartender gauging my mood. Or a mom. In the end, she recommends fresh grapefruit juice with green tea and pineapple chunks in lieu of boba. Most local grapefruit is bitter and sour, she says, but this grapefruit grown in Wai‘anae comes from a Taiwan variety that is sweeter. Even so, she insists I sweeten my drink slightly with a syrup Shaka Shaka makes by simmering sugar cane juice overnight.

I’m floored. This unassuming boba tea shop makes its own juices with local fruits including fresh lychee, chico, star apple and dragon fruit; processes almost 1,000 coconuts from Wai‘anae and the North Shore every week to make its coconut jelly; cooks taro for one of its popular drink add-ons; and even makes its own syrup from sugar cane. Zhang says her daughter asked her to open a location in LA, but the water quality, vital in brewing tea, isn’t good enough. This is why I think Shaka Shaka has a marketing problem: Its aesthetic makes it seem interchangeable with boba shops deploying an arsenal of powdered flavorings, but in its from-scratch preparations, Shaka Shaka rivals—and surpasses in scale—the
highest-end craft cocktail bars.

People tell Zhang she must be making a lot of money with four Shaka Shaka locations (in Kalihi, University, Salt Lake and Kāne‘ohe); she says she needs that many locations to make a profit. She streamlines production with one central kitchen that prepares the fresh fruits, produce and syrups to deliver to all the stores.

She opened the first Shaka Shaka in Kalihi in 2013, after her daughter went to college. Her kids loved boba tea since they were in elementary school. “But kids, they cannot tell about the artificial powders and stuff. I talked to my kids: ‘If you guys like, mommy can make it at home for you, but after you go to college, I want to make it for every kid.’”

But she isn’t exactly any mom. Zhang is originally from Canton, China, and one of her best friends had started a chain of Shaka Shaka boba tea shops in Kaohsiung, Taiwan. That friend started a factory that produced everything, from the teas to the boba, but eventually closed the stores. Zhang decided she would give it a try in Hawai‘i.

Her recommendation for me was perfect—Shaka Shaka cold brews its green tea, leaving behind the bitterness and extracting some of its floral and grassy notes that complement the grapefruit juice and pulp. Lightly cooked chunks of fresh pineapple add a sweetness and texture less heavy than boba.

The memory of that drink clings to me as the days turn toward summer, muggy and hot. The pull of it is so strong that a few days later, I turn my video off during a Zoom conference call and sneak into Shaka Shaka for a soursop smoothie—frosty, creamy and tart—with chunks of sweetened taro. Another listless afternoon drives me back for calamansi juice with slips of coconut jelly scraped from the young fruit. There’s nothing wrong with Shaka Shaka’s boba, suffused with brown sugar and cooked to my ideal chewiness, but it’s those other toppings that shake me out of my stupor—buoyantly refreshing and hinting at an infinite world beyond boba.