From a surfing skeleton to a psychedelic toad, the labels definitely stand out from the crowd.

It’s easy to recognize Hana Koa Brewing Co.’s beer cans in grocery stores—look for the labels with bold colors and playful designs, like a Chewbacca with a head of hops drinking a pint, a dinosaur smoking a pipe or a guava-powered cyborg.

Many of these designs are from the minds of marketing director Riley Johnson, who is Hana Koa’s in-house graphic designer, and tattoo artist Xavier Urbano, who has done more than 50 labels for Hana Koa in the past two years. They take turns creating designs for new beers every week—Hana Koa is nothing if not prolific—which includes labels for monthly collaborations with other businesses and nonprofit organizations, as well as internal graphics and merchandise. That’s a pretty high turnover, but “honestly I love it,” Johnson says. “The pace pushes your creativity.”

For each new beer, head brewer Josh Kopp comes up with some descriptors and briefs the team on the concept. “Josh gets super creative with the styles of beer that he chooses to make,” Johnson says. “I can’t even imagine being up in his head.” She and Urbano decide whose style would fit each design better, then they split up the work. Kopp gives the pair a lot of flexibility, and they often work together to help with the name or description. The process usually takes about a month, though this summer they decided to change the concept of one beer at the last minute, to help pay the medical bills of a team member’s daughter who was in a moped accident. Despite the late change, they were able to redo the artwork for Rollin’ With the Homies that day—one of the perks of having a designer on staff.

Since she started working at Hana Koa in July 2021, Johnson has designed 21 cans. “This might be biased because I am a graphic designer, but I know that I buy beer based on the label,” she says. “Initially when I first found out about Hana Koa, right away I was like, oh my God, I’ve never seen cans like these before. No other brewery in Hawai‘i is producing this style of work or beer.”

Here are some of Johnson and Urbano’s favorites: 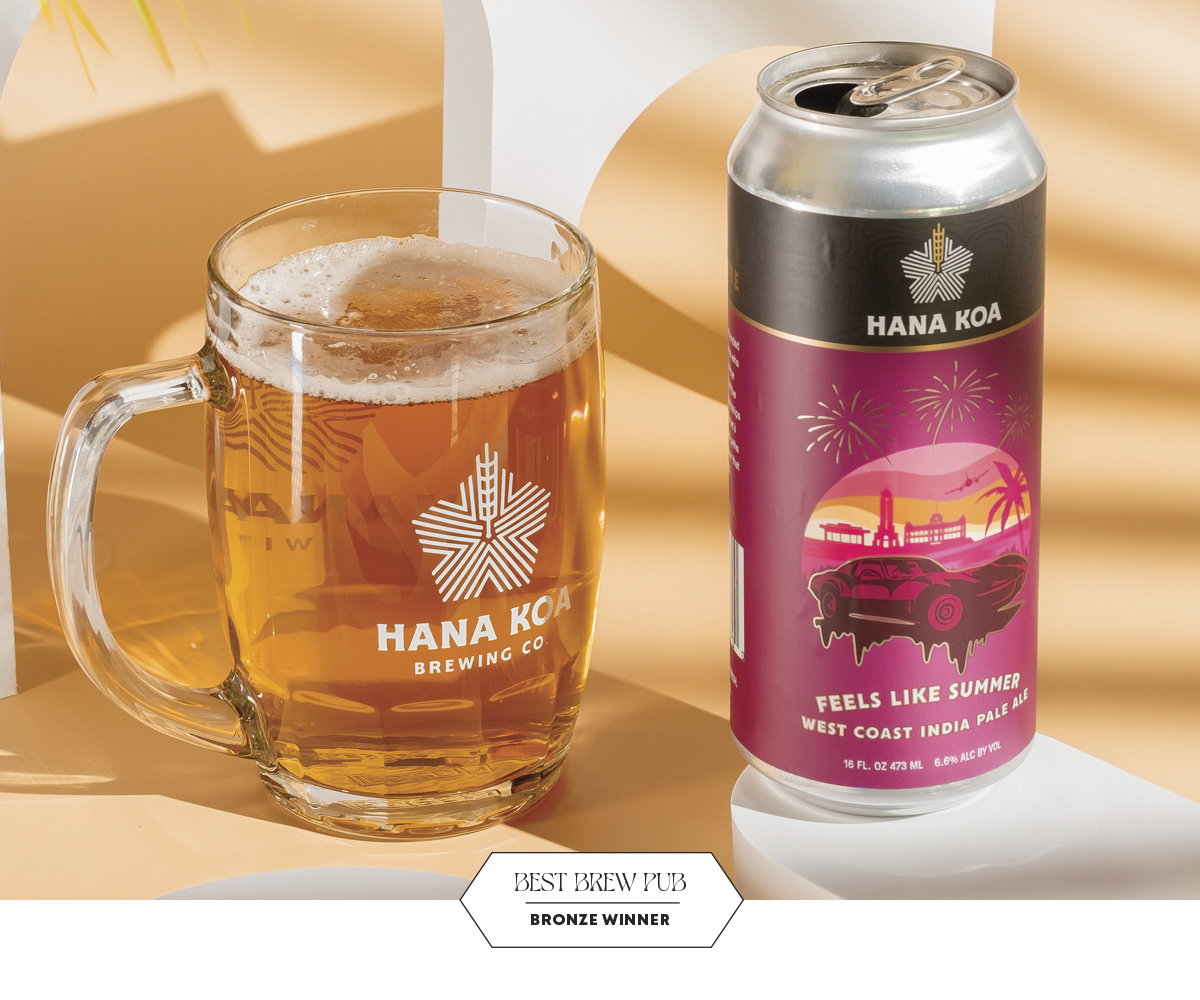 If you look closely, you’ll see images of ‘Iolani Palace and Aloha Tower on the can. “The color scheme and the Corvette melting the pavement represent the heat that summer brings,” says designer Xavier Urbano. 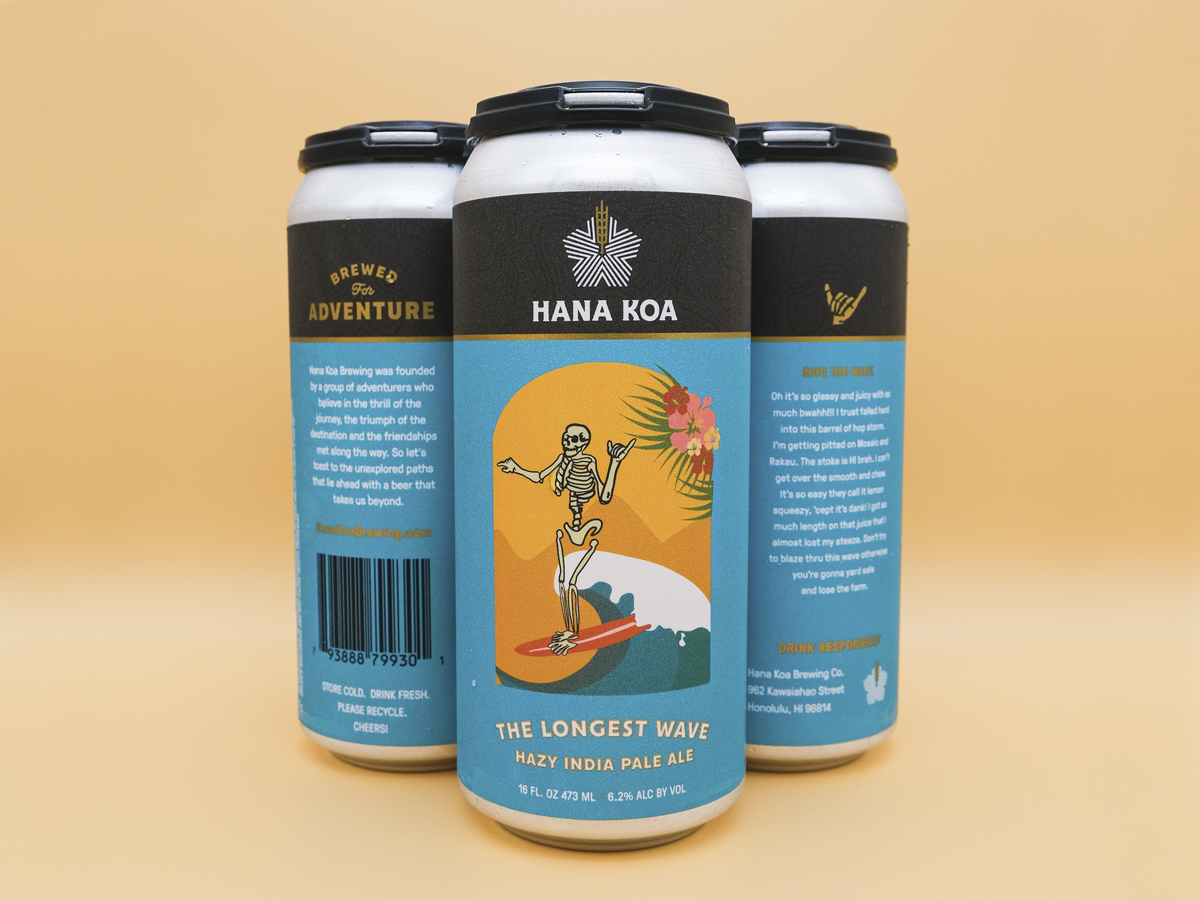 “This is my favorite design I’ve done so far,” says marketing director Riley Johnson. “I really got to lean into my personal style and have fun with it. We were playing with ideas of the skeleton hanging 10 on the ‘longest wave’ for eternity.” 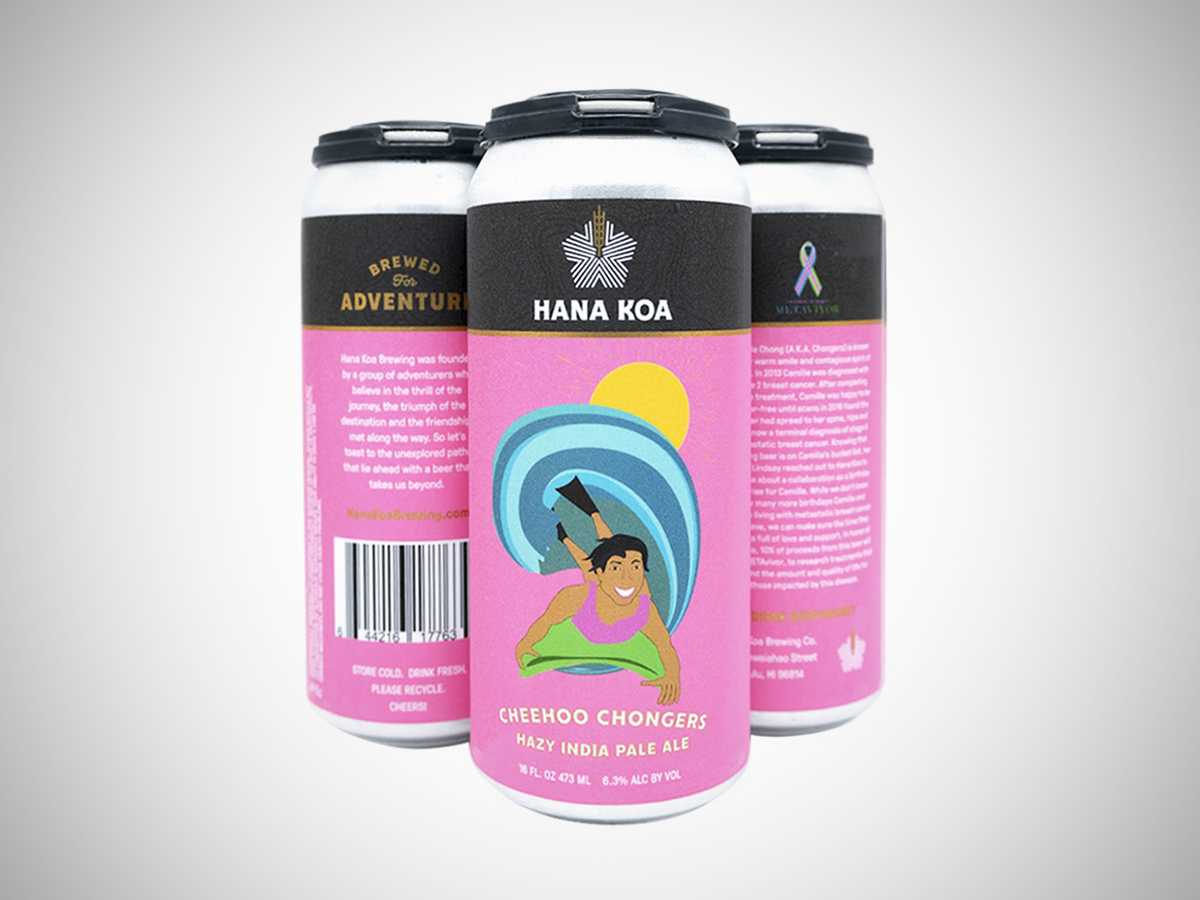 This beer was brewed in honor of Camille Chong, who has been living with Stage 4 metastatic breast cancer for more than five years. “Brewing her own beer was on Camille’s bucket list,” Johnson says. A portion of proceeds went to the nonprofit cancer research organization Metavivor. 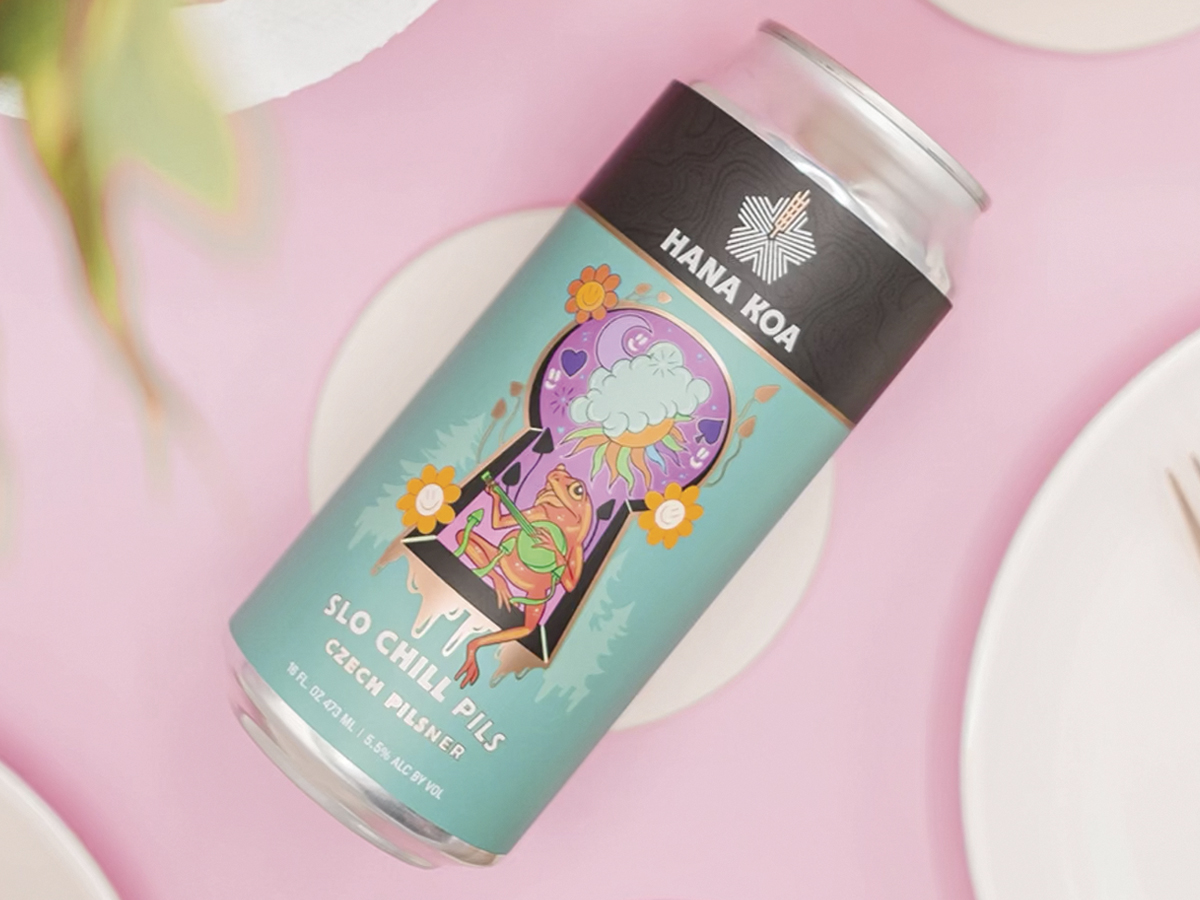 “With this design I wanted to make it so that anyone who looked at the can long enough would have a glimpse of what it’s like to have that psychedelic feeling,” Urbano says. “The toad and the mushrooms guide you into your slow and chill journey.” 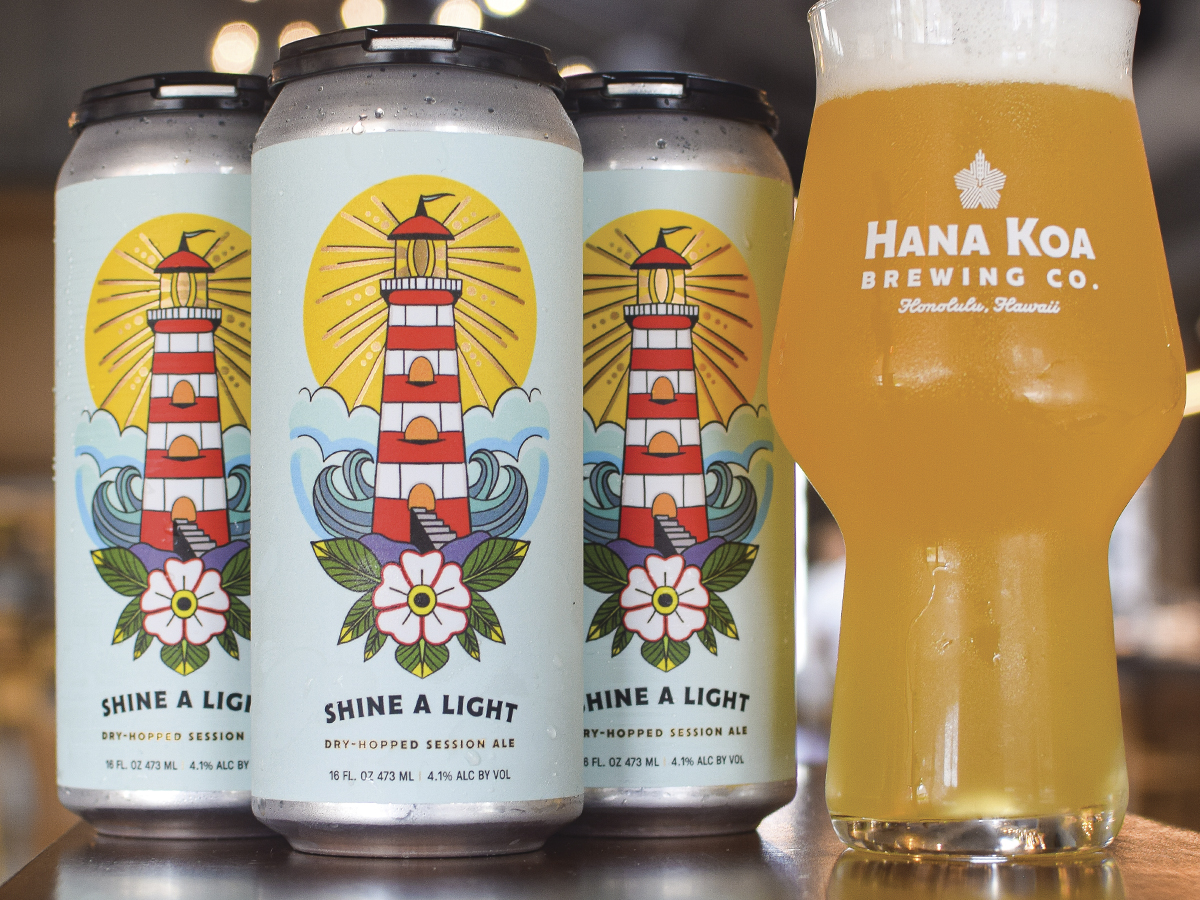 “I created this design with creative direction from Chrissie [Kopp, director of operations]. She wanted to represent a beacon of hope for the victims of sexual harassment and misconduct,” Urbano says. “The simplicity of the design represents my traditional tattoo background.” 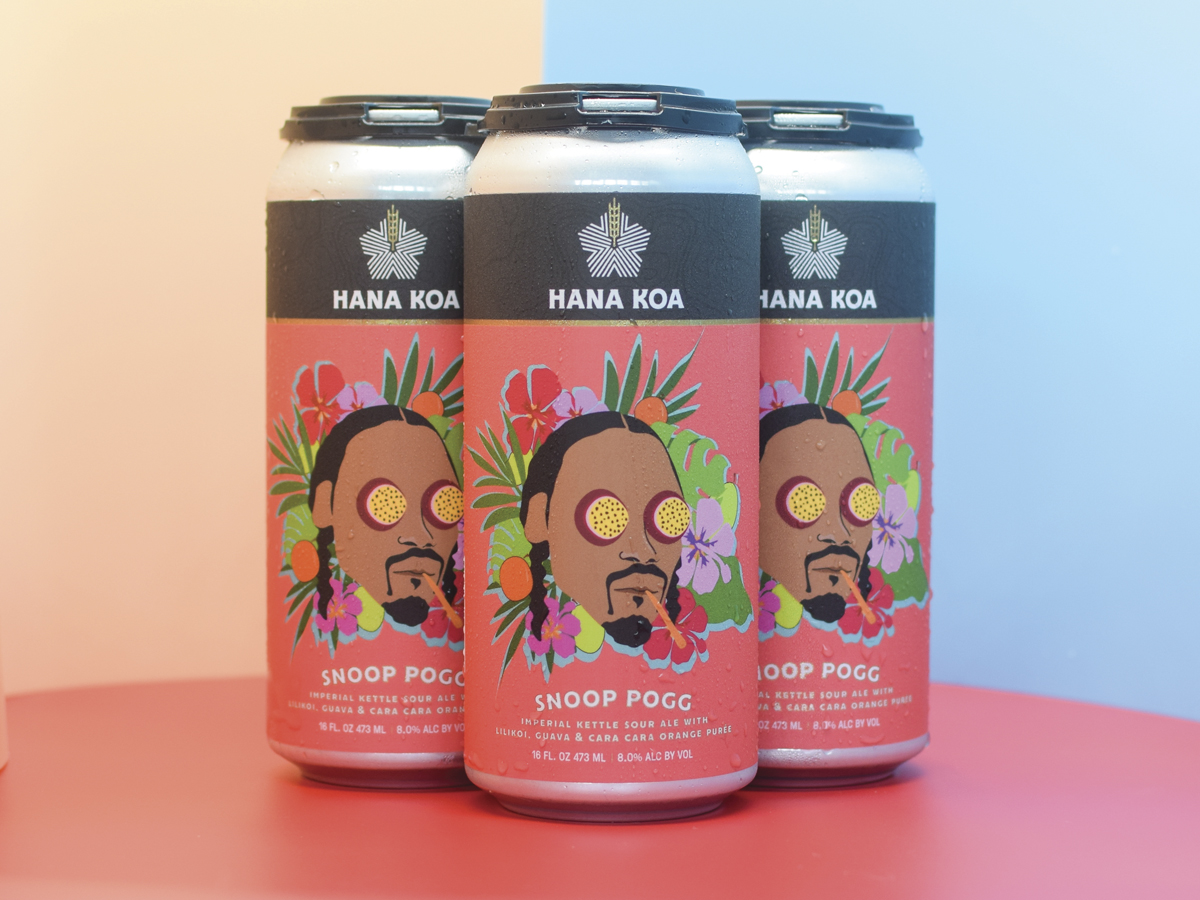 “We came up with the name last year and were waiting for the perfect time,” Johnson says. “The design pulls on passionfruit-orange-guava illustrations with the infamous Snoop smoking an orange peel.”