Nae Ogawa, chef of the gold-winning restaurant, shares her deep love for the natural world in her cuisine. 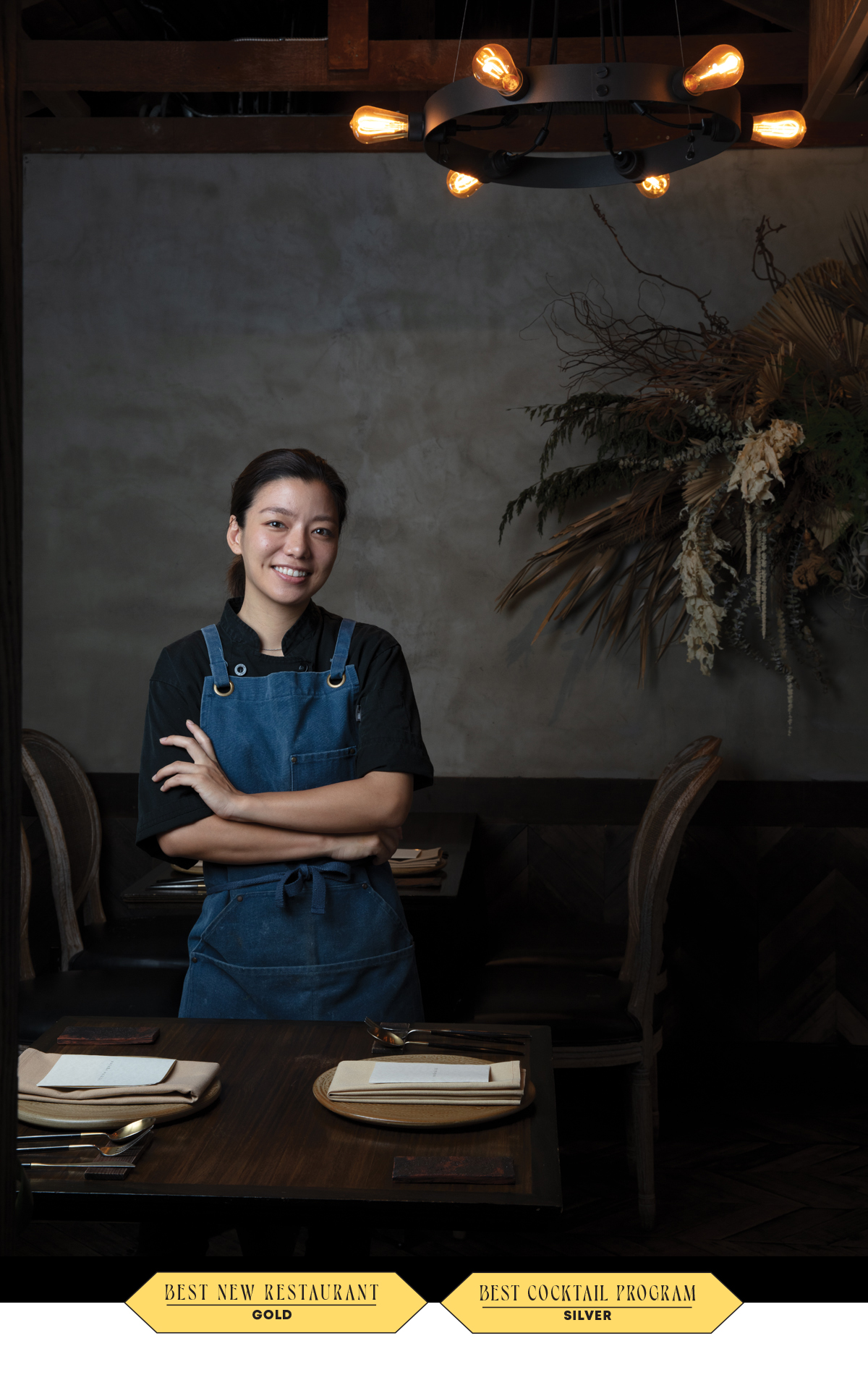 On a recent evening at Nature Waikīkī, a Red Bull salesman sits at the bar, waiting for an audience with the manager. He offers to bring a case of the energy drink for Nature to sell or supply to its employees. The manager, Yoshiaki Kuno, politely declines. We’re not that kind of restaurant, he says. The salesman leaves, and Kuno and the bartender, Jacob Cedeno, share a laugh before Kuno returns to the 10-seat chef’s table to serve a tasting menu centered on local ingredients, and Cedeno continues mixing his original cocktails and brewing māmaki tea for a nonalcoholic pairing.

“I want to save nature,” says Nae Ogawa, the 30-year-old chef of Nature (stylized as NatuRe and pronounced the French way).Before the pandemic hit, she had been the sous chef at Paris.Hawai‘i, where Nature is now. “I had time to think about what I want, and Hawai‘i told me the important thing is being in nature or connecting with nature. I want to save it.” English is Ogawa’s second language, and I wonder if the direct simplicity of her words is a result of that. But her earnestness is palpable. It shows on the QR-code accessed menu, the only one I’ve ever seen that in addition to menu descriptions, like a crispy ta‘ape with a pomelo and olive tapenade, dusted with moringa powder, includes links to research and magazine articles—in this case, on the invasive bluestripe snapper.

“I wanted to have that experience as a chef, to kill an animal. It was hard. It was so sad. But that’s the part of eating meat.”

All the dishes in her tasting menus, and most of the à la carte items, feature locally grown ingredients, from a tofu made with mac nuts to a Small Kine Farm portobello lau lau pithivier—a pastry crust encasing a slab of portobello mushroom and stuffing made of taro leaves and more mushrooms. “Focusing on local ingredients is important, but I also want to work with farmers who care about the land,” Ogawa says. “I want to be beyond farm to table.” That means using local venison and buying whole cows from Mahiki Ranch in Waimea on Hawai‘i Island, and including links in the menu that point to Mahiki Ranch’s pasture management practices and the destructiveness of invasive deer. She’s always on the hunt for new ingredients. When we talk, she’s excited about the advent of mountain apple season and her first shipment of rabbit from Pu‘u Pale farm in Waimea that she’ll make into a galantine. And sometimes, that hunt is literal, as in when she tracked and killed a deer. “I wanted to have that experience as a chef, to kill an animal. It was hard. It was so sad. But that’s the part of eating meat.”

Ogawa has worked in internationally lauded kitchens for more than a decade, starting at Narisawa in Tokyo, and later at Bouley (now closed) in New York, and La Bourse et La Vie in Paris, before coming to Honolulu five years ago to cook at Paris.Hawai‘i. At Narisawa, she learned discipline in the form of 18-hour days and strict instructions on how to cut ingredients, how to clean, how to organize. “It was like a machine,” she says of cooking in the Tokyo kitchen. While in New York, “it was more like art. Chef brought in all the ingredients and put everything on the table and said, ‘Go.’” And then at the classic bistro La Bourse et La Vie, it was just her and the head chef in the kitchen, and he “allowed me to do everything that I want.” In Nature, she has melded all those experiences, along with a deep love for the natural world (“If I tried to make a menu in the kitchen, I can’t, I don’t have any idea, but if I go on a hike or the ocean or the farm, I always get inspired”) into a modern French menu executed with exacting technique. 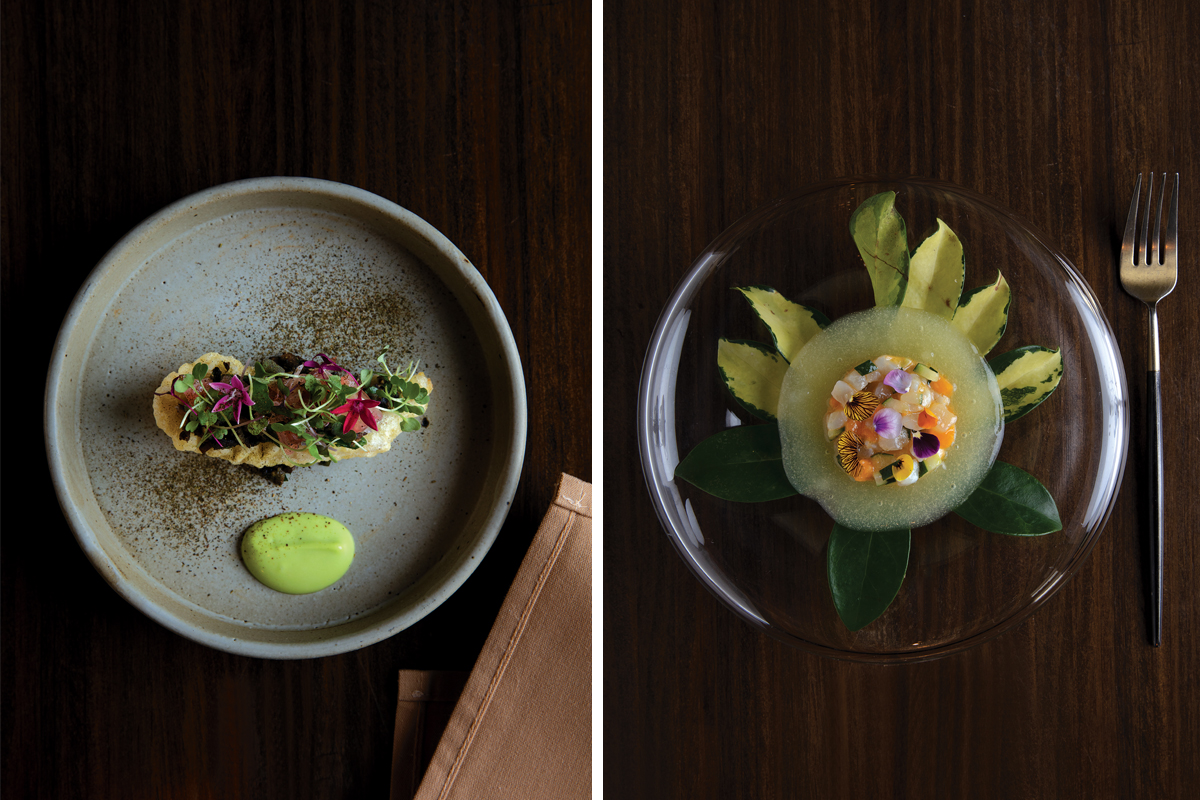 Left: Crispy ta‘ape with a pomelo and olive tapenade and dusting of moringa powder. Right: A tomato and cucumber gazpacho with shio koji and served with kiawe-smoked marlin tartare. Photos: Olivier Koning

She is also a trailblazer—the first female executive chef at any of Zetton Hawai‘i’s six restaurants, which include Zigu downstairs. (Zetton Hawai‘i is part of a Tokyo-based restaurant group with more than 70 restaurants primarily in Japan.) She says she has always worked under male chefs who perpetuated a culture of machismo. They would tell her, “You gotta carry all this, otherwise you cannot work,” she says. “But I can cook. So I had a dream that one day, if I become a chef, I would change that kitchen culture.” At Nature, half the cooks are women, and “we help each other carry heavy things. There’s a way to work together.”

Whether talking about the natural environment or that of the kitchen, Ogawa says, “I see the situation and find the problem. And I want to fix it as a restaurant or as a chef.” That is her mission, spoken plainly, in the middle of Waikīkī, surrounded by concrete and restaurants more likely fueled by Red Bulls than ideals. But Nature sits in what’s considered the finest surviving example of a prewar garden court apartment in Waikīkī. Built in 1939, the interior, over time, had been plastered over with garish orange walls and housed a nail salon and scooter rentals. But Zetton lovingly restored the two-story walkup’s original charm, and now the stair railings are entwined with liliko‘i vines and the dining room is a respite, whether you’re overlooking the courtyard or the streets of Waikīkī—evidence perhaps that some things can be saved.

This category is one of the most significant among the Hale ‘Aina Awards, since restaurants are only eligible once, within their first year of opening. Here are this year’s silver, bronze and finalist winners chosen by our readers. 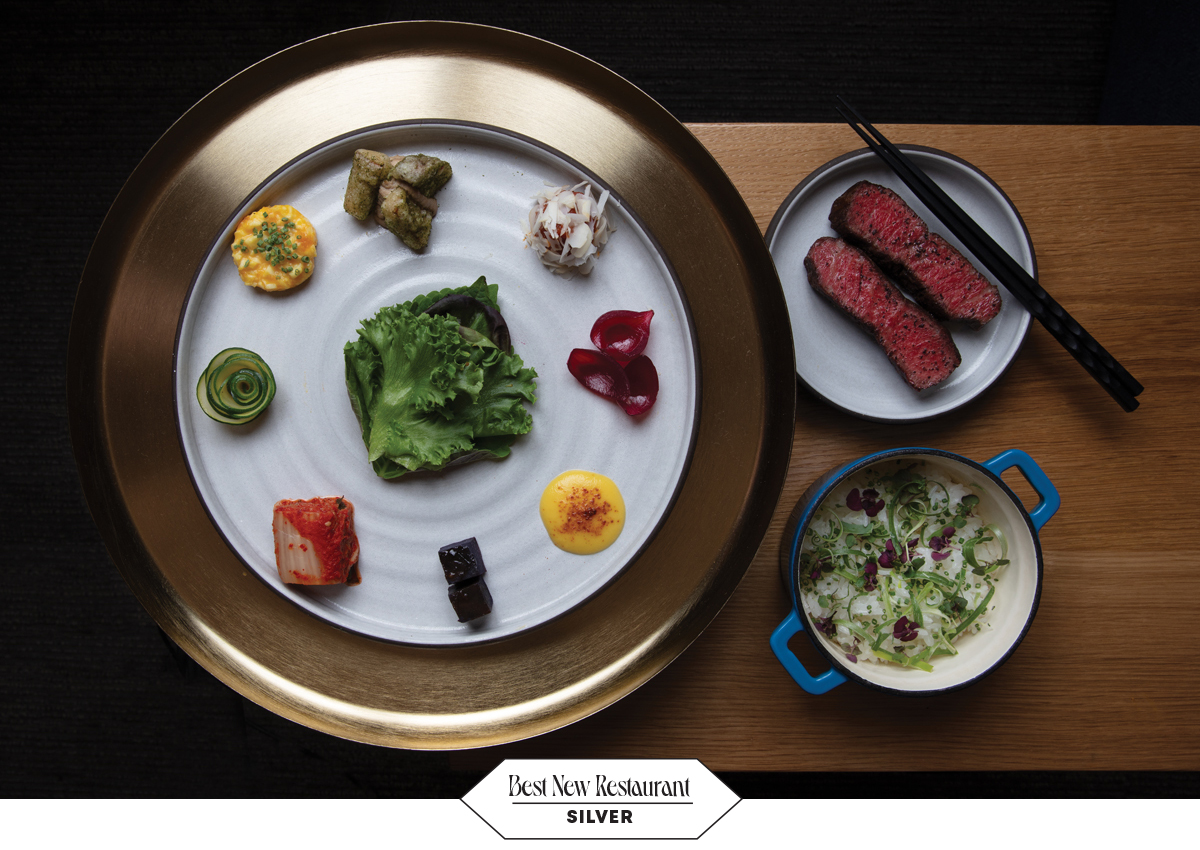 It’s all about the details.

With Bar Leather Apron, Justin Park and Tom Park proved they could imbue a tiny, unassuming space with sophistication while serving Hawai‘i’s best cocktails. With the equally compact Bar Maze, they raised the bar even higher by enlisting chef Ki Chung, formerly the chef de cuisine of Michelin-starred Aubergine in Carmel, California, to collaborate with Justin Park on a cocktail-paired menu. The ever-evolving omakase often evokes the ocean—recently, with coins of raw, thinly sliced Hokkaido scallops, made tart with calamansi and green apple and paired with a light cocktail of shochu, mango, elderflower and a citrusy froth reminiscent of sea foam. At Bar Maze, every detail is obsessed over, down to the salt that Chung uses in his all-local banchan that accompany the meat course  (pictured above)—the flaky grains made by evaporating seawater collected via a surfboard paddled out from the east side of O‘ahu.

SEE ALSO: These Two Bars Deliver Some of Honolulu’s Most Luxurious and Creative Experiences 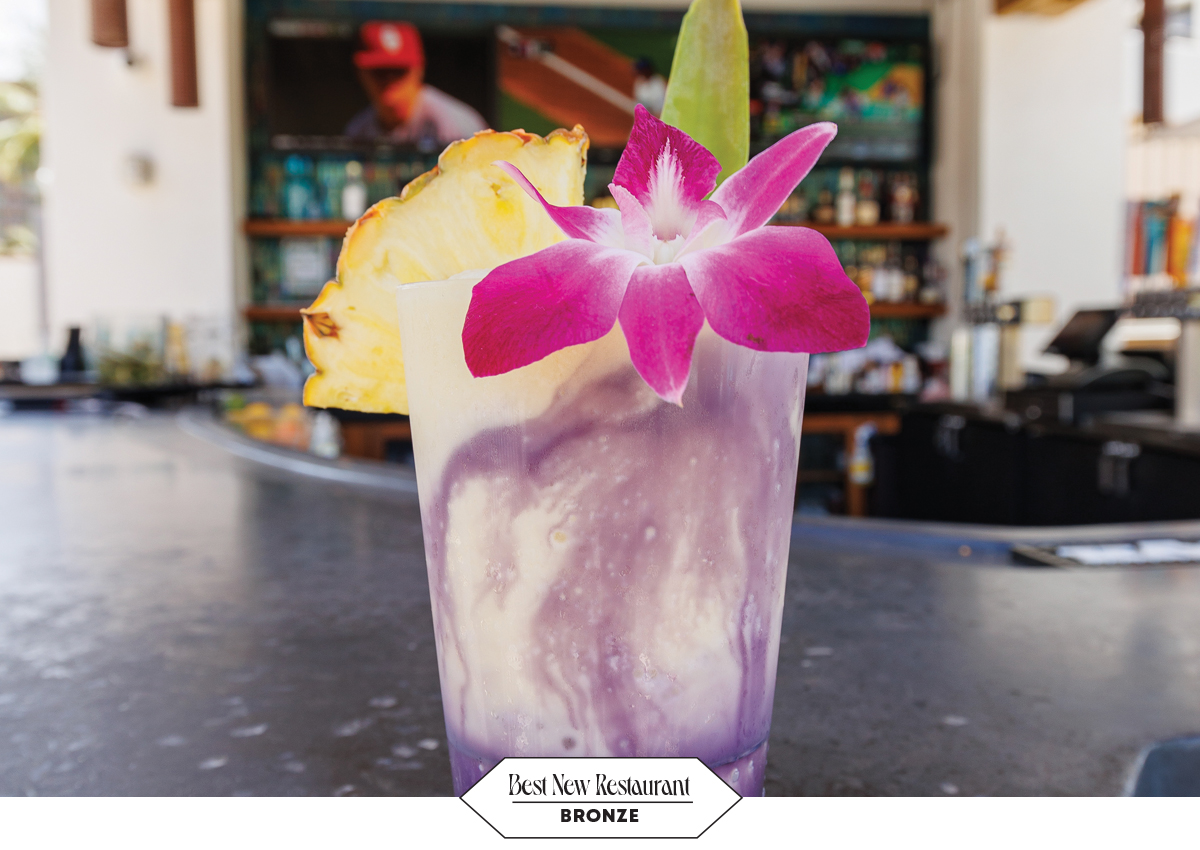 Drinks with a view.

An eclectic menu, locally sourced cocktails and a chill open-air vibe on a 1-acre pool deck across the street from Kūhiō Beach: Queensbreak debuted last fall as part of an $80 million refurbishment of the Waikīkī Beach Marriott Resort & Spa. Best part: glimpses of peachy-pink sunsets silhouetting coconut palms as you sip on a cocktail. Most fun: the names of those cocktails—like Golden Hour, Anotha One, and Ooh Bae (yes, it’s made with ube, pictured above)—and their use of locally made spirits and ingredients including Kula Rum, Ko‘olau Distillery’s Old Pali Road Whiskey and ‘ōhi‘a honey. —Mari Taketa 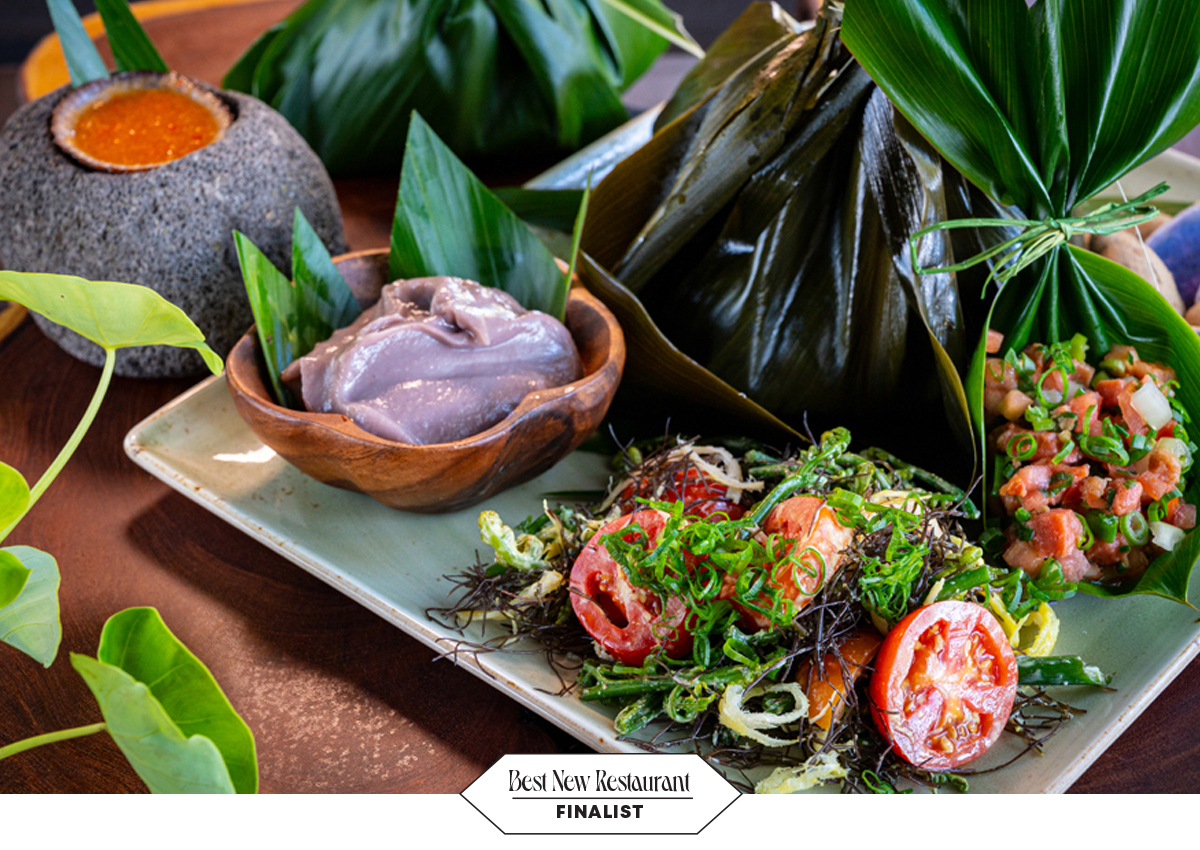 Guided by the ‘āina.

The Kā‘anapali Beach Hotel unveiled a $75 million property-wide renovation in 2021, and with it a new signature restaurant helmed by longtime local chef and former pro surfer Tom Muromoto. Huihui offers a modern take on classic Hawaiian food using Hawai‘i-grown ingredients. Standouts include poke with wok-seared smoked wild venison culled from Moloka‘i with pickled ogo, onions and Hawaiian chile pepper; fish lāwalu, a traditional dish of local fish wrapped in banana leaves and grilled; and the Chef’s Laulau (pictured above) made with local pork and served with lomi salmon, fresh poi, steamed Moloka‘i sweet potatoes, and a pohole (fiddlehead fern) and ogo salad. The oceanfront restaurant—its name means “constellation” and its décor pays homage to the Hawaiian tradition of voyaging—boasts an inventive cocktail menu, too, focused on Hawai‘i spirits and ingredients, including an Old Fashioned made with māmaki tea. —Catherine Toth Fox

Roll With It: Peruvian Street Food from El Gallo in Kaka‘ako