But are they worth the price tag? 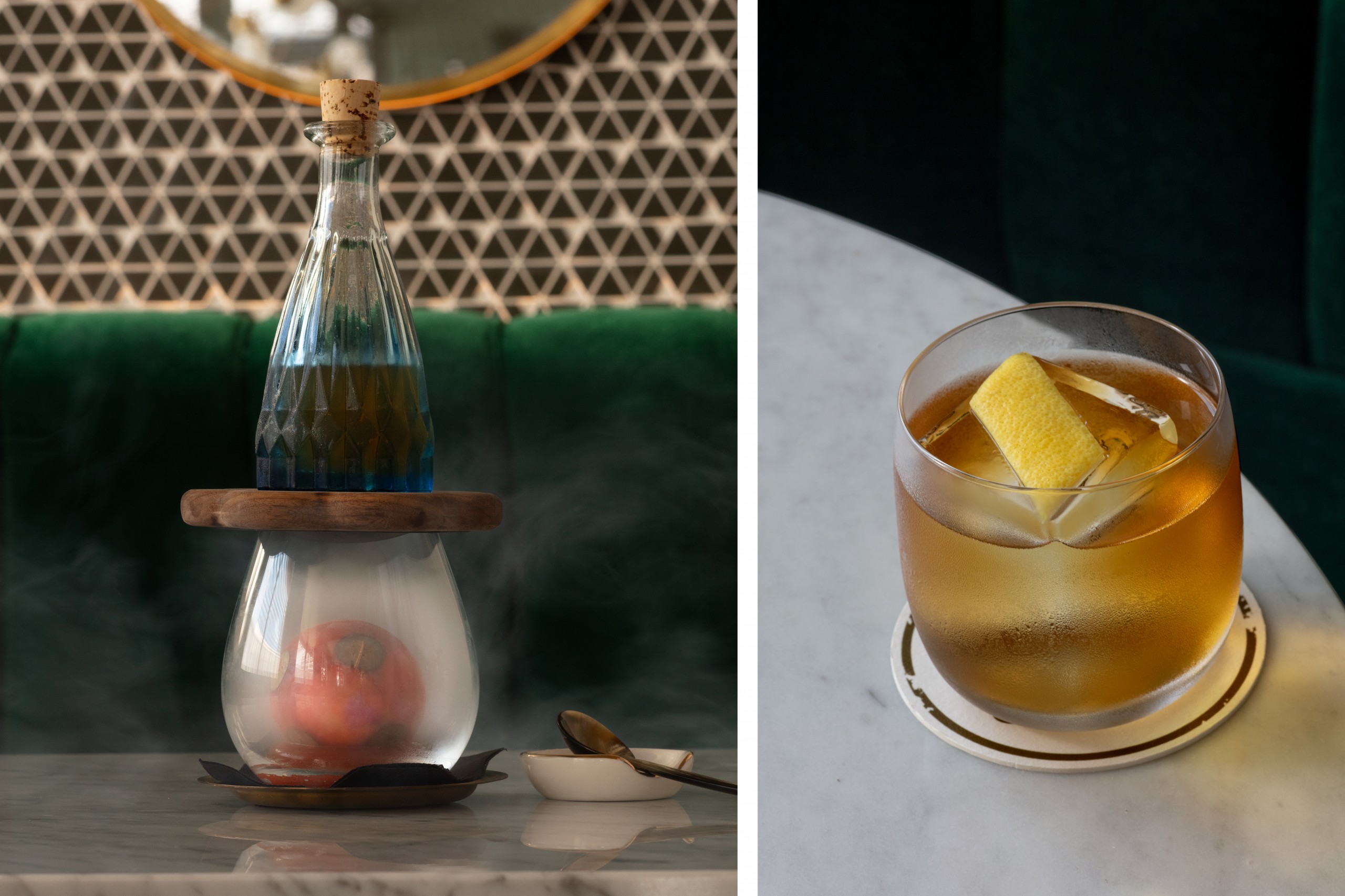 The Freddie 2.0, a $30 drink at Podmore. At right, the Bijou, with gin, green Chartreuse and sweet vermouth. Photo: Olivier Koning

In November 2018, within days of each other, two bars announced their forthcoming debuts. Both would be built from scratch—one anchoring the ground floor of a historic building, the other a sliver carved out of a new condo development. One would evoke a swanky London, the other a secretive Japan.

They were our town’s most anticipated bars, the sophomore endeavors of some of our most lauded restaurateurs locally and nationally: husband-and-wife Anthony Rush and Katherine Nomura of Senia, and Tom and Justin Park, no relation, of Bar Leather Apron.

It took three years for them to open. In that time the world changed. In that time, they dealt with messy breakups from the same business partner. When both bars finally released reservations last summer, it was during Hawai‘i’s worst COVID-19 surge.

I went to both the month they opened—August—but warily. On one hand, I was excited to go to a bar with friends, to drink creations by some of Honolulu’s most imaginative minds. On the other, I wondered, what did it mean to go to a place that was conceived before the pandemic, that plowed through to open without outdoor seating and with labor intensive dishes and drinks in a time when labor was scarce? And $30 drinks and $125 omakase? Was it a triumph of spirit or was it triviality? In the beginning, we thought COVID-19 would change everything. In the end, did it change nothing?

Clearly, the pandemic had given me a lot of time for existential questioning, even more than usual. I needed a drink. So I went. 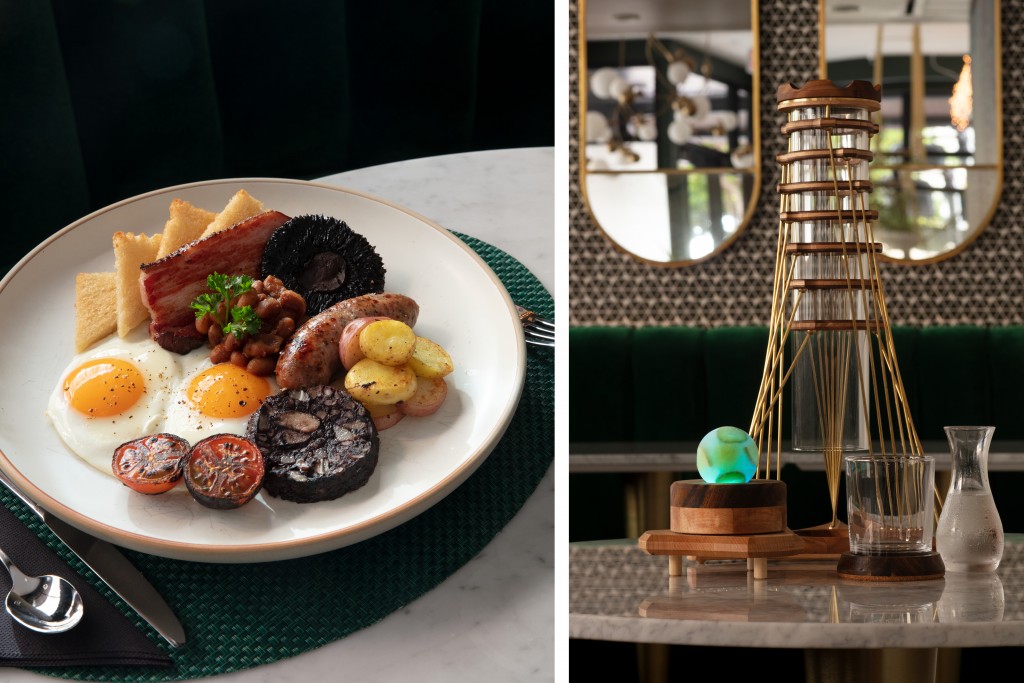 During the day, Podmore serves brunch in a setting that’s brighter and slightly more casual, but still swanky. Highlights include the English breakfast with house-made blood sausage and bacon. At right, the gin and tonic travels through this contraption before cracking apart in the glass. Photos: Olivier Koning

“It’s so sensual here,” whispers my friend when the lid lifts from our potato salad. Likely, no potato salad has ever prompted that sentiment. And yet here we are, in the embrace of an emerald green velvet banquette, as wisps of smoke curl toward us like incense from a shallow wooden bowl. Just a potato salad! And yet, it isn’t: Among perfectly roasted potatoes are thyme-scented crispy gnocchi, pickled red onions and cornichons, to be dipped in a pot of melted Parmesan, Gouda and cheddar, like an intimate, mini fondue.

This is the paradox of Podmore. There is a gin and tonic that is just a gin and tonic, as it says so plainly on the menu. But it is $30. My friend is confused. Gin and tonics are her favorite drink. She parses the description as if there were a secret message written between Hendrick’s gin and Fever Tree tonic. I had ordered it the first time I went to Podmore, a few months ago, and I tell her the presentation is unlike anything she’s ever seen. I don’t tell her about the disco ball ice, the sculpture that looks like it  could double as a torture device. “But what does it taste like?” she asks. Like a gin and tonic, I admit. She shrugs and orders the Bijou ($16), with gin, green Chartreuse and sweet vermouth, the combination calling to mind a green meadow dotted with lavender. She feels no FOMO about the gin and tonic. My drink, the Friendship Tattoo ($18), is darker—with Pasote Blanco tequila made with rainwater and the smoky and woodsy amaro Sfumato, softened with other liqueurs. It is possible to have two different cocktail experiences at Podmore, and it’s the one on this second visit—quiet and understated and, yes, sexy—that I prefer.

When Podmore first opened, my companions and I went for the showier drinks, including our favorite, The Chung Chow ($30), a riff on a Pimm’s cup with multicolor boba-sized ice in flavors of cucumber, mint, and strawberry, orange and lemon—fizzy and fun and sunshine in a glass. It’s one of the few items on the menu that’s wildly creative but doesn’t feel too serious. Some of the other drinks, like the Ants on a Log ($25), accompanied by peanut butter spheres and sherry droplets (emulating raisins) on celery, make me long for the childhood version. And then there’s that gin and tonic, one of those experiences I’m happy to have tried once but don’t feel compelled to repeat. 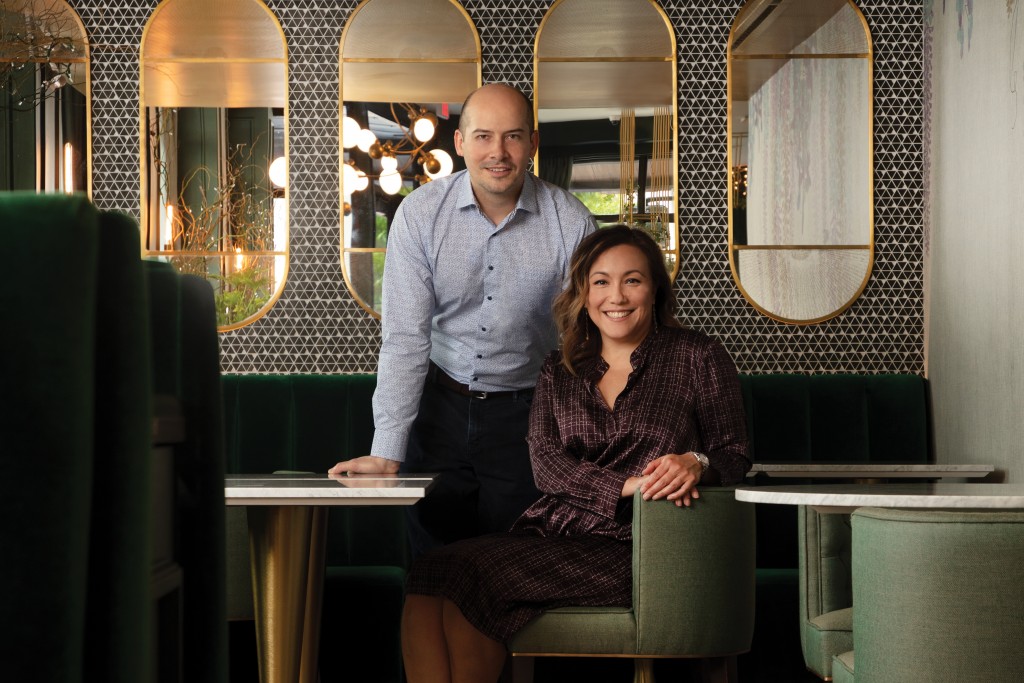 Much of the menu at Podmore is drink and food as art, a stage for Rush’s creative and obsessive mind. (This is the chef who creates Wellingtons that resemble stained glass, the guy who for years, from country to country, carried a paper model of a seven-compartment box, looking for someone who could create the wooden septagon that would unfurl at the end of the tasting menu at Senia.) Food favorites include the foie gras parfait ($28), a clear glass showing off layers of peach compote, velvety foie and a raspberry gelée accompanied by a twee burlap bag of mini Yorkshire puddings. The roasted pork bun ($8) takes the familiar Chinese pork bao and gives it a British Sunday roast supper spin—the fluffy bao made with sage and parsley to emulate the flavors of stuffing, and the ultra tender pork belly and crackling skin accompanied by a smear of applesauce. Rush’s Britishness is sprinkled throughout the menu and comes to the fore in the desserts, as in a sticky toffee pudding ($12), a soft and soothing date cake that arrives warm, topped with vanilla ice cream and drenched in a caramel sauce taken just to the edge of burnt, its dark bitterness and a sprinkle of salt rescuing the dessert from overbearing sweetness. The Eton mess ($12) isn’t a mess in Rush’s hands, but a tidy dessert of whipped cream and strawberries with micro basil adding fresh blasts of herby anise, a splash of gin to keep the sugar in check, and shards of crisp meringue for shifting textures.

SEE ALSO: Brunch at Podmore Is Worthy of a Special Occasion

Rush says he opened Podmore in the style of bars and bar hopping that he and his wife have enjoyed in other cities—bar snacks and drinks in lieu of full meals. He has a higher alcohol tolerance than I do—on my first visit with friends, we ordered half the menu, spent a lot, and were still very hungry (and tipsy). Maybe we’re more of the Spanish and Italian bar-hopping sort, with lower proof drinks and lots of food.

And so on our second visit, fortified with dinner beforehand, we focus less on the food and forgo the spectacle. We enjoy the simpler drinks, still luxurious in their details in ice and glassware, like the brass and mother of pearl accents throughout Podmore’s interior. And then the novelty recedes and gives way to each other’s physical company, what we’ve missed the most. 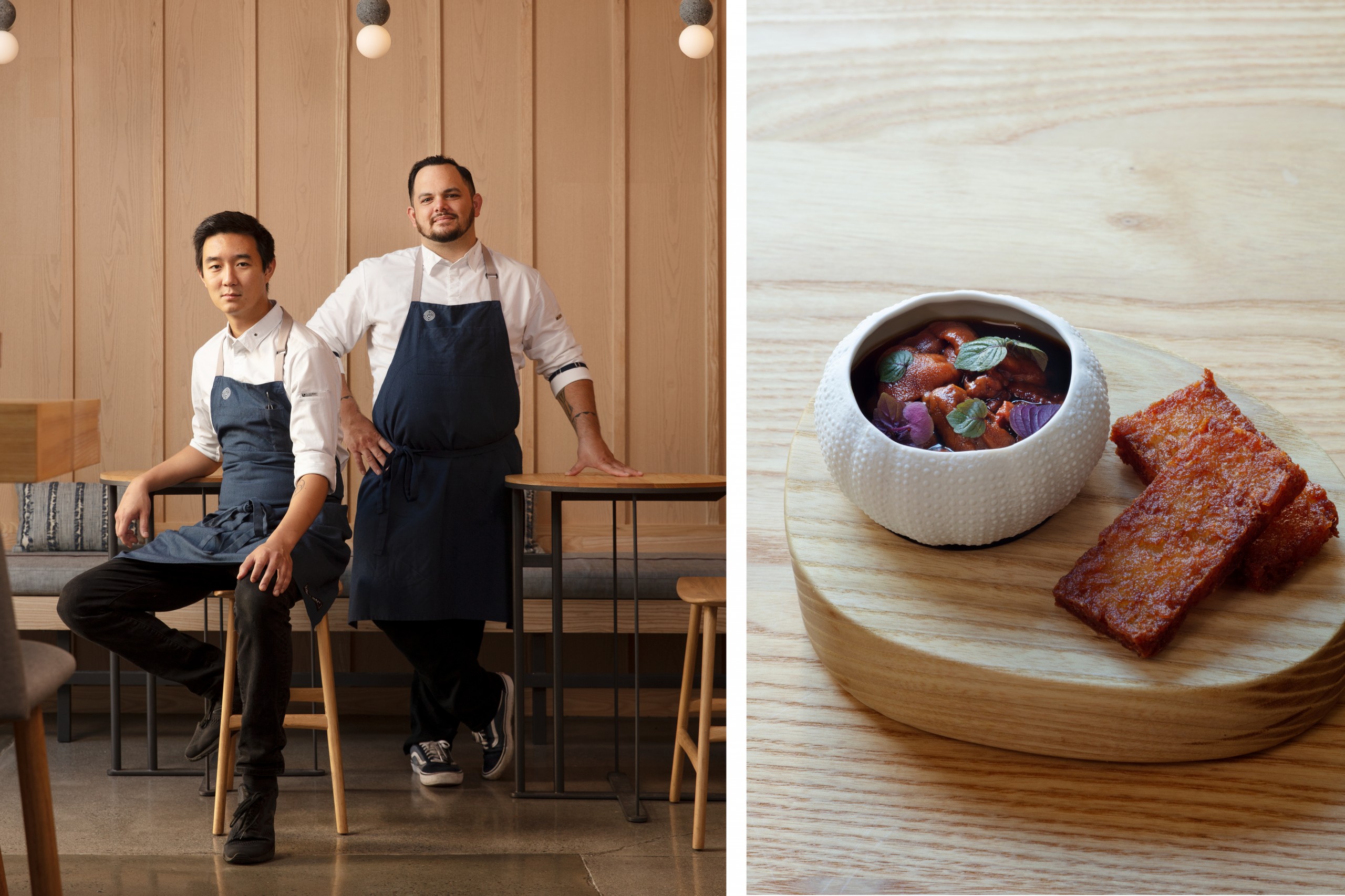 More paradoxes: For their second spot, Justin and Tom Park wanted a place their friends could drop by without a reservation. But Bar Maze has become even harder to get into than Bar Leather Apron. Blame the pandemic for that: Instead of a drop-in standing-room izakaya as originally envisioned, social distancing and capacity limits forced them to open another reservation-only bar. And since they already had a kitchen built—albeit a tiny one—they decided to create a place where the food and drinks would be developed in concert, where the drink would be as much a part of the dish as, say, a ginger scallion sauce on chicken. Justin Park and the chef, Ki Chung, haven’t quite reached the food and drink equivalent of finishing each other’s sentences, but the omakase at Bar Maze (which comes from the Japanese word mazeru, to mix) is still one of the best food and drink pairings in town.

The tall sliver of a space is divided in two: the mezzanine, where drinks and food are ordered à la carte, while downstairs, at the counter and high tops in view of the chefs and bartenders, the five-course omakase dinner ($150) is served. Of the two options, I unexpectedly preferred the omakase—though I usually gravitate toward more casual dining, the à la carte experience lives in limbo between casual and formal.

A recent dinner downstairs began with a quartet of finger food, the sort of pūpū you wish every cocktail party would include: Highlights were a luscious pot of uni and potato cream served with potato croquettes (a ringer for hash browns), and tiny crisp nori chips sandwiching a shiitake jam that’s dark, sweet and mysterious like tsukudani. They’re paired with a fizzy and light cocktail of sake, Champagne and the flavors of kiwi and yuzu. 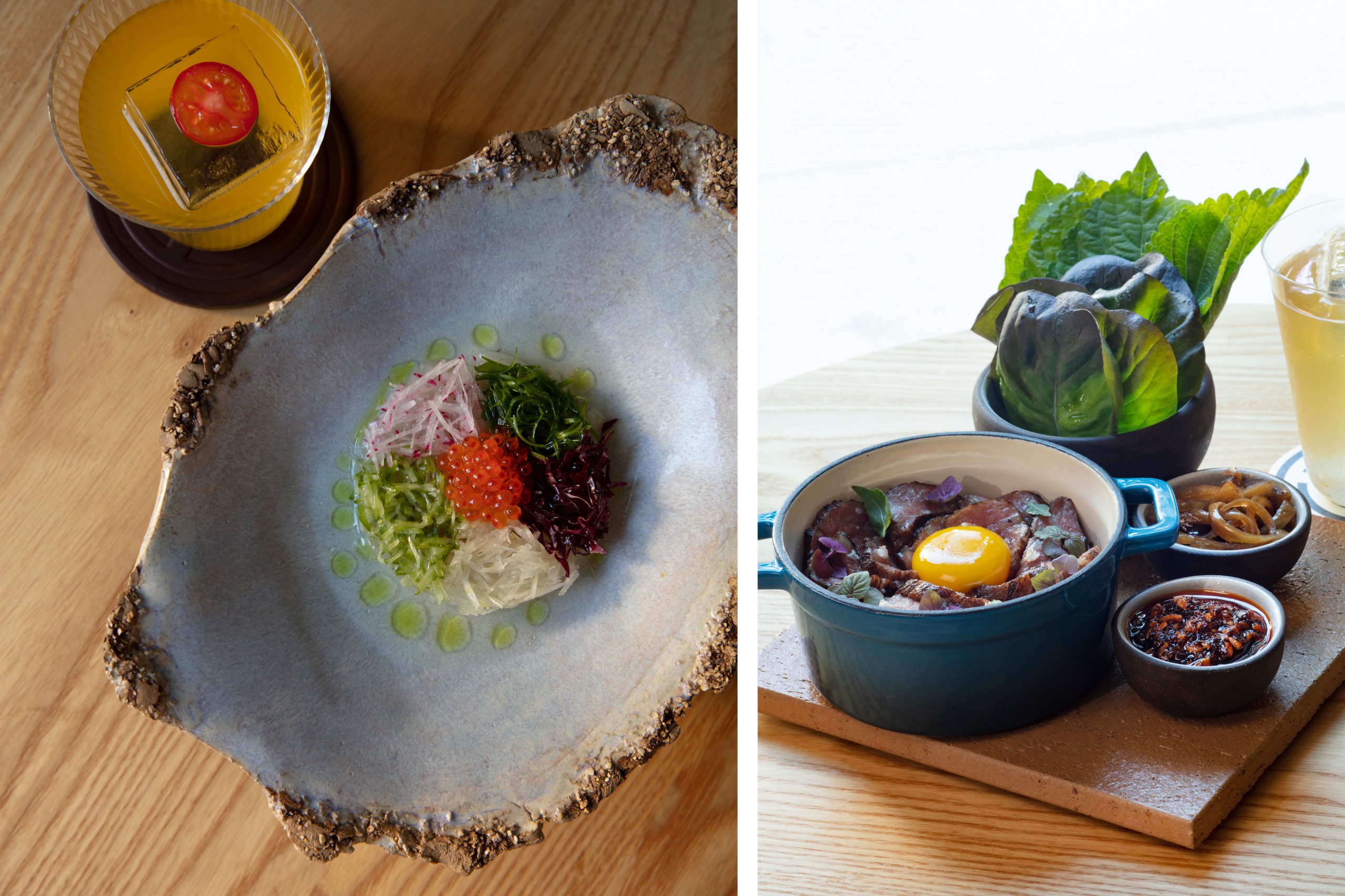 Chung, who previously helmed Michelin-starred Aubergine in Carmel, California, leans into his Korean heritage with a take on naengmyeon, or Korean cold noodles. Kombu-cured kampachi “noodles” are mounded with shards of purple daikon and other vegetables, plus smoked trout roe and a mild white kim chee granita—as refreshing as its inspiration and calling to mind a tartare of the sea, especially in its oyster shell-like vessel shaped by Brooklyn-based ceramicist Nicole Pilar.

Until Bar Maze, I had never had a zero-proof cocktail that rivaled a boozy one. But my dining companion had ordered the nonalcoholic option for her dinner, and in the case of her drink for the kampachi course, I favored abstinence. In lieu of shochu and elderflower liqueur, Justin Park substitutes lychee black tea, providing the astringency of alcohol without the heat, letting the drink’s other delicate flavors of tomato and mango in the glass come through. But even with the alcoholic pairings, Park shows restraint, choosing lighter spirits and creating lower-proof drinks (a rare skill that I appreciated even more a few weeks later when I ended up wasted by the second course of a cocktail-paired dinner).

Chung’s precision and techniques to layer flavor upon flavor especially come through in the steak course, in which flat iron steak (or A5 Miyazaki wagyu for an additional $50) is triple seared—first with salt, then after a rinse in sake and pear juice, and finally after a coating in a tare. Save yourself the money and stick with the flat iron, muscly, robust and beefy—and perfectly paired with a warm vanilla-and-maple scented Old Fashioned. This course arrives like a miniature bo ssam, the Korean pork shoulder accompanied by plenty of fixings, with pristine lettuce to wrap the beef into, and a bowl of maitake rice I’d love to wrap myself into.

The dinners always end with shave ice—ethereally light and doused in cantaloupe syrup when we went.

Justin Park says as the menu changes, he and Chung are working closer together—the first dishes and drinks were developed partly over Zoom while Chung was still in California. Like everyone, they discovered the limits of what can be achieved virtually, and perhaps as the menu evolves, they’ll prove that by physically working together, they’ll get closer to integration and what they originally hoped to achieve.