Field Notes: These Surfers Get Up Before Dawn to Catch the Best Waves 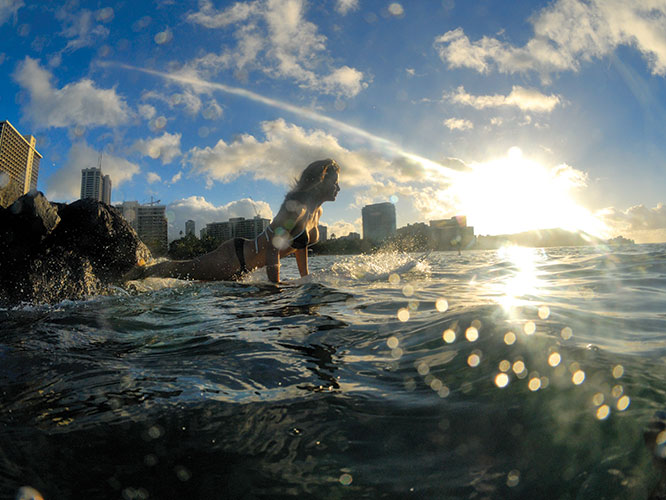 You can surf whenever you want. The ocean never closes. But dawn patrollers live by the mantra, “The early surfer gets the wave.” Or, at the very least, the wave without the midday crowd. You’ll find surfers out before dawn at just about every surf break around O‘ahu, from Mākaha on the West Side to Hau Bush in ‘Ewa to Diamond Head in town. Dawn-patrol surfers often fall into one of three categories: the early-risers who prefer the morning hours, the clock-punchers who need to be somewhere—office, class—at a certain time, and the unemployed or retirees who have nothing better to do at 6 a.m. At Queen’s, the early-morning crew comprises small-business owners, teachers, college students, retired sales managers, an athletics director, a dentist and Waikīkī beach boys who want to catch some waves before starting their shifts.

At Queen’s in Waikīkī, the morning crew arrives before first light, which, in the summer months, is around 5 a.m. Armed with travel mugs filled with hot coffee, they watch the waves—with help from the glow of street lights—for a while before deciding to paddle out. There are about a dozen regulars who venture out this early here—a vastly smaller crowd than later in the day, when Waikīkī surf spots can see hundreds of people, many on rental boards, in the lineup. Surf conditions tend to be better—lighter winds, calmer ocean—in the early hours. But most regulars will point to the camaraderie in the surf as their motivation to get up early and paddle out. “Conditions are typically better in the mornings, and so is the crowd,” says Steve Sahetapy Engel, 39, who’s a regular dawn patroller at Queen’s with his wife, Heather, and their 11-year-old son, Miles. “The morning crew is mellow but very entertaining. Everyone is always poking fun at each other and having a good time.”

Surf etiquette is always the same, no matter where you surf, how skilled you may be or whether the sun’s up: Know your limits, don’t drop in on someone else, sharing is caring, respect the regulars, don’t be a jerk and have fun. The ocean tends to be a bit colder in the morning, especially in the chilly winter months. Box jellyfish, which swarm in nearshore areas in Hawai‘i between eight and 10 days after the full moon, are monthly visitors in Waikīkī, often washing up on the beach by the hundreds, sometimes thousands. And, though the lineup in the early hours isn’t as crowded as at other times of the day, don’t think you’ll be surfing alone, especially in the summer when surf is pumping along south shores. It’s not uncommon to count more than 20 surfers in the lineup before the sun peeks over Diamond Head. “A lot has changed,” says 73-year-old Chuck von Arnswaldt, who’s been surfing here since the ’70s. “The attitude of some of the [newer] surfers coming out has changed, and now we have more tourists and beginners who don’t know the etiquette of being in the lineup … But I like the people, the camaraderie. I rarely come out any other time of the day.” “I enjoy the physical aspect of surfing. It’s what keeps me young.” “Surfing with my family is a great way for us to spend time together at the start of the day before our crazy daily schedule with work and school.” “I love that sense of being on a wave. At our age, it’s much more spiritual now.”

Did you know? The average water temperature in Hawai‘i ranges from 76 degrees in January to 80 in July.