Chill Out with 8 Frozen Treats We Found Around O‘ahu

Local-kine pops, luscious ice creams and gelato and a cold twist on crème brûlée are all from small local businesses.

Summertime! And the living is steamy so we’re prowling for food that cools us off. We’ve rounded up eight frozen treats, a combination of recent discoveries and frosty new items from favorite local businesses.

Since July is National Ice Cream month, we checked with the International Dairy Foods Association and learned that the average American eats roughly 20 pounds—4 gallons—of ice cream each year. And that ice cream companies, most family-owned, churned out more than 1.3 billion gallons of ice cream last year, contributing more than $13 billion to the U.S. economy. So next time you reach for a scoop, know that you’re doing your part. Maybe we can all make an extra effort on National Ice Cream Day on July 17. 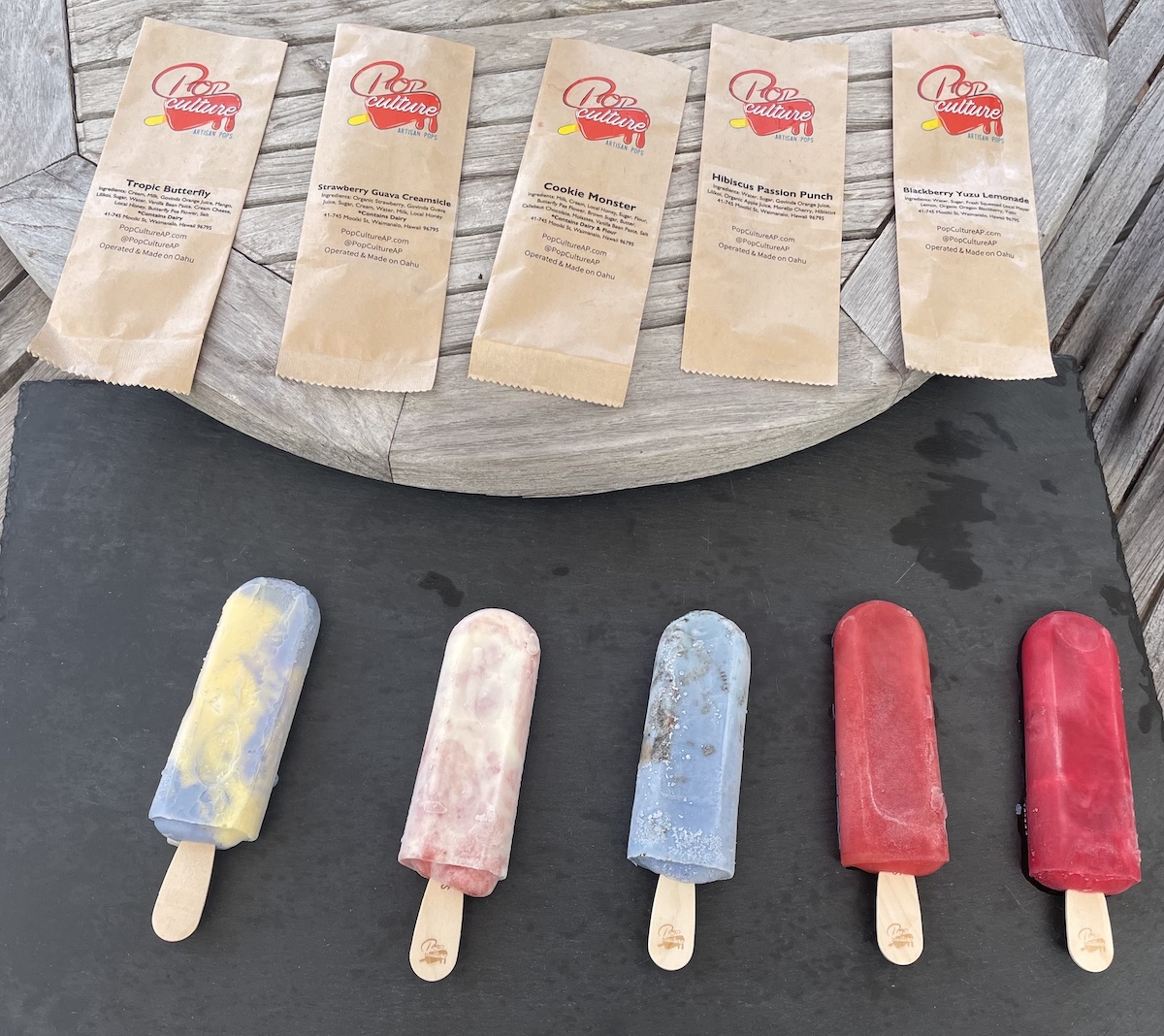 The fun and fresh flavor combinations catch my eye when I first see Pop Culture Artisan Pops at the Kualoa Ranch store: Korean Pear Lemongrass, Strawberry Guava Creamsicle, Tropic Butterfly with mango, liliko‘i, vanilla, honey and butterfly pea flower. And if I’m feeling nostalgic for small-kid time? The Cookie Monster mixes in Oreos. Then at the Sunday Kailua Farmers Market, I try the Whatamelon. It’s probably the prettiest pop with its faux watermelon rind made from matcha and cream, but it’s also perfect for these hot days, managing to taste like fresh watermelon. 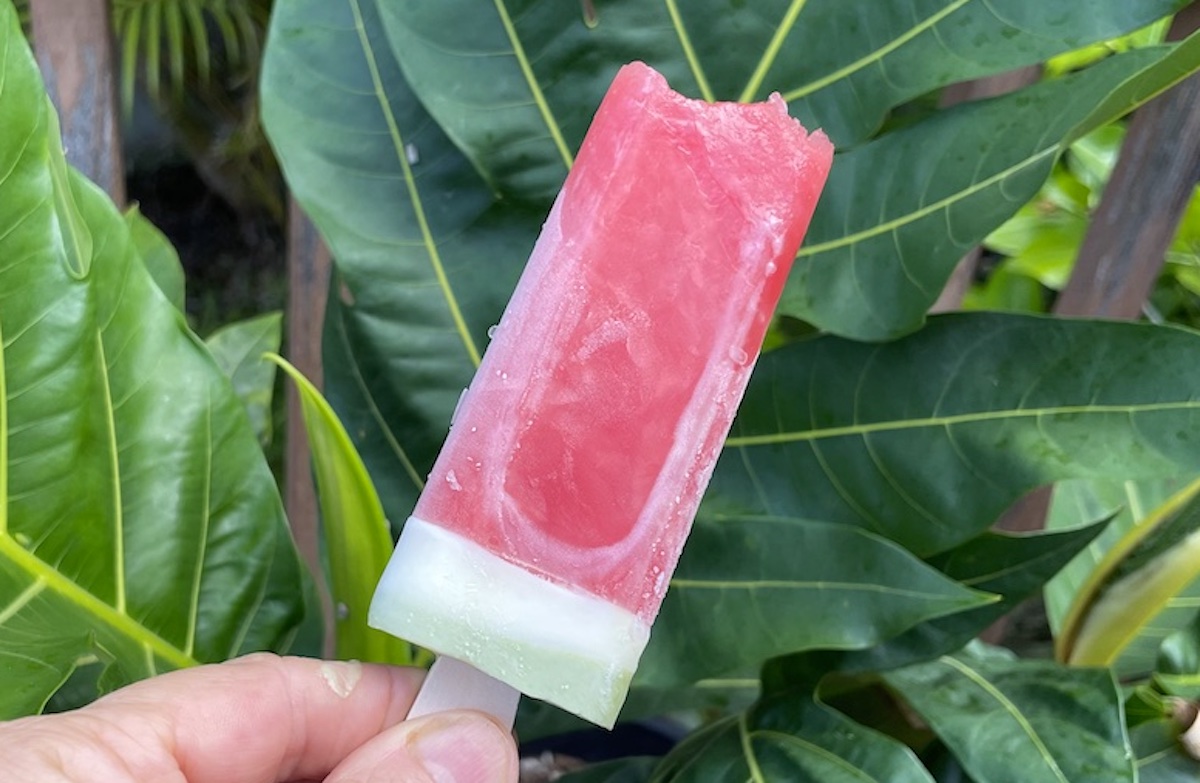 All this from a local boy who started his career in accounting. Justin Udom quit after five years and moved back home from California to study culinary arts at Kapi‘olani Community College. He worked at local restaurants before launching his own business in 2020. Pop Culture builds on good memories of making ice cream at home in Kuli‘ou‘ou Valley. “I thought ice pops and ice cream bars haven’t been reinvented in quite some time,” Udom explains, “so after a lot of trial and error, here we are!” The lineup reflects a strong emphasis on local ingredients. Usually eight flavors are in rotation, three seasonal (think Kinako Miso Caramel, Kabocha Cranberry, and London Fog) and five “forever flavors”—65 total to date. His latest is Coffee Cacao Nib Swirl, which Udom says is “made with a 100% Kaua‘i Coffee Cream base, swirled with a rich Coconut Milk Fudgesicle base using organic fair trade cacao powder” and finished with local cacao nibs. Nondairy options include Hibiscus Passion Punch and vegan Blackberry Yuzu lemonade with local meyer lemon, blackberry and yuzu—possibly the most refreshing flavor we’ve tried and a surprise for skeptics who fear that healthier might mean less tasty. Now you can find Pop Culture Artisan Pops at farmers markets and storefronts across O‘ahu including Feast in Mānoa, Hawaiian Chip Co. in Kalihi and Kalapawai in Kailua. At $4.25 a pop, these treats will easily be on repeat for summer and beyond. 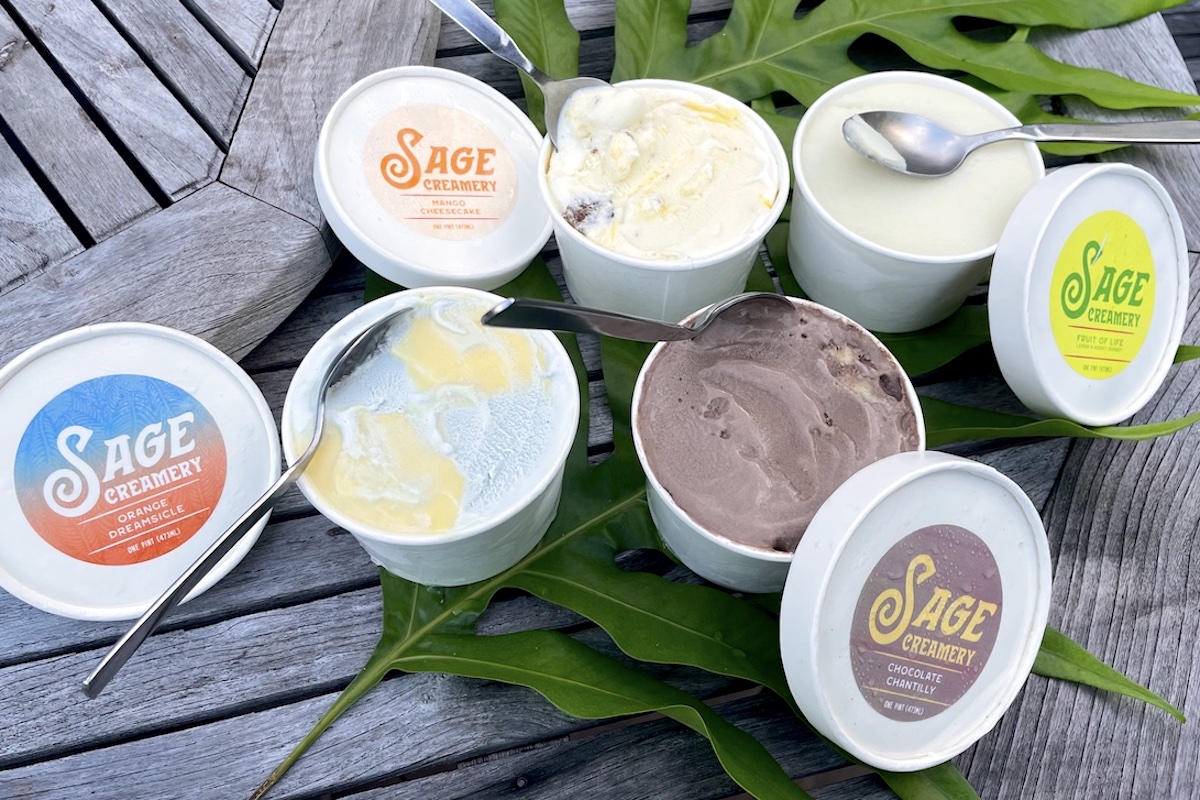 We discovered Sage Creamery at the Kailua Thursday night farmers market, impressed with the fresh fruit folded into small batches of ice cream produced by this Native Hawaiian-owned small business. Then a friend made a birthday dinner even better when she arrived bearing pints of kiawe honey lavender, Vietnamese coffee and North Shore Vanilla. We’ve enjoyed the light, sweet-citrus of lemon and honey in Fruit of Life sorbet; and my daughter’s pick, Chocolate Chantilly, best described as what might happen if chocolate ice cream and a coco puff crashed together in the walk-in freezer. In the past few weeks, we’ve been swooning over two new flavors: mango cheesecake with chunks of luscious mango and graham crackers; and Orange Dreamsicle, a creamy orange-calamansi sherbet and salted blue vanilla ice cream that tastes as good as it looks. Our other happy discovery is that Sage Creamery can be found at stores near us, as well as farmers markets, its mobile truck or a new scoop shop planned for Ho‘opili near ‘Ewa Beach. (Pro tip: This also means we can sometimes score a seasonal flavor even after the direct market sales end.) 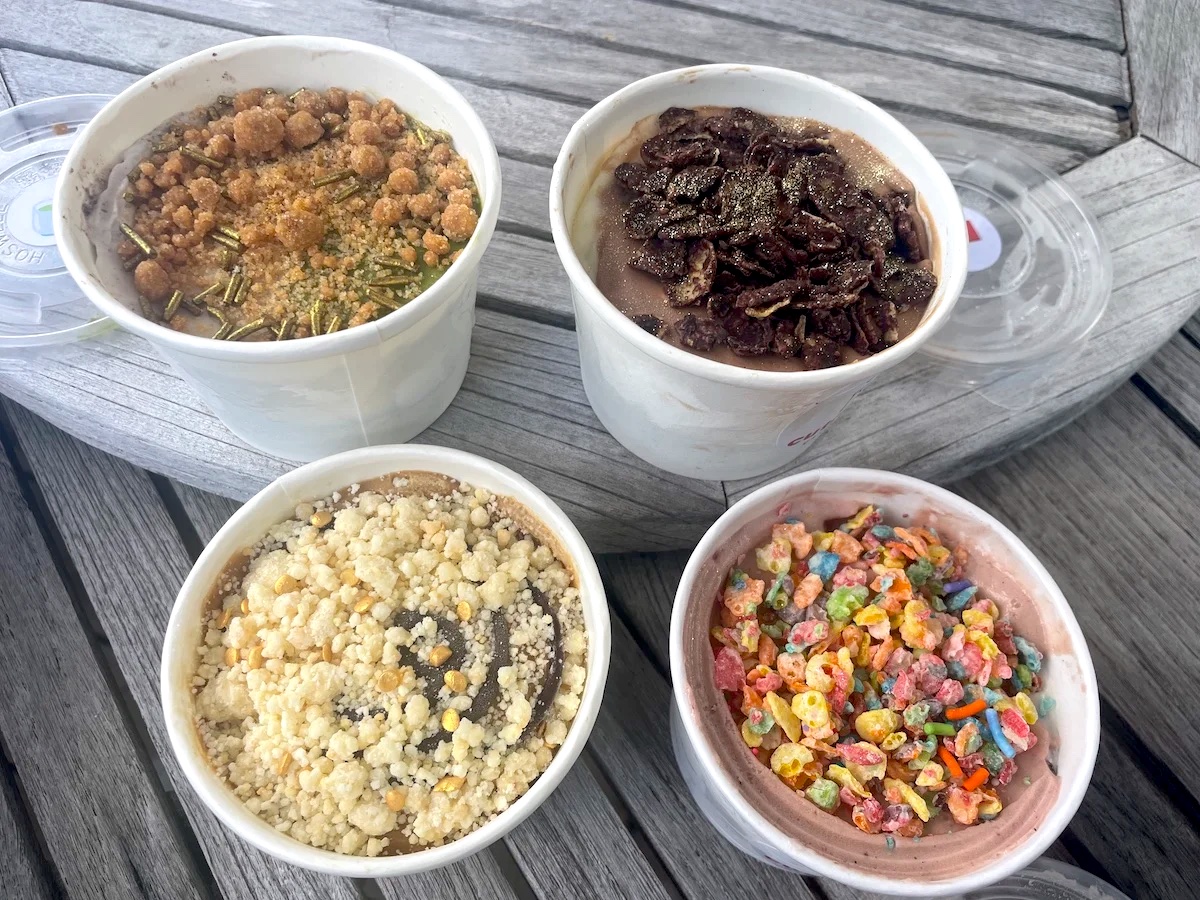 If you haven’t been ready to commit to an entire technicolor cake-and-ice-cream pie from Slice by HB Baking, we won’t question your priorities. But now you do have an alternative: an option that’s still gorgeous and tasty, but in a smaller size and brand new. Cutie Pies have been popping up in the new Slice Cream Truck around town and sometimes can be found at the store inside Jolene’s Market in the Chinese Cultural Plaza. We lucked out and snagged Cutie Pies in chocolate, Snuggy Bear, strawberry and vegan matcha. The strawberry is a looker with bright Fruity Pebbles cereal topping the birthday cake ice cream, strawberry ice cream and bits of cookie crust. But Snuggy Bear slayed the others with just the right mix of textures and salty-sweet flavors: coffee almond fudge and English toffee ice cream with an Oreo crust and salted milk crumble.

SEE ALSO: Ice Cream Pies by the Slice Are a New Thing in Chinatown 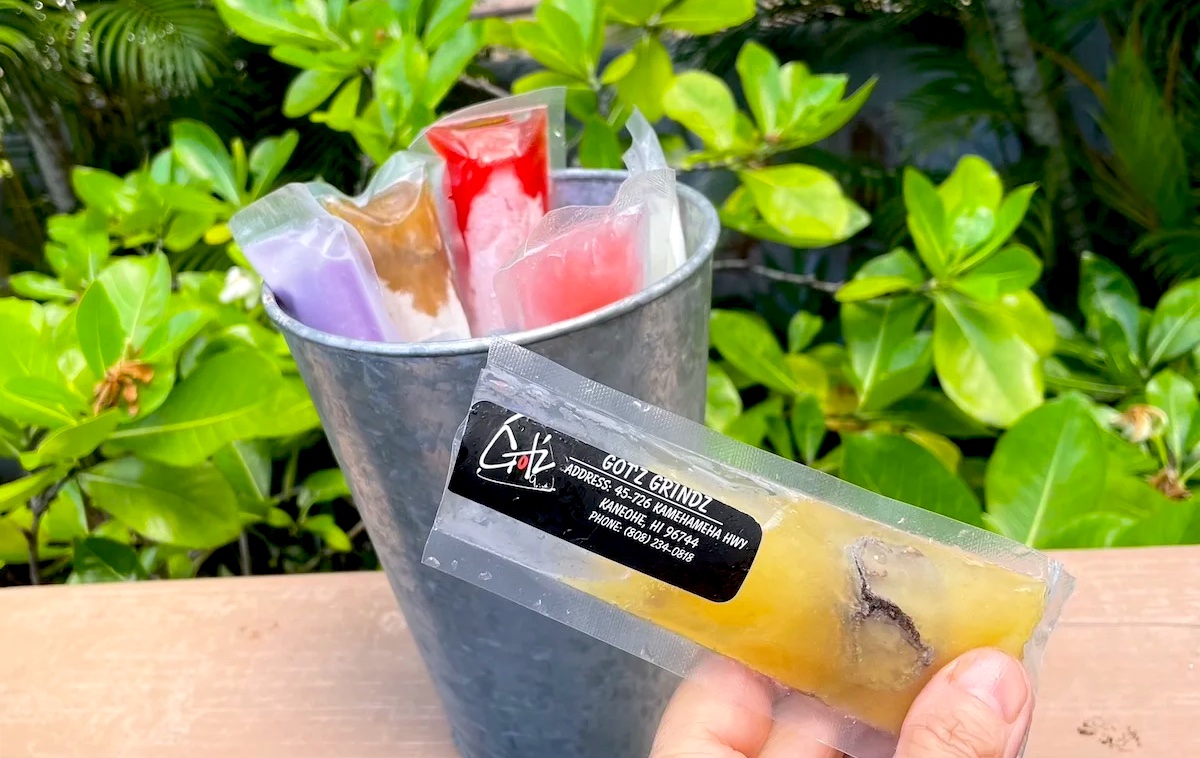 Sure, Kāne‘ohe’s Got’z Grindz has earned a worth-the-drive rep for original savory treats: the cold-ginger-chicken musubi, ume shiso Spam musubi, the picnic pack assortment of half-size Spam musubi for airplane snacks. When we dug into the freezer case on a recent visit, we found some original frozen treats from the creative folks in the Goto family.

First up, mui pops. These ice pops debuted last year with bits of li hing mui and seed to add a salty tang that offsets the sweet, fruity flavors. The newest flavors for this summer bring mango, passion orange guava, and pineapple into the rotation alongside root beer, blue vanilla, green river and strawberry. We found they had more li hing flavor throughout the pop than another we’d tried, not just around the seed. We also appreciate that the flavors change each time we visit. 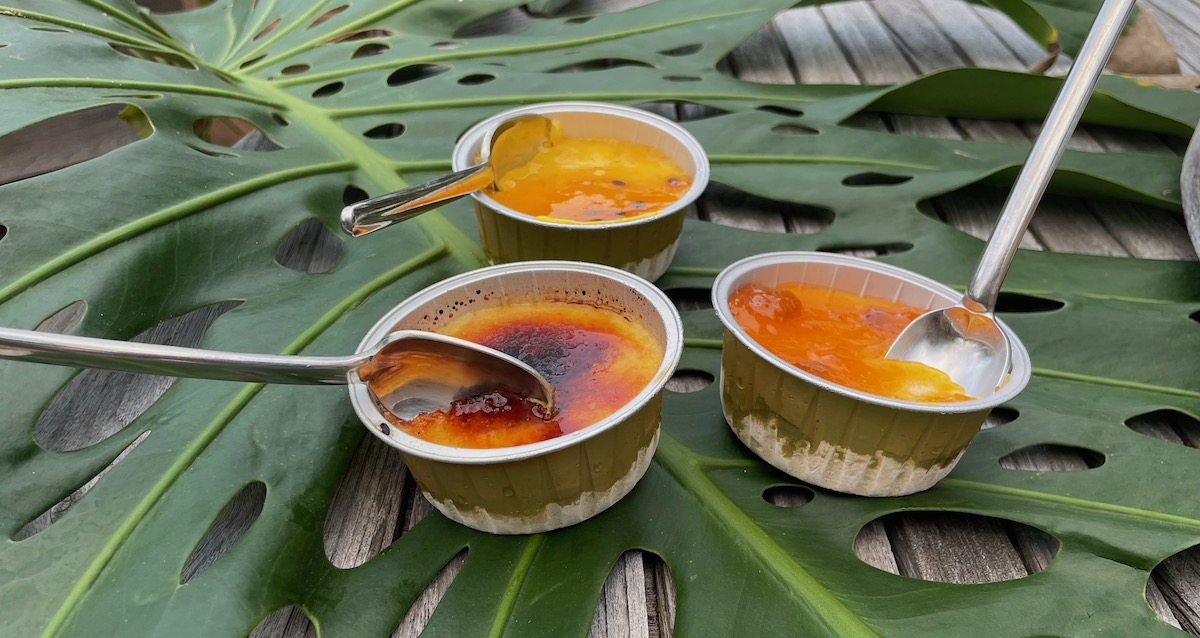 Another frozen treat that’s popped up this year at Got’z Grindz was inspired by a family vacation: frozen crème brûlée. “We actually had that dessert in Japan at a restaurant, and we thought ‘Oh, my God, what?’ It’s like the best thing,” says Yumi Goto. After they returned home, her brother-in-law who is “a total dessert guy” worked on a Goto version, experimenting until he was happy with a smooth, creamy version that’s a little custardy. New for this summer are more brûlée flavors, jazzed up with house-made purées of fresh mango, strawberry and liliko‘i. Goto says they do need to tell customers this dessert is designed to be eaten frozen: To enjoy the full icy effect, don’t try to thaw it or torch the top at home. 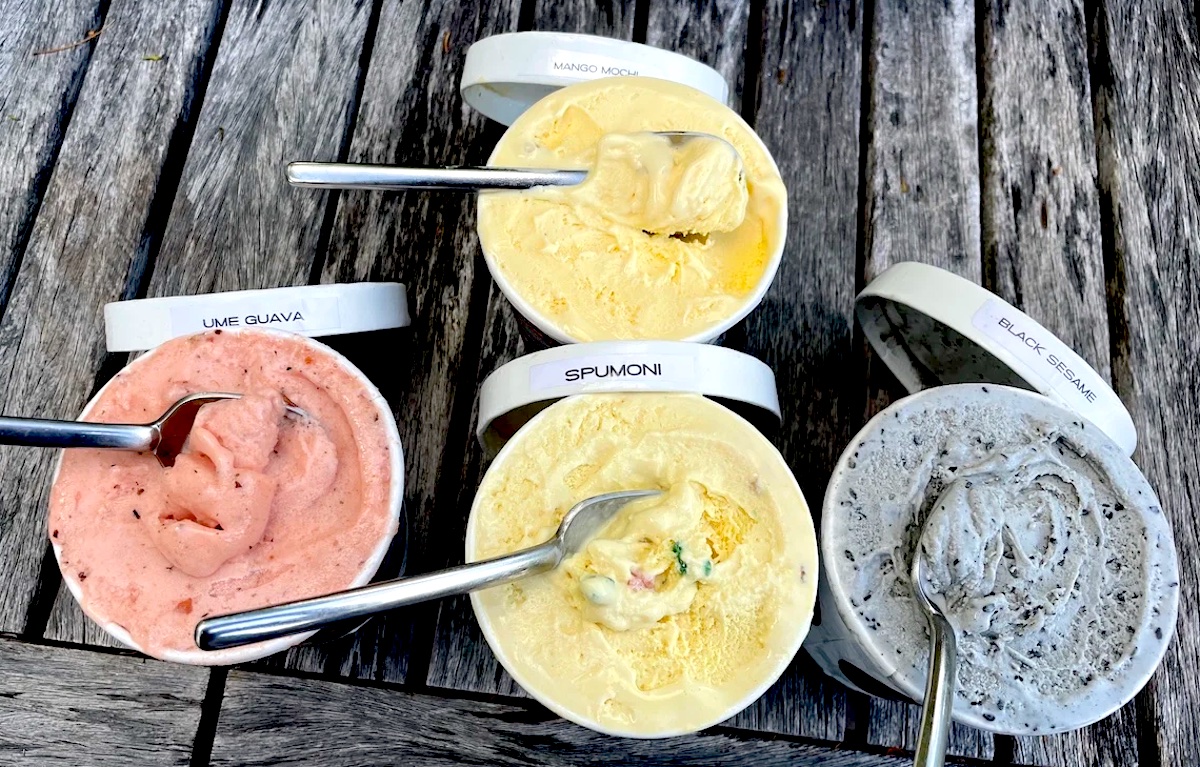 We’ve been fans of La Gelateria since we used to hit the factory for mid-afternoon dessert runs coordinated by a savvy co-worker back in the ‘90s. Turns out he’d discovered that the company did low-key retail sales when he dated someone in the restaurant business. Even then the small factory, started in 1981, had the air of a speakeasy: Pre-pandemic, we could walk in and select cups and pints of gelato from a freezer near the door. Some of our favorites included the black sesame, chocolate and coffee gelato flavors, and whatever fruit was in season for the sorbetto selections. Recent visits revealed these new discoveries: an ume guava sorbetto, local mango gelato made from your choice of common or Fairchild mangoes, and mango and mochi gelato. Our fave black sesame gelato is still there, as is classic spumoni and no-sugar-added vanilla. When in-person visits disappeared during the pandemic along with most of its restaurant sales, La Gelateria kickstarted its online ordering. Happily, the prices are still reasonable for restaurant-quality treats. And the place still has the slightly illicit vibe: We pull up under the mango tree out front, knock, and a masked worker emerges to get our name. Then we wait under an umbrella until she returns with our pints. The online ordering system lets us narrow our search to what’s in stock, a vast improvement over an earlier iteration that allowed us to view every flavor, only to learn that many weren’t available. 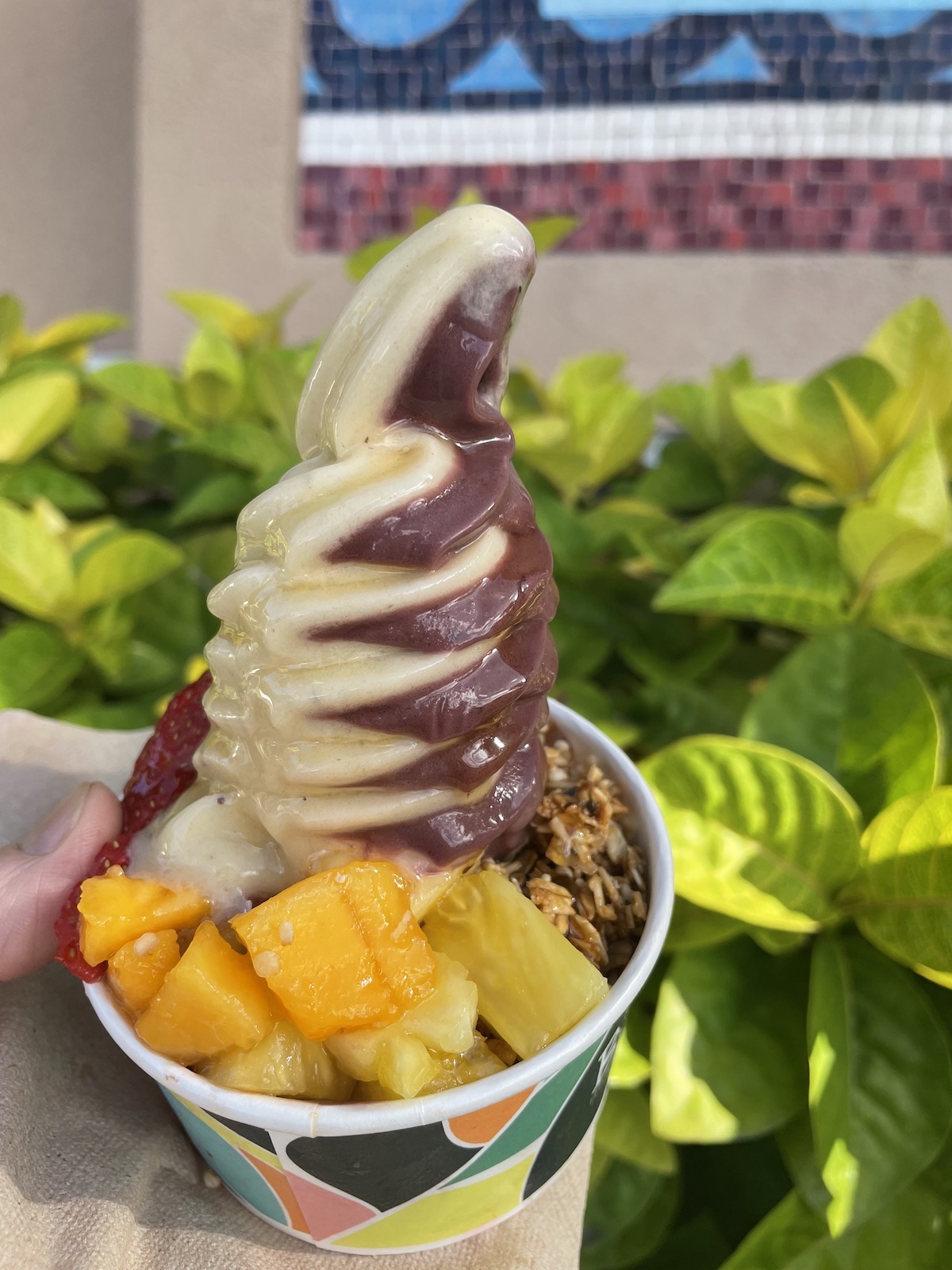 Yearning for a swirl of frozen treat without the guilt that might come with ice cream or gelato, we happily head to Banán, which turns locally grown bananas into plant-based soft-serve. We still love the original banana flavor, topped with the company’s own mac nut honey butter, some local fruit or maybe some chocolate. But we appreciate the newer Riss Moore, swirled with acai, a nod to humble and inspiring surfing Olympian Carissa Moore. Sure, she’s married to one of Banán’s founders, but we’d name something after her if it was our company, too. Various flavors are served in cups, bowls, acai bowls and even a pineapple boat. 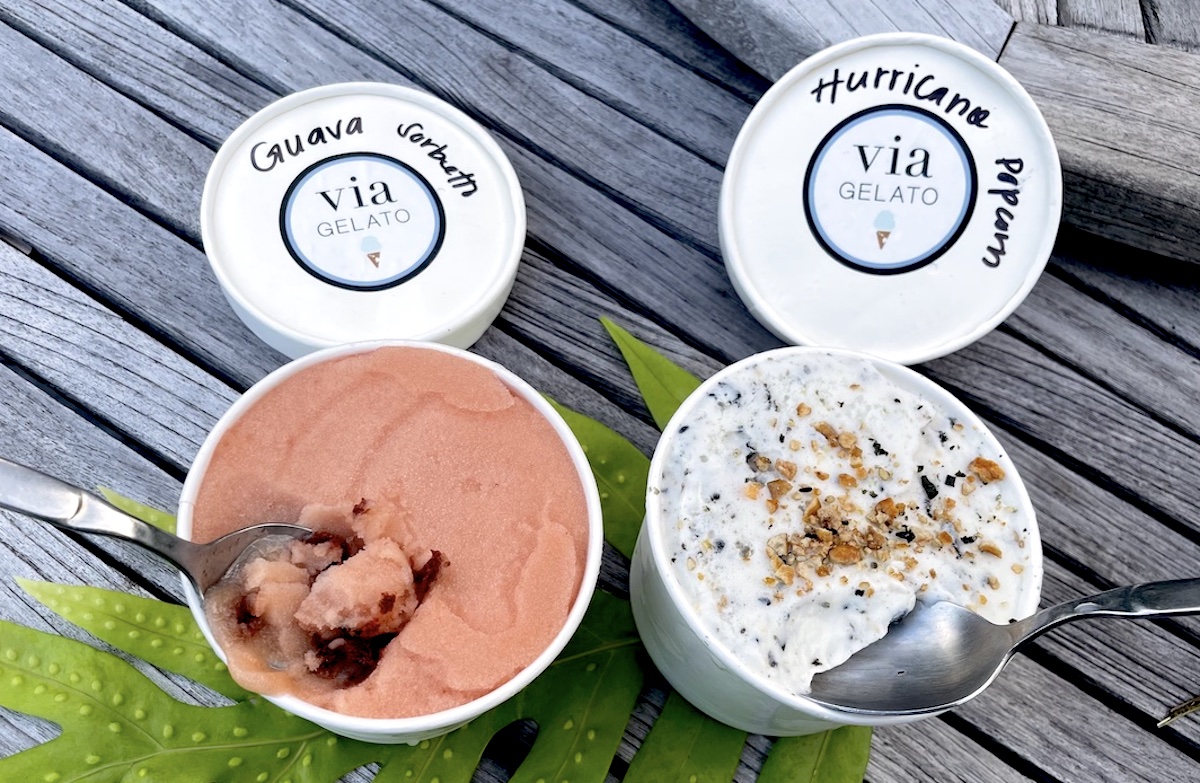 We think of Via Gelato as the Goldilocks of dessert places because even after a lovely meal nearby in Kaimūki or Kapahulu, we somehow manage to find room for something from the 12th Avenue business. The flavor mix appeals to the mix of tastes in our friend group: indulgent, vegan, citrusy or experimental. Fun new flavors include Butterbeer, hurricane popcorn, vegan corn gelato and July’s special, Mango Float. Nor is Via’s sorbetto to be ignored. We recently tried vegan guava sorbetto swirled with li hing mui topping ($1.50 more and so worth it) at the suggestion of our helpful server. The mix provided optimum pucker to fruity sweetness ratio. Via’s adventuresome spirit of we’ll-make-just-about-any-flavor keeps us coming back, as do its email newsletters complete with updates on the mynah bird neighbors. Someday we’ll bring home some of the gelato sandwiches that tempt us. But so far we can never resist scoops of the latest concoctions as well as our old gelato favorites, fierce chocolate and haupia.