It’s 5:15 p.m. on a Tuesday and Goen is already packed. I’m excited and at the same time wary. I have visited Goen four times before this, when it first opened in 2018 and throughout its first year. Every time, while service was always good, I thought the flavors fell flat and execution didn’t meet the price point. While I had personally given up on Goen being a fave, like most eateries in Kailua and especially those catering to visitors, the Roy Yamaguchi restaurant proved popular—even though it wasn’t raved about by locals. That’s what pained me about Goen: I really wanted to love it. With that in the back of my mind, I’m greeted by a charming server and place my order.

I decide on the 50/50 Chilled Hau‘ula Tomato Gazpacho ($8), Hong Kong Style Crispy Ribs ($10), Shrimp Tempura Roll ($21) and the Adobo Pork Belly and Braised Short Rib ($35). I’m sipping on a liliko‘i spritzer when my food arrives promptly. First up is the gazpacho. My whole sweaty being is calling out for the cold soup. The 50/50 in the name alludes to the tomatoes, half of which are roasted and the other half raw. The soup is balanced and luscious, summer in a bowl. Smashed guacamole is a creamy surprise at the bottom, while a garnish of fried garlic lingers with just the right amount of bitterness. 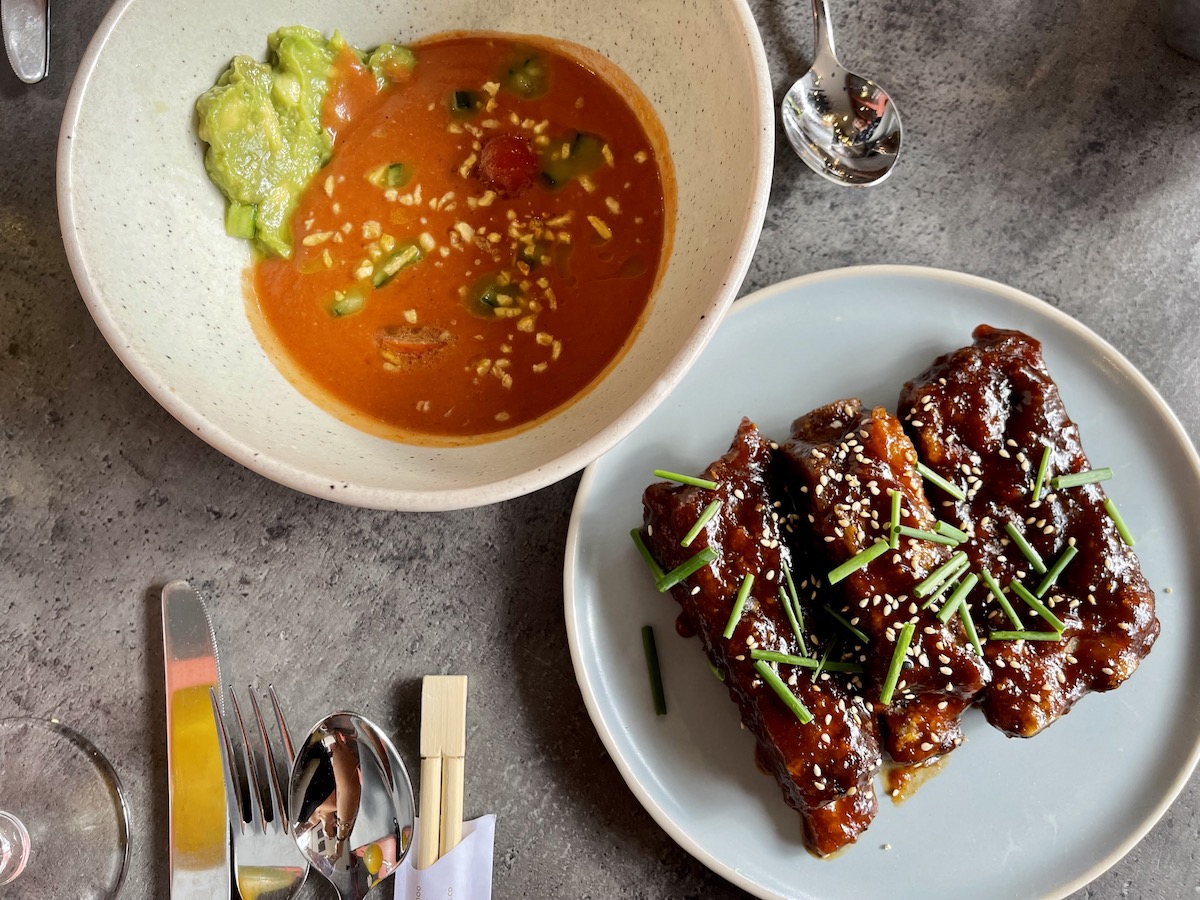 Now the ribs. Just from the look of them, I think they might be the classic Szechuan style found at other Roy’s locations. But immediately I taste the difference. The ribs are cooked then fried before being tossed in sauce, creating a sexy combination of crispy and succulent—fatty bits play nicely with the tangy sauce. The barbecue sauce is less spicy than the traditional Roy’s version, with a bright finish. 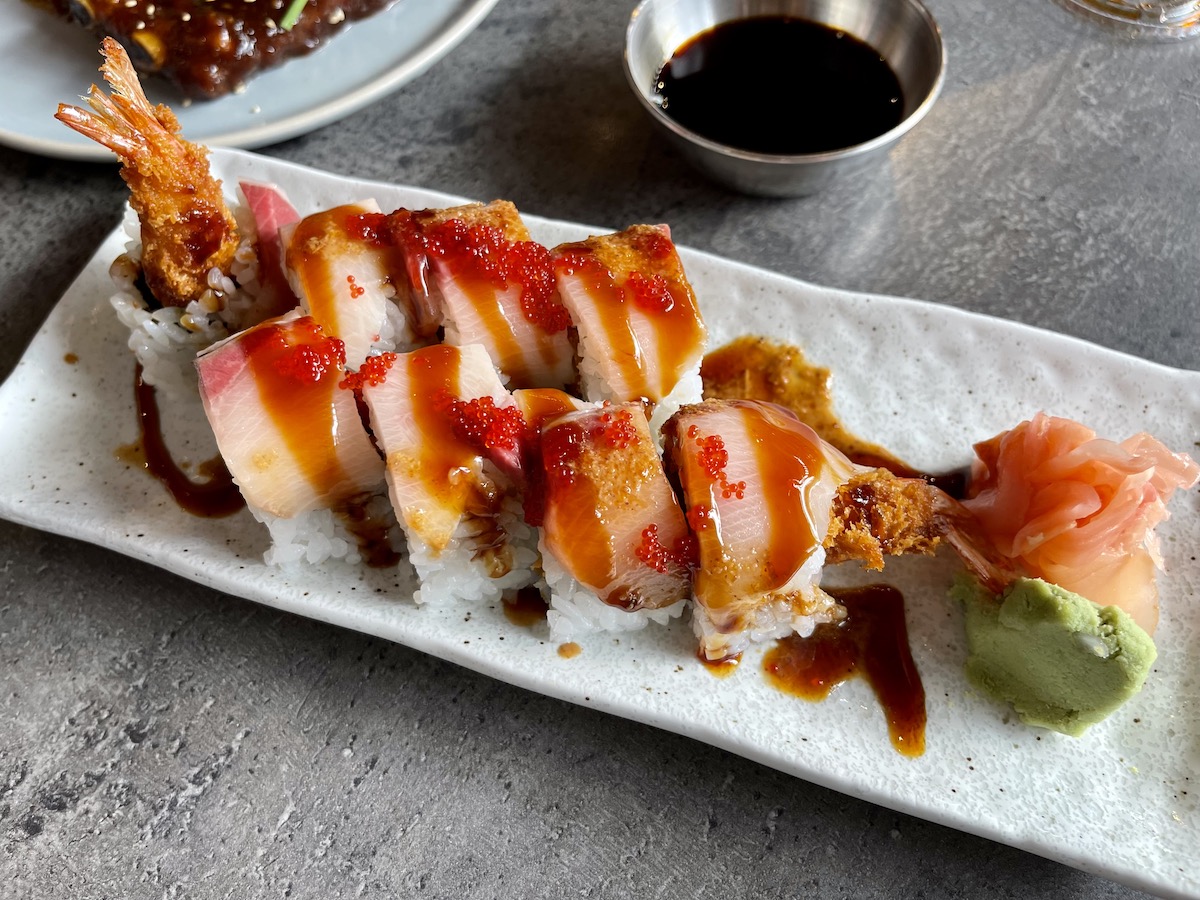 The shrimp tempura roll is tasty. The shrimp is still nice and hot while a slice of cool hamachi complements each piece. The rice ratio is walking the line for me—I’m not a fan of a clunky roll, but attention to detail has kept this one within boundaries. 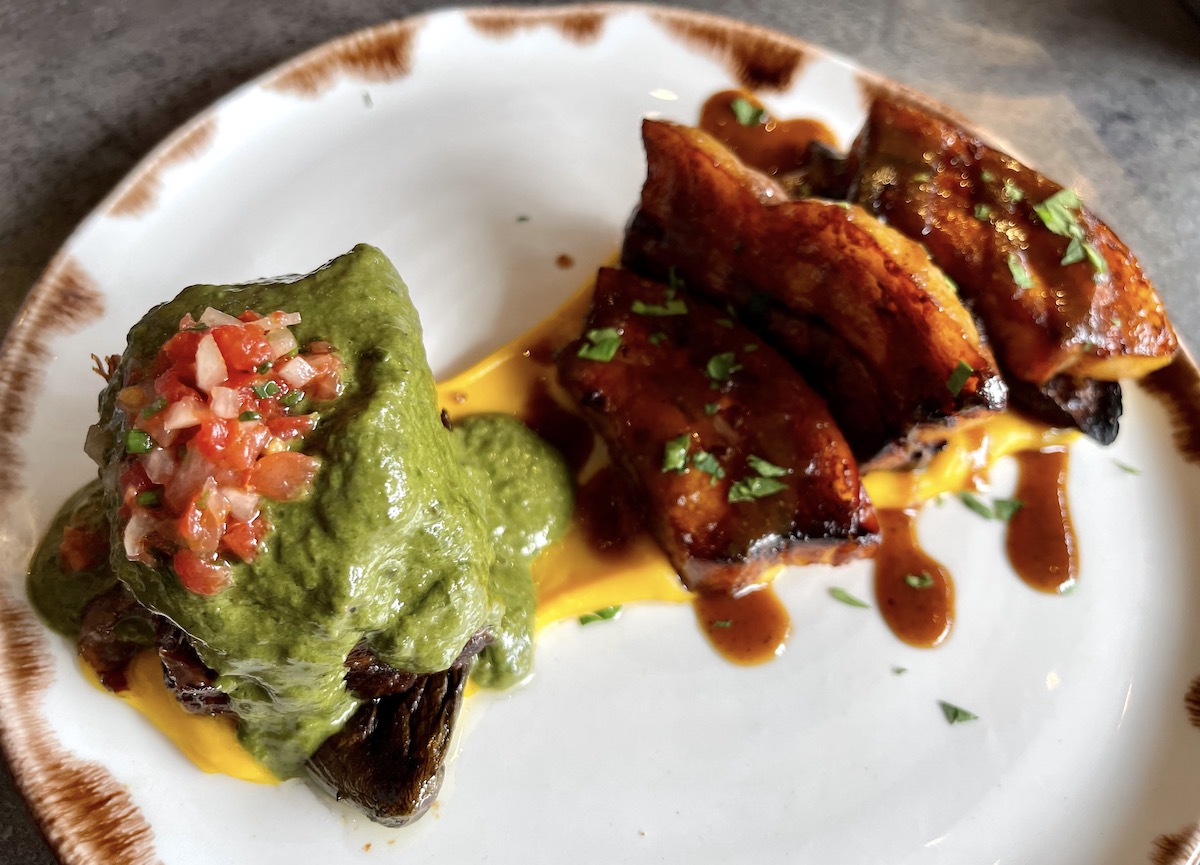 Looking over the menu, I only recognize one dish from Goen’s opening. Our server tells us that a new chef, Russell Chu, took over the kitchen last year. With a big smile she adds, “Chef Russell, he cooks with his heart.” With that, we’re ready for the main course. Adobo pork belly is presented on top of silky kabocha purée alongside a chunk of braised short rib covered in lu‘au sauce and micro–diced lomi salmon. The pork has been glazed with an adobo sauce, but right away I’m missing an intense waft of vinegar that makes every Filipino and adobo lover salivate. The texture on one side is crispy, but upon inspection I realize that only that side of the pork belly got that treatment. The uncaramelized side throws off the balance of texture, and I also realize that I need more adobo glaze, which on its own is intense in the best way—strong peppercorn, bay leaf, vinegar and even Worcestershire flavors are loud and necessary to balance the rich, fatty belly. I dump the sauce over the rest of the pork belly—that’s better. The braised short rib is dry, unfortunately, but the lu‘au sauce is a creamy dream while the mini lomi is a cute touch.

We order two desserts, the Halo Halo and the Popcorn Panacotta. The textures are way off, which makes me suspect the restaurant doesn’t have a dedicated pastry chef.

Although it didn’t end on the most memorable note, overall the meal is a win. I leave satisfied and excited to come back and try more dishes. The ambience is enjoyable and the service is solid. For me, Goen is finally on its way to becoming a Kailua fave—and I could not be happier.