There are two camps when it comes to bagels: New York and Montreal. The original from New York is American large, boiled in salted water and flavored sweet or savory. The Montreal is slender by comparison; its dough incorporates eggs and honey and gets boiled in honey water, then coated generously in seeds.

Side by side, the differences are profound, as demonstrated by the bagels from Empty Elle in Kailua. The new Montreal-style bagel shop, located inside Grace in Growlers, is the pinnacle of bagels in Hawai‘i and to me, worth the hop over the Pali. 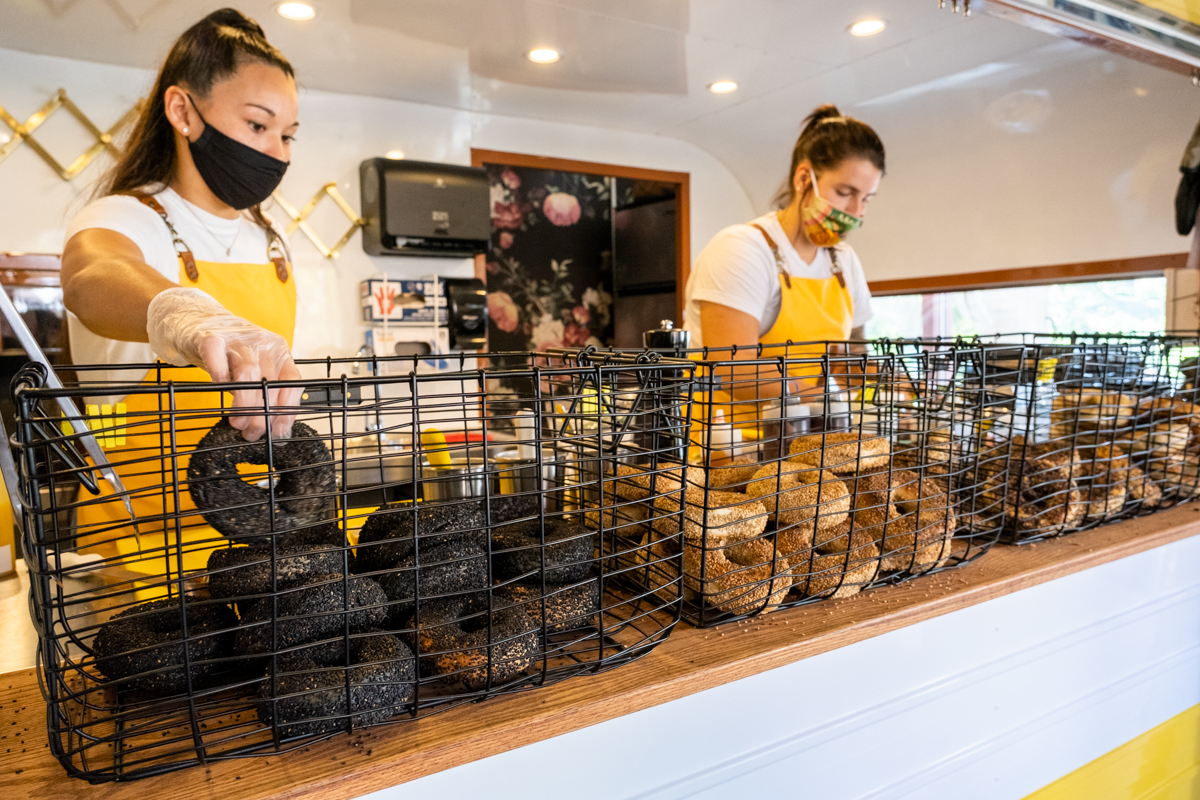 Each starts as dough made with Mānoa Honey. They’re hand-rolled by the dozen and boiled in honey water before they’re encased in the traditional Montreal flavors of white or black sesame seeds, poppy seeds, Everything seasoning or none at all, and baked to achieve a crust. Black sesame bagels are colored a cool gray hue with activated charcoal.

While you can purchase sleeves to take home (four-pack for $8 or $2.50 apiece), these bagels come alive as open-faced creations and sandwiches. 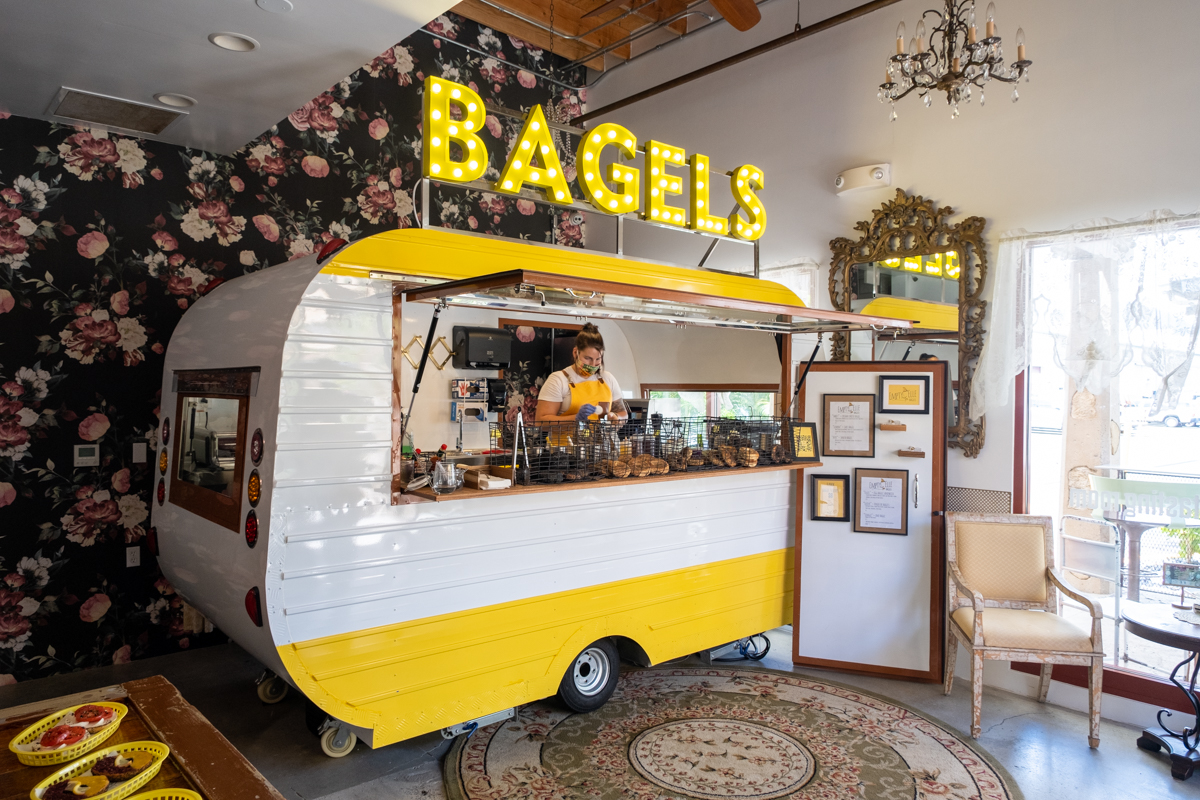 From a custom yellow camper, Empty Elle’s bagel artists prepare fresh bagels with cream cheese, local jams and butters. Start with the attention-grabbing Lemon ($7.50), a poppy seed loop lacquered with Big Island lemon butter and Maui Kula blackberry jam. This bagel is finished with flaky salt and a preserved lemon twist. The yin-yang duality of sweet and sour with a hint of salt makes this a stunning start, both visually and on the palate. 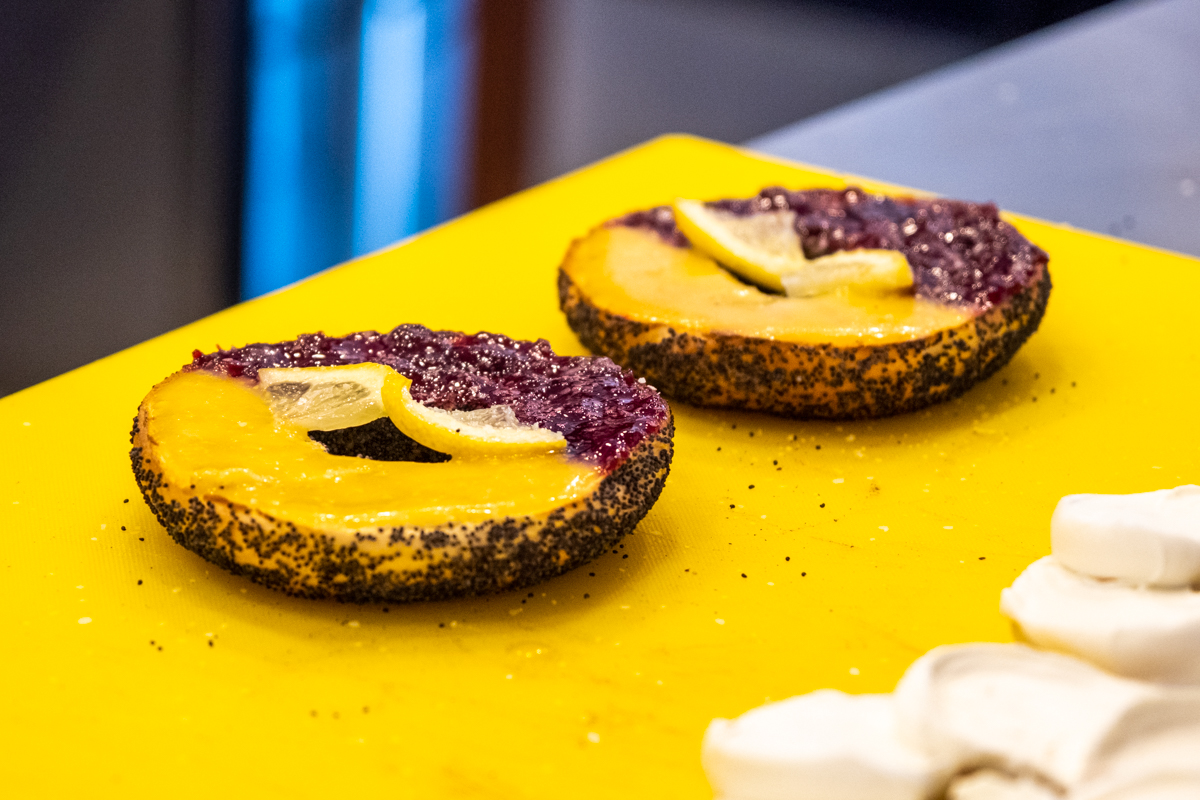 During a hosted tasting, I try more. The Sweet ($7.50) keeps it simple with petaled cream cheese, a technique that results in optimum coverage, and a ring of bright Big Island liliko‘i jam on your choice of bagel. The simple toppings allow you to appreciate the quality of the bagel, which is slightly crisp and sweet throughout.

I devour the Spicy ($7.50), which takes a toasted Everything bagel and loads it with petaled hummus, freshly cracked black pepper and slices of Andy’s Bueno Salsa’s (very) spicy pickles. The hummus significantly tempers the ghost pepper-spiced pickles, while the house-blended Everything seasoning imparts garlic, onion and salt—making this one well-rounded bagel. Other options include a dessert-like black sesame bagel with Big Island dark chocolate coffee butter ($8.50) and one inspired by Bananas Foster ($9.50).

The JLT Toastie ($11.50) is the big papa of the bunch with Jerky Labs pork jerky, Waimānalo greens, local tomato, cream cheese schmear and melted cheese on an inside-out grilled sesame bagel. There’s a lot going on, but each bite is comforting and filling. 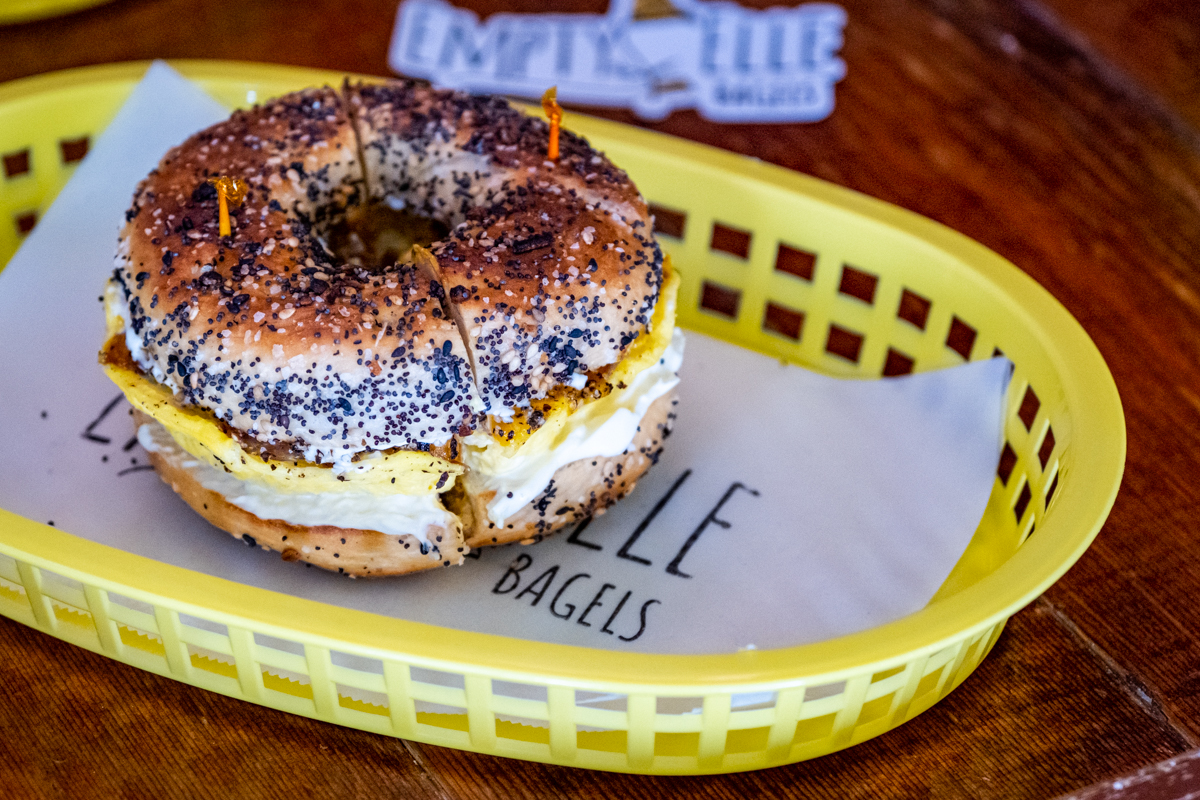 The Eggel sandwich ($9.50) satisfies with heft in a compact package. Pick a bagel and Empty Elle fills it with a cream cheese schmear, scrambled eggs, sharp cheddar cheese and slices of Jerky Labs pork jerky crisps—a brilliant substitute for crispy bacon without a mess in the kitchen.

In the mornings, Creature Coffee Shop sets up a cart with cold brew and espresso drinks, though it’s the cinnamon-spiced horchata latte that stands out for me. In the evenings, Empty Elle’s dense rings of dough are available with a craft beer from Grace in Growlers. If there’s one pairing to try first, it’s the Empty Elle Farmhouse Saison brewed by Beer Lab with Empty Elle’s black sesame bagels. An easy-drinking ale with traces of honey, it finishes clean and refreshing. 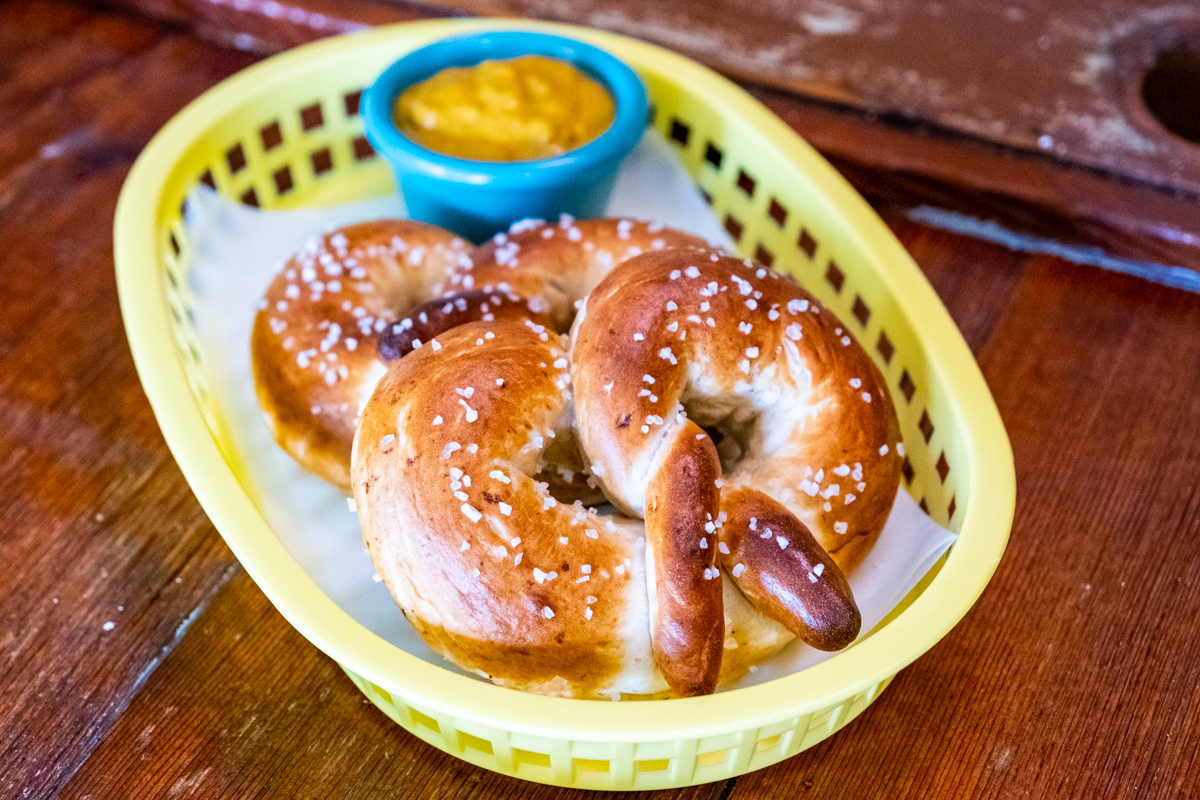 As a nod to its roots in New York City, Empty Elle also prepares soft pretzels ($10) with beer cheese and craft mustard. They’re made with the same dough as the bagels. You can also snack on crisp bagel chips ($6) made with leftover bagels.

Speaking of roots, Empty Elle’s route to Kailua is dizzying in its geographic scope. At its crux is a bagel shop in Auckland, New Zealand called Best Ugly. This is the first place I tried a Montreal-style bagel: I was on vacation in 2016 when, entranced by the wafting scent of bagels being finished in a wood-fired oven, I ordered the open-faced Beche bagel, a spin on a croque monsieur, draped with blistered Emmenthaler cheese. One bite is all it took to convince me to eat a Best Ugly bagel every day of my trip. 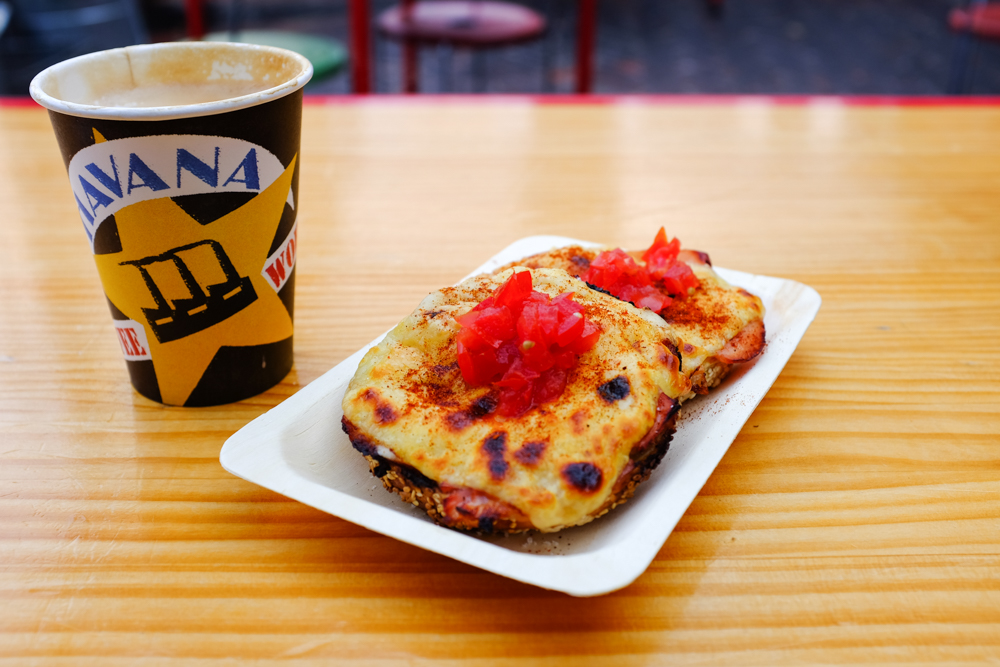 Best Ugly is also where Empty Elle owner Tim Veling had his first taste of Montreal-style bagels. For Veling, who comes from a line of Brooklyn bakers, these were life-altering. The lifelong bagel lover had consumed thousands of doughy rings, but it was this Montreal-style bagel that would spark the dream of opening his own shop.

Fast-forward to 2020 as the pandemic gripped the world. Veling was offered a retirement package from his corporate job at Hawaiian Airlines and took it without hesitation. After years of researching and dreaming and six months of testing and pop-ups, Veling quietly opened Empty Elle Bagels in February at Grace in Growlers, the charitable craft beer tap room he owns and operates with his wife Holly. 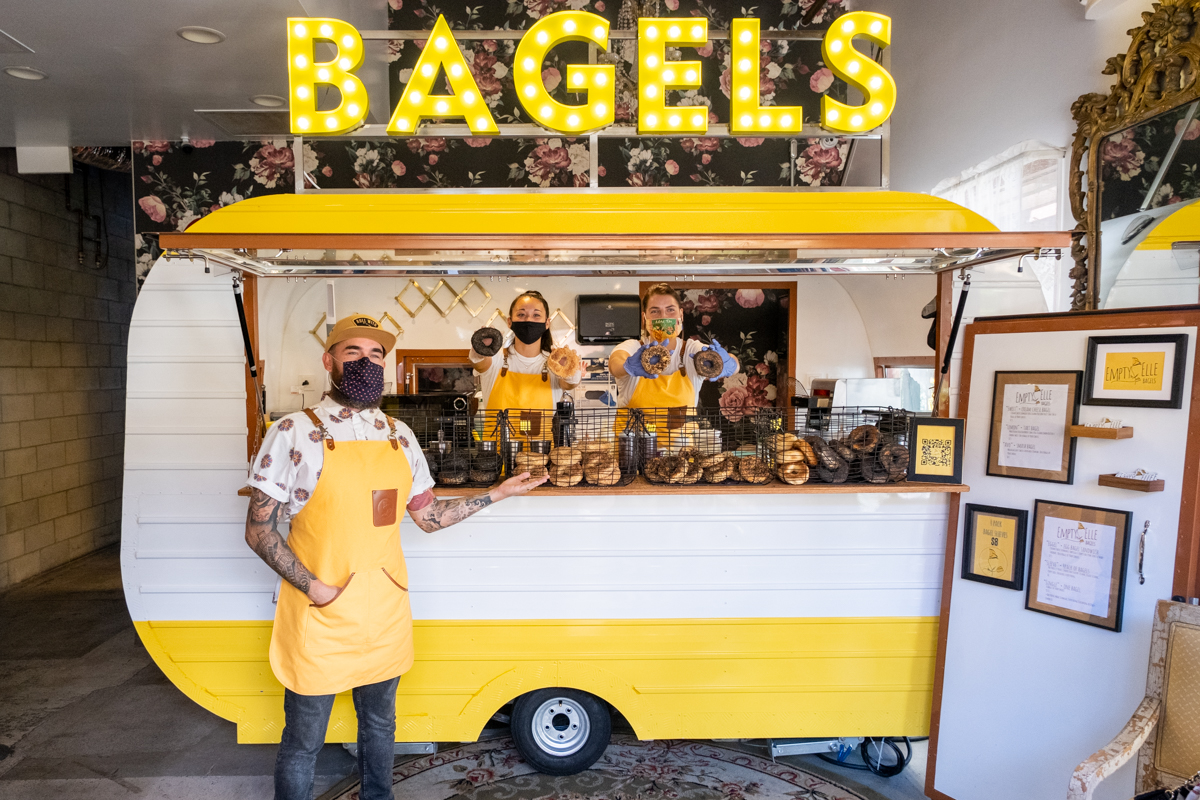 His first idea was to bring Best Ugly to Hawai‘i, but the company convinced him to start his own brand and provided the contacts in Montreal so he could learn the art of bagel-making from the same people who taught Best Ugly. With his background in a family bakery, it came naturally to him. And if you haven’t figured it out by now, the name Empty Elle is a play on the city code MTL for Montreal (the logomark features a poppy blossom from the seeds that encrust some of the bagels).

When Canada’s borders reopen, Veling plans to get hands-on experience making bagels in Montreal. Until then, he is rolling, boiling and baking an average of 100 bagels on Thursdays, Fridays and Saturdays. My advice: Go earlier for the best selection.