Local families ricochet between love and strife. A Chinatown bartender longs for martial arts movie stardom. A man named Benny builds a successful business based on bad bachelor cuisine served with a side order of sympathy.

These are the characters of Made in Hawai‘i, Cedric Yamanaka’s second collection of short stories, emerging two decades after his first book, In Good Company, was published by UH Press. He gave HONOLULU Magazine a first look at the new volume.

The stories still reflect wry humor and a strong sense of our community but go to deeper and darker places than his first book as Yamanaka again plunges us into a nuanced local landscape. He grew up in Kalihi and is likely most broadly known for his work as a journalist covering the court beat for KITV. Now he works in corporate communications for The Queen’s Medical Center but his reporter tendency to “show, don’t tell” makes it easy to forget we’re reading fiction.

Guernica, a publisher in Canada, pulled together some Yamanaka pieces that appeared in literary journals locally and on the mainland as well as a handful published for the first time in this book. Yamanaka credits writer Ian MacMillan—his former English professor at UH Mānoa—for inspiring him to seek an out-of-state audience.

“Our editors were very impressed with the manuscript’s grittiness and willingness to express hard truths without flinching. … It’s exactly the kind of book that we strive to publish.”

With that broader following, Yamanaka tells me his goal is to share the complex lives of the people of Hawai‘i: “the simple wins and losses we all face on a daily basis, with truth and honesty.” While those of us who have lived here most of our lives recognize the landscape, it’s a different take for those who see Hawai‘i more as a checkmark on their travel bucket lists.

“Our editors were very impressed with the manuscript’s grittiness and willingness to express hard truths without flinching,” says associate publisher Anna van Valkenburg. “This is, in our opinion, at the core of excellent literature. It’s exactly the kind of book that we strive to publish.” 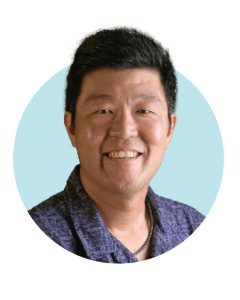 This collection of stories stretches over three decades of Yamanaka’s life and toggles between two voices. Some reflect a 20-something perspective while others show the shifting sensibilities of a man in his 50s, with a teenage son, dog and a corporate job. “There’s a kind of a darker side that wants to tackle the big questions about life and death, and then there’s the other side,” Yamanaka says, “a little lighter, a little bit more romantic, more about finding your perfect partner.”