Where Get Alan Wong’s Favorite Chili?

Editor’s note: This story originally ran on Feb. 22, 2018. Hirano Store proprietor Eric Inouye is retiring this year and passing the reins to a longtime employee who will keep Inouye’s famous chili on the menu.

If chef Alan Wong says Hirano Store on Hawaii Island get da best chili den you know it has to be good. Typically when people ask Alan what kine comfort food he likes, he often cites Zippy’s Zip-Pac as being his go-to food. He kinda loyal to Zippy’s like that since dey gave him his early start in da kitchen. So when my friend Dan Nakasone said that Alan’s favorite chili wuz this unknown chili, I wuz curious. Cuz I would figgah Alan being a Zippy’s loyalist would tell Zippy’s get da best chili, right? 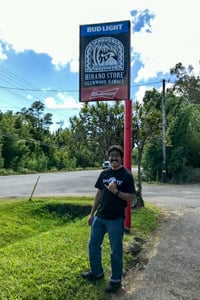 Sadly I told my friend Dan that most likely I would nevah get da chance for sample this cuz I hardly travel and da last time I went Big Island wuz ova 10 years ago. But I tink da Chili Gods wuz watching over me, cuz by happenstance I found out I wuz going be getting one free trip to da Big Island, but to Kona side.

Upon arrival, I had for convince my entire party when we landed that alllll da way on da oddah side of da island, there exists this tiny hole-in-da-wall place where da chili is da stuff of legend, endorsed by da great Alan Wong himself, brah. I hyped ʻem up sooooo much, and took us couple hours for get dea, but it nevah disappoint!

Good ting da place showed up on Google Maps, cuz my companions kept doubting wuz going have anything in da middle of all da nahting-ness on Volcano Highway. This is grown-ups asking, “Are we there yet?” ova and ova again. Hirano Store in Glenwood is one former gas station. In da store dey sell all kine stuff like snacks, drinks, motor oil, even little toys for kids. Dey get all kine breakfast food, hot dogs and burgers, and sandwiches on da menu, but our purpose wuz singular. We wuz dea for da chili. 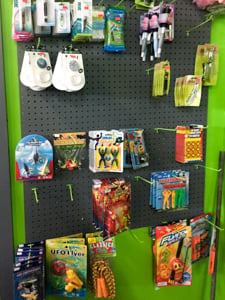 We all loved da Hirano Store chili cuz it’s so different from any oddah kinda chili we ate before. Spicy, but not overly spicy. Kinda like one blend of Portuguese bean soup and chili. I no can remembah if even had beans inside. I wuz so focused on all da oddah non-traditional ingredients.

Aftah scarfing down da delicious chili we headed toward Hawaiʻi Volcanoes National Park since we wuz relatively close to there. Maybe one noddah 30 to 40-minute drive. This leg of da drive went by pretty fast cuz we kept ourselves occupied playing try guess da in-gre-da-ments. We all agreed da chili had green olives, Portuguese sausage, ham hock, tomatoes, hamburger, mushrooms. Some people said had onions and jalapeno pepper. I said I tink get shiitake mushroom too. But no one else thought so.

Probably da best part about my visit to Hirano Store wuz that by serendipity I also got for meet da chili’s creator!  Da Chili Gods must fully love me, cuz when I told Dan I got for meet da chef, Dan said I must be lucky cuz it’s not always easy for catch him, especially midday.

Eric Inouye is da mastermind behind this famous chili. Hirano Store itself stay celebrating its 100-year anniversary this year. So I asked Eric if da chili wuz like his grandmotherʻs recipe or something. But I discovered that da chili wuzn’t around for that long. 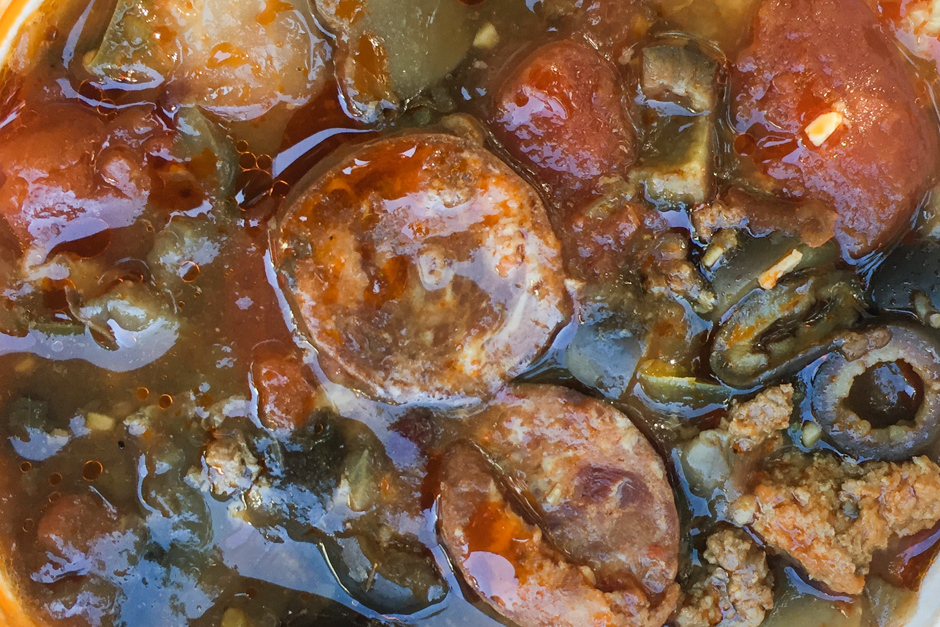 Turns out, when Eric first took over da store from his aunty in da 80s, he used to serve can-kine chili, but den he started to tinker. He started for add stuff to ʻem. And den in his quest for chili perfection he eventually found himself making ʻem from scratch. He said he knows it’s good cuz even chili connoisseurs from Texas have given him props. He said lotta people have tried for duplicate his recipe, but nobody can, cuz da secret is in da preparation.

Jokingly I told em, “What, da secret ingredient is your spit?” He laughed den he reassured me that it was NOT. But I thought to myself, Ho, even if it wuz, I would STILL eat ʻem. Cuz it tastes that ‘ono!