Purvé Donut Stop’s new menu is worth the sugar rush—but the items are only at the new Kāhala location. 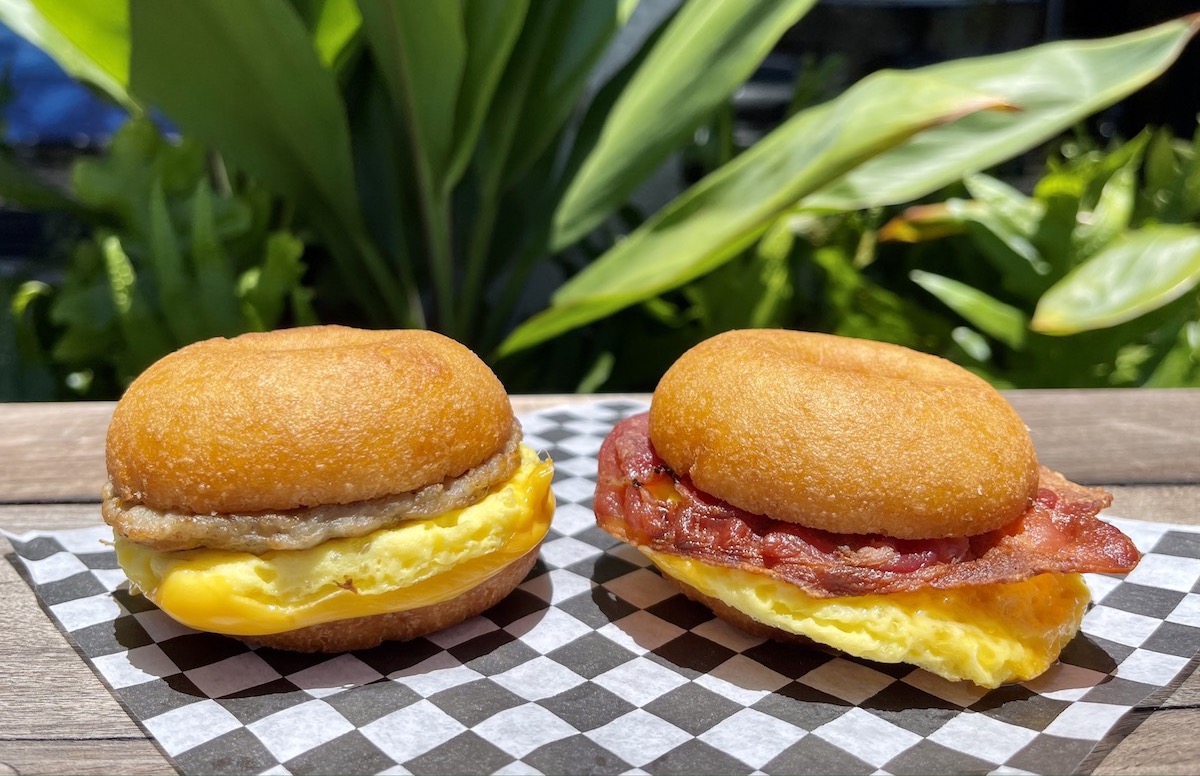 I do love a breakfast sammie. So when I hear that Purvé Donut Stop’s new shop in Kāhala has two new doughnut breakfast sandwiches, plus new drinks, doughnut sundaes and doughnut cakes, I’m already doing a crazy dance.

I’ve known Purvé’s owners, Brion Zablan and Nick Cornford, for years. Both are veterans of Honolulu’s nightclub scene, so when they decided to open a doughnut shop, they went for fun, fresh and loud. Between the bumping music, colorful wall murals and smell of fresh cake donuts, the feeling in their shops makes you want to eat more doughnuts—including, it turns out, doughnut breakfast sandwiches. As something of a connoisseur, I go in with questions—how will the two Rise ‘n’ Shine sammies hold up when eaten in the car? And the egg, what’s the egg like? Both sandwiches are made with Purvé’s freshly fried cake doughnut, which on its own is not very sweet, plus a scrambled egg patty and a slice of American cheese. The Uptuck adds on a round of bacon and a drizzle of maple glaze and Slumber Lumber has a sausage patty; both are $4.50. The aromas get me excited, then I’m hit with the combination of textures. The doughnut is super fluffy and holds together, no issues there. The crispy bacon is a good juxtaposition, enhanced by the cheese with the sweet glaze bouncing off the saltiness. The sausage version is also tasty, the pork flavor upping the savory factor for those less inclined for an early-morning sugar rush. 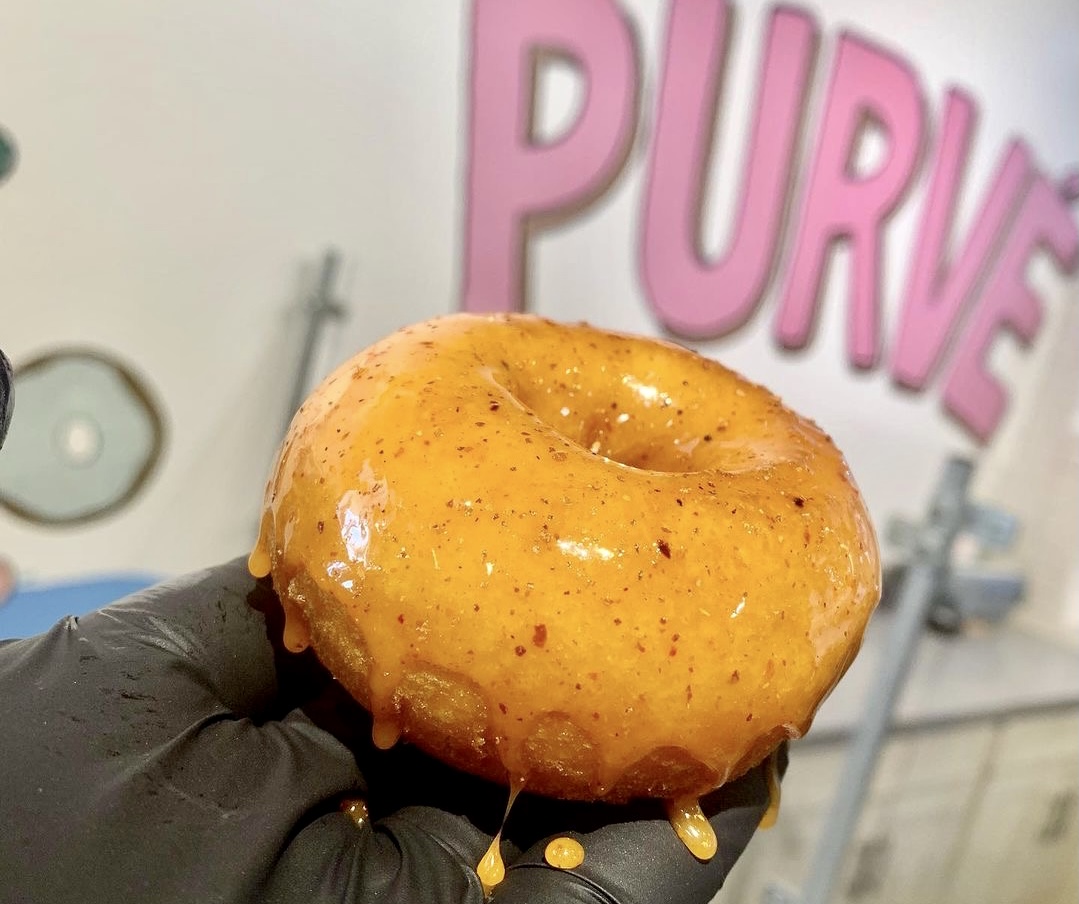 This being a hosted tasting, I’m getting through as many new items as I can. Next up is a collaboration doughnut called the Chamui Roja, developed with Mō‘ili‘ili’s Cocina de Roja. It’s a comparatively simple creation soaked in a glaze that combines chamoy and li hing mui, then dusted with the same combo and tajín ($2.75 to $3.25 apiece, depending on how many you buy). I love crack seed and Mexican treats and could eat five of these. New drinks include ube and pineapple granitas ($6). The ube has a light and creamy ube flavor while the pineapple, which I get with the optional li hing mui—like I said, I like crack seed—has a generous li hing swirl throughout. Hello, summer! Doughnut sundaes ($7) have a hot, fresh glazed doughnut at the bottom, topped with La Gelateria gelato, whipped cream and toppings. I try the minty Hulk Smash (a total mint-chip-meets-Thin-Mints moment) and the simpler Jimbo with apple pie flavors and nice details like crunchy apples in the compote. These are good, though I think perching the doughnuts on top would make for a better (and more fun) presentation. My top picks of the day? The breakfast sammies and the new Chamui Roja doughnut. 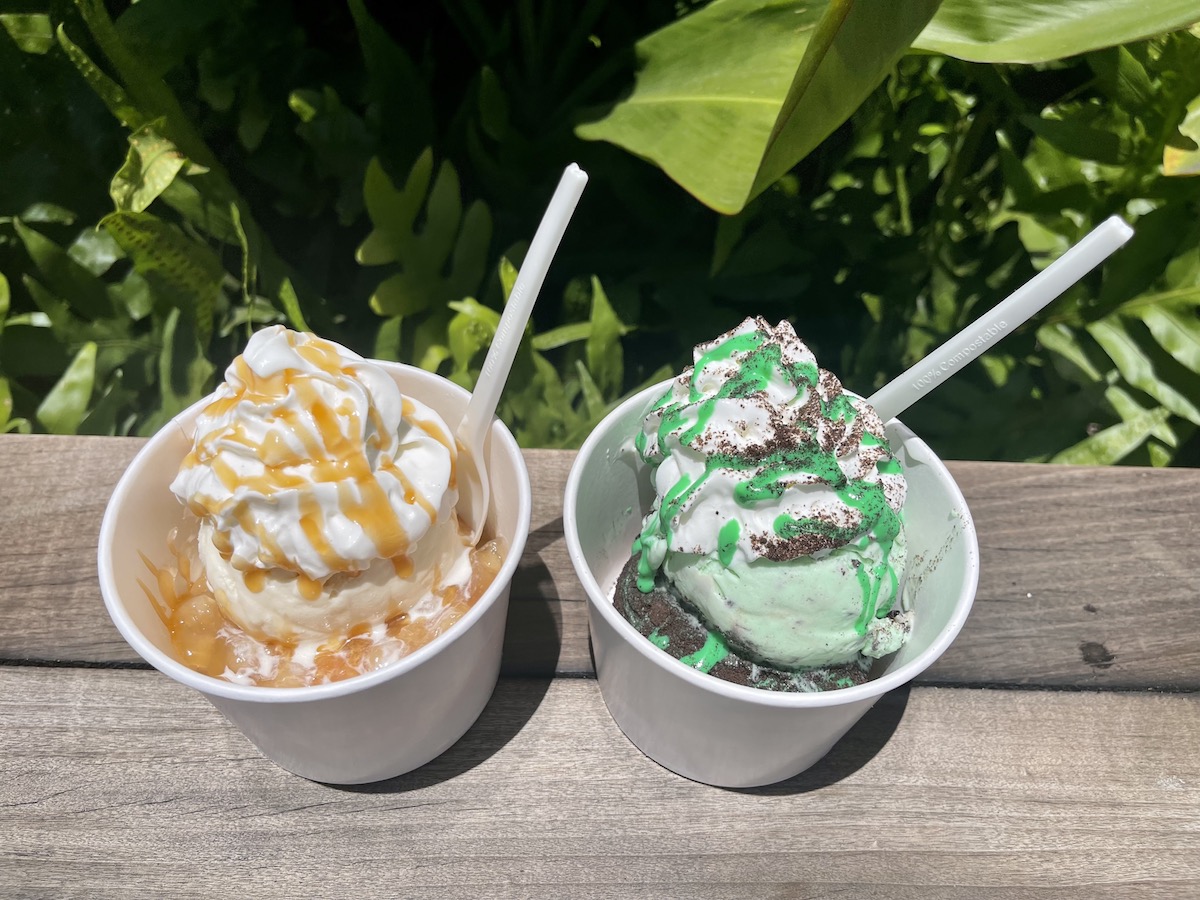 For now, the new items are only available at Purvé’s Ku‘ono Marketplace location in Kāhala, except for new doughnut cakes for order (prices vary), which are available as well at the Kona Street shop. They even set up doughnut bars at events and weddings—talk about a fun bespoke dessert concept! Maybe it’s all the sugar coursing through my body but I love the idea of everyone customizing their own little cake however they want. It’s fun and fresh, which is exactly what a trip to Purvé promises.