Want to See Your Name in Lights? The Historic Hawai‘i Theatre Can Do It

Or how one “nerdy couple” managed a surprise proposal right out of a rom-com movie in the middle of Downtown Honolulu. 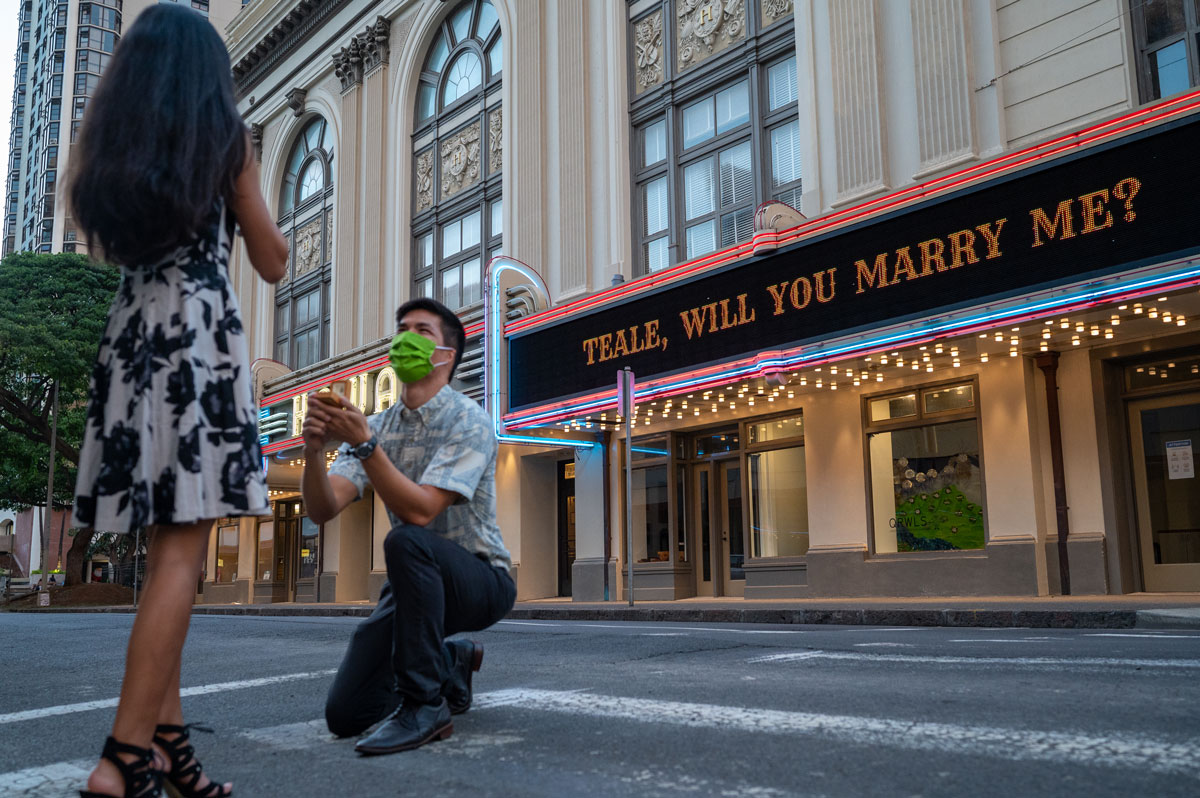 Mike Tom fibbed to his girlfriend about the exact time of their dinner reservation, awkwardly steered her toward Bethel Street instead of the restaurant, dropped to one knee, pulled out a ring box and pointed up to the marquee of the historic Hawai‘i Theatre to propose.

“I had not written anything down. I just spoke from the heart and then I told her ‘look behind you.’” After Teale Thornburg saw the proposal, smiled and said yes, she will marry him, the marquee message changed to announce their good news to anyone passing through Downtown Honolulu that night: “Teale and Mike Are Engaged! A Nerdy Love Story.”

Tom managed to propose on the night of the winter solstice, which for these two—fans of Star Wars, Harry Potter, Sailor Moon, Marvel movies—seemed extra special. Tom and Thornburg dated for more than three years, had talked about marriage and gone ring shopping together.

Still, Tom admits not everything went precisely to plan for the proposal: “I ended up goofing up because I told my friends (looped in to take photos), ‘Oh, I’m gonna stand on this corner.’ And then I chose the wrong corner so they had to readjust.” While he’d made dinner reservations for Fête, he parked closer to J. Dolan’s, which prompted questions from Thornburg.

Why nerdy? “Teale is very definitely a self-described band geek,” Tom explains. “I was also in band. We also love musicals, and we love the theater.” Both are doctors: He’s a geriatrician, she’s a veterinarian. Both grew up on O‘ahu, they play board games, travel, and Tom has fond childhood memories of the Hawai‘i International Film Festival: “I went with my family to go watch these international films at the Hawai‘i Theatre.”

Tom says the theater staffers made it easy to plan the marquee messages and that he and Thornburg are happy that the money they donated goes to preserving the marquee for years to come. Hawai‘i Theatre Center President and CEO Gregory Dunn explains that the messages sprang from a $50,000 grant awarded to the center to update and repair the sign on the condition that the theater raise a matching amount to support the project.

Dunn says the sign was last upgraded in 1997, “and dozens of transformers that feed the neon bulbs the right level of voltage had failed causing the majority of the sign to no longer function.” Since the $50,000 came at the start of the prolonged event shutdown at the beginning of the pandemic in 2020, staff had to get creative in spreading the word about the need to raise matching funds. With no in-person shows to feature, sharing messages of hope, congratulations and celebration seemed ideal, Dunn says.

Another cool tidbit Dunn shared about the marquee? “Walking under the neon sign when it’s on, you can hear the electricity as it excites the gas in the neon tubes,” which not only heightens that sense of anticipation as you enter the theater, but gives that chicken-skin realization that it’s the same sound your parents or grandparents heard when they went to the movies in the 1940s or ’50s.

While birthdays and anniversaries have been the most popular milestones marked on the marquee, Dunn says Tom’s wedding proposal was one of the sweetest messages they’ve seen. He says to expect more messages as the theater continues to navigate the pandemic.

And for Tom and Thornburg, the marquee provided a Hollywood moment, with them in the spotlight.

How to Get Your Name on the Marquee

With a donation to Hawai‘i Theatre of $150, your message can appear on the marquee to celebrate a birthday, graduation, anniversary or other milestone. This is a new initiative spurred by the pandemic to help maintain the historic theater while providing a new way to celebrate milestones that have been upended throughout the community.

Here’s what you need to know:

●      Each message will be displayed for an hour at an agreed-upon time.

●      Theater staff asks for at least 48 hours’ notice to program the message and will provide digital proofs for review.

●      The theater provides specifications and guidelines: “Any message that contains profanity, is commercial, political or inflammatory in nature, or is otherwise contrary to Hawai‘i Theatre’s mission will be politely declined.” 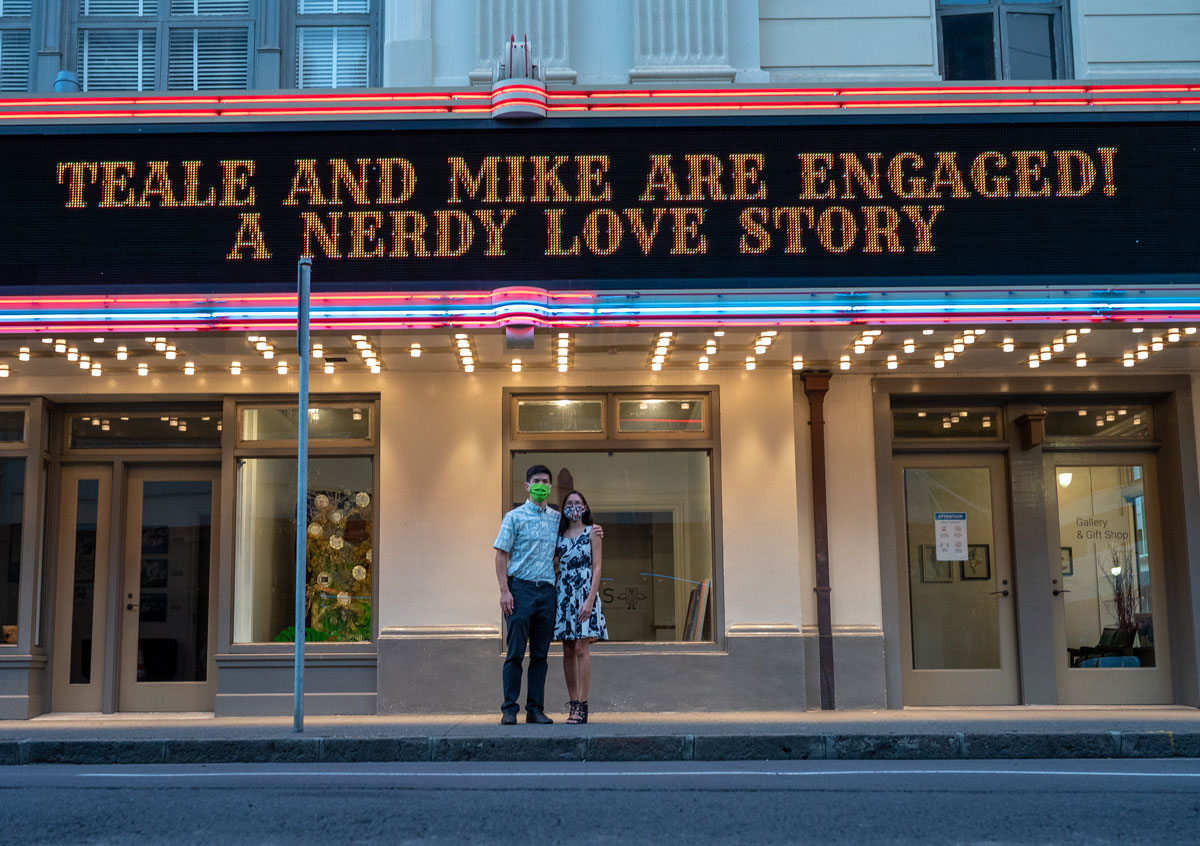 Money raised goes to keep the stunning marquee looking its best: repairing broken neon tubes, replacing lamps and any other needed repairs to the message boards. And those donations fulfill a challenge grant put forward by the Historic Hawai‘i Foundation and the Freeman Foundation. Dunn says: “Without their support, the marquee would still be largely non-functioning.”