Rebecca Pang,
Celebrated chefs. A luau under the stars. Championing females in the food and beverage industry.
On March 18, we’re in for a treat when popular PBS chefs Vivian Howard and Ed Kenney collaborate at Mari’s Gardens for Roots Run Deep, a fundraiser for Les Dames d’Escoffier that will also feature an impressive roster of Hawaii’s female chefs.
Both warm and humble, Howard and Kenney are known for bringing people together through food, championing farm to table cuisine in their communities, and having a gift for storytelling.
Howard, who runs two restaurants, Chef & A Farmer and Boiler Room, in Deep Run, North Carolina, will put a local twist on a Southern favorite from her award-winning book, Deep Run Roots. Last year, she received the prestigious James Beard Award for Outstanding Personality/Host for her work with “A Chef’s Life,” and she is a four-time James Beard semifinalist for Best Chef in America: Southeast. 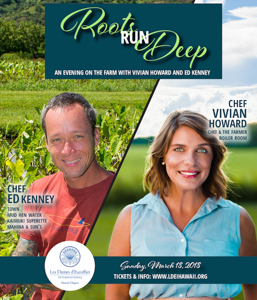 Kenney will create the evening’s luau theme with kalua pig and cabbage prepared in a traditional imu. Kenney’s four Honolulu restaurants include Town, Kaimuki Superette, Mud Hen Water, and Mahina and Sun’s. He hosts the Emmy-winning PBS series “Family Ingredients” and is a four-time James Beard semifinalist for Best Chef in America: West.
Limited quantities of Deep Run Roots are available for pre-purchase with event tickets, to be picked up and signed by Howard at the event. Additional copies will be for sale at the event, until they run out.
Ten local Les Dames chefs will supplement the main courses with dishes focused on sustainability and hospitality.