The Clarence T.C. Ching Athletics Complex will be home turf for the UH Rainbow Warriors’ games in 2021. But this isn’t the first move for the football team in the past 100 years, or the last. 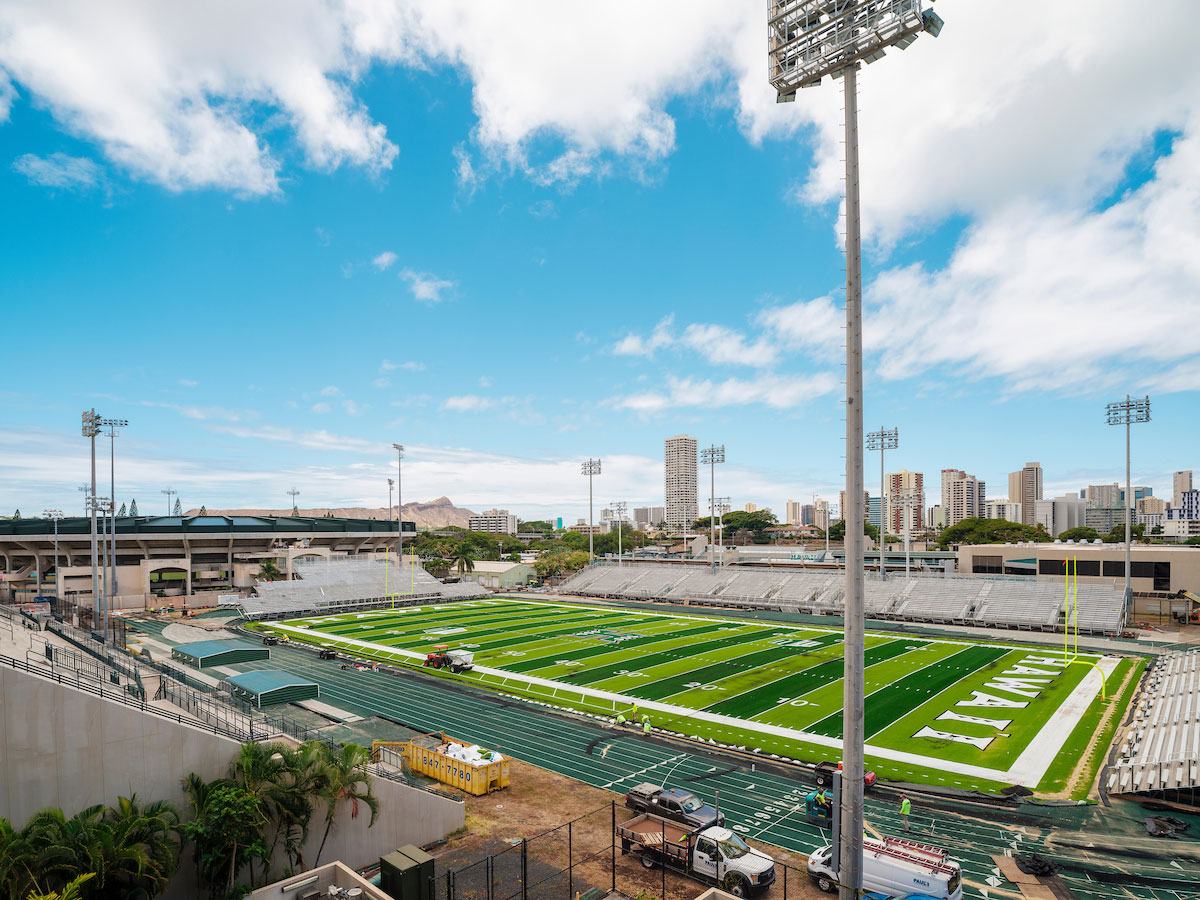 The Rainbow Warriors will not play in Aloha Stadium for the first time in 46 years: This fall, the UH football team will play its regular season home games on campus. The Clarence T.C. Ching Athletics Complex is just about a mile from where the team got its start more than 100 years ago and replaces older Aloha Stadium as the Warriors’ home turf.

The College of Hawai‘i’s first football team, The Fighting Deans, started out in 1909 playing local high school and club teams. The players didn’t have a home field, cycling between O‘ahu College, now Punahou School, and Mōʻiliʻili Field for years. The Mōʻiliʻili Field was the first athletic space for major sporting events on Oʻahu and it was there that the team first received its nickname, the Rainbows. According to hawaiiathletics.com, in 1923 a rainbow appeared over the field as UH upset Oregon State, 7-0. The name soon stuck. Football wasn’t the only sport played on the grass there; others included horse racing and baseball. And as the number of sports leagues grew, so did demand for a new field to play on.

Businessman J. Ashman Beaven answered the call. The Mōʻiliʻili Field manager and sports promoter bought 14 acres in the area and built a new $150,000 stadium on top of the crushed basalt rock that gives Mōʻiliʻili its name. (ʻIliʻili means volcanic pebble rocks, which were plentiful in that area.) It officially opened Nov. 11, 1926, with 12,000 people in the wooden bleachers to watch the UH football team lose to the Town Team. For the first time, fans could line up at permanent concession stands to buy hot dogs, sandwiches and soda water, as well as ice cream from the Honolulu Dairymen’s Association. Honolulu Stadium was known to have a friendly atmosphere. “When I was there things were great,” Chuck Tanner, manager of the Triple-A Hawai‘i Islanders in 1969 and ’70, told The Pittsburgh Press in 1983. “During the games, fans ate corn on the cob. They had some soup … won ton or something. … We had a close relationship with the fans and people.” At the stadium, people could buy boiled peanuts, corn on the cob and saimin. Clubhouses stocked Primo, a beer founded in Honolulu in the late 1800s, as well as pineapple and papaya. Honolulu Stadium, known as “The Termite Palace,” hosted its last sporting event on Sept. 8, 1975. On that day, the Islanders won their first-ever Pacific Coast League baseball championship, beating the Salt Lake City Seagulls in front of more than 7,000 fans.

Five days later, the Rainbows marked the official opening of the new $37 million Aloha Stadium. On Sept. 13, UH battled Texas A&I in front of 32,000 people. Tickets were $5 for general admission, $6 to $7 for reserved seats, and popcorn or saimin would set you back 65 cents. Chips and peanuts were 30 cents, and for $1, you could get Primo beer. The Hawaiians of the short-lived World Football League played there, too, in 1975. 2007 was the peak of Hawai‘i football success; that’s the year that Heisman candidate quarterback Colt Brennan and head coach June Jones helped propel the UH Warriors to the Western Athletic Conference championship and the Sugar Bowl against Georgia. In their final game at Aloha Stadium, the Warriors beat UNLV, 38-21. They totaled 530 yards on offense, with 278 yards coming from rushing alone. It was their second-highest single-game yard total of the season.

Citing deterioration and lack of funds during the pandemic, The Stadium Authority, a group composed of nine members appointed by the governor, announced Aloha Stadium would close indefinitely on Dec. 17, 2020. In a public statement, it said “Aloha Stadium has been expending its reserves to maintain operations since COVID-19 restrictions began. Unfortunately, we have reached a stage where we can no longer afford to continue these expenditures.” State Sen. Glenn Wakai also noted that it wouldn’t make sense to pump more money into the current stadium when there were plans to build a new stadium complex.

For now, the Rainbow Warriors will play at the Clarence T.C. Ching Athletics Complex on the south side of the Mānoa campus, marking the first of three seasons of on-campus home games. The school has estimated that it will take around $8.3 million to adjust facilities for crowds. It started by replacing the turf and installing a new scoreboard, a $1.8 million project that had already been planned.

But once the season starts, how different will pregame rituals be, and the atmosphere? For one, students who live on-campus won’t have to fight traffic or find parking—they can just walk to the field, that is if they can get tickets to games in the 9,000-seat stadium. (UH says it already has commitments for 16,000 season ticketholders, students, corporate sponsors and visiting teams.) And what happens with tailgating? And parking for nonstudent fans could be a problem; it’s already difficult enough for students who live off-campus. Next year, the school plans to be able to seat 15,000 fans, which is the minimum required for actual or paid attendance for all teams in the NCAA’s top conferences, including the Mountain West, which includes UH. The Rainbow Warriors will host their first home game this season against Portland State University on Saturday, Sept. 4.