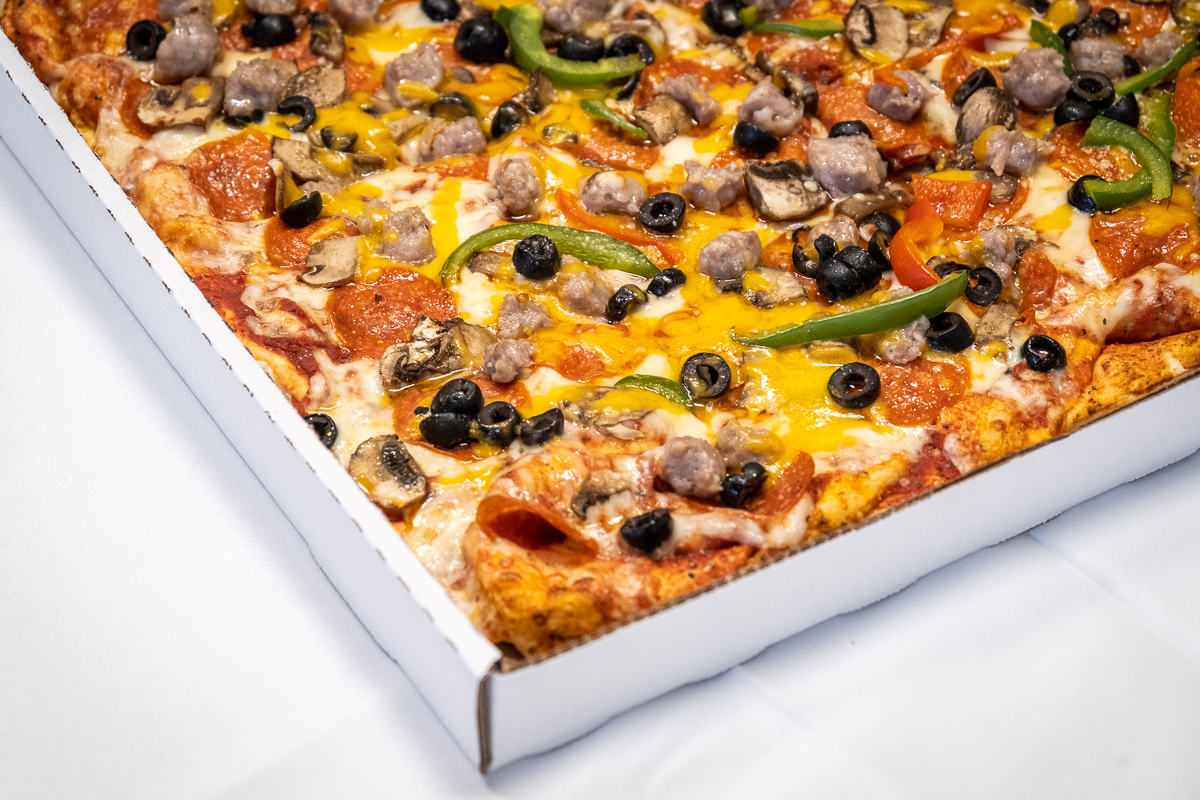 If you remember Magoo’s Pizza, chances are you also have a Magoo’s story. Legions of locals came of age making regular visits to the local chain’s pizza restaurants. Now it’s back: Original Magoo’s Pizza, known for its iconic cigarette speedboat and the tagline, “No Hu Hu, Call Magoo’s,” has opened for business in Kapahulu.

Founded by Gilbert Sakaguchi in 1967, Magoo’s in its heyday had at least 24 franchised trailers and restaurants from Hawai‘i Kai to Schofield Barracks. There was even a handful of locations in Oregon, California and Nevada. Through partnerships, Magoo’s went international with branches in the Philippines and Dubai. Its last brick-and-mortar restaurant at Puck’s Alley was known for having nearly 100 beer taps; it closed in 2007 after a 10-year run.

Sakara Blackwell, Sakaguchi’s daughter, now runs the operation with her husband, Kekoa Ornellas. She’s had the stalwart brand up her sleeve for 10 years but never had the time to restart it—she was too busy running a catering business and the lively Barefoot Beach Café concession at Queen’s Surf Beach. Then COVID-19 hit.

With event cancellations rolling in like high tide, Blackwell was forced to pivot from wedding receptions and lū‘au. Then, park and beach closures forced Barefoot Beach Café to shutter temporarily. It was finally time for Blackwell to play her hand. Magoo’s was Hawai‘i’s first delivery pizza, so restarting it in a pandemic climate that favors takeout and delivery made sense. 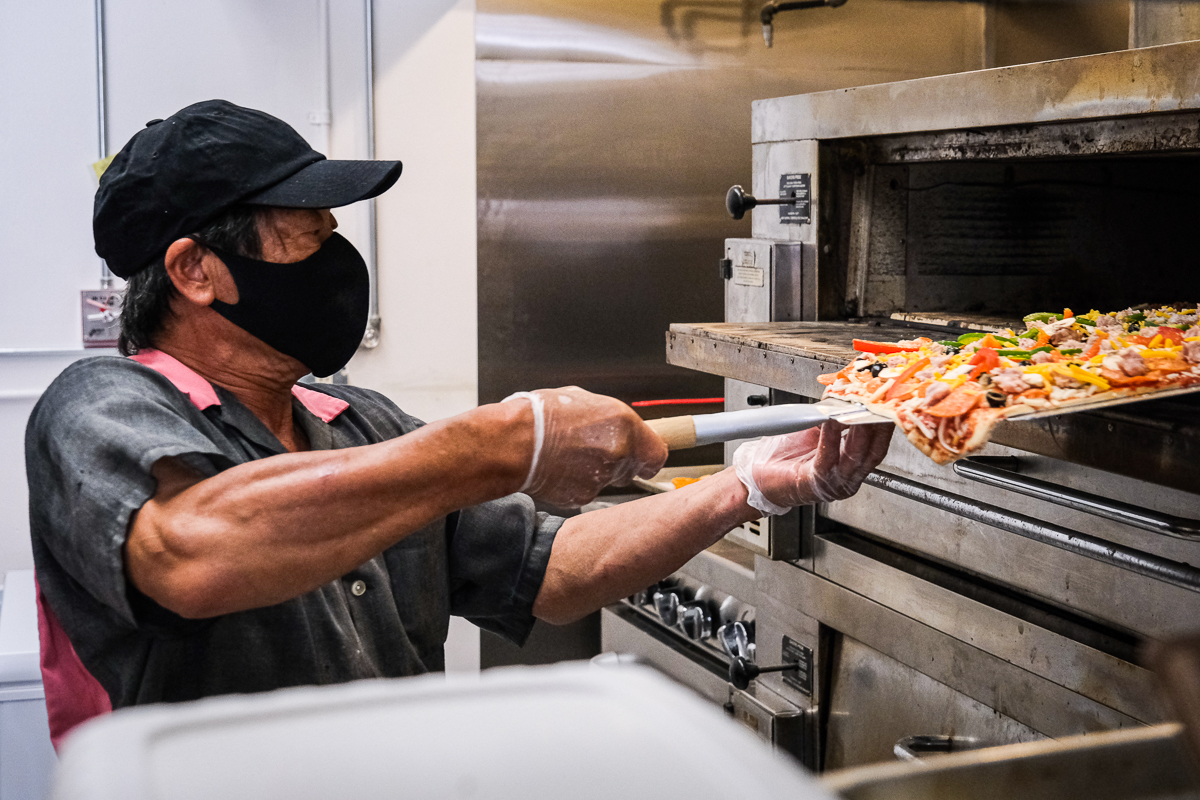 Blackwell’s commercial kitchen space on Winam Avenue, home base for her catering company, transitioned into Magoo’s new kitchen over the summer. Recipes were busted out of the vault and work began on recreating the original taste so many of us remember, thanks in part to her uncle, Glenn Sakaguchi, who ran Magoo’s Waikīkī restaurant for decades. He’s now working the deck oven along with Blackwell’s brother Gilbert “GJ” Sakaguchi Jr.

The menu, Blackwell promises, is true to the original Magoo’s. Pizzas come in five size options from Baby (8-inch round) to Giant (16-inch square) on Magoo’s signature cracker-thin crust; crisp and juicy oven-roasted chicken and cheesy hot subs are all there.

The Combo ($9.95 to $29.95) is by far the most popular pizza, loaded edge-to-edge with pepperoni, pork sausage, olives, bell peppers and mushrooms. The Giant is the only square pizza, 16 inches across and filling all corners of a pizza box. People especially go for the corner slice, because those are just the best, right?

Eat the pizza when it comes out of the oven and you get a crispy, layered crust that borders on lavosh. Years of seasoning on the oven contribute to the flavor. The secret pizza sauce recipe is sweet and acidic and the four-cheese blend is heavy-handed—I fill up after only a couple of slices. 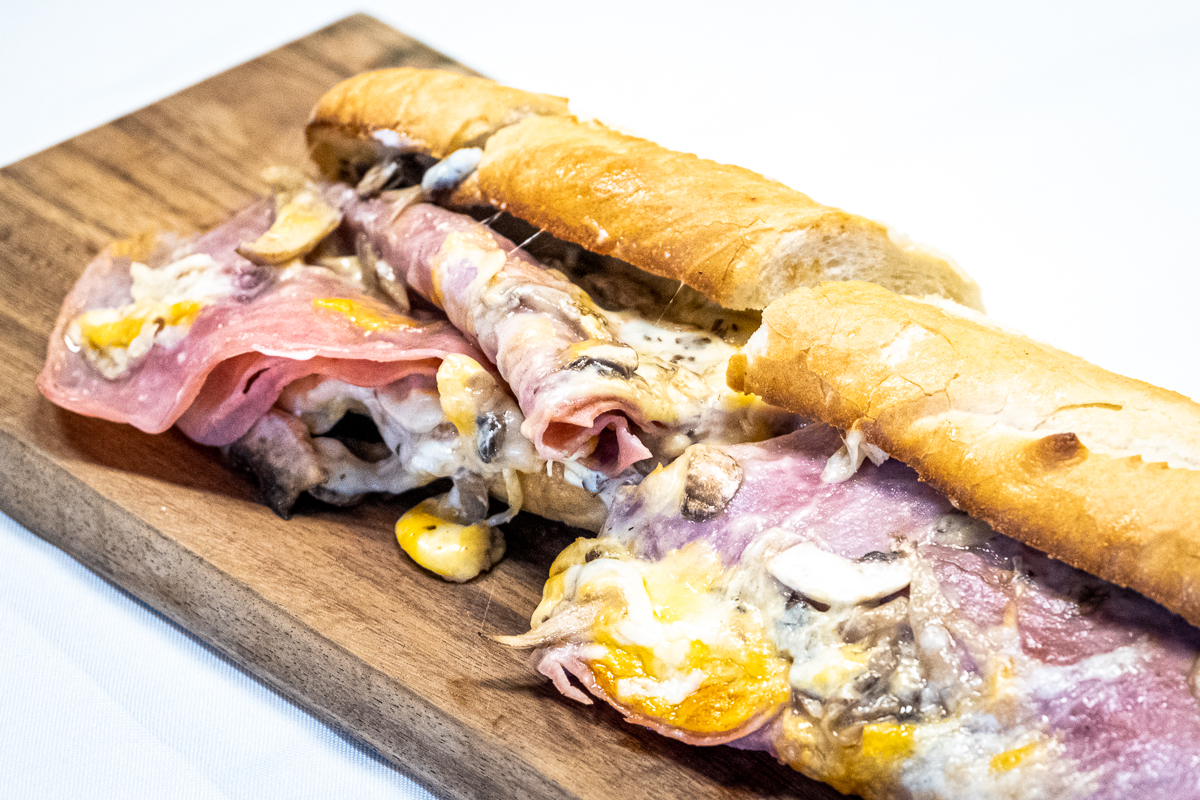 The shockingly simple hot ham and mushroom sub (half for $8.95, full $15.95) is Magoo’s most popular nonpizza item. Thin deli ham, sliced white mushrooms and Magoo’s cheese blend are heated in the oven while a baguette gets lightly toasted. The ingredients are married in one swift motion with a generous spackling of mayonnaise and mustard. Swaddling the sandwich in foil steams the bread, meat and cheese during transport. The resulting gooey mess can only be described as ugly delicious. 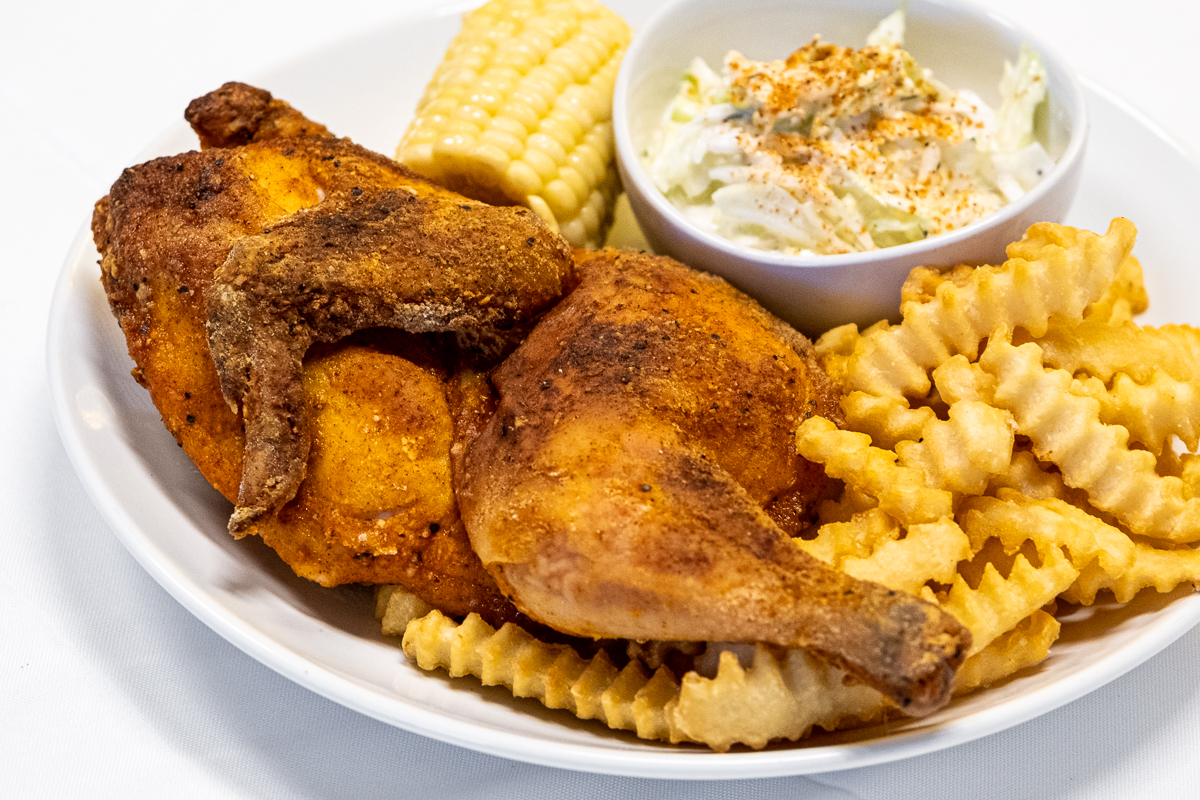 This is my family’s go-to and it’s pretty close to what I remember, just a little skinnier. The taste brings me back to Friday pizza nights when we would order from the Waimalu location. We would only get pizza and subs, so it’s nice to discover the oven-roasted chicken dinner ($11.95) of half a chicken, crinkle fries or rice, coleslaw and corn on the cob. The chicken is insanely juicy and the seasoned skin gives me school lunch vibes. It’s a classic; I would have enjoyed it then as I do now.

The memories made with food are so deeply embedded in our emotions that things we might normally critique are glossed over in favor of revisiting the good times. Magoo’s isn’t striving to be any other pizza. For many, it’s the atmosphere we associate with the simple pie that we love the most. Whether we remember it from the lively Waikīkī restaurant on Kalākaua for post-party grinds, or whether our parents introduced it to us when we were kids, Magoo’s pizza is woven into the fabric of our nostalgia. 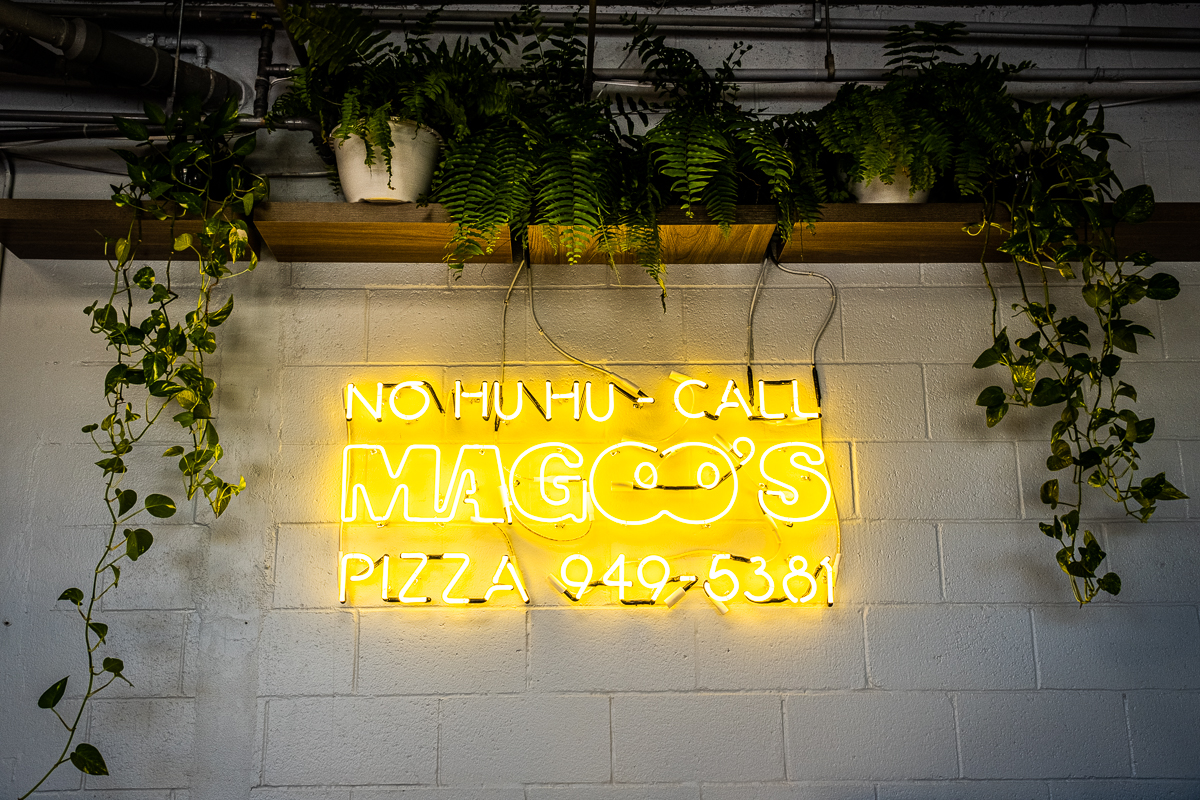 Blackwell told me that opening weekend was crazy busy, not only because response was overwhelming, but because folks picking up their orders felt the urge to share stories about Magoo’s. I believe her because nearly everyone I talk to has their own Magoo’s memory—I could probably start a documentary with them all.

This iconic pizza shop, no longer a distant memory, is open Friday through Monday for now, though hours may increase in the future. Also for now, takeout is the only option.