The Haute Cuisine Chef and His Haute Gummy Bears

Colin Hazama brings years at the top of the culinary scene to bear in his hit gummy bear series. 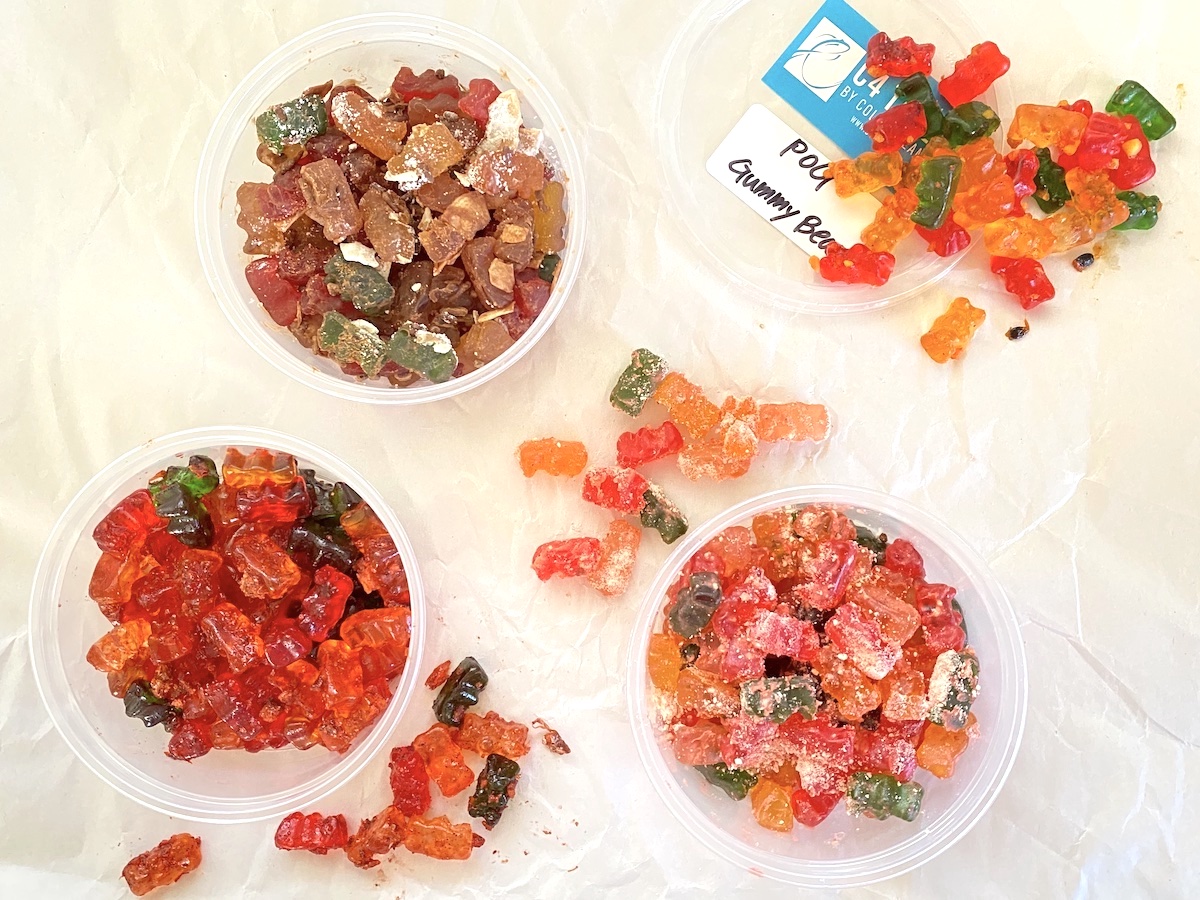 I have a theory that the local snack scene’s best (or worst) kept secret is the sheer number of adults who are addicted to gummy bears. I know seven—and I know with equal certainty that even more lurk in my circles of family, friends and coworkers, it’s just I haven’t asked. Look at what’s happening at Colin Hazama’s C4 Table, the haute cuisine takeout and catering business he launched after his job as executive chef at The Royal Hawaiian disappeared in the pandemic. Hazama is among the elite chefs who appear regularly at the Hawai‘i Food & Wine Festival. He trained at Michelin-starred Jean-Georges in New York City, opened that chef’s restaurant at the St. Regis Princeville Resort on Kaua‘i and guest-cheffed at the James Beard House. Tickets to his Epicurean Journeys dinners at The Royal Hawaiian, 65 to 70% of whose ingredients he sourced locally, started at $150. And Hazama’s runaway hit at C4 Table are his gummy bears.

These aren’t just li hing or lemon peel gummy bears. He started with Li Hing Yuzu Lemon Peel gummy bears, which he created for fun but which his sister proclaimed good enough to sell. They were followed by Chocolate Haupia, and then Li Hing Strawberry Guri Guri gummy bears. And then came his POG gummy bears. That’s when things started going crazy. “Everybody’s asking for the POG. They’re asking where are you? Where can I get it?”

POG isn’t just dehydrated passion fruit or liliko‘i, orange and guava, of course. Hazama spent childhood summers on Maui and remembers the exact flavors that captivated him—not the POG juice we drink today, but what he calls “the actual POG from Haleakalā Dairy.” So he makes a syrup from fresh liliko‘i and adds natural food starches to make it jammy. He creates an orange sugar by adding dehydrated orange peel and zest. He buys dried guava peel from Sing Cheong Yuan Bakery in Chinatown and processes it with a hint of li hing powder for the umami. Finally, he glazes the gummy bears with the liliko‘i jam and tosses them in the orange sugar and dried guava peel. “I probably experimented with this one a week or so. I just kept playing around with the flavors,” he says. “It’s like it’s just gummy bears, but when you taste it, it has that nice sweet and sour taste.” Tiny bits of guava peel cling to the gummies and with occasional crunches of pulpy liliko‘i seeds, the candies taste weirdly more real than POG.

For his Strawberry Guri Guri gummy bears, Hazama cooks down fresh strawberries to make a glaze, then folds condensed milk and powdered milk into the cooled syrup (“like when you go to a shave ice store and they make their own creamy strawberry topping”). The Tasaka Guri Guri flavor he remembers gets added in a powdered topping that starts with freeze-dried strawberries and milk powder. Chocolate Haupia gummy bears start with a syrup of cocoa powder, simple syrup and milk powder and get tossed with chocolate sprinkles, toasted coconut flakes and coconut powder. All the flavors are created to be as shelf-stable as the gummies themselves.

A post shared by C4 Table by Colin Hazama (@c4_table)

All this has created a new problem for Hazama. He’s working on a new flavor—local mango with Hawaiian chile pepper and kaffir lime, inspired by Mexican candies—but having just dropped off nearly 70 pounds of gummy bears in two weeks to Sing Cheong Yuan, which sells them in bags, he almost hesitates to add more because people request the entire series. This is in addition to the $15 to $24 takeout dinners he sells at the Tuesday Kaiser High School PTSA Farmers Market and Wednesday afternoons by pre-order in the parking lot of M by Chef Mavro, and private caterings where he prepares dishes like butter-poached lobster with mint pea risotto and fresh shaved Périgord truffles. “Working in the hotels all these years and cooking for thousands of people, I made half a million dollars in one event. I’ve seen and done things that your average chef or person hasn’t seen. It was a crazy time,” he says. “I like this more simple, homey aspect while still providing food that people can’t really make at home, even though it’s in to-go containers. You actually have to be more creative in to-go containers is how I see it. If you do something that’s a little different, more unique, that’s what people are looking for.”