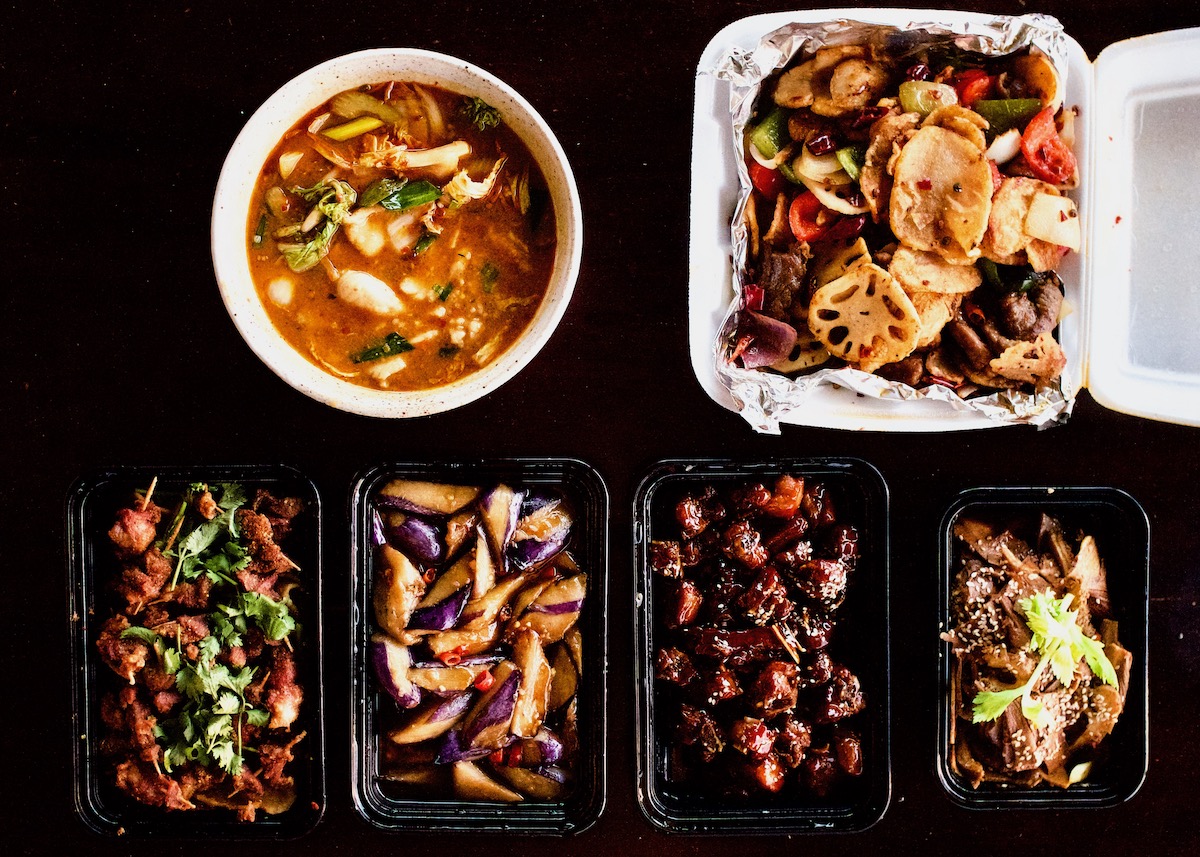 The Chinese phrase for crisis (危機) is composed of the words “danger” and “opportunity.” In the time of the pandemic, Amy and Sean Drew embraced both, selling their home in Vegas overlooking the Strip and moving to Honolulu to open a Sichuan restaurant. They arrived in October 2020, completed a full renovation of the former Tanioka’s pop-up space at Ala Moana Center, and opened SXY Szechuan in January.

The space and food are so polished that I mistakenly assumed SXY was a chain based in China. Or perhaps, like Chengdu Taste, which I also love, an offshoot of a mainland restaurant. But no, the vibrancy of flavors and balance of textures in the dishes belie the couple’s relative inexperience in restaurants. Toothpick lamb ($19.99) consists of lean lamb interspersed with fatty bits, fried and embraced in cumin’s warmth. Each piece of lamb is skewered by toothpicks—the effect is the best of grilled kebab and fried worlds, and eminently snackable. The Sichuan dry pot ($19.99) is my favorite dish so far (I intend to eat my way through the entire menu). What could have been a rather mundane stir fry of beef (or other meat of your choice) with bell peppers and onions and chile peppers, turns delightful with crisp slices of lotus root, supple and crunchy wood-ear fungus, deep-fried potato chips and whole green Sichuan peppercorns, citrusy and numbing. A glossy fish soup, its broth fortified perhaps with fish bones, is lightened with vinegar and just-cooked Napa cabbage. It’s described as fish fillets in Sichuan chile sauce ($19.99) on the menu, but it’s mild enough that my friends plan on ordering it for their children next time. I suppose to some Chengdu natives that would be a negative, but I appreciate the touch of heat that acts as a harmonizer here rather than the diva.

While Amy has hired and trained cooks to work in the restaurant, she makes all the sauces to ensure their consistency and flavor. She moved from Chengdu to Vegas in 1995 as part of a Chinese acrobatic troupe, but she said that she always loved to cook. Her friends and family—as they are always prone to do, not understanding a thing about the restaurant business—would tell her to open a restaurant. So she did, once, with her then-husband, but they parted ways. She worked as a dealer at various casinos, including Binion’s Horseshoe, where the World Series of Poker began, and where she met Sean, a casino manager. They were planning on retiring in Honolulu eventually to be with Amy’s sister, a real estate agent and also a partner in Sakura restaurant in Kapolei—the pandemic accelerated that plan (well, minus the retiring part).

Sichuan’s warming spices are exactly what I’m craving in these chilly, somewhat gloomy times. Even the cold appetizer dishes are a shot of vibrancy, such as the iconic Sichuan fu qi fei pian ($14.99)—literally, husband and wife lung pieces, although there’s no actual lung in it—you can read Wikipedia for the history behind the name. Thin slices of cold beef and snappy tripe are bathed in a scarlet chile oil—this is the hottest dish at SXY I tried. The only item I probably wouldn’t get again is the sweet and sour pork ribs ($16.99)—the sauce was much better with the eggplant ($12.99), which absorbed it like a sponge, while the ribs seemed impervious to it, leaving the interior somewhat bland.

A note on the name of the restaurant: SXY is an acronym of 蜀乡缘, or shǔ xiāng yuán—its meaning rather poetic, roughly translating to “Sichuan hometown connection.” The first time I saw SXY, I assumed it was short for “sexy,” obliterating the original meaning, from sentimental to salacious—but maybe that’s the Drews’ years in Vegas coming through.