Since its opening in 1997, the O.G. omakase restaurant never offered takeout. Until now.

I hadn’t been to Sushi Sasabune in a long time—the omakase stalwart, which opened 23 years ago and was likely the first omakase sushi restaurant in Honolulu, had fallen in the shadow of flashier newcomers. But I’ve returned to old favorites during the pandemic. Of course, $30 for the takeout sushi bento, about a quarter of the price of Sasabune’s dine-in omakase, definitely boosted my motivation. It is now my favorite sushi takeout, and one of my favorite takeout options, period.

Chef/owner Seiji Kumagawa varies the 11-piece nigiri and six roll bento slightly, but just as for dine-in, he seasons and garnishes almost every piece to be one complete, perfect bite. (I can almost hear him in my head saying sternly, “No shoyu!”) Akule is marinated in a garlic herb oil and then torched slightly, local snapper’s sweetness is highlighted with a pickled onion and shiso relish, a plush scallop is dabbed with a dot of yuzu kosho. The fish version of bacon arrives in a nigiri of cold smoked aku brushed with a soy sauce also smoked in house. Only the rolls need a little dip in the provided shoyu—albacore the first time I ordered and negihama the second. 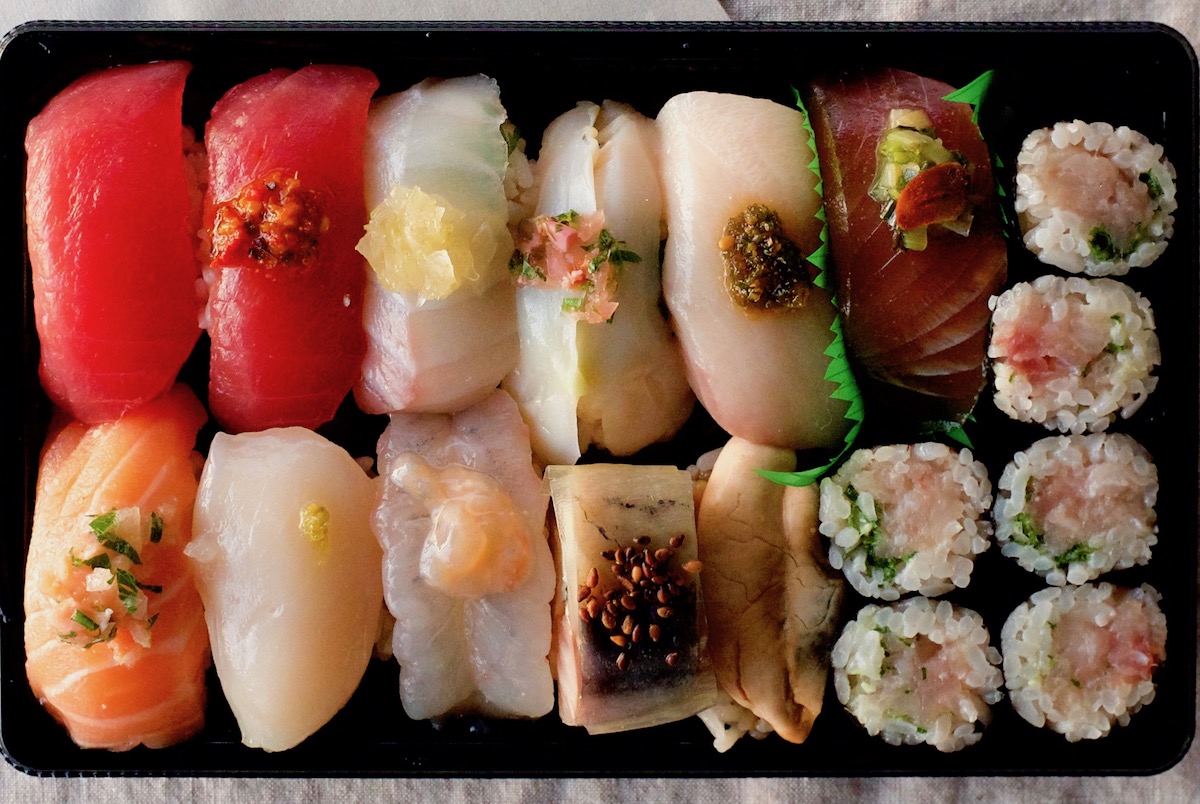 Like many restaurants, Sasabune has had to rethink almost everything during the pandemic. “We’ve been open for 23 years in Hawai‘i now,” says manager Tate Tanaka. “During that time, we have never ever done takeout at all. Even if customers are eating here and want takeout containers, we don’t even have them. But we had to make changes unless we wanted to close down completely.” Tanaka flipped through container catalogs to find something suitable, while Kumagawa had to rethink many of the sauces so they wouldn’t soak into the rice in transit and cause each nigiri to crumble.

Fish procurement was difficult, too, with fewer planes coming from Japan and “fish companies weren’t selling as much, not bringing in as much product,” Tanaka says. “Luckily we use a lot of local fish.” Throughout the pandemic Sasabune offered fish including opakapaka, hapu‘upu‘u, opelu, akule and halalu (young akule), as well as aku and bigeye tuna. During the first shutdown, Sasabune charged $50 per bento and offered more expensive seafood, such as blue crab in the rolls. But during the second shutdown, “$50 is kind of hard for people,” Tanaka says. “So chef thought about it, rearranged a few things, got different products, dropped the price.” Early in the second shutdown, the bentos were so popular I had to reserve one for two weeks out. Even so, given the price point, Tanaka says they’re finding they’re doing more than twice the work for less than half the revenue. And these days, they’re juggling both the takeout and dine-in.

“We built a system out of nothing,” Tanaka says. “And try to make it work. Luckily it kinda did. It was challenging. It’s still challenging.”