You‘d be amazed at what goes on between the nori sheets at Waikīkī’s Spam musubi specialist. 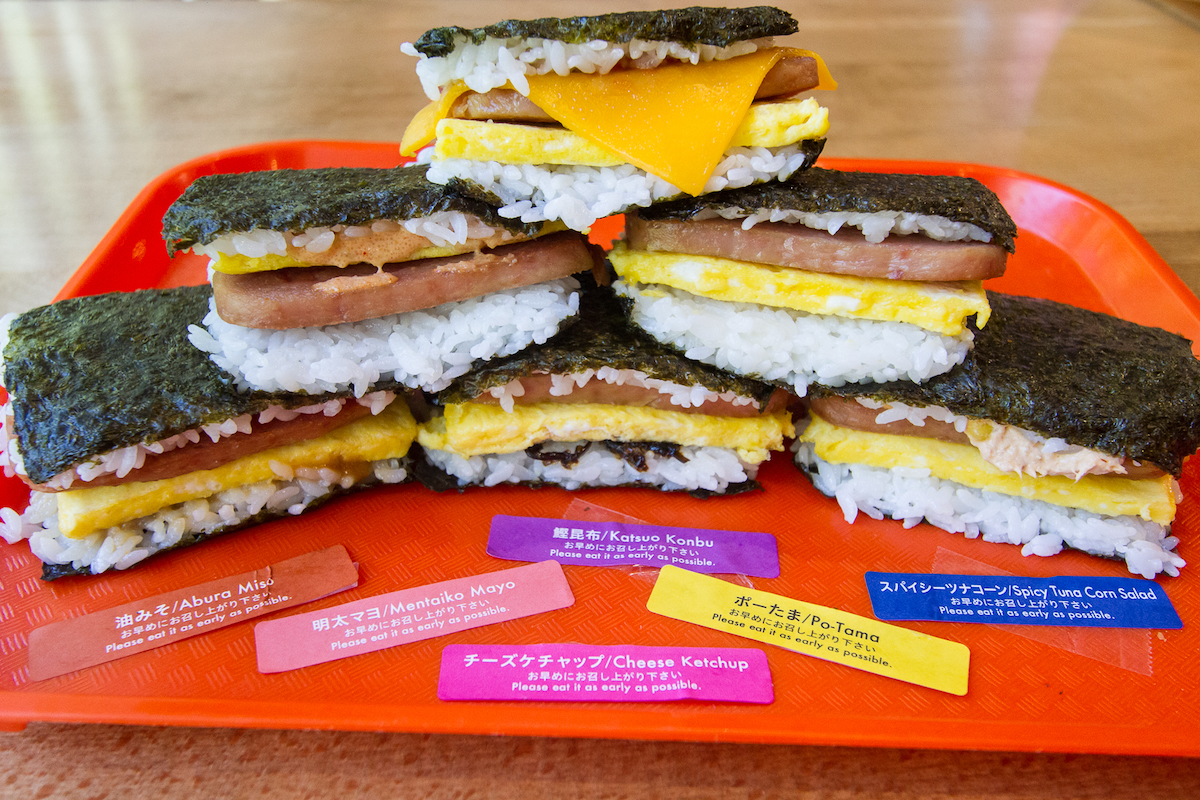 Ever since Potama opened at Royal Hawaiian Center’s Waikiki Food Hall at the end of 2019, I have become slightly obsessed with the luxe Spam musubis. So much so that when asked for recommendations of what to eat in Waikīki, I find myself recommending Potama more than anywhere else.

For the uninitiated, potama (short for pork tamago onigiri) is the Okinawan version of Spam musubi. It starts with a generous sheet of nori. A layer of rice goes on top, then Spam, scrambled eggs and other tasty items are added and the whole thing is folded over, resulting in a sandwich-esque musubi. Larger and more decadent than the stuff you find at local convenience stores, potamas cost $5 to $8. Luckily, there’s a $25 sampler pack of six $5 potamas. Ever the curious eater, I decide to try a sampler and rank the six, for research purposes of course. 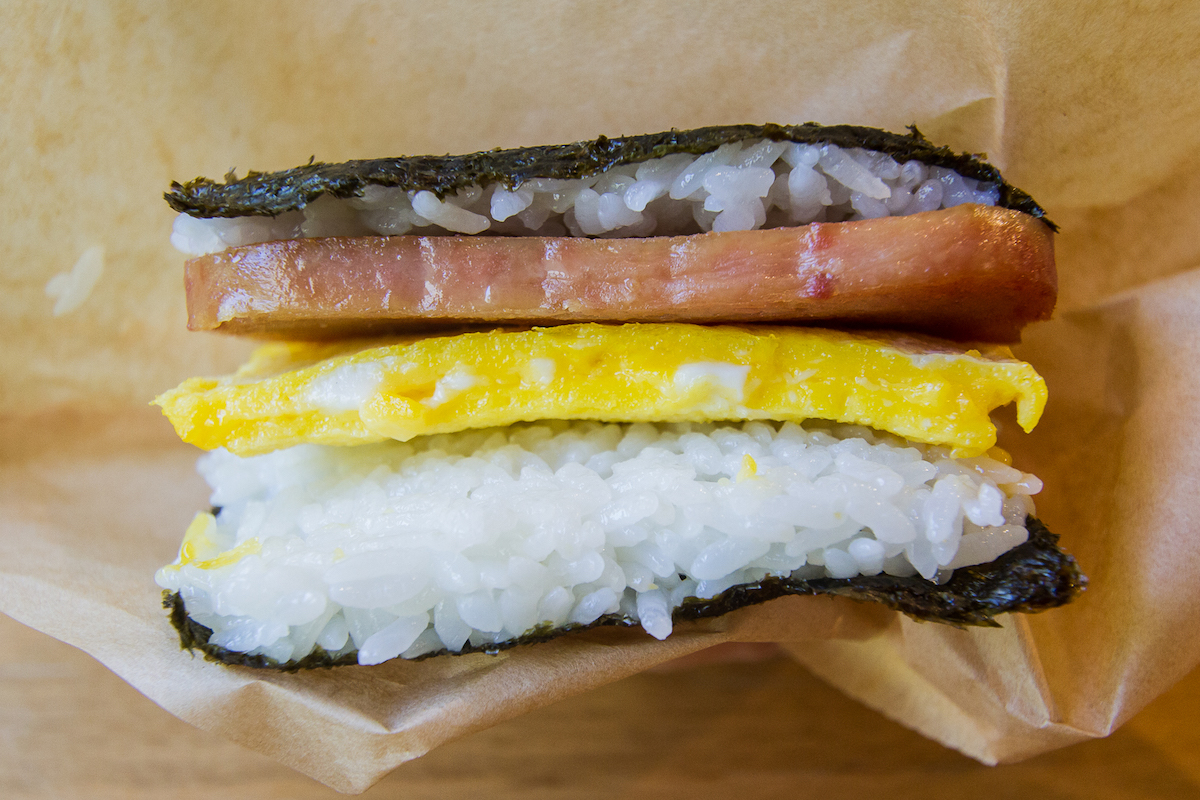 This is as simple as it gets: rice, Spam and egg wrapped in nori. Except the Spam is just barely cooked so it’s warm, but not seared. Like most locals, I like my Spam with a seared crust, so that much of the fat is rendered and brown, crunchy bits provide a salty, unctuous pop. If you like musubi that’s simple and texturally one-note, this is the one for you. I wasn’t a big fan.

No. 5: Spicy tuna and corn salad 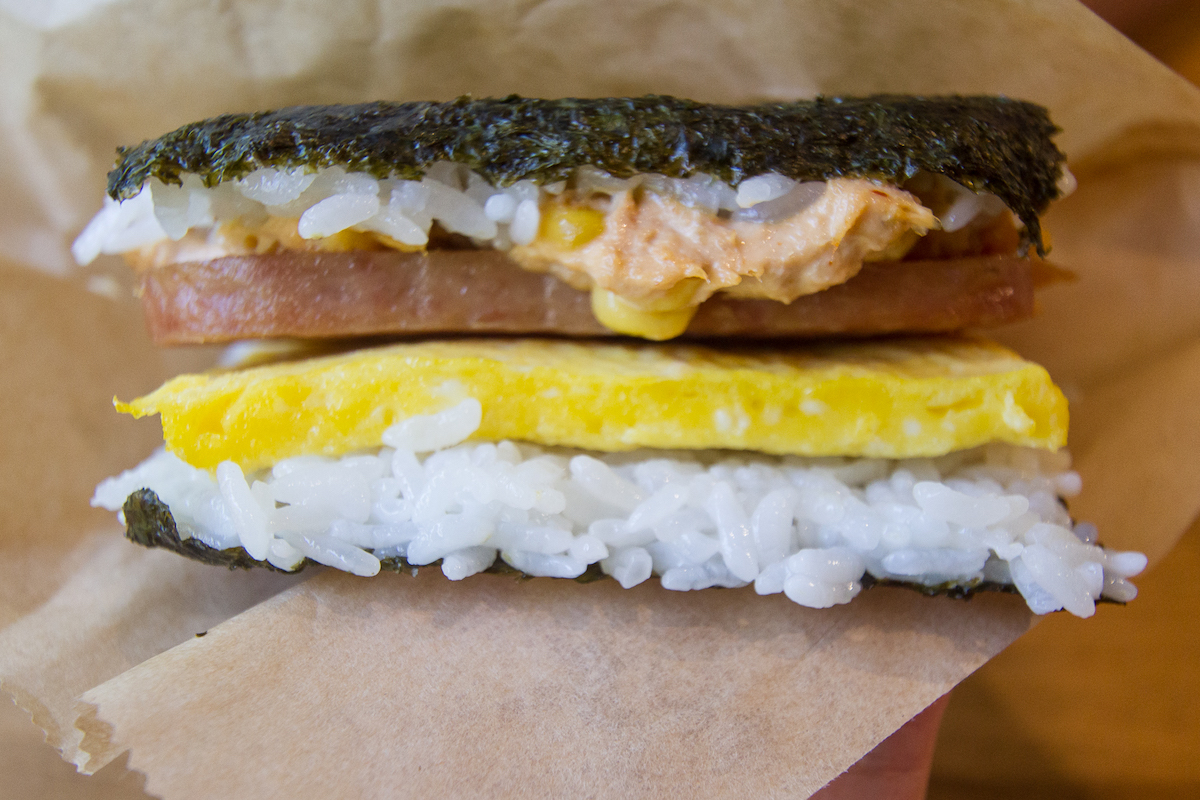 I love the combo of tuna and corn when I’m in Japan. Mixed in a pasta or atop a pizza, the pop of corn and strong presence of tuna salad work well together. In this potama, while tasty, the combo doesn’t quite deliver. The spicy tuna salad, heavy on the mayo, is more spreadable than chunky. The corn is noticeably absent from the party, with only a few kernels showing up to say hello. Overall, this is a decent musubi, but I would appreciate a stronger corn and tuna presence. 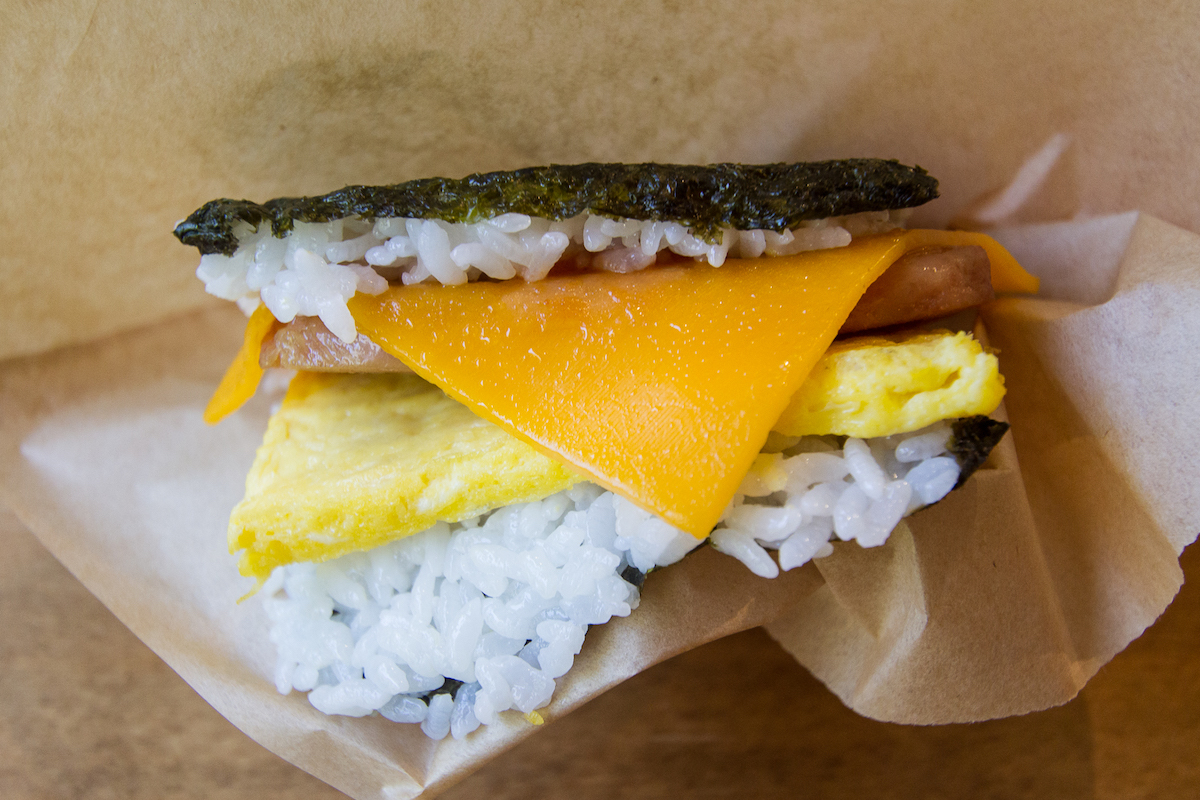 Instantly recognizable as a deconstructed Spam-and-cheese omelet with rice, aka a Spam-and-cheese omurice, this is the favorite potama of my son, a huge ketchup fan. Since all the potamas are made to order, the cheese is still firm. I recommend letting it sit for a few minutes to soften around the warm Spam and egg. This is a delicious, comforting and familiar experience. 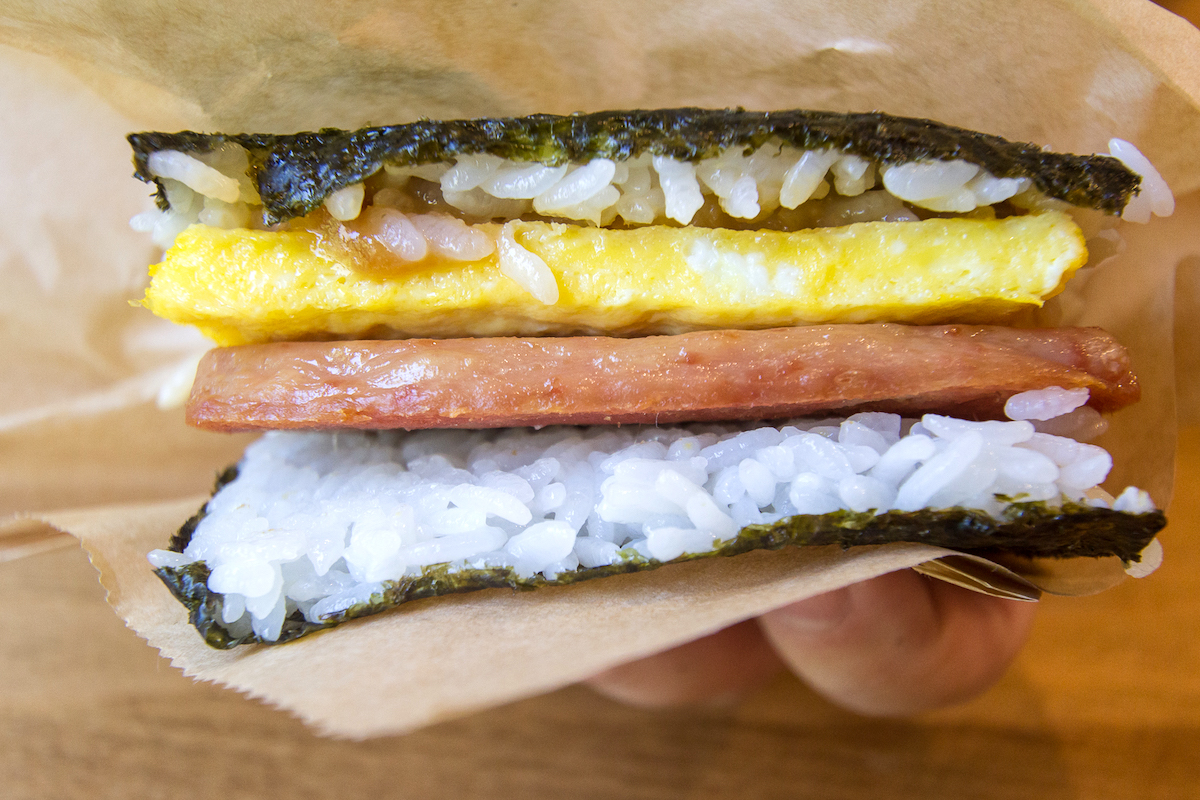 A true reflection of the taste of Okinawa, abura miso (fatty miso) incorporates bits of pork back fat, miso, ginger and sugar into a condiment as common to the Japanese island as ketchup is to Americans. I love how its sweet umami complements the salty Spam and can see why this is such a beloved part of Okinawan culinary culture. 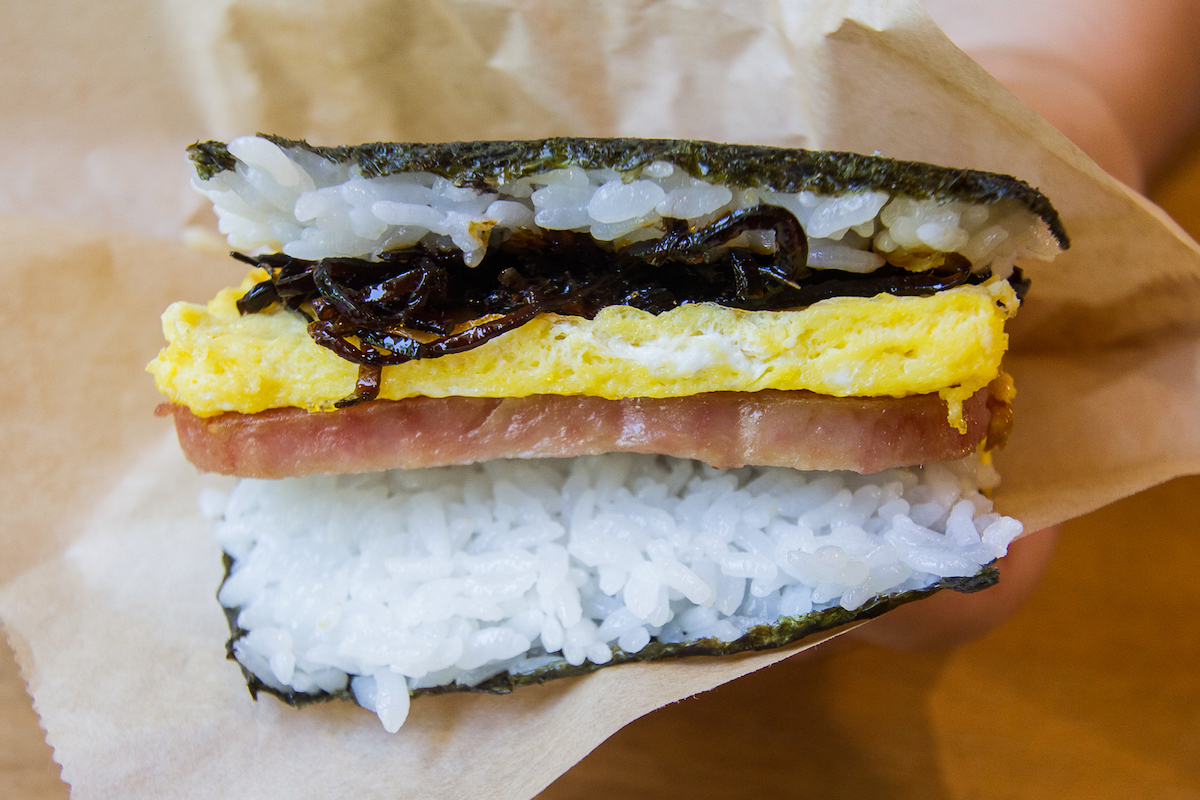 Katsuo konbu is finely julienned kelp that is braised in a sweetened bonito stock until it’s equally sweet, salty and savory. Like furikake, it is a topping primarily made to pair with rice. This makes it a perfect addition to other players in the potama dojo. What ranks katsuo kombu second on my list is its texture: Aside from the scant corn in the spicy tuna and corn potama, this is the only topping in the sampler that provides a texture contrast. Everything else on this list keeps the onigiri soft and fairly homogenous, but the addition of konbu adds a slight sweet-salty crunch that is just delightful. 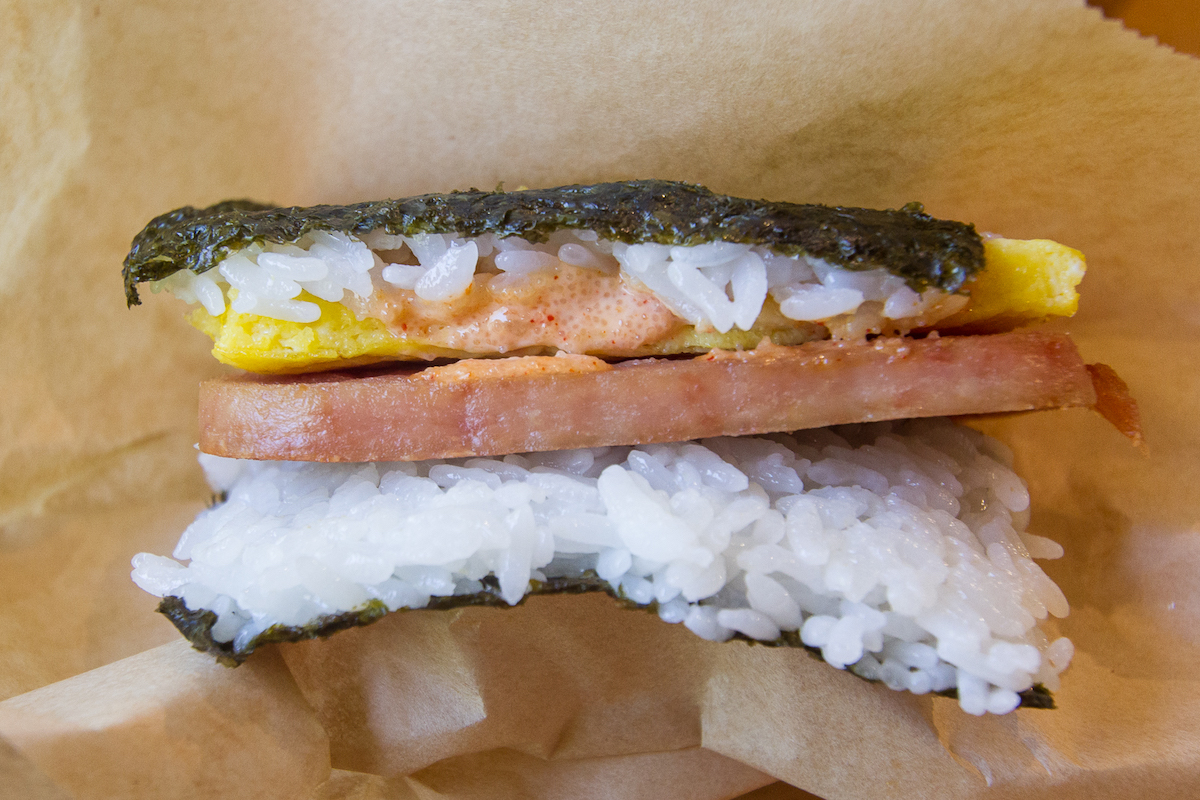 I’m a pretty big fan of mentaiko or marinated pollock eggs, which are similar to marinated salmon roe but much smaller and more intense in flavor, with a spicy kick. How much my mentaiko leaning plays into this potama’s No. 1 ranking is up for debate, but what is undeniable is its creamy brininess. The mayo adds richness and mentaiko comes to play as well, standing in front of the Spam as the predominant flavor and a welcome complement.

Should you decide to try these on your own, know that the sampler is customizable so if you want to get all six of one flavor, you can. I am a little disappointed that the cute yellow box holding the six-pack on the Japanese menu is not available at the Hawai‘i location, where all the onigiris are placed in a white Potama-stamped bag. Nonetheless, food adventures like this are fun and I look forward to hearing your thoughts after you devour your own Spammy sampler. 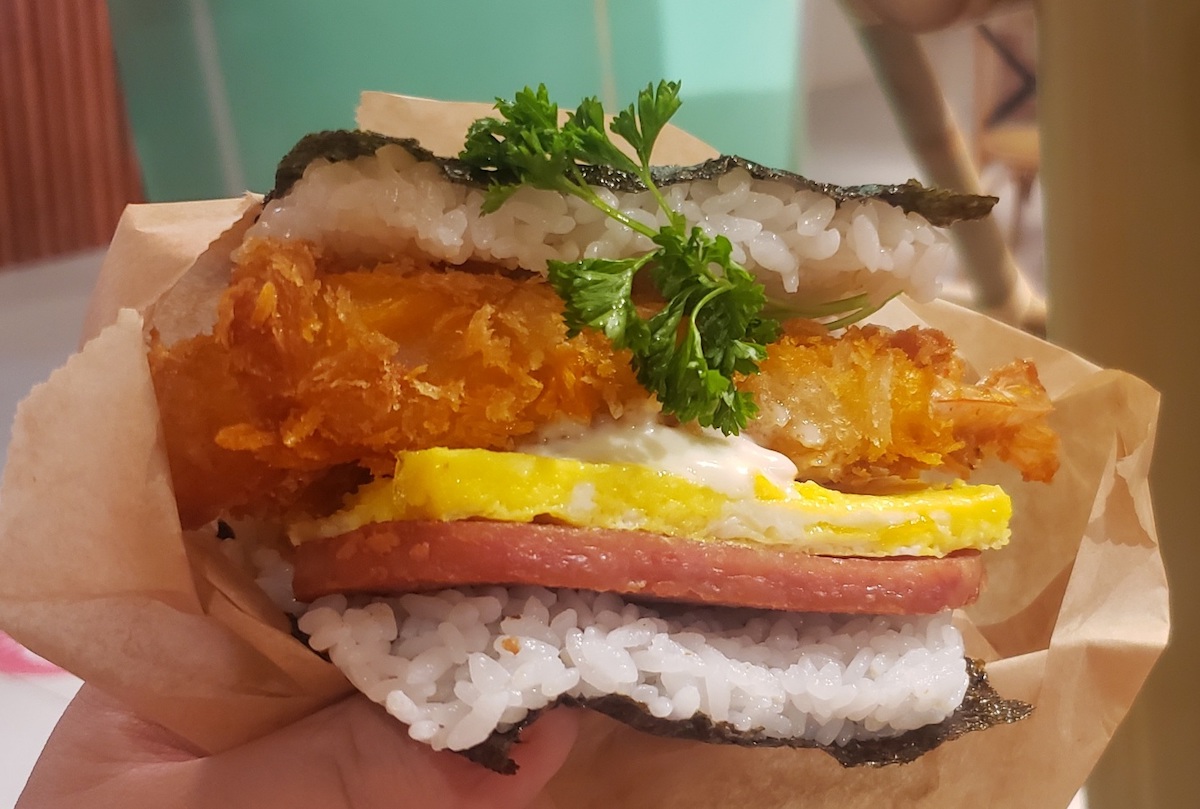 Finally, I cannot go without mentioning my overall favorite onigiri at Potama. The Double Shrimp onigiri adds two fried shrimp to the plain potama along with a smear of mayo. At $8, it is well worth the price, since the perfectly panko fried shrimp add a massive crunch factor as well as heft. It’s the Spam musubi version of a double cheeseburger—one is enough for most people. This is what baby potamas dream of becoming when they grow up.