The Moloka‘i-based photographer talks about her involvement in a new book project ahead of its debut—and what we can do to help with climate change.

July 16 marks the global launch of The Carbon Almanac, a book of facts about climate change and a call to action from more than 300 contributors who believe it’s not too late to make change.

The Carbon Almanac was created by volunteers based in more than 40 countries, from Benin to the Netherlands and Australia to Singapore. But it was on Moloka‘i where film photographer Richie Biluan researched and composed information for the almanac and led a production team to create a three-part digital photo book on climate change. 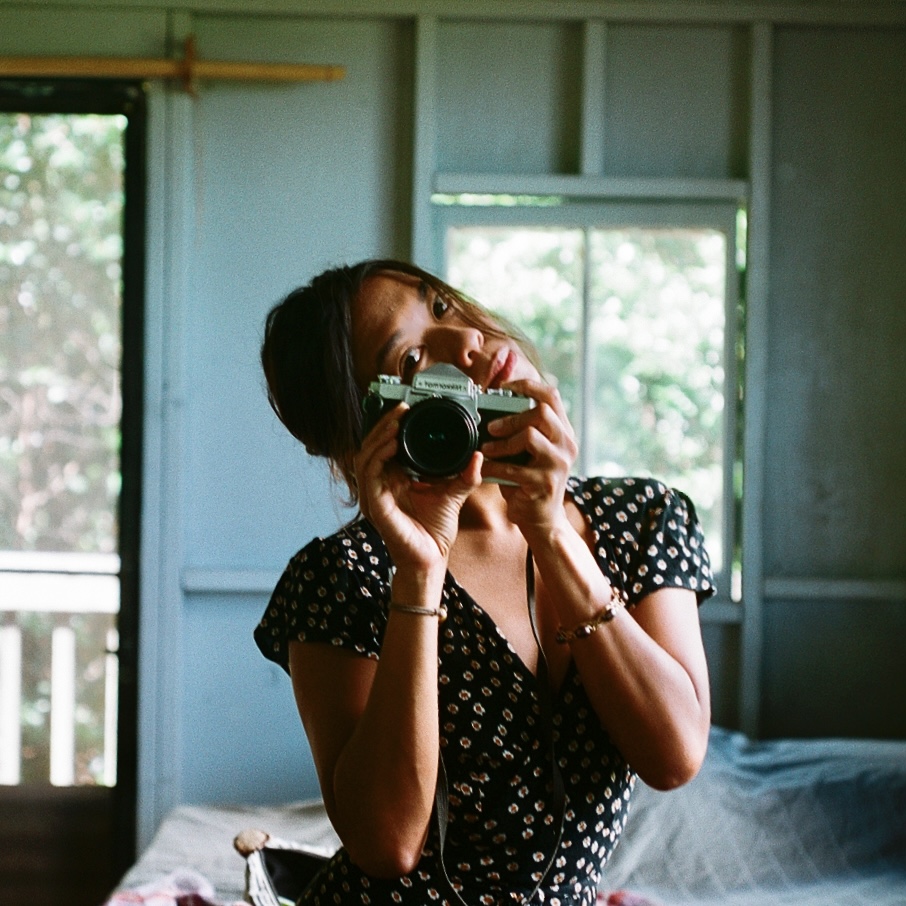 Biluan will sign copies of the book at da Shop in Kaimukī from 11 a.m. to 2 p.m. on July 16 and showcase a collection of 10-by-12-inch black-and-white keiki and baby photos taken over the past three years on Moloka‘i and O‘ahu.

We asked Biluan, who was born and raised in West O‘ahu and moved to Moloka‘i in 2019, what inspired her to join this project and how we can individually contribute to meaningful change.

Q: First, in a nutshell, can you define the problem?

A: The climate crisis has come about because of a communication problem. Scientists have not been empowered to speak the truth. As citizens, it’s been difficult to understand climate change. The almanac is intended to communicate the issues, and the enormity of the issues, in an accessible way.

Four factors contribute a significant portion of the carbon dioxide and greenhouse gases released by humans: coal, combustion, cows and concrete. These “Four Horsemen” account for a projected 70% of the climate change problem. For 100 years or more, we’ve been cutting, burning, tilling and trashing our way to the future. Convenience decides everything.

A: Sixty billion single-use coffee pods were produced in 2018 and 39,000 pods made every minute. There is no evidence that voluntary recycling programs have any impact. In 2019, the production and incineration of plastic produced the same amount of greenhouse gases as 189 500-megawatt coal plants. Fast fashion is another culprit. Food waste is another. Serving meat in school cafeterias every day is unnecessary.

Q: You joined The Carbon Almanac network in its infancy. How did you come to be involved?

A: I responded to an email on [editor] Seth Godin’s daily blog inviting people to be a part of the project. I read it religiously. Three hundred of us were chosen as part of the first cohort. When the book was drafted, another wave of people was recruited for promotion and marketing and more content creation was needed for digital channels. Now there is a free kids e-book, a downloadable photo book in three parts, and a newsletter I contribute to called The Daily Difference. It is a daily nudge to do something.

A: Our goal is to start a conversation, based on facts, around the world and around the neighborhood. It’s not too late. That’s our mantra.

Q: What lessons does Hawai‘i’s ecosystem offer to the rest of the world?

A: Hawai‘i is an incredibly important part of the conversation around climate change. We’re the most isolated place on Earth and it’s sometimes easy to forget there is a climate crisis. In Hālawa Valley (on Moloka‘i), we’re very far off the grid but microplastics are washing up on shore. We are not excluded. There is a drought happening. Living on Moloka‘i, we have much to protect. This feeling is strong in me. We can’t afford to be insular. Everyone’s actions affect everyone else.

On a personal note, my social life almost completely disappeared during COVID-19. The almanac was a huge beacon of hope for me. It made me feel a lot less alone. So often, people feel they are alone in what they care about. It’s simply not true.

A: Yes, it does. I know this is a super sensitive topic in Hawai‘i, but we don’t have the infrastructure to support an endless trove of visitors.

Q: More and more people are talking about eco-anxiety. What does this really mean?

A: There was a doomsday campaign on TikTok recently addressing this negative voice that lays out all the bad things. Biodiversity loss is huge, losing species and habitats is alarming, it’s true. It’s easy to get trapped in this tunnel and not see our way out. To alleviate this sense of helplessness, we need to look at the things that we can do.

Q: What is backyard regeneration?

A: Simply, letting the leaves fall where they may. Shrinking lawns and adding back more native plants. Recreating a natural biosphere instead of making carbon trying to make what isn’t. Do we need Kentucky bluegrass in yards in California? Food microproduction may catch on, and it’s exciting.

Q: What are your favorite takeaways from The Carbon Almanac?

A: As a volunteer, the biggest highlight for me is kindness. In a digital work situation, we were asking everyone to do this book on their own time. The research gave me faith in humanity, and I loved seeing people get their kids involved. Young people ask questions we have trouble answering, and they show us how. Hope is a big takeaway. Initially, there was no direct reference to climate change in the invitation to participate. I am not a scientist or a conservationist, but I feel empowered enough to say you don’t have to be either to make a difference. I had created the myth that I was not qualified. We are all qualified. We live here.

Independent bookstores across the globe will collaborate July 16 to try to break the world record for the most authors to sign a book in person in one day. Come by da Shop from 11 a.m. to 2 p.m. to purchase a copy.

Richie Biluan is a film photographer and freelance content creator. Self-taught, she first started taking photographs as a young teen on O‘ahu, developing film and creating prints in her high school darkroom in ‘Ewa Beach. Her content centers around themes of slowness, self-care and preservation, introspection, and vulnerability.