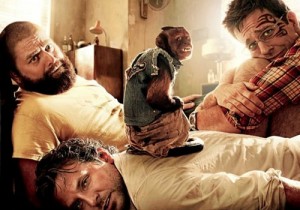 By Myong Choi
Special to Nonstop

How fitting that my first assignment for Nonstop is to review “The Hangover Part II.” I mean, I’m probably the perfect demographic for the film: a young (okay, maybe not that young) male who likes to drink. In fact, I’ve gone to Vegas for bachelor parties several times and have experienced my own “Hangover” moment, not remembering the events of the night before. But that’s a story for another time…

If you’ve seen the original “The Hangover,” you’ll find that the sequel, which opened in theaters Friday, has many similarities. In fact, it’s virtually the same story, just in a different setting. If you haven’t seen the first film, it’s about three friends who wake up the morning after a night of drunken debauchery and have to uncover clues to figure out what the hell happened to them. Kind of like “Memento,” but with strippers and booze.

This time around, it’s Stu (Ed Helms) who’s getting married. His bride to be, Jamie Chung from MTV’s “The Real World: San Diego,” is from Thailand, and that’s where they decide to hold the wedding. The whole gang is invited, including Phil (Bradley Cooper), Doug (Justin Bartha) and Alan (Zach Galifianakis). Knowing what happened the last time they partied before a wedding, they decide to settle for a simple campfire and just one beer. Of course, they once again wake up in a dazed state with absolutely no recollection of what took place the night before. This time, it’s not the groom-to-be that’s missing, it’s the bride’s younger brother.

The film is definitely funny, and all three leads play their parts very well. Phil is the straight guy trying to figure everything out; Stu’s the mild-mannered dentist with a party boy at heart; and Alan is the intellectually challenged tag-along who sees the world in a different way, to put it mildly. This time, more screen time is given to Chow, the Asian gangster played hilariously by Ken Jeong, who steals every scene he’s in.

Unfortunately, the script comes off as a bit lazy. While it’s expected that sequels will dip into the same magic well that made the predecessor successful, the level to which that is done in this film is quite extreme. There’s the lost character, the physical disfigurement, the stripper, the mysterious animal, etc. I wish that they had done something else to the story besides just hit “repeat” in a different city.

Nevertheless, “The Hangover Part II” is still very funny and outrageous. These guys have no shame pushing the comedic line, and I did laugh out loud many times. Make sure to stay for the final credits to see just how wild of a night it was.

“The Hangover Part II,” 102 minutes, Rated R, is playing at theaters across the island