The team behind V-Lounge and Prima return with ‘Ili‘ili Cash and Carry, a hipster bodega with killer pizzas.

My walking route runs along Beretania directly past ‘Ili‘ili Cash and Carry, making it way too easy to drop in regularly. That’s just what Aker Briceno and Keola Rapozo envisioned when they scoped out the former Watanabe Bakery space next to Mini Garden last year. They signed a lease and today the shop opens at 11 a.m. with 18-inch pizza pies, square slices and loaded hoagie sandwiches on house-baked bread.

If you, too, have a weakness for pizza and subs, consider yourself warned.

Briceno invited me to a small gathering where I got a taste of what he had been previewing on Instagram using the hashtag #papi_juans. 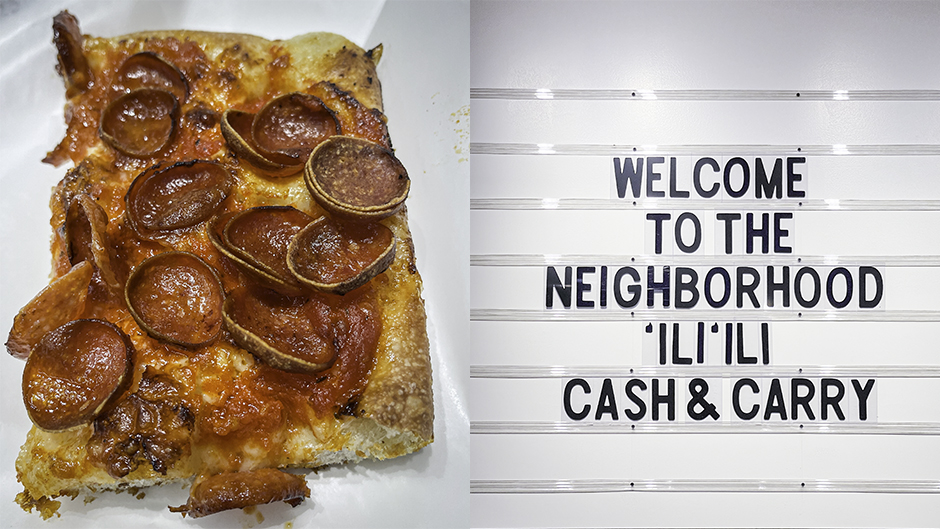 I drift into euphoria with a first bite of Sicilian-style pepperoni pizza ($5 a square), served straight out of the oven. The pan-baked crust has a crisp edge that gives way to an airy center. The sauce bites back with ripe tomato acidity; crunchy pepperoni rounds glisten with spice. 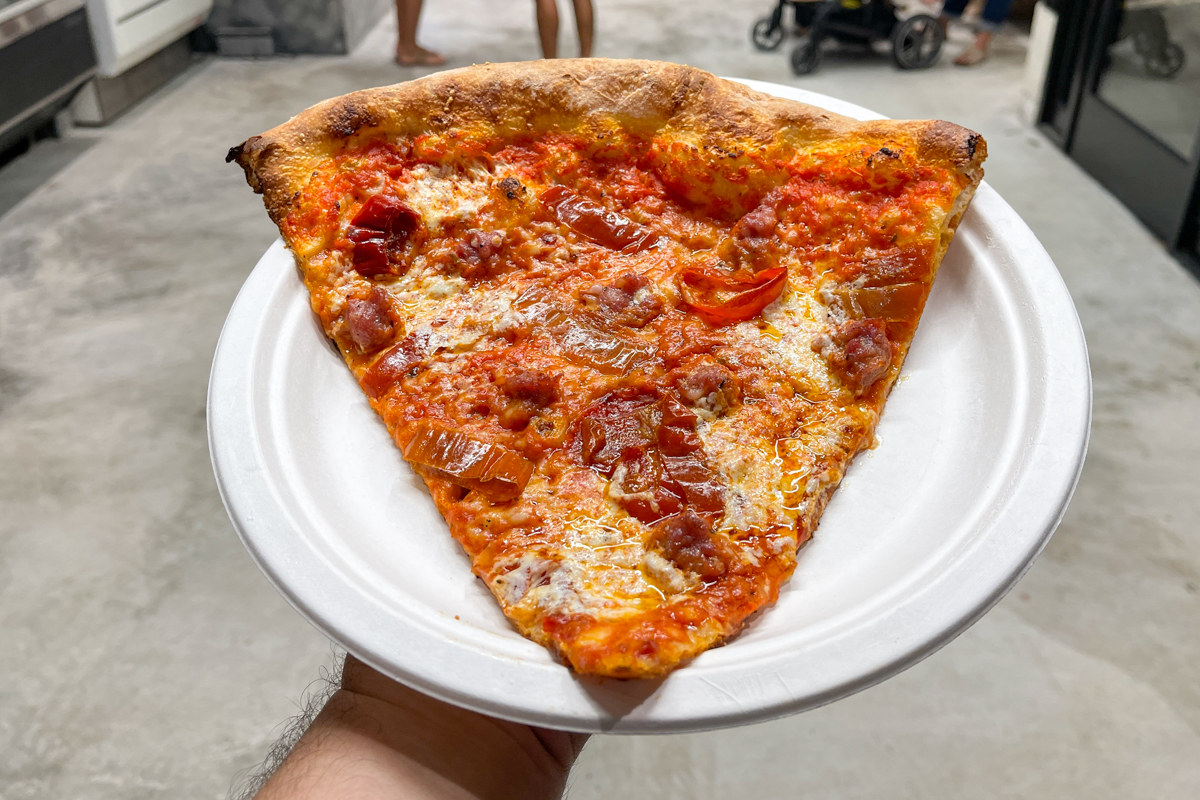 A slice of the Rip City pie. Photo: Thomas Obungen

I snag a slice of the Rip City pizza because I’m told it’s Briceno’s favorite. It’s one-sixth of a massive 18-inch pie and true to what you find in Manhattan—fold the thin crust in half and watch the pizza juice flow. The uncased Italian sausage gets lost in the tangy tomato sauce with stealthy slips of red pickled peppers and splotches of mozzarella. This slice doesn’t seem to go overboard with spice but I do end up dabbing my eyes—of sweat or tears?

SEE ALSO: The Original Magoo’s Pizza Is Back in Business After a Long Hiatus

V-Lounge was the pinnacle of pizza in this city. It was where I got acquainted with arugula, boquerones and egg yolks on pizza. Then Briceno and Ozawa opened Prima in Kailua with Pai Honolulu’s Kevin Lee, and foodies waxed poetic about the qualities of sauce, dough and cheese in their oven-fired pizzas. They were also behind Whole Ox, a Kaka‘ako eatery that daily sold out its quota of juicy, fatty burgers. Clearly, Briceno and Ozawa have a knack for elevating comfort foods to a level we didn’t know we were starving for.

‘Ili‘ili’s pies feel like an evolution of the V-Lounge and Prima pizzas in a mature, return-to-your-roots sort of way. The pizza menu has staples ranging from $23 to 25 like pepperoni (with “choke pepperoni”), a classic margherita and the Off-White with ricotta, mozzarella and parmesan cheeses, caramelized onions, roasted garlic and herbs.

Specialty pizzas ($25-26) include the Funghi with mushrooms, fiore di latte soft mozzarella and prosciutto cotto; and a Spicy Meatball with mozzarella, ricotta, arugula and chile oil. 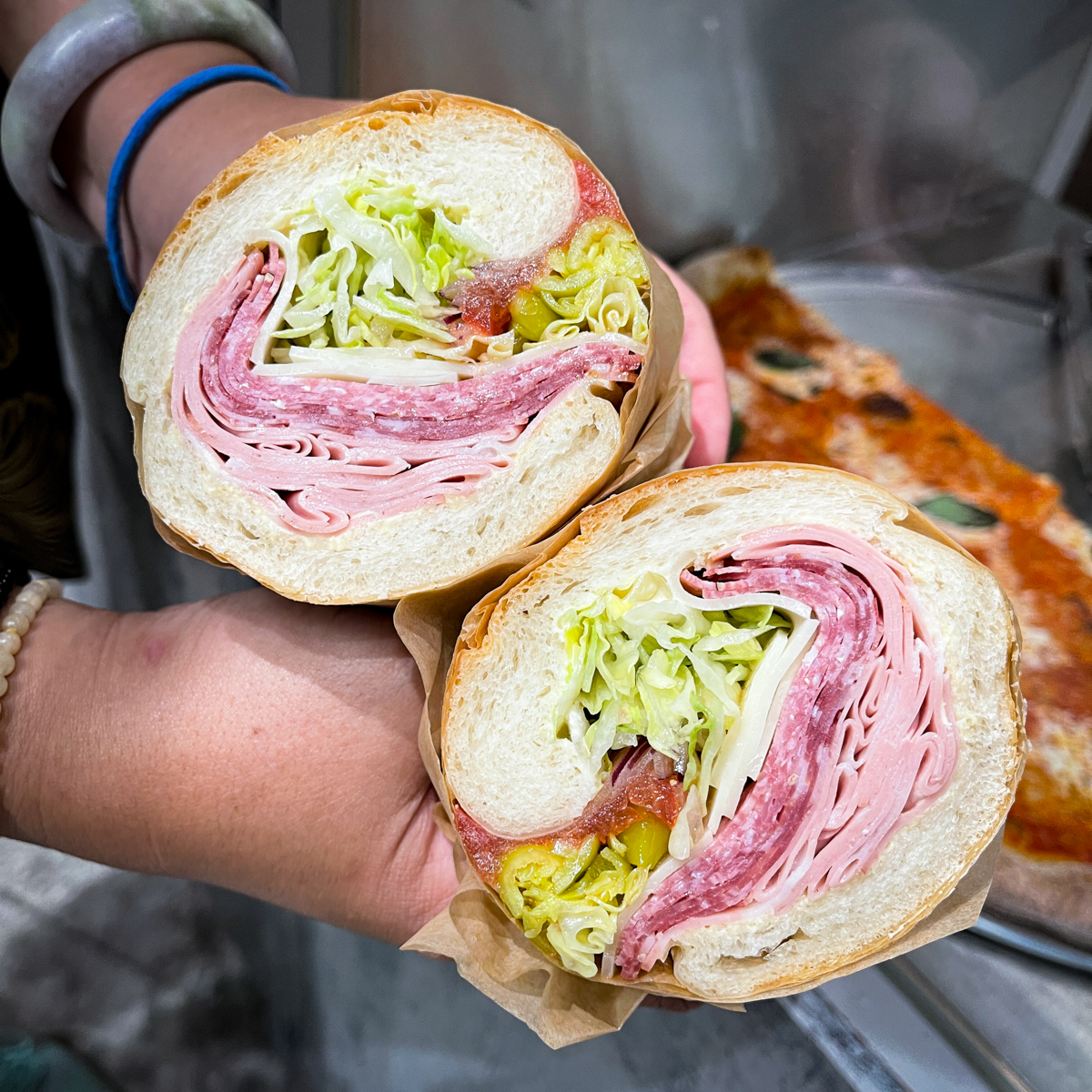 Then there are the hefty hoagie sandwiches of meat, cheese and veg on house-baked bread. A friend and I split Italian and roast beef hoagies ($17 each) to enjoy later.

A cross-section of the Italian reveals a proper hoagie—thin layers of salami, mortadella and soppressata, shredded lettuce and vinegary pepperoncini. The bread has a nice chew and holds everything together in a tight package. Half is enough to fill my stomach. 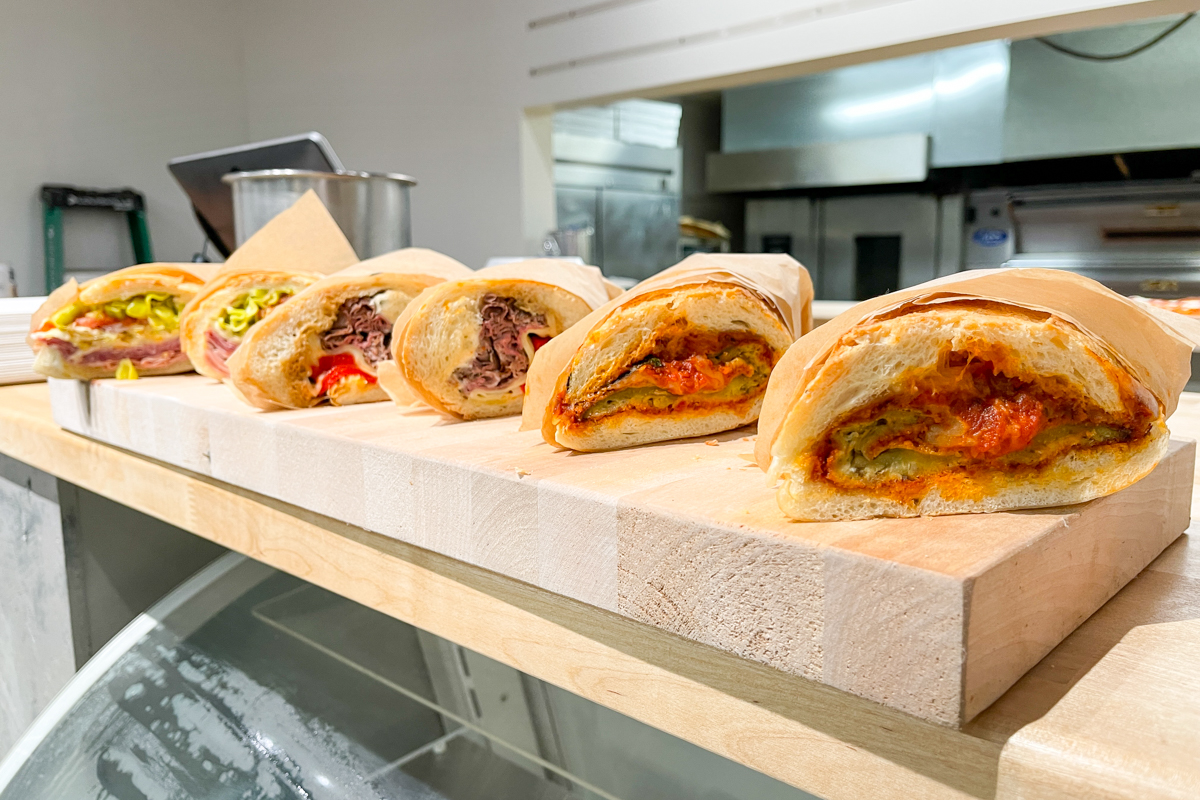 The roast beef sammie is equally satisfying with roasted local beef mounded on the same house-baked hoagie soaked in au jus, with marinated peppers and provolone cheese. A hint of creamy horseradish cuts through the rich beef. Eat this one hot if you can, but it’s not bad after a night in the fridge either.

The shop itself is still evolving. You can think of the ultimate vision as something of a hipster bodega with killer pizza. In coming months, ‘Ili‘ili plans a deli section for local and imported cold cuts, cheeses and other items. When it gets its liquor license, it will sell beer and wine too.

The name itself is a nod to the neighborhood’s past. ‘Ili‘ili, or small pebble in Hawaiian, references the geology of the area downslope of Mānoa Valley, including Mō‘ili‘ili. The cash-and-carry part is an homage to Kumashiro Store, a cash-and-carry grocer that served the tight-knit Mō‘ili‘ili community for generations.

Not that it’s all about yesteryear. Keola Rapozo, designer and founder of Fitted Hawai‘i, is designing the shop’s branding and merchandise. He says ‘Ili‘ili will be a testing ground for anything from skateboards and umbrellas to apparel and stationery. Edible or not, I’m curious to see what will fill the shelves.