My editor, she nevah understand my passion for POG, brah. So I pitched ’em to her li’dis. I told her, “You might be one sake connoisseur. And some people might be wine connoisseurs or beer connoisseurs. Me, I no drink alcohol, but I am one JUICE connoisseur!”

Still yet da boss wuz giving me quizzical lookings, so I elaborated with even more effervescent enthusiasm. I told her, “So for regular non-Meadow Gold brand passion orange guava drinks, da ting typically alternates between tasting like guava for one sip, an’den might taste more like passion fruit, an’den orange. But for real Meadow Gold brand POG, da ratio of da passion and da orange and da guava is such that da ting just does down smooth. Its taste doesn’t vacillate. It decisively tastes like its own ting: POG!”

SEE ALSO: The Best-Selling Local Slurpee Flavors of All Time at 7-Eleven Hawai‘i Are …

I reminded my editor that I had texted her around early June when I first seen one IG reel of POG sorbet flying off da shelves at KTA Super Stores on top Hawaiʻi Island. I told her I wuz one big-time fan of POG so I wen go rush to several stores on Oʻahu for see if I could score me one tub, but to my disappointment I no could find. But I got no sympathy. She did not feel my pain.

I kept checking stores on Oʻahu in July. In August. In September, I came to da conclusion that it must be one KTA exclusive or someting, cuz it had been forevah and a day ovamorrow. Den in October I seen ’em on top my friend @melissa808’s IG. Meadow Gold wuz going release ’em statewide for one limited time in late October. Finally!

When da release date hit, I found ’em at da second market I went to. I posted my find on top my Facebook and lotta people reacted to da price. Honestly, I nevah really look da price till aftah I got home and looked at da receipt. I wuz so caught up in da excitement. I discovered that I managed for get ’em on sale for $13.99. Basically had two kine reactions. People who wuz jus meh about POG wuz curious but dey said wouldn’t pay that much for sorbet. An’den on da oddah hand, had da hardcore POG people who paid full retail $16.99 for da 48-ounce tub, no hesitation. 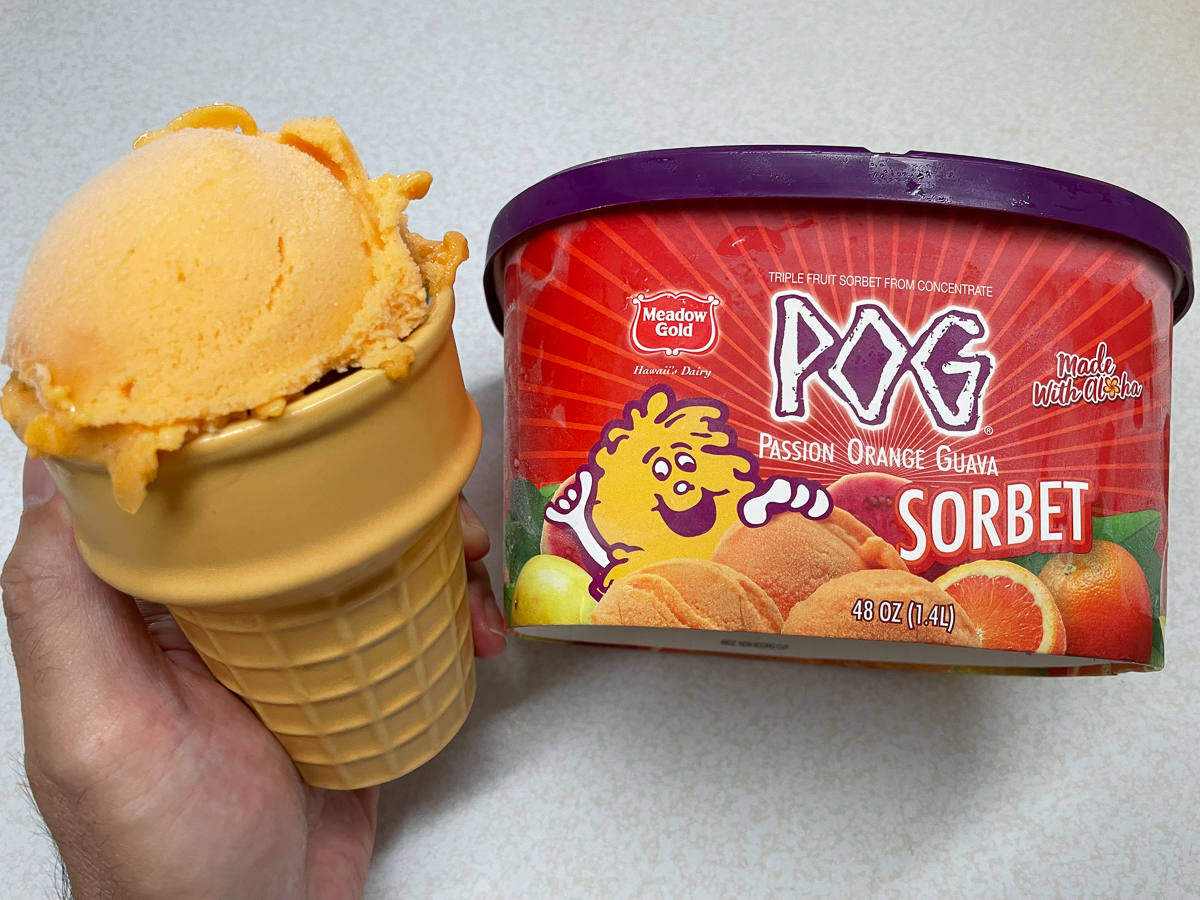 Dis one sorbet so nomono milk products, although I curious what one sherbet or ice cream would tasted like. Dis sorbet passes my real POG test where it don’t taste like guava den orange den passion fruit. It does indeed taste like real POG, but maybe little sweeter and with more tang. It’s one light, refreshing, frozen way for enjoy your POG. Supplies stay limited so get ’em while you can cuz it’s winnahs!

True lovers of POG might shell out $16.99 for try ’em once. But for repeat business and for get people who stay on da fence for chance ’em, I tink dey gotta make ’em little bit cheaper. Oddahwise only people with POG (Plenty Of Green) going be able for afford, li’dat. #nomonomoono